[This story contains spoilers from the Jan. 14 episode of CBS’ Madam Secretary.]

During Sunday’s Madam Secretary, the drama addressed a debate that has been playing out in the media for months: Does the 25th Amendment allow a president to be removed from office if his cabinet deems him mentally unfit? At least in the alternate-future Washington depicted on the CBS political drama, the answer is a resounding “yes.”

First, a quick recap: When the American embassy in Bulgaria is seemingly targeted by a sonic attack that’s traced back to Russian operatives, an uncharacteristically hawkish President Dalton (Keith Carradine) orders his Secretary of Defense (Mike Pniewski) to fire nuclear missiles at the country’s satellites — and then fires him when he refuses to carry out the order. Alarmed by the commander-in-chief’s suddenly unhinged behavior, Secretary of State Elizabeth McCord (series star Tea Leoni) and the rest of the cabinet vote to invoke the 25th Amendment to strip him of his powers, thereby avoiding a potential armed conflict.

Later in the episode, President Dalton’s bizarre behavior is chalked up not to a psychological break, but rather a benign brain tumor that had been pushing on his frontal lobe (ironically, the part of the brain responsible for “executive function”). After his symptoms are temporarily relieved by a course of steroids, he gives an inspirational speech in which he praises his cabinet for being “true American heroes and patriots…[who] put their country ahead of their personal relationship with me.” He concludes: “It’s what separates us from dictatorships and oligarchies. Without people of such courage, our democracy would be lost.”

Amid the deeply divided American political landscape of 2018, that’s a hot-button statement that could easily be interpreted as a warning (plea?) to those in the current Trump administration. Indeed, among the show’s right-wing fans, the potential for outrage is high: last season, an episode that saw President Dalton taking a stand against climate change deniers raised the ire of some conservative viewers. And yet Carradine — who has played Dalton on all four seasons of the political series — denies there’s a partisan agenda at work.

“I don’t think so, only because this is fiction,” the actor tells The Hollywood Reporter. “We are hypothesizing a circumstance that is not directly the circumstance or the conversation that is being had today in all of the media and all of the conversations surrounding Trump. Those are very different issues from what we’re looking at in our fictitious episode here.… The fact is, this is a circumstance where there is a very legitimate medical issue that is at the heart of what’s going on. And that ultimately, the good of the country takes precedent.… Because that’s what we are speaking to, I would hope that any reasonable viewer would appreciate that.” 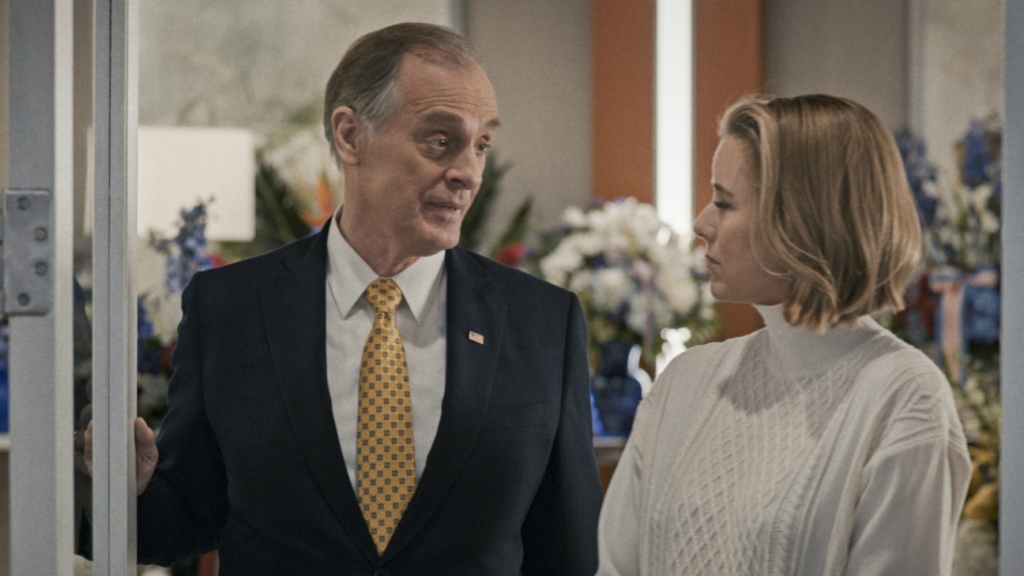 If Carradine’s answer sounds too diplomatic (even disingenuous), it’s in keeping with showrunner Barbara Hall’s stated intention to make a series that appeals to everyone, regardless of how they identify politically. Indeed, Dalton’s own political affiliation wasn’t named until season three, when he ran for re-election as…an independent (though many viewers have justifiably pegged him as an erstwhile Republican). “I think the proof is in the pudding, in that we do have such a broad audience,” Carradine says of the show’s nonpartisan mandate. “And thus far, I think we’ve managed to present our stories and present the positions and the discussions and the problems that need to be solved in a way that doesn’t scream any kind of a partisan position.”

And yet, in a pivotal scene that sees President Dalton making aggressive statements toward Russia during a news conference, one line in particular closely mirrors the rhetoric President Trump aimed at North Korea last summer. “I will tell you this: If we confirm that Russia is behind it, they are going to feel the overwhelming force and ferocity of our military might,” Dalton says. Meanwhile, back in August, Trump said this: “North Korea best not make any more threats to the United States. They will be met with fire and fury like the world has never seen.”

So, is this a case of art imitating life, or just another uncanny coincidence from a show that has become known for inadvertently predicting future events (including, in one case, the Iran nuclear deal)? Carradine claims it’s the latter.

“This script was written before [Trump] said any of those things. So, I’m not sure who’s imitating who here,” says the actor. “I’ve often joked with Barbara Hall and everyone about what kind of deal they have made with some devil somewhere that they are able to do these things and address these subjects and then have them be on the air in such an extraordinarily timely way. It’s a little weird.”

As for Carradine’s thoughts about Trump, the actor, in keeping with the nonpartisan tone of the series, says he prefers to keep his politics close to the vest. “That’s not a place where I want to play,” he says. Carradine was forthcoming, however, on one issue that pertains to the latest episode of his show: the recent statements by a number of prominent psychiatrists that question Trump’s mental fitness for office.

“As a public person, I do think there is a great danger in remote diagnosis,” says Carradine. “It’s one thing to have a person who has actually submitted themselves, or who has actually been personally examined, and has agreed to such an examination and whatever’s determined as a result of such a thing. But for people to speculate — even though they are certainly qualified.… I think that is dangerous, and I don’t think it serves the discussion. I think that we need to keep our wits about us here and not become histrionic in the way we’re looking at something that seems histrionic at its core. I think that to respond to extreme behavior extremely, it doesn’t serve anybody.”

Unlike the political problems of the real world, the serious dilemma at the heart of “Sound and Fury” — the episode’s title — is neatly solved by hour’s end thanks to competent, serious political operatives who have the best interests of the American people at heart. That would count as pure fantasy no matter the era, but in 2018, the resolution feels particularly far-fetched. As for Carradine — who initially termed the series “idealistic” before rephrasing it as “aspirational” — he remains hopeful for America’s future despite the fraught nature of modern-day politics. Perhaps the show’s high-minded optimism has rubbed off on him. “One of the things that I think that our show does is, it’s kind of a reminder of how it can be,” he says. “And I would like to think that it’s a reminder of where we can be again.”