A golden ball arcs overhead, a tight spiral sailing across a chaotic scene of upturned tables and smashed champagne glasses, and falls amid a mob of scrambling, muscle-bound actors stuffed into tuxedos. The struggle is harried, but understandable, when the instigator of the scene is taken into account: four-time Super Bowl champion quarterback Terry Bradshaw.

“He’s still got it,” a crewmember whispers in awe as Bradshaw tosses another pass across the room.

That sort of reverence is shared by everyone who walks onto the set of the NFL’s upcoming Super Bowl spot, a 2-minute ad set to run during this year’s big game that brings together over 50 players to kick off the celebration of the league’s 100th season in 2019. NFL100, as the yearlong celebration is called, will officially launch at Super Bowl LIII in Atlanta this week and will be promoted during offseason events such as the NFL combine in February, the draft in April and the Hall of Fame induction ceremony in August. The events will culminate at next year’s Super Bowl LIV in Miami.

Bradshaw is hardly the only star in attendance on this third and final day of shooting. Los Angeles Rams Aaron Donald and Todd Gurley are both on hand (just days before flying to New Orleans to clinch a victory over the Saints and secure their slot against the New England Patriots in Super Bowl LIII); iconic running backs Emmitt Smith and Barry Sanders toss around jokes and friendly words of encouragement (“You’ve still got it,” Smith yells enthusiastically to Sanders as the former Detroit Lion, now 50, rips off a spin move and puts on a burst of speed); Denver Broncos linebacker Von Miller, decked out in a bedazzled white tuxedo jacket and flat-brimmed Stetson, wraps up 14-time Pro Bowler Tony Gonzalez as he sprints toward a 6-foot-tall wedding cake; Bradshaw lobs passes across the room between takes — and that’s just the activity in a few hours of this monumental shoot.

“When I first got this script I didn’t think it was real,” director Peter Berg tells The Hollywood Reporter as his crew hustles to set up for their next shot (Gurley tossing a lateral to Sanders as Smith cheers him on from a nearby table). “I thought they were joking; they wouldn’t be able to get all these football players together.”

Berg’s incredulity is easy to understand. The commercial, which didn’t even get shooting dates until Dec. 21, brings together a staggering roster of NFL greats, from legendary icons to recent Hall of Fame inductees to current stars. 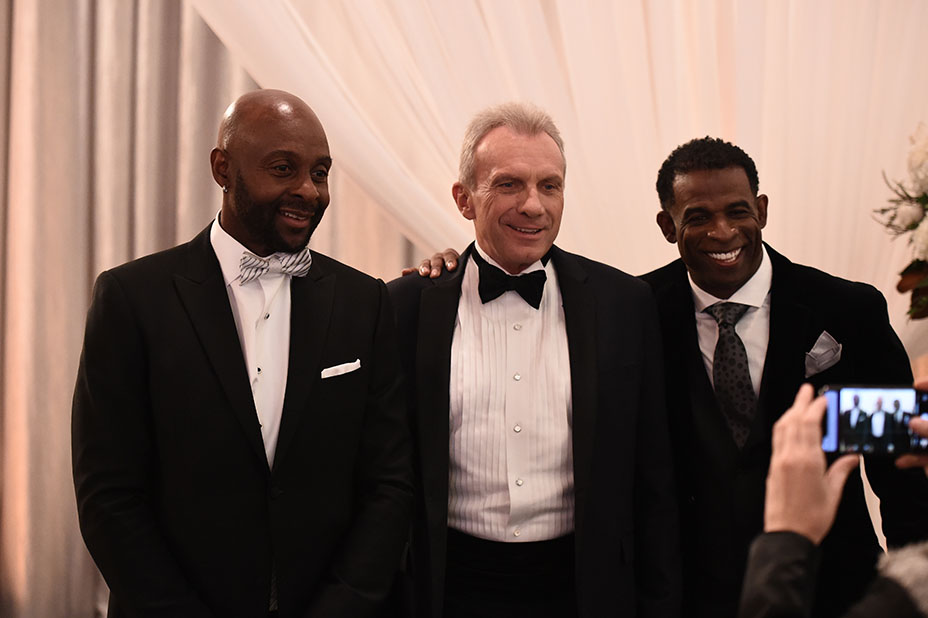 “We had a meeting to get a sense of if this was something guys can do,” Tracy Perlman, senior vp football communications for the NFL, tells THR. Perlman and her team were instrumental in making the idea a reality, but first she had to pull out her Rolodex to see if she could actually get players to sign on. Her first call? Legendary Dallas Cowboys wide receiver Michael Irvin.

“I called and said I wanted to pitch him something to get his feedback. He literally said to me, ‘I’m in, and that spot proves that once it’s in your blood it’s forever in your blood,'” she recalls. She then dialed Deion Sanders (“He calls me T-Peezy”), who was equally excited to be a part of the shoot. “It just started to roll and we were making phone calls constantly,” says Perlman. 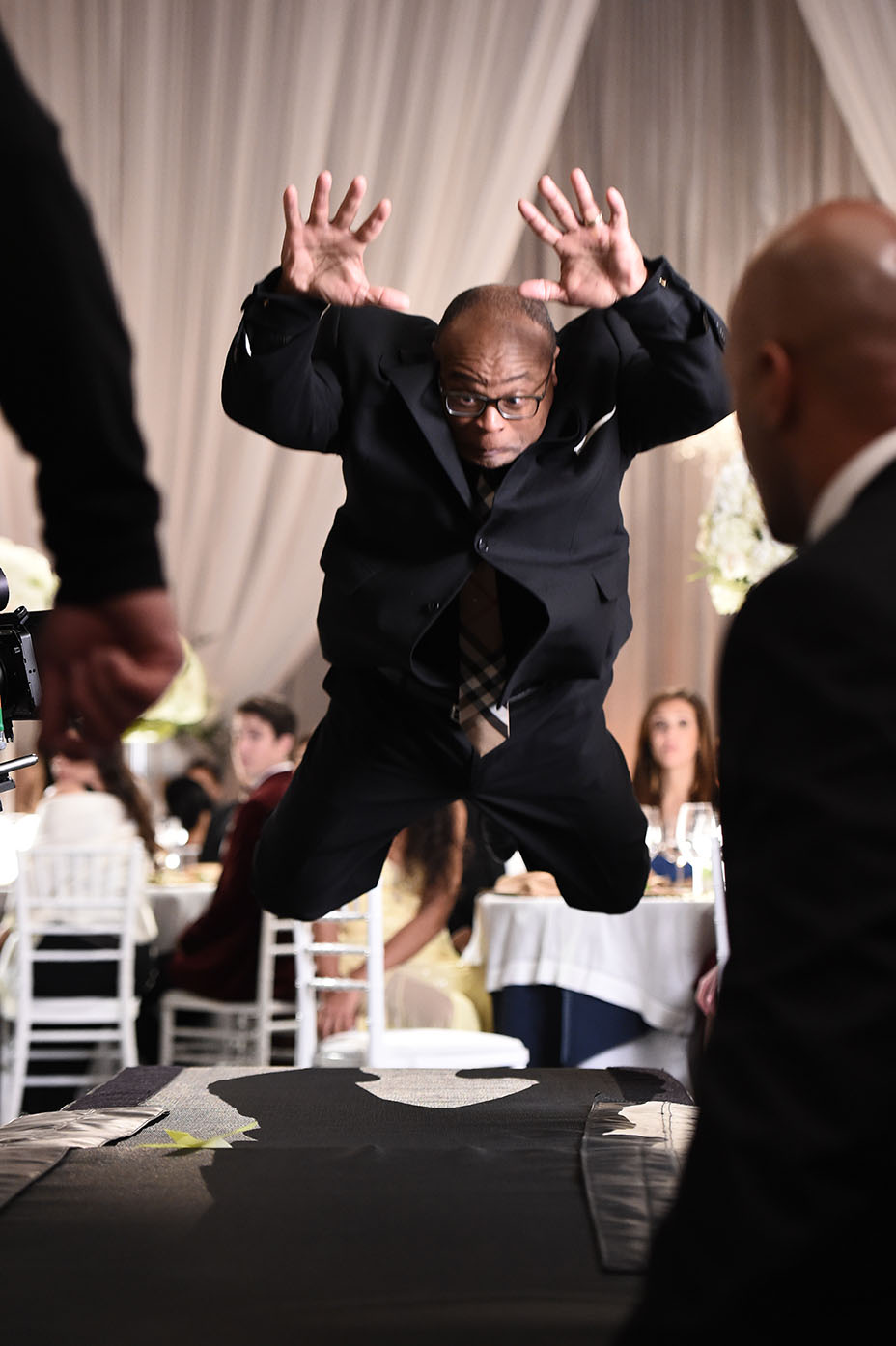 “It’s crazy. Odell comes in, Saquon goes out. Jim Brown comes in, Joe Montana goes out. They just keep coming and we just try to keep up,” Berg says.

The premise of the ad is simple: a gala reception honoring the league breaks into a pickup football game that, naturally, wreaks havoc on the swanky ballroom. As such, players are allowed to show off their skills, both athletically and as fledgling thespians.

“When you walk into a room and see Franco Harris, Jim Brown, Ed Reed, LaDainian Tomlinson, Brian Urlacher — you’re just kind of blown away by the magnitude of what this game represents,” Fitzgerald tells THR. “You feel like a child again.” Don’t expect to see Fitzgerald on any Hollywood red carpets in the future, however. “I’m not a Hollywood guy, not even in the least bit,” he adds. 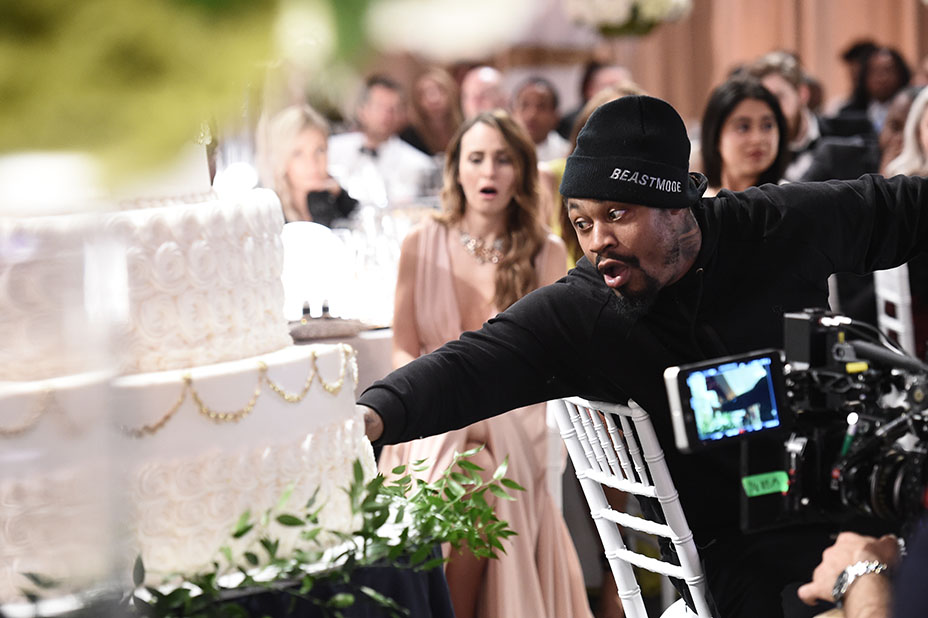 The idea of bringing together league legends and current stars was an intentional aim to showcase the game’s appeal to multiple generations.

“Football is America’s last big tent,”  It’s what brings Americans together,” Tim Ellis, chief marketing officer for the NFL, tells THR. “It’s critical for us to welcome our fans who have been with the NFL for decades as well as our younger generation who we have to work a little harder to connect with.” 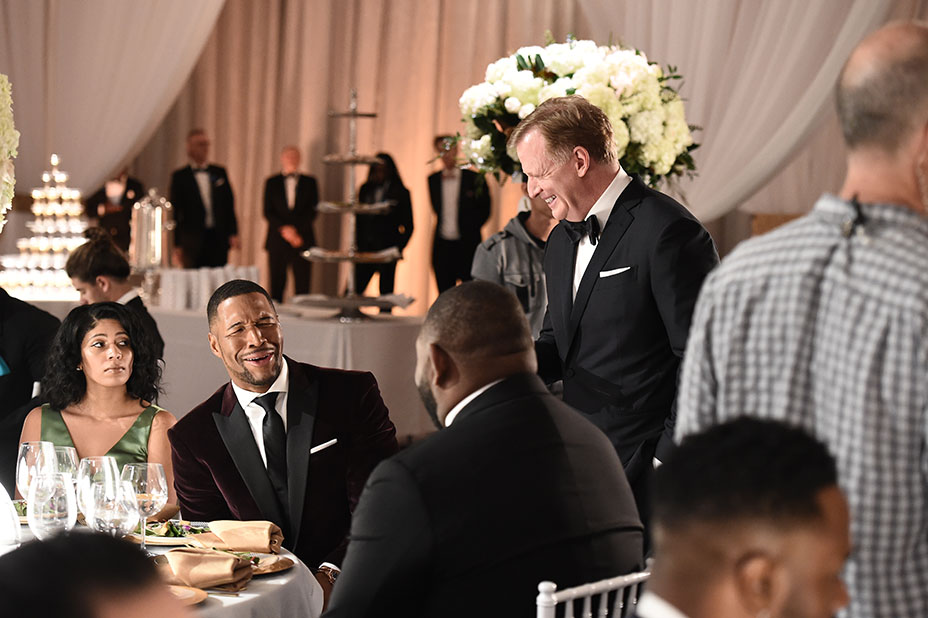 One face that Ellis hopes will be familiar to younger audiences is Tyler “Ninja” Blevins — the video game streamer who broke out in a big way in 2018 by attracting millions of viewers to his Twitch channel where he plays Fortnite — who has a cameo in the new ad. “That, of course, will not be recognized by our older fans but our younger fans will go nuts when they see he’s a part of the spot,” Ellis says.

For almost everyone involved in the shoot, however, seeing such a large number of NFL legends under the same roof is a once-in-a-lifetime experience.

“It’s pretty emotional,” says Berg. “You see the young, the not-so-young, the middle-aged and the older guys and it makes you actually think about growing up and about life.”