The seeds for the virtual Veep reunion that livestreamed on Sunday night had been in the works for weeks. Which is why it was very Veep-like that, only days before the cast-wide event, President Trump revealed that he had tested positive for COVID-19.

“It really upstaged us in a very almost Tom Hanks kind of way,” showrunner and executive producer David Mandel tells The Hollywood Reporter.

That reference rings true for fans of the long-running and beloved HBO comedy, which signed off in 2019 with a supersized, time-jumping series finale that circled back around to a joke from the pilot episode about Tom Hanks. The final joke of the series saw the fictional death of the actor upstaging major news about Selina Meyer, the starring vice president-turned-president played by Julia Louis-Dreyfus for seven seasons. (Spoiler explanation here.)

But on Sunday night, as news headlines circulated about Trump’s controversial SUV ride to salute cheering supporters outside Walter Reed National Military Medical Center, where the president is being treated, the Veep reunion and political fundraiser largely avoided any Trump talk.

Trump was only invoked when summing up the legacy of Selina Meyer: The “second worst president of the United States,” said Mandel; Louis-Dreyfus added of her character, “Selina began as somebody who was very self-centered and that focus on herself was completely reinforced by everyone around her. Nobody shut her down ever. Who does that sound like? So that massive ego grew and grew and grew until she absolutely did herself in with her own self at the end of the series.”

Now, speaking to THR, Mandel explains, “When Trump got sick, we made a very conscious decision to say, let’s just leave him out of it. Let’s try to take the high road while the man is in the hospital — or driving around, as the case may be. The only thing I can say is that, for three and a half years, it did seem like Donald Trump did whatever he wanted without consequences, which is part of what ruined Veep a little bit because it was a show where Selina often suffered from her own actions. I will say, this week it’s nice to see that there are consequences again. So, welcome back consequences.”

Mandel, who took over as showrunner and executive producer for the final three seasons of Veep, was approached about one month ago by the Democratic Party of Wisconsin to hold Sunday’s reunion event to benefit the Joe Biden-Kamala Harris campaign. “Anything you donate will be used to ensure that Trump loses Wisconsin, and thereby the White House,” read the public invite for the event.

Mandel’s first phone call was to star and fellow executive producer Louis-Dreyfus, and one email from the pair had almost the entire cast on board: Anna Chlumsky, Reid Scott, Sam Richardson, Tony Hale, Tim Simons, Clea DuVall and Matt Walsh — along with surprise guests Dan Bakkedahl and Nelson Franklin — all participated. And with plans for the event to include a few scripted bits, Mandel quickly found himself leaning on some of the show’s writers. “On Friday I was on the phone with the old writers assistants saying, ‘Look, can I just pay you for a couple hours of work?’ The organization of it got crazy. There were so many little pieces,” the showrunner explains.

Reuniting on behalf of Wisconsin, a key battleground state in the 2020 presidential election between Trump and Democratic nominee Biden, Louis-Dreyfus and the cast ended up raising more than $500,000 for the Democratic Party of Wisconsin by the end of the broadcast, and urged fans tuning in to volunteer for the cause. The event livestreamed once and required a donation for access (more on that below).

Moderated by Mandel, Sunday’s event included the cast answering fan questions about the series — which wrapped its seventh and final season in May of 2019 — and performing a virtual table read of five deleted scenes, including from the final episode. When a fan asked about the biggest lingering question from the series — “What really happened on Labor Day?” — the showrunner shut it down: “We are not going to tell you. We’re saving it just in case, for down the line. You never know when we’re going to be back and filming!”

Speaking to THR, Mandel can’t imagine doing the show amid current times. “Our best day doesn’t compare to the stuff this White House does on a regular hourly basis of incompetence and stupidity,” he says. “Two years later, Veep is more relevant than ever in a funny but very frightening sort of way.”

But he does acknowledge that reuniting, digging through old scripts and working together again for Sunday’s event has made everyone nostalgic. “Everyone is missing everybody and everyone really misses the show. I think we all miss it maybe in a way that we don’t miss other things that we did and left,” he says. When asked about any sort of televised reunion, he makes this plea: “Look, the show doesn’t exist with this guy in the White House. So, if people really want more Veep, it’s something to think about!”

The reunion opened with a pre-taped bit of Walsh reassuming the podium as his press secretary character Mike McLintock to explain the ground rules (“Everyone watching must follow COVID-19 regulations for their particular state”) and warn of foul language ahead (“It’s kind of what made the show famous”).

Walsh’s McLintock then said, “Let’s start shall we? Thoughts and prayers.”

As promised, highlights from the gathering included a cast-wide competition to deliver the best Jonah Ryan insult for the character played by Timothy Simons (“Stillborn flamingo,” a submission from special guest, and real-life Wisconsin congresswoman, Gwen Moore, was the winning jab); and an expletive-filled plea of electoral wisdom for Wisconsin voters from the duo of Congressman Roger Furlong (Bakkedahl) and his aide Will (Franklin). 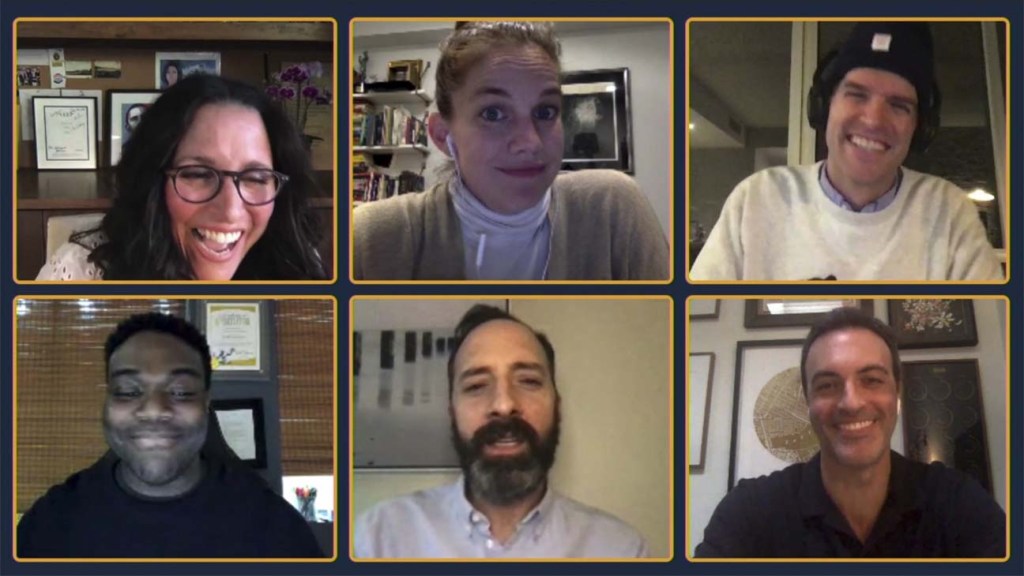 When announcing the reunion, Louis-Dreyfus had explained of the collective goal: “All roads to the White House go through the great state of Wisconsin. Trump can’t win reelection if he doesn’t win Wisconsin. So, the Democratic Party of Wisconsin has built an unprecedented voter mobilization operation and they need resources in these final days to deliver Wisconsin to Vice President Joe Biden and Senator Harris. The future of democracy is on the line, people, and that’s why the cast of Veep is getting together for a virtual reunion with some special guests, too. You don’t want to miss this.”

At the end of the night, the Veep star reiterated, “Wisconsin is going to be close, and it’s the best way to get Joe Biden in the White House.” In 2016, Trump ended up winning the state by fewer than 23,000 votes.

As for his favorite moment, Mandel is just happy the event ran successfully and smoothly, after a very Veep-like and disastrous tech rehearsal the day before. “The highlight of the night was hearing the totals at the end and the fact that it will keep going up. That was just awesome,” he says of the money raised. “It’s nice to be able to contribute. I’m doing everything I can here at the Mandel house. But there’s something really nice about being a part of something that could make a difference — and that half a million dollars in Wisconsin and people signing up to volunteer could do it.”

Visit wisdems.org/veep and, with a donation, gain access to an exclusive replay of the reunion. On the replay page, fans can enter a raffle to win autographed prizes, including posters, bobbleheads and a script from the final season autographed by the cast.