[This story contains spoilers from Tuesday’s “Our Little Island Girl” episode of NBC’s This Is Us.]

Tuesday’s episode of This Is Us — the long-awaited Beth (Susan Kelechi Watson) hour that detailed the backstory of Randall’s urban planner turned dance-teacher wife — was a long time coming. The idea originally came to series creator Dan Fogelman after the second episode of the family drama’s first season — when Watson delivered a monologue that left him reeling.

It took three seasons to get to Tuesday’s “Our Little Island Girl,” but Watson told The Hollywood Reporter that she prefers it that way. “There’s this slow-peeling onion that Beth’s life is, and it’s really interesting for me not to get it all upfront, to sort of grow with the character as the show is growing and discover new things about her,” she said. “I don’t know everything about her, and most of us don’t. I mean, things change sometimes from storyline to storyline, or episode to episode. But what excited me the most about it was that it was really three years before I got a chance to get intimate with her childhood, and what that was about, and what her hopes and dreams were about.”

'This Is Us': Inside the Family Drama's Darkest Episode Yet

The episode featured adult Beth and her cousin Zoe (Melanie Liburd) travel to Washington, D.C., to take care of her mother (played by Phylicia Rashad) who had injured her hip — and opened up into Beth’s backstory. Raised by her formidable mother, Carol, and loving Jamaican father (played by Carl Lumbly) — Watson’s family is Jamaican — a young Beth (who went by “Bethany”) trained as a ballerina for a decade (under a teacher played by Goran Visnjic). But after her father’s cancer diagnosis and death, her mother guided the studious teenager into what she felt was a more practical career.

“It’s a complicated dynamic sometimes, mothers and daughters,” said Watson. “There’s this thing of, like, ‘This is a model of womanhood for you,’ but yet we find so many reasons why we don’t want to be like our mother. Then mothers can sometimes feel like they want you to do so well that they just forget to support you, and be there for you, and what makes you happy, and all these kinds of things. So that’s the dynamic that’s happening between Beth and her mom — trying to get this balance of a mother that just wants you to succeed and be OK versus what Beth wishes would happen, which is somebody who would just say, ‘Look, I’m here for you whether win, lose or draw. Whether you fall hard or you succeed, as long as you’re happy, I’m here.’ It’s exciting to explore that dynamic with our moms, and what it’s like to kind of reconcile something that’s gone on for so long, and to finally come to a place [where there’s] forgiveness about it.” 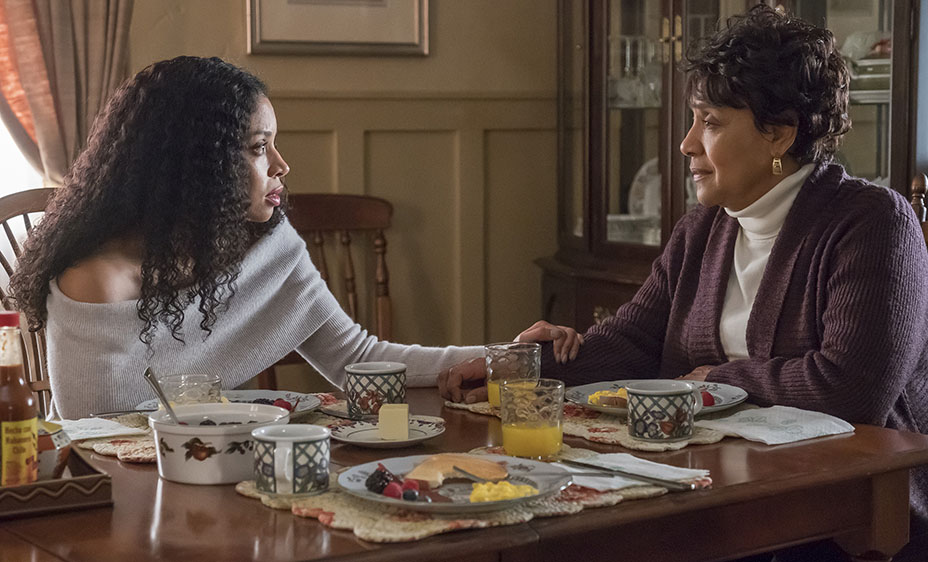 In that forgiveness — or at least a deeper understanding of her mother’s own motivations to push her daughter — came a realization for Beth about what she actually wants to be doing with her life. She wants to revisit her love of dance and become a dance teacher. The idea of revisiting a childhood passion is something the show has already explored a bit in Kate’s (Chrissy Metz) newfound singing career, but it’s also something many women know about.

“Historically, and even now, women have been asked to give up on their dreams way more than men, mostly — because it’s sort of like you’re supposed to once you become a wife and mother. That’s a generalization; that’s what the mentality has been,” Watson said. “Kate and now Beth’s storylines help portray women who were able to say, ‘You know what? I am those things and I love those things. But I’m also a person who has dreams and wants to be fulfilled in this way that is really about me as an individual and not about not something that’s reflective of me and my husband, or a reflection of me and my kids. This part of me needs to live as well for me to feel a whole, complete person.”

Like Watson’s own Jamaican background, Beth’s history with dance echoes her own life. But it’s still something that surprised the actress when producers told her what her character’s arc would be for the season.

“That was something that I learned was going to happen in September of our shooting year, was her love of dance, which I was very excited about because I love dance,” she said. “It’s my favorite form of expression, so that was really exciting. The second most exciting thing after that was the moment I found out — and it was only because it happened afterward — that Phylicia Rashad was going to play my mom on the show, which was really perfect.”

'This Is Us' Wins SAG Award for Best Ensemble

Rashad’s role on The Cosby Show means that she’s already the quintessential mother figure for anyone who grew up in the ’80s and ’90s, which came in handy when the actress got to the This Is Us set. On her first day of filming the episode, Watson recalls a life-imitating-art moment that stuck in her mind.

“When we first encounter Mama C at the door when Zoe and Beth walk up to her house, and at the door they try to say, ‘Look, shouldn’t you use your walker?’ And, ‘Take it easy. The doctor says,’ Then Phylicia just says, ‘Now stop.’ She said to stop, so we just were going to stop,” Watson said. “That’s the power that she was coming with. And that was our first day of shooting, so that just set the tone.”

Rashad’s sometimes intimidating presence allowed Watson to get into character, she said.

“There were moments where I let the intimidation do what it does and I just shut up, because that’s sort of the character. She gets overwhelmed by her mom, the force of her mother, and sort of retreats in a lot of ways,” she said. “But what she also learned from her mother is how to be strong and how to speak her mind. So, I love the part where it finally comes to a head and she’s like, ‘You know what? Look, woman-to-woman, let’s talk about this.’ She stops allowing that fear to take over and she finally says, ‘No, I have to speak my mind. And in essence, that’s what you taught me.'”

This Is Us‘ mysterious flash-forward scenes have also begun making a lot more sense now that we know more about Beth’s past (and her and Randall’s future) — and the fact that it appears Beth’s new career trajectory as a dance teacher (in her “Debbie Allen fullness”) will work out has also helped Watson’s performance.

As for more flash-forward scenes, “It’s going to be good. I’ll say that. And I say it unabashedly, so I’m really excited about it. So I hope that everybody feels the same way about it as we do, because I think from this point on, for the rest of the season, it’s going to be a train that you just get on. It’s going to keep going.”

The rest of the season will feature a more in-depth look at Beth and Randall’s relationship — an upcoming episode will follow their history as a couple, “You’ll get to see Beth and Randall go through various challenges in their marriage, but you get to see their backstory, and I’m really excited for that to play out,” Watson said — and season four will show more of Beth’s relationship with her own daughters. But Watson is excited that she’s gotten to portray a healthy marriage on television — current rough patch and all.

“It’s important to see, because people choose marriage and they choose it for a reason. They want to spend the rest of their life with this particular person,” she said. “And so whether it gets hard, or mundane, whatever it is, you still have to continue to make the commitment and make the choice to remain, and what I love about Beth and Randall is that it’s never about some kind of outside factor.

“There’s nothing that’s threatening their marriage in terms of its another person or I’m bored and so I just want to do things behind your back and lie about another aspect of my life to try to get some excitement or whatever it is. It’s going to be these two who really love and trust each other and they’re going to keep doing whatever it takes to make it work because they choose one another. And so you get to see how active love is, and it’s not just, ‘Oh, I love you’ and that’s it. Once you say it, there’s a lot of action that has to happen to maintain it.”