[Warning: This story contains spoilers from This Is Us‘ Jan. 15 episode, “The Last Seven Weeks.”]

The end of This Is Us‘ fall finale, which aired in November, saw Randall Pearson (Sterling K. Brown) and his wife, Beth (Susan Kelechi Watson), facing the biggest trial of their marriage to date: the toll Randall’s campaign for Philadelphia City Council was taking on their relationship and their kids.

The show’s midseason return followed the seven weeks between that fight and Election Night, with Randall often not even making the grueling two-hour drive home from Philly to North Jersey toward the end of his campaign. In a heart-to-heart with the Philadelphia pastor whose endorsement Randall had previously sought, however, Randall realized that his family — and not using the negative opposition research he’d gotten on his political opponent, incumbent Sol Brown — was more important than anything else.

'This Is Us': Inside the NBC Drama's Biggest Cliffhanger Yet

So it was with that integrity (and the realization that he needed to spend more time with his four girls) that Randall embarked on the final days of his campaign — and won.

What’s next for the character? Brown spoke with The Hollywood Reporter about the election results, Randall and Beth’s future, and learning that Jack’s brother Nicky is still alive.

Did you know at the beginning of the season that Randall was going to win the race?

We know the whole arc of the season from the beginning, so yeah, I knew what was going to happen. Dan [Fogelman, creator] got really excited, ’cause he’s like, “We don’t want to tell people what happens till the very end of the episode.” And I was like, “OK, OK. We’ll keep it close to the vest.” It was interesting, too, because the reveal is not a purely euphoric moment. There’s jubilation and trepidation in equal parts. Because it’s awesome. We put in all of the blood, sweat and tears to get to this moment, to get the victory — but the “now what” hasn’t really been thought through on Randall’s part.

You’re talking about four hours in a car, back and forth from Philadelphia every day. How much time does he now really get to spend with his family? What kind of stress does that now place on that? How do they create what is their new normal?

What kinds of ramifications will this win have on Randall and Beth’s marriage?

There’s going to be some trials and tribulations. There is rocky terrain ahead, but there’s rocky terrain in any marriage that’s worth its salt, and you figure out how to make it through. I’m hopeful. I have remained ever hopeful that Beth and Randall figure out a way to make it through, but we have seen a glimpse into their future, which may lead folks to believe that they didn’t quite make it all the way. But we’ll see, won’t we?

The turning point of the episode seemed to be Randall’s conversation with the pastor on New Year’s Eve. What did that chat make him realize about himself?

So, he’s given this incredible opportunity, right? He recognizes that Sol Brown has not been above board in all of his dealings during his tenure as councilman — drunk driving, covering it up, not having it reported. He could easily just take this election by taking the low road. The low road is a very sensational and popular road to take in politics oftentimes — because it works, right? We don’t like to say that, but it does.

But when he comes face to face with that opportunity, he ultimately decides that’s not what he wants to do. He got into this race to do good, not to tear someone down, but to lift people up. So the way he gets into [the negative aspects of the campaign] is antithetical to the reasons why he got into it. He ultimately realizes that he can’t do it. 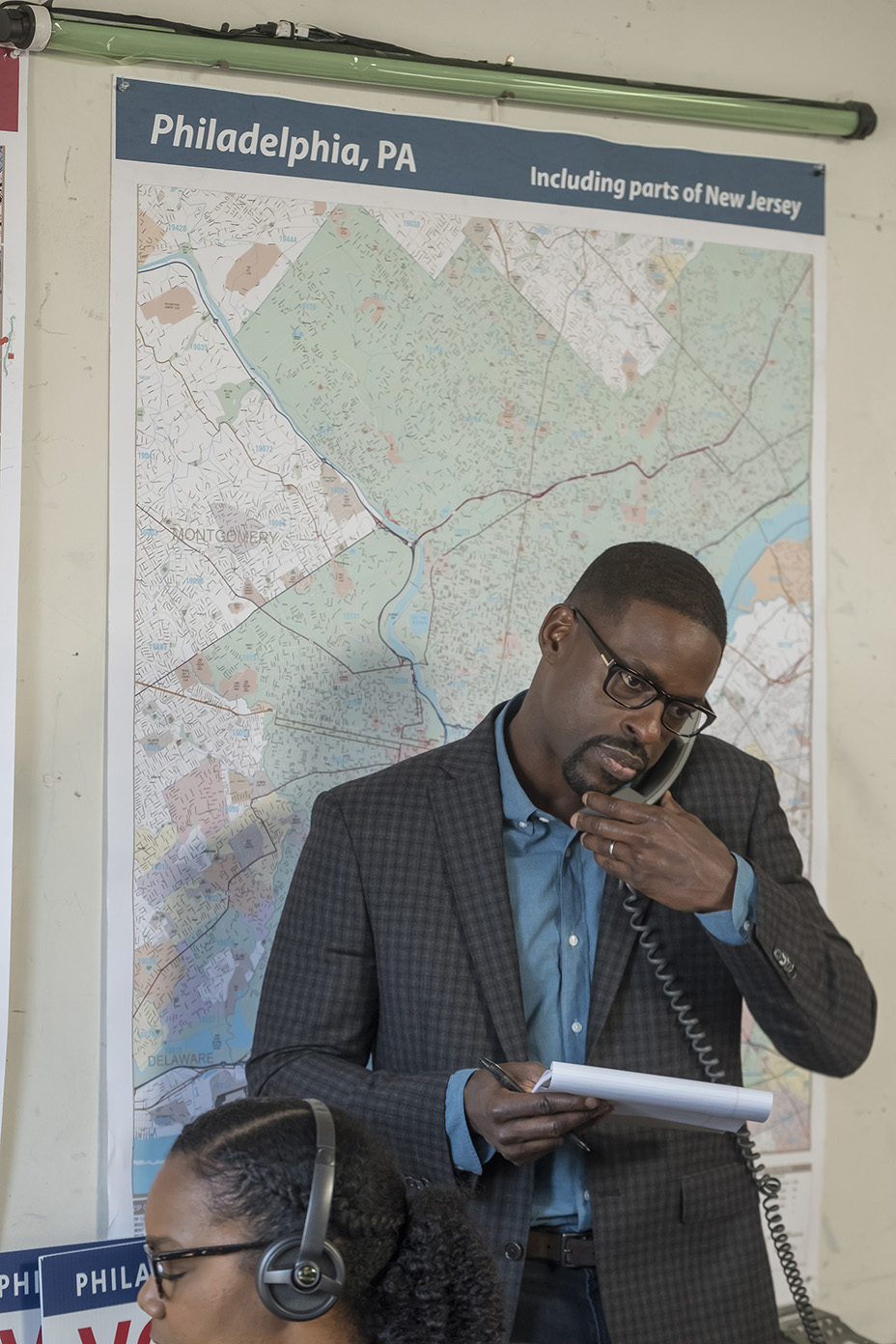 When the reverend says, you know, “When you’re old and you got this blanket over you, you want to look back and think I lived the best life possible.” That meant that that’s not a tactic he could do. Then the reverend cements it by giving him this blueberry pie, and the blueberry pie is like the biggest olive branch that Randall could have brought home to his wife because he’s been absent.

He’s a one-track mind kind of guy. Once he commits to something, he doesn’t know how to half-step it. Then everything else falls by the wayside and Randall realizes, “You know what? I also need to have balance.” It’s this desire to be of service. “If it destroys my home, then am I really being of service if I can’t serve the people who I live with, the people that I say that I love?” So I feel like the whole journey of Randall is finding the middle ground, finding a way to be at ease with himself. He’s so just Type A. Every once in a while he has to take a step back and exhale. Then ultimately when he’s ready to give up on this pursuit of office, his wife says, “Hey, man, you’re great. You’re great because you care too much and you try too hard and that’s the man that I married. That’s the man that I support.” Then he gets the W. It’s crazy.

The win will obviously have an effect on the marriage. How will that play out over the rest of the season?

Even in the argument in the episode he says, “Yeah, sometimes I think you’re just mad because I’ve got something that I want to give my time to right now and you don’t.” She’s like, “You know what, brother, I need to step out of here before I say something that I regret.” There’s truth to what Randall says even though it wasn’t the nicest thing to say, but you know, Sterling was like, “God, Randall, did you have to be so whatever?”

There’s truth to it, and so there is a really intriguing exploration of a marriage. I feel like the show does a great job with Toby and Kate, with Jack and Rebecca, and also with Randall and Beth in terms of the work that is required to be successful. You’re going to see real work in the back half of the season to maintain the sanctity of this marriage.

'This Is Us' Adds Goran Visnjic in Recurring Role

What can you say about the Beth-focused episode that’s coming up?

We shot it before Christmas break, and I’m going to be perfectly honest: I’m in one scene. I’m happy, but this is Sue’s episode. I’m going to put this out there because I want to bring it to fruition: I think that Susan Kelechi Watson has been killing it for the past three years, and I feel like she hasn’t quite gotten the shine that she merits. Now that she has her episode with a strong assist from Dame Phylicia Rashad, I’m hoping that the awards community takes notice and says, “You know what, maybe this woman needs to have a nomination or two.” She’s ridiculous.

She and Mandy Moore haven’t gotten as much recognition for their work.

Honestly, I don’t know what else you want from Miss Amanda Moore, who is 34 years old and plays a 42-year-old man’s mother, who’s actually 38 on the show, and you don’t blink an eye! I don’t blink an eye. When I call her Mom, she’s my mom. I don’t see somebody eight years younger than me. I see my mother, and I love her, and I respect her as a thespian, as a human being. I feel like unfairly sometimes, the stigma of being a former child pop star maybe looms over her, but Mandy Moore is acting her ass off. I’m a fan.

Touching on the Kate storyline, how does Randall feel about becoming an uncle for the first time?

I don’t think he could be more excited. He and his sister got into a little bit of a scuffle earlier in the season after she lost the baby, and I think he recognizes just how important it is to her. He knows how important it was to him to become a father, in terms of the evolution of his own humanity, and I know that he wants his sister to feel that same sort of fulfillment. But not just his sister. You know what, he’s got some real, genuine fondness for Tobias as well, and so, two people that work that hard to really have a child, to experience parenthood, you wish them nothing but success. We’re wishing her all the best, and knowing that it’s a scary endeavor. She is a plus-size woman, she is 38 years old. This is not the cleanest way to enter into pregnancy, but taking all of those risks [into account] and understanding that there is not a clean path toward parenthood for her the natural way, he still supports her because he knows that’s what’s going to make her happy.

As for Randall and Kevin, their relationship hit on a low note this season after Kevin’s arrest, but they seem to have repaired it. What’s going to happen when Kevin tells them about their Uncle Nicky being alive?

It’s going to come out. As a matter of fact, the subsequent episode, you will hear the revelation of that secret. Kev and Randall have an incredible bromance [where] everything seems copacetic for a very long time, and then they hit a big bump, and then they fall out. And then they work their way back together and they’re copacetic, everything’s cool, and then they hit another big bump. And every time they hit a bump, it’s not just like, “Ah, well, man, no hard feelings.” It’s like, “Ah, dude, you really piss the fuck out of me right now, and now I’ve gotta see if I want to deal with you for the foreseeable future.”

There are a couple of moments like that that transpire, and I won’t say how it ultimately ends.