[This story contains spoilers from the season four finale episode, “Strangers: Part Two,” of NBC’s This Is Us.]

This Is Us wrapped up its fourth season with an hour that encompassed four different time periods, introduced two new key characters, brought back many more recurring players and still managed to set up storylines that will reverberate throughout the final two seasons for which the show has already been renewed.

First, the episode (and all its different storylines):

In the past, Jack (Milo Ventimiglia) and Rebecca (Mandy Moore) spent the Big 3’s first birthday finally dealing with the loss of the third triplet, Kyle, thanks to a visit to Dr. K (Gerald McRaney).

'This Is Us' Creator Dan Fogelman on Spinoffs, Special Episodes and the Streaming Wars

In the present, the Pearsons all gathered in Los Angeles to celebrate baby Jack’s first birthday. Rebecca had agreed to Randall’s (Sterling K. Brown) impassioned request to prioritize his feelings and participate in an Alzheimer’s study in St. Louis that would take her away from the family for nine months — and when she told the rest of the family, they were visibly upset. Randall and Kevin (Justin Hartley) had the blowout fight that’s been teased for months, saying some truly hurtful things to one another — Kevin that he regretted that his parents had adopted Randall, Randall that Jack died thinking Kevin was a failure. While this fight was happening, Madison (Caitlin Thompson) revealed to Kevin that she was pregnant from their one-night stand. And after the fight ended, Kevin told Madison that even though they didn’t know each other well, he was happy for the love of his life to be his child — but she revealed one more bit of information: she’s pregnant with twins.

Kate (Chrissy Metz) and Toby (Chris Sullivan) went to the NICU where premature Jack lived after he was born to post a celebratory one-year photo, and they decided they wanted another child — but since it wouldn’t be smart for Kate to get pregnant again (too many complications), they would adopt.

Elsewhere, Kevin chatted with his Uncle Nicky (Griffin Dunne) on the phone as his one-time fling Cassidy (Jennifer Morrison) went to pick up Nicky for their AA meeting, and Kevin’s ex-wife Sophie (Alexandra Breckenridge) got a laugh seeing him shirtless on a subway perfume ad. And in a completely separate story, a man (Josh Hamilton) and his daughter Sadie (Glory Rose) worked on taming a new horse — that man turned out to be Eli, Madison’s OB-GYN. 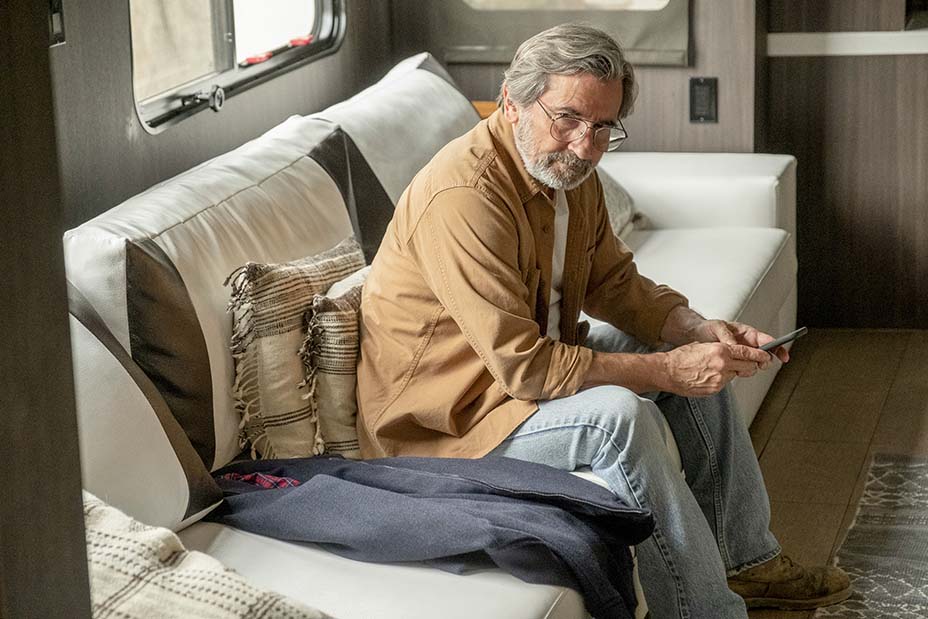 In the near future, where previous flash-forwards showed the Pearsons gathering on Rebecca’s death bed, Kevin rubbed Randall’s back as Kevin’s seemingly 8-year-old son headed into the room. A glimpse of a wedding ring on his finger revealed that the pregnant fiancee he’d teased in the Big 3’s 40th birthday flash-forward likely stuck, and a flash of a wedding ring on Nicky’s finger revealed he’d tied the knot to someone as well.

In the far future, the wife of Kate and Toby’s son Jack Damon (Blake Stadnik) gave birth to their first child, and a mysterious woman played by Adelaide Kane (Reign) rushed to her bedside — she’s Jack’s little sister, Hailey.

Creator Dan Fogelman spoke with a small group of reporters, including from The Hollywood Reporter, about the episode, and answered a few burning questions about the biggest reveals and what’s to come on the series. He also confirmed what THR reported last May: that season six will also be the end of the series. “We’re obviously picked up through season six. [It was] a gift to be picked up for two consecutive three-season pickups, which we asked for, which was really kind of to plan out and map out our storytelling in a big-picture way. Yeah, that’s when the Pearson story will basically come to a close.”

Is Madison the fiancee Kevin referenced in a prior flash-forward?

“There’s an immediate answer coming to all of that, but I think that there’s basically many more chapters in Kevin’s romantic story,” Fogelman said. “We are far advanced already. I’ve already written the season premiere of next year and broken, I think, five episodes of the season, and we have mapped out plans for the entire next and sixth season honestly, so Kevin has a journey ahead of him, and I don’t want to get too far ahead of it just yet.” 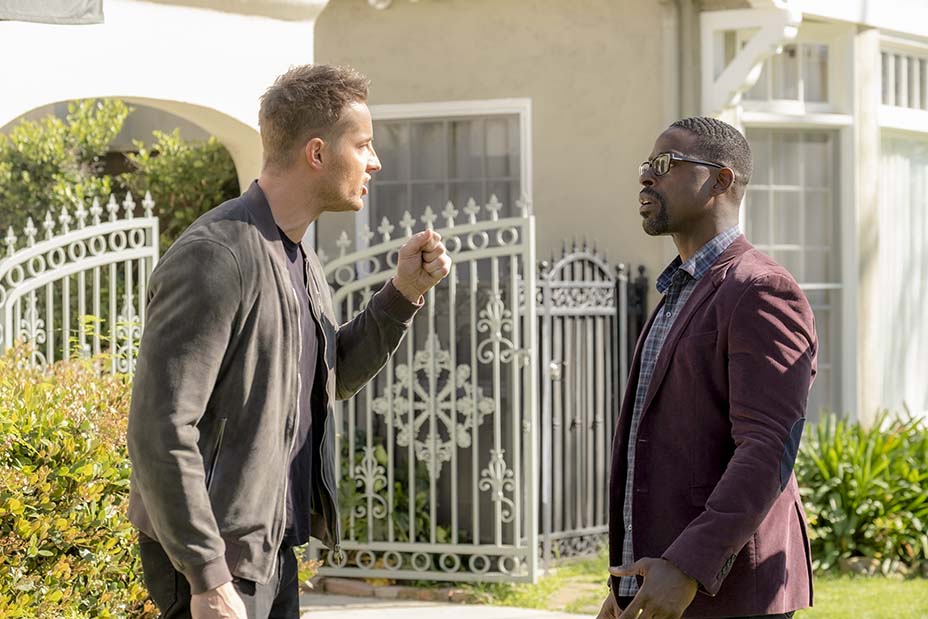 What was the process of writing Randall and Kevin’s big fight like?

“Family rifts are really hard both to be a part of and to watch,” Fogelman said, and he and his writers knew that the stakes had to be high for both men — it needed to be believably brutal to come between such a close-knit family. “I think it’s been carefully baked into both the show at large and the season, in the last half of the season specifically. This is Cain and Abel type stuff for these two. This is a fight that goes toward literally their inception, two alpha men growing up under the same roof at the exact same period of time, both with two wildly different skill sets. It’s easy to forget now, 72 episodes into the show, but these brothers have only really gotten along and had a real adult relationship for the two and a half, three seasons of the show. When we first met them until halfway through season one, these brothers felt very estranged, weren’t that close, and developed this relationship in the course of the first couple of seasons. So it would take a lot to bring them back to their their primal, primal wounds of childhood and pull them apart. These aren’t brothers who have been speaking on the phone every day for the last three years. All that fed into what we tried to execute. I just thought the guys did it so brutal and so brilliantly. It’s all done in one take. I think part of part of making a drama is not being afraid to let people be really flawed and really ugly so that hopefully, as we tend to do on our show, the hope we offer and the repair we might offer is well-earned and well-executed when it comes.”

How 'This Is Us' Is Exploring Anxiety With Sterling K. Brown

How does Rebecca actually feel about moving to St. Louis for nine months?

“It’s obviously a challenging chapter for Rebecca moving forward. We have a big storyline planned for Mandy in the next upcoming season in present day as an older woman and also her past timelines,” he said. That will include a deeper look into Rebecca and Miguel’s (Jon Huertas) relationship throughout the decades. 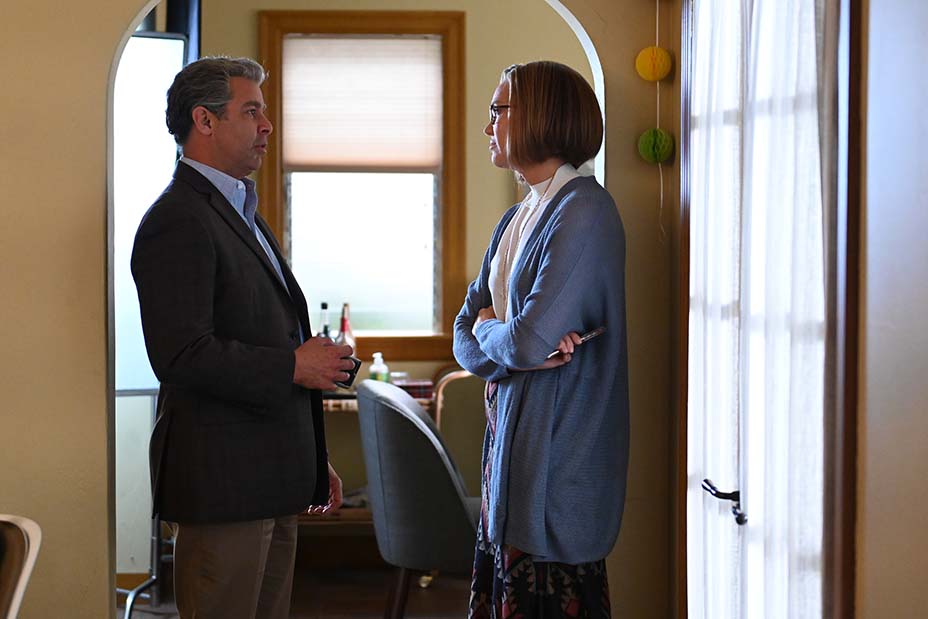 How much time will be spent on flash-forwards vs. flashbacks in the next two seasons?

There’s a reason that This Is Us has been gotten two multi-season renewals in a row, which will see the show end after season six. “We’ve parsed out the shape enough that we will never run out of the past flashbacks that inform the present. Milo will always be in the show, Young Rebecca and younger versions of the kids will always be in the show,” Fogelman said. “But the plan is to kind of tilt into different timelines that go past our present day a little bit more as we move forward. More of that is coming, and not just in that deep, deep future where Jack Jr. lives.” The creator also confirmed that the multi-season renewals helped the writers to fully shape the entire Pearson family story, and season six is “when the Pearson story will basically come to a close.”

'This Is Us': Five Things to Know About the Remainder of Season 4

How much will audiences see the adult versions of the Big 3’s kids, including Jack Jr. and Hailey, going forward?

“We really love the actress we found to play the daughter, Adelaide, and obviously we’ve really [fallen in love with] Blake, who plays Jack Jr. So our hope is to continue to make people invested in these future storylines by getting into the characters slowly, as we’ve done, so that by the time you’re really landing in full stories with them, if we do, you feel that great investment,” Fogelman said.

As for the other major new character, Madison’s doctor, Eli, “Josh is a favorite actor of mine. The doctor becomes an important character next season to Kevin — he’s having twins with a virtual stranger, not a normal birth experience. It’s no coincidence he was introduced in the same episode that Dr K. returned.” 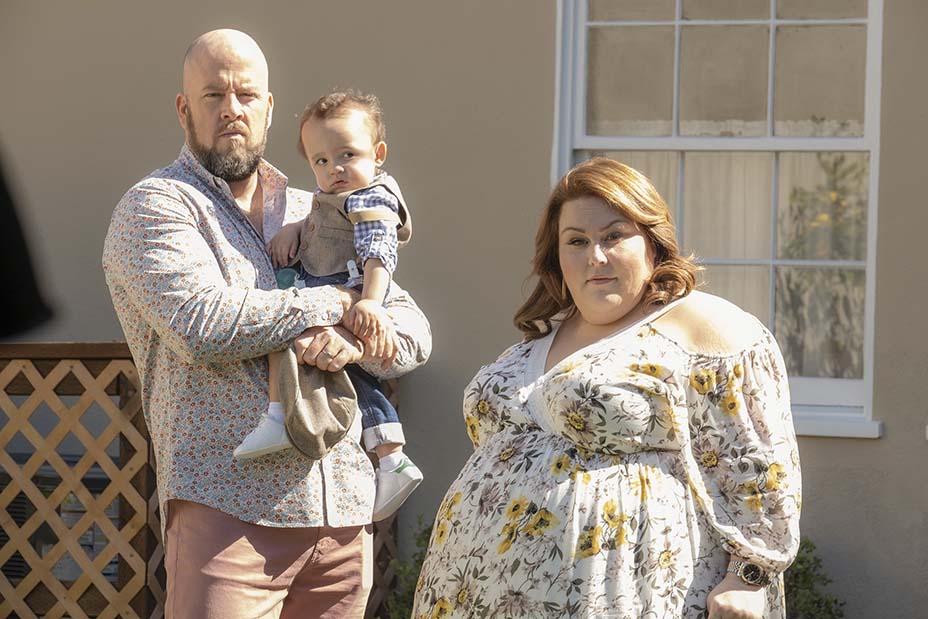 What are the biggest themes of season five?

“I’m very excited about — especially with where the world is right now — the uplift and I would call it almost a rebirth that comes next season,” Fogelman said. There are “a lot of new beginnings” coming, and, as always, “something big” in the already-written season five premiere.

TV Ratings: 'This Is Us' Finale, 'NCIS' Score Big