[This story contains spoilers from Tuesday’s season two finale of NBC’s This Is Us.]

This Is Us wrapped its second season Tuesday with Kate (Chrissy Metz) and Toby (Chris Sullivan) exchanging “I dos” at the Pearson family cabin with the whole family present — including patriarch Jack (Milo Ventimiglia), despite the fact that he died two decades ago.

In fact, Metz tells The Hollywood Reporter that it was the first time she was able to act with her TV father, in a pre-wedding jitters-induced dream sequence that featured Jack and wife Rebecca (Mandy Moore) renewing their vows to commemorate their 40th anniversary.

'This Is Us' Boss Explains Season 2 Finale Flash-Forwards, That New Character and What's Next

“It was layered with young Kate and current Kate and their relationship or what the relationship could have been,” Metz says, “down to what he would look like at this age and all of those things that everyone who has lost a loved one thinks about — the memories that could have been and things that could have been shared. It’s heartbreaking because as much as things happen for a reason, it’s really hard to contend with someone that you really love is gone, especially when you have a relationship like Kate and Jack did. It was really layered, and it was really wonderful and a lot of fun to have all of us together. I had to wait two years, but that’s what’s really special about it. It wasn’t just like, ‘Oh, let’s just unnecessarily put them together.’ It was this really defining moment.”

While some viewers worried that Kate wouldn’t make it all the way down the aisle, Metz says she didn’t. The episode needed to end on a happier note, especially after the emotional season that focused on the circumstances surrounding Jack’s death.

“People wanted to be so happy for Kate and Toby, and for the family, that it was really important to leave on a [happier] note. They had so much going on in the past two seasons that it was really like a really great hug. Like, ‘Oh, thank god.’ So many people had predictions that, ‘Kate is so emotional and she can’t handle things’ that she would leave Toby at the altar, so I’m glad to know that it was a feel-good finale.”

Below, Metz discusses the episode in depth, including Kate finally moving on from her guilt over Jack’s death, taking care of Toby during his depression (which was glimpsed in a short fast-forward at the end of the episode) and her expectations for season three. 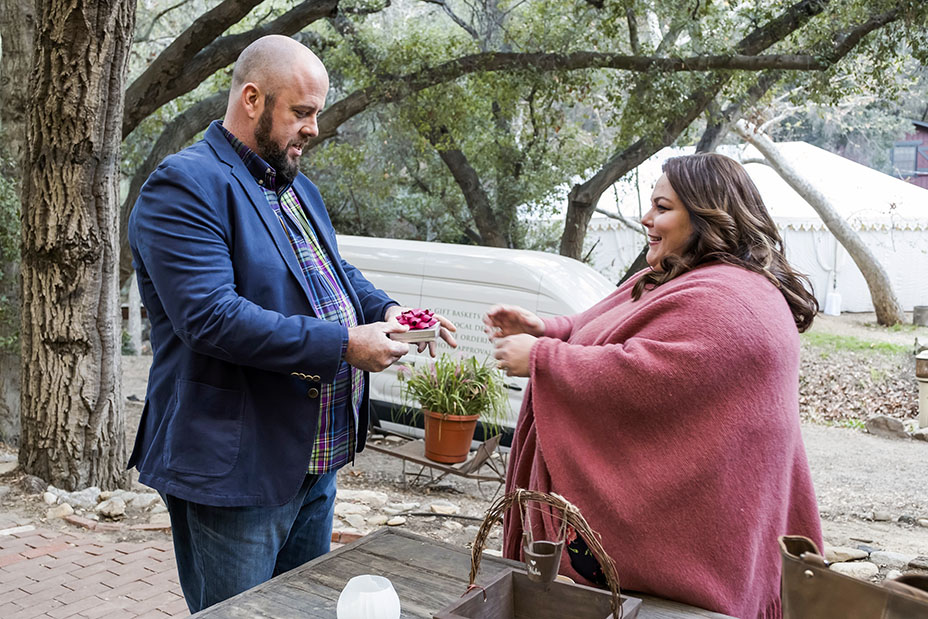 A lot of Kate’s issues from the past two seasons have been centered on her experience relating to her father’s death, but she had a cathartic moment in the woods thinking back on her talks there with Jack as a kid, and later with Kevin’s (Justin Hartley) speech that made it seem like she really is ready to move on.

Yes, that’s the culmination of the past two seasons with Toby and knowing that he is the right man for her and that Jack would be so thrilled and so happy to see them so happy. It’s definitely a release of the guilt and the shame and the pain that she’s held on to for so long and [finally feeling] that somebody could actually fill a bit of Jack’s shoes. She’s got to keep it moving and go through all of that to really start her life as the Kate she’s always wanted to be and always had the potential to be and never really believed it. Like all of us, myself included, sometimes we need people to believe in us so we believe in ourselves. That’s what Toby has done for her and made her feel loved and lovable again. There’s definitely a shift happening and a change with Kate and within the relationship. It’s exciting because we all want to see characters go through a journey and hopefully evolve in the right direction, and she’s working at it.

When Kevin and Randall (Sterling K. Brown) were driving together in the car, Kevin confessed that he worried he spent too much of his life letting Kate take care of him that he didn’t push her and take care of her. With Toby sinking into a depression in the flash-forward, do you worry now Kate is going to focus too much energy on Toby? Or do you think this is what she wants, this partnership?

What’s great about healthy relationships is there is a give and a take, and Toby has given a lot to Kate. While it will be difficult what comes up, she also knows that she wants to be there for her husband. This person has always been there for her. Part of her challenge is balancing being there for Toby but also for herself, and that’s something that we all have to deal with. We all have to draw boundaries and that’s a constant struggle of all mothers, in particular, put their kids first and then they forget about themselves. It’s something that we’re all working on.

Going back to the wedding, what kind of involvement did you have in creating Kate’s bridal look?

It was all a collaborative thing between hair and makeup and costumes. We decided we wanted something that was sort of vintage in its own way, but very classic, but still contemporary. Because we were shooting it at the family cabin, I was like, ‘Oh dear, we can’t have such a long train because it’s dirty out there!’ So we did have a bit of a train and they did something really beautiful where they bustled the train a bit, and ended up shortening it, but the dress was actually really heavy because it’s beaded and handmade and couture, literally handmade. Then we started with the hair, and then the headpiece. It was just like this really cool process, and I was like, ‘Oh my gosh, I get a wedding without having to pay for it, and without having to have a husband!’ It was really fun to go through all of that. 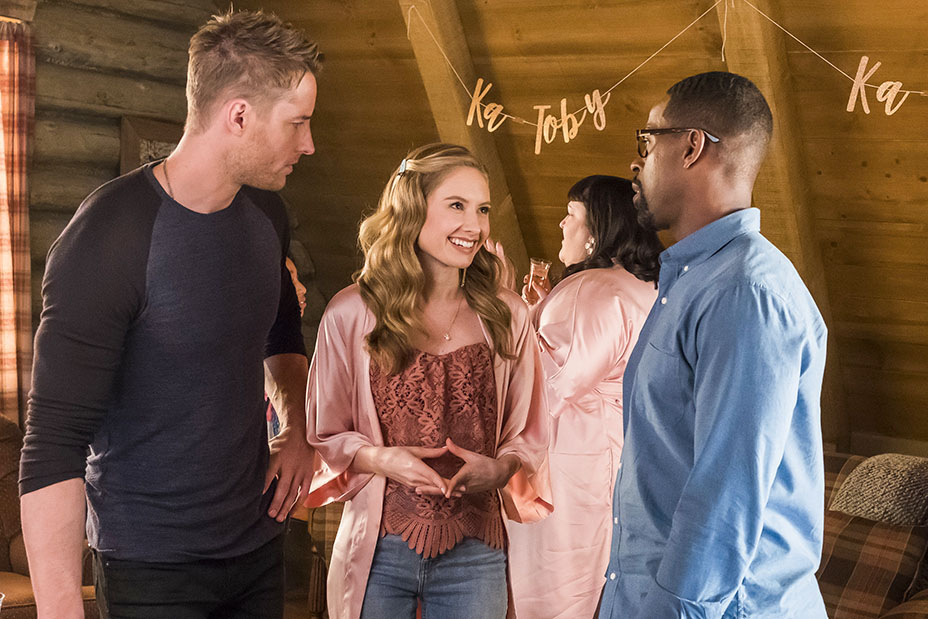 I wanted to do something special for having something old, something new, something borrowed, something blue. A lot of that, of course, is written into the script, but the something blue, I thought about having my nails done with a very light blue, so it wasn’t distracting, and then I put a J and a P on both of my pinkies, obviously for Jack Pearson. I just thought that it would be a nice little touch, and something that would be for me that Kate would do, and keep him close to her heart.

What can you say about the implications of Toby’s parents’ intervention and the flash forward?

Like most parents, we all are doing the best we can, and while it seems pretty harsh and sort of out of the blue, I believe that Toby’s parents have his best interests at heart — however, they have their own issues, as we all do. Sometimes we tend to project them on other people, and it’s just unfortunate because when there’s this heightened state of emotional play, be that a wedding or any of those events, things start to kind of bubble up. No parent wants to see their child in pain, and perhaps they know more about his past and his depression, and what triggers that, but I think it’s so beautiful that he’s like, ‘Yeah, I don’t care what you think. This woman has loved me, and we’ve loved each other through so many things, and I’m not perfect, and you’re not gonna tell me otherwise.’ So many of us do what our parents ask of us, or tell us to do, and though it comes from a good place, it’s not always the right thing for us, because it’s our life. As a parent, your job is having your heart live outside of your body, and you’re like, ‘OK, I want you to make the best decisions.’ But you have to let them falter, and fall, and have the highs and the lows.

'This Is Us' Stars, Creator on the NBC Drama's "Surreal" Popularity, Season 3 Plans

Obviously you don’t know much about season three, but will Kate and Toby’s desire to have a kid be affected by his struggle with depression?

I don’t know much, but I do know that they do want children in some capacity, and everything that happens in the relationship affects that process, or would affect that process, but I don’t know to what extent, or how, just yet. They’re figuring that out.

Looking back, what was one thing you enjoyed from season two? Kate’s friendship with Madison (Caitlin Thompson) was a highlight.

Caitlin is so great. They’re an unlikely pair, but have more in common than anybody would think, which is, of course, the layers of the friendship. We’ve all got something we’re contending with, or several things, and so while they would be an unexpected friendship, it really does work. There’s this humor between them where Madison is kind of kooky sometimes, but Kate appreciates that and it allows her to be kooky herself.

The finale was something really special because we all got to work together. I don’t get to work with Jon Huertas, who plays Miguel, very much, and contrary to what people think, he is so lovely and he’s just so much fun. Working with everybody was really, really fun, and also just the idea of a wedding was fun to be a part of.

Kate’s struggles with her weight were a major focus of the first season, but they took more of a backseat in season two. Do you feel that season two showed more of Kate’s inner life?

In the first couple of episodes, everybody is being introduced and you have to know a bit of a backstory to go forward. There are so many facets to everybody, whether they’re fictional or not, but I love that they’re exploring more of her music and coming through all of that together. But also her weight has been a really huge deal in her life, and so until she either comes to terms with it, either way, whether she wants to lose weight or she’s happy the way she is, it’s going to be an issue because that’s just life. That’s just how it goes. I trust the writers and Dan completely, so wherever she’s headed, I know that it’s going to be exciting and interesting and unconventional.

What did you think of the season two finale? Sound off in the comments section, below, and click here to read THR’s postmortem interview with co-showrunner Elizabeth Berger.