[Warning: This story contains spoilers from the “Number One” episode of NBC’s This Is Us.]

It’s hard to muster sympathy for an attractive, rich, famous TV star, but in the first of three This Is Us stand-alone episodes focusing on each of the Pearson family siblings, Justin Hartley had his most emotional hour yet as the troubled Kevin.

In “Number One,” the ailing ex-sitcom star continued his downward spiral, telling the students honoring him at his former high school to stop idolizing him. What’s more, Kevin almost filled a forged prescription from his high school classmate turned one-night-stand before breaking down in tears on her front lawn. The hour ended with Kevin heading to his brother Randall’s (Sterling K. Brown) house and attempting to confess his painkiller addiction.

Below, Hartley speaks with The Hollywood Reporter about his character’s substance abuse, finally working with This Is Us leading man Milo Ventimiglia and whether Kevin has hit rock- bottom.

This episode was a tough one to get through.

It’s a lot, isn’t it? Obviously it’s beautifully written, but in a way it’s also because that problem affects so many people. I don’t know anybody that doesn’t know one person that is affected by someone in their family or their friends by drugs or alcohol. It’s a tough one.

When Kevin was first introduced, it was hard to feel sympathy for him: sorry about your wonderful career and life, you rich, handsome TV star! But obviously it’s more complicated than that, as viewers saw in “Number One.”

That’s the whole crux of the [episode]. He can literally say, “These are my problems,” and people literally do [not listen]. I’m guilty of it, too. “I’m so sorry that your sushi is not at the right temperature. It’s awful, I’m sure.” No one thinks that he has real problems. Even when he talks about it people are like, “Uh, right, gotcha. Real tough. Real difficult.”

Viewers have learned a lot more about Kevin this season, but this one dug the deepest into his insecurities about how much pressure he feels being the first-born, golden child.

I think there are certain things that his parents put on him, like, “You’re OK, it’s fine,” and, “Kevin is gonna be fine, what’s the big deal?” But I think all of the stuff that [he feels pressure about] — “I have to be the first on this, I have to be the best here, I have to do that” — he put that on himself. That does come with being firstborn, my brother has told me. I’m second and so my brother is first. Being second sometimes you get left out and all of that. There anecdotal stories about the firstborn, the baby, the middle — all of that is true. 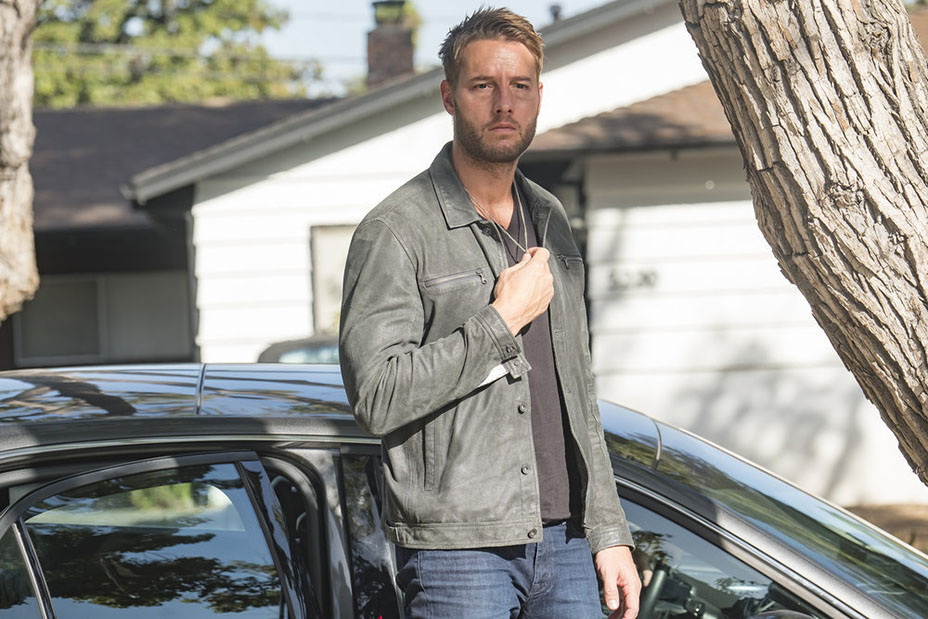 'This Is Us' Creator on Jack's Death Reveal: "There's a Big Story to Tell"

This was a huge, emotional episode for you, but it was also a big episode for Logan Shroyer, the actor who plays Kevin as a teen. Do you work with him at all on the character?

Not a ton. I love [all the teen actors]; we get along great. I don’t want to get in his way. We collaborate when we need to. He’s had a few questions and a few times I’ve had answers for him. A few times unfortunately I haven’t. For the most part I’ll have the answer for him but he does a fine job on his own. Interestingly enough, even though we are playing the same character, I think he gets a lot of guidance from Milo because he works so closely with him. The story that they are telling is this father-son relationship and Milo is the one that is there. The backstory is on the page and Logan does just a bang-up job of playing it. He’s got a really difficult job on the show because he plays this character that is not always the greatest guy to be around. He is volatile and he’s kind of pompous, and he’s a loner sometimes. He’s got a really difficult job, Logan does, and he pulls it off flawlessly. 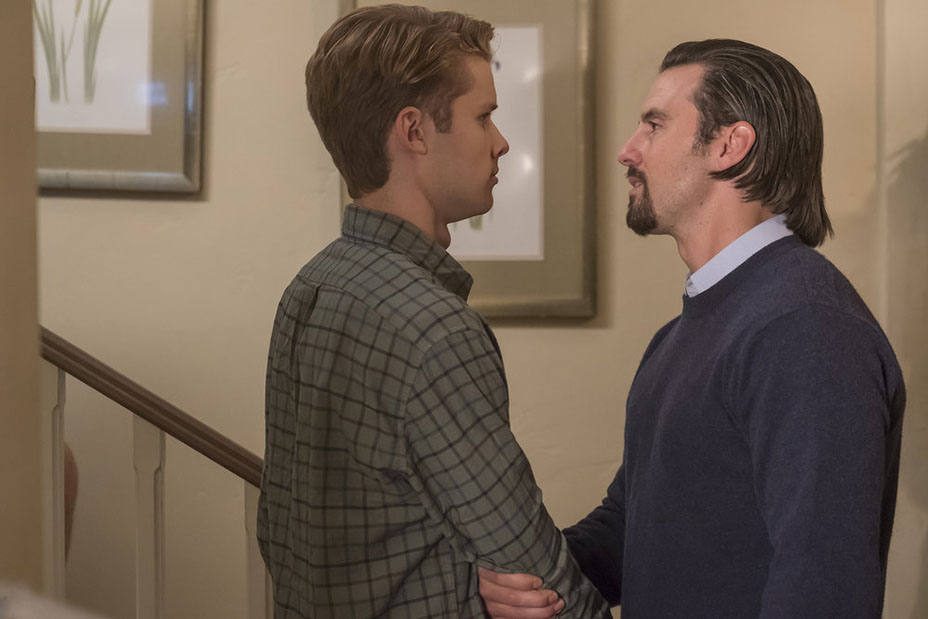 Speaking of Milo, this is the first time you shared a scene with him. What was that like?

It was really great because that was one of the most difficult scenes of the episode emotionally. There were so many things Kevin was doing in that scene. He was seeing his old coach for the first time. He was getting an award that he didn’t think he deserved. He was afraid to go up there and sort of say thank you. But then he was moved to the point of doing something completely different and explaining to these people, “Let me teach you a lesson. Don’t be like me. Don’t think for one second that anything that I’ve ever done is worth this. Be better.” So he is trying to salvage something from this and he is in this drunken, drugged state. Then he sees his father. He is hallucinating, for God’s sake. His father is saying these powerful things to him. He’s switching in out and from knowing that his father isn’t there to thinking that it really is his father, and then he hugs his father. There are so many things going on.

I’ve always said that the only bad thing about my character on this show is that I don’t get to work with Milo, because I adore him so much. I just took that. I was listening to the dialogue and to the speech and getting in my moment and then I looked up and I saw Milo. I got emotional. It was really easy for me to go there because I was finally getting to work with Milo. I thought it was beautifully done. It wasn’t a trick, like, “How do we get these two to work together?” I think it was just great storytelling.

'This Is Us' Star Breaks Down Shocking Reveal: It's "Uncharted Territory"

Did you know the direction his storyline would take when the season began?

Yes. We built him up so much and everything was going great. He had the girl, he had the job, he had the fame, he had the money. He was mending things with his brother. The relationship with his sister was great. He’s hanging with Stallone, and now you look at where he is and it’s just unbelievable how they’ve been able to write that story. What a downfall.

It was interesting when Charlotte, Kevin’s classmate, told him he was always nice to her in school, especially considering what he does after that and all the things that came before it. What did that moment do for him?

Well, not enough, obviously! In my mind, Kevin is there not because he’s lonely. He’s there because she’s a doctor and he understands [she might have access to painkillers]. “Well, Charlotte’s a doctor. That’s why she’s getting honored, for the work that she does. I bet you she has a prescription pad. I bet I can figure out a way to get some drugs from her. I probably don’t need to get a prescription pad as much as she probably just has some stuff at her place. If I can get back to her place, I can get the fix. That’s what I need right now.” He’s a drug addict. There’s one thing that he needs and he’s going to do whatever he has to do to get it. I think that’s the heartbreaking moment, when he’s on that path to doing unsavory things to get drugs. And he’s coming down off of them, so he’s having withdrawals. She springs this story on him about how he was always nice to her.

The bottom line is Kevin a good guy. He’s not a bad person. So, I think that kind of breaks his heart. It broke mine when I watched it. He’s not inherently a bad guy. He’s an addict. Good people do bad things sometimes. I think that’s what that was all about. And you get that little heartbreaking detail where it’s like, “Here’s this guy and we’re watching him do these horrible things and behave in this shitty way.” And then you get that little morsel where you’re reminded that Kevin is a good person. Inherently, he’s a good man. 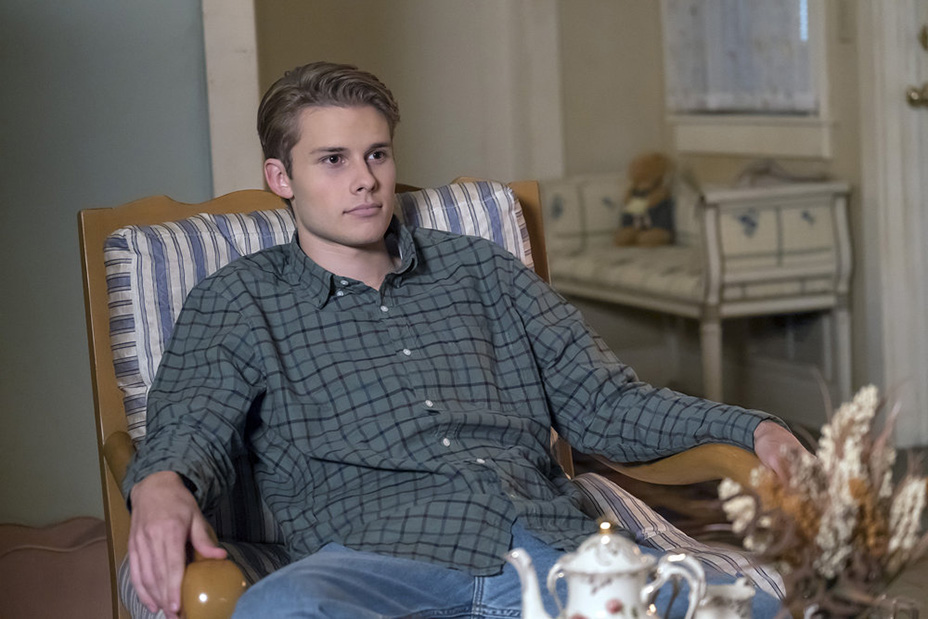 At the end of the episode, it seemed like Kevin had his window to confess his problems to Randall — and then it was shut when Randall told him Kate (Chrissy Metz) lost her baby. How will that affect him?

Yeah, that’s pretty much it. That was his window, and he was gonna open up. There’s gotta be a rock-bottom, right? It’s coming up. You’re absolutely right. That was his moment. I think he was gonna walk in there and say, “Dude, I need your help. Please help me.” I think he trusts Randall enough to know that he’s gonna get help from Randall, and then he quickly realizes that it’s not about him in the moment, and there he is on an island again. He was so close, too, to getting help, so close, and it couldn’t happen. Bad timing. We’re gonna see a few more moments where Kevin is not in a good way.

What can you say about how the next two episodes will play out as the focus turns to Kate and then Randall?

They take place during the same day, same time, so you get to see the three different perspectives of this moment in time. One through the eyes of Kevin, one through the eyes of Kate, one through the eyes of Randall. After this week, we tell the story through Kate’s eyes and [see] what happens with her. [K.J. and I] were talking about why she chose to end the episode like that, and she said…it was sort of a way to have a little mercy on our viewers, to maybe give them a week to prepare for that [devastating news]…. Because gosh, that’s a lot to ask of the audience. That’s a lot for our audience to take in. I feel bad for our audience a little bit with everything that we’re taking them through, but it’s very much worth it. These stories are great.

'This Is Us': Milo Ventimiglia Talks Jack's "Big Step" and Vietnam War Past

They totally do, and it’s OK. I’m honored. I’ll have a complete stranger come up to me and tell me pretty intimate details about their life — it has happened to me at airports; it’s happened to me everywhere. And at first, sometimes it’s a little bit like, “Whoa. Yeah, OK, let’s talk about your [problem], whatever it might be.” And then immediately you realize that this show is impacting people in a way that [you didn’t know it would]. The fact that you have complete strangers walk up to you and confide in you and tell you things about intimate details about their lives — in a good way, not in a creepy way — is pretty amazing. Whoever would have thought that?