“I almost thought this was a risky scene because it feels a bit like a thriller,” says creator Russell T. Davies. Despite It’s a Sin being a drama set against the AIDS epidemic, the way the show depicted the disease required compassion and care. “We had long conversations about how we mustn’t portray the disease as sinister, like the way in which it creeps into people’s lives in silence is sinister,” Davies continues. “We wanted to be respectful toward those to whom this happened — and this happens to this day — while at the same time telling a good story.”

Colin is It’s a Sin‘s most naive and innocent character, and his presence in the scene allows the audience to experience the scary uncertainty of HIV/AIDS. “We shot this before the pandemic, so that scene of putting on the PPE and all of the precautions by the hospital staff looks like we planned this around the modern age,” Davies says of the reference to Colin’s mask. “By chance, these things we’ve done as a period drama are playing out in our daily lives.”

“We did a lot of work earlier in the script to make sure that you love Henry,” Davies says. “You’re not judging the characters, you’re not shaming them — we took enormous efforts not to blame these characters for contracting HIV.”

“We’re very aware that we’re teaching a young audience, especially a young, queer audience, about what happened in the 1980s,” Davies notes. “We found ourselves teaching an audience of my age what had happened — even gay people my age. To some extent, people have forgotten what happened. It was a traumatic time, and a lot of memory has been closed off.” 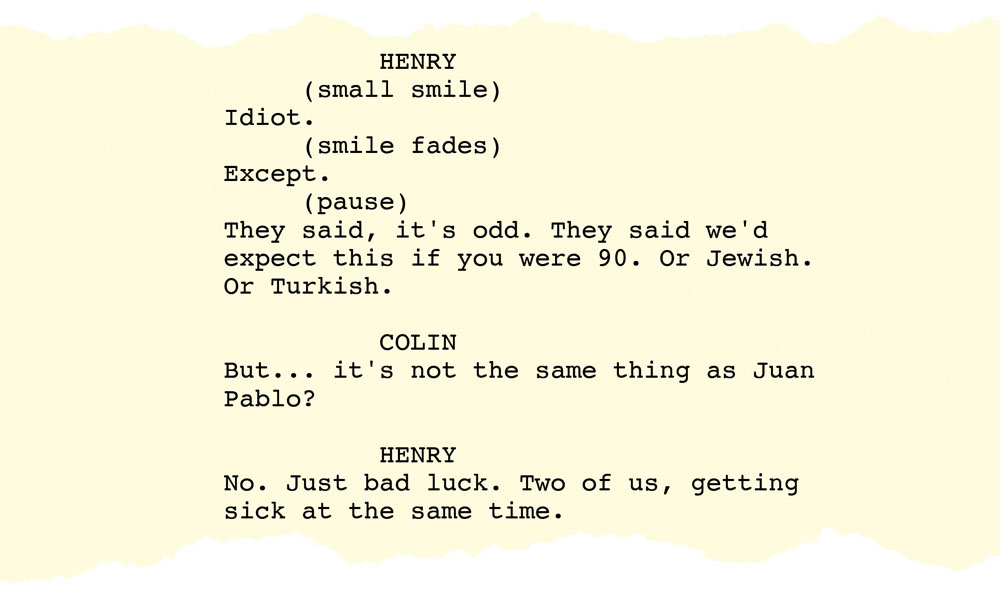 Davies says the performances from Howells and Harris really make the scene come alive. “What could have been a straightforward scene — the discovery of an early AIDS patient — becomes an enormous piece of television because of the quality of the acting.” Davies also notes that Howells made his screen debut in the series: “That’s Callum’s first role onscreen ever, opposite Neil Patrick Harris. There’s all that experience up against no experience whatsoever, and they’re both brilliant.”

Davies says that the scene was fully complete with a bit of music to underscore its power. “The person who never gets any credit on this show is our composer, Murray Gold,” Davies says of the moment Henry delivers this speech. “That’s a lovely speech and a lovely bit of camerawork, but in comes Murray with the perfect cue that just sets off that moment and makes it shine.”

“It’s amazing the amount of people who looked at this scene with disbelief,” Davies says of the reaction to the indignities Henry experiences in the hospital. “The fact that the door was locked, that Henry was on his own in his room, that the porter wouldn’t bring his food in. … I’ve talked to about 150 people [who lived through that time], and every single one of them told a story about the food not being brought into a hospital room.”