While the San Diego Convention Center floor is still the place to go for exclusive merch (and the best cosplay sightings), studios and networks are increasingly looking outside the building for the best marketing opportunities at Comic-Con.

Comic-Con: Watch All of the Big TV Trailers

Thrill-seekers lined up for hours in the San Diego sun before its official Thursday opening for a chance at the Jack Ryan experience, which required hardcore safety harnesses and took nearly 15 minutes per person to complete. The 4D VR experience included pretaped bits from Krasinski and co-star Wendell Pierce, along with repelling from an actual (stationary) helicopter and hurtling down a zipline. Alternatively, the Fire TV experience was a respite from the Thursday heat that also happened to feature many instagram opportunities and a photo op on the Iron Throne from HBO’s Game of Thrones. 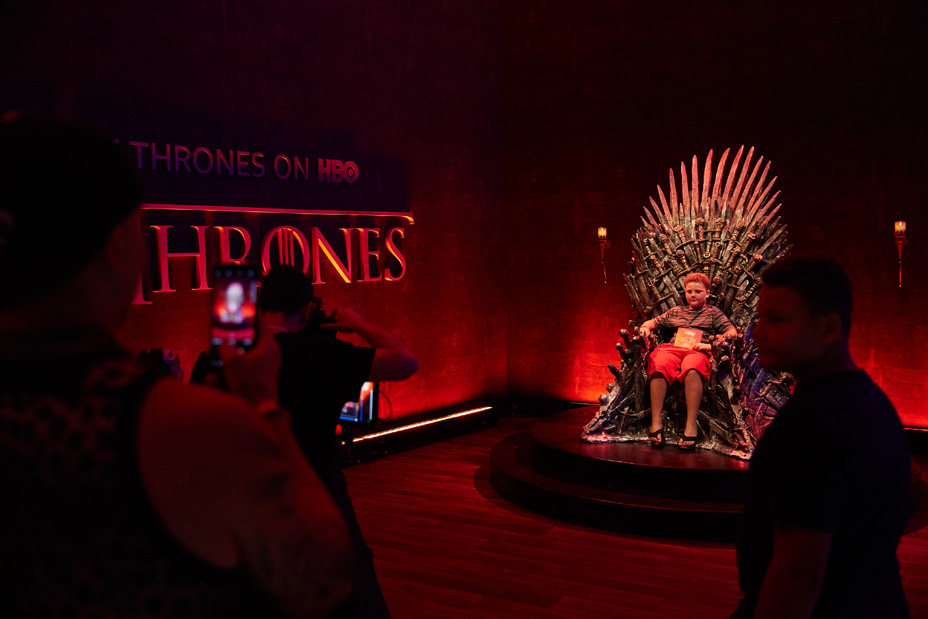 Lines stretched for two blocks throughout the entire day on Thursday, with even more (manageable) lines for each activation inside. (There was a surprisingly short wait for the liquid nitrogen-infused popcorn — an odd but delightful cold treat, however.) 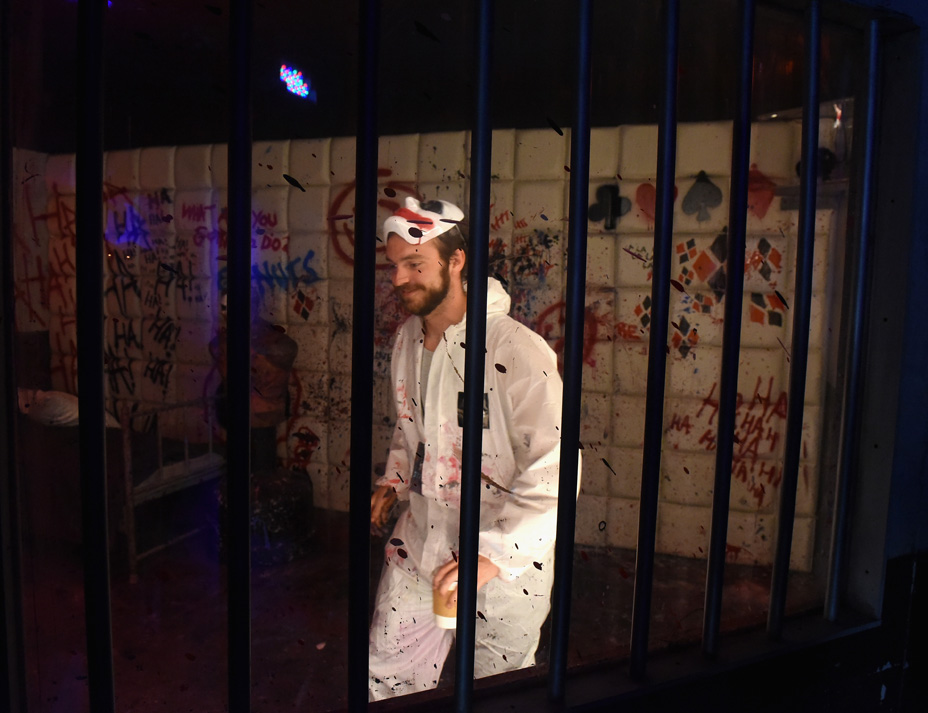 FX demoed multiple shows in its annual takeover of the lawn outside of the Hilton Bayfront hotel, FXHibition, with an immersive audiovisual experience for Legion, a gallery of oddities for the upcoming American Horror Story: Apocalypse, a motorcycle photo-op for Mayans MC and more. The ability to sign up beforehand kept lines at bay, but there wasn’t much fervor surrounding this or sister network Fox’s installments. Fox hosted a few different experiences on the lawn, with a Cosmos-themed dome video experience and a viral cell lab for midseason drama The Passage, along with Family Guy and Simpsons photo-ops. With so many other, in-depth experiences, the fact that the FXHibition was in its third year might have made it old hat for veteran attendees, who were more excited about the flashier, newer activations. 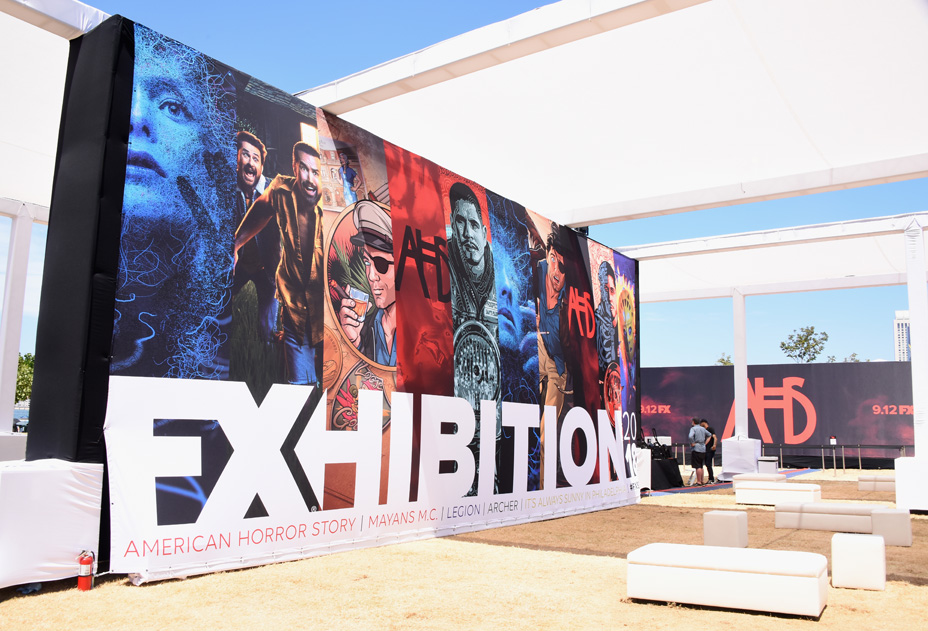 Fox went ultra-offsite on Friday with a Bob’s Burgers pop-up at the Mission Valley Shake Shack — a 20-minute ride away. Buses ushered 50 fans at a time to the patio of the restaurant, where they ate an exclusive burger of the day (a la the running, pun-tastic gag on the show): The Can I Have Your Slaw-Tograph Burger? (with American cheese, BBQ pulled pork, pickles and jalapeno and scallion slaw). Die-hard fans found via the show’s biggest fan site got the first crack, while others could line up near Petco Park for a shot at getting on the bus. Luckily, Friday’s overcast weather was a bit more hospitable than Thursday’s bright sunshine (ideal for getting the perfect instagram of each activation, not ideal for avoiding sunburn).

The Walking Dead‘s “Deadquarters” was much the same as last year, but that didn’t stop the massive lines from forming for a walk through the Sanctuary and a slide into a pit of walkers, as well as a glimpse of real props from the show. For USA Network’s upcoming horror series The Purge, fans lined up to receive fake $20 dollar bills to spend on real Purge-themed merch at Purge City, a bright, sterile, Party City-esque store ostensibly stocked with Purge supplies (and a cast of eager improv actors — almost creepier in intensity than the idea of a Purge itself). 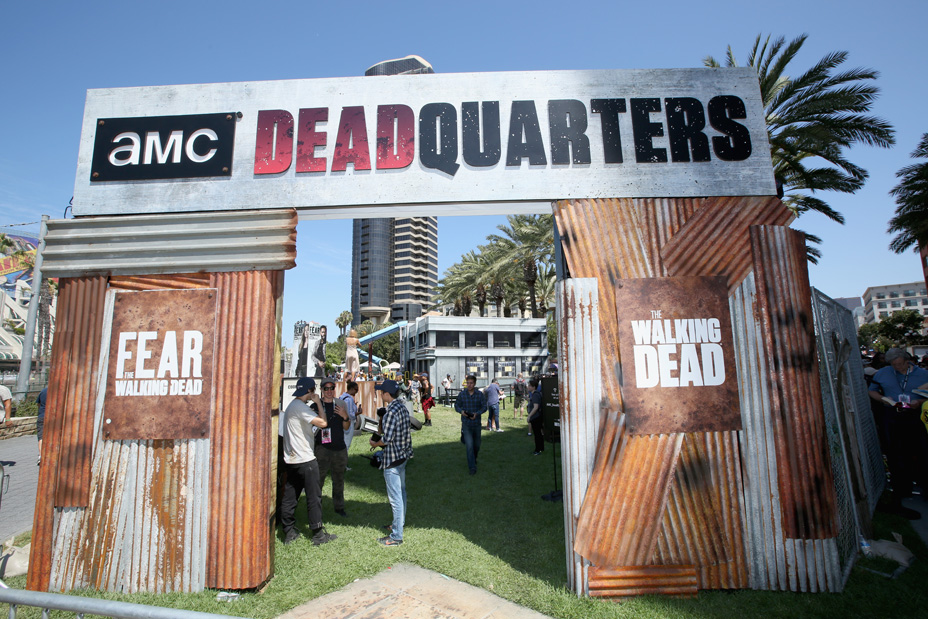 Many of the biggest activations used RFID bracelets to track people’s progress, including Amazon Prime, Jack Ryan, DC Universe, and even NBC’s The Good Place experience. The latter put participants into the Good Place from early in the series, a quaint neighborhood where something was askew and someone wasn’t supposed to be there — or that’s what it seemed like, since the concept wasn’t quite fully formed. The special video filmed by stars Ted Danson and D’Arcy Carden still delighted fans, however, as did the photo op of the building itself (set in NBC’s prime SDCC real estate right in front of the Hard Rock Hotel).

Another trend of 2018: escape rooms. There were escape room challenges in Amazon’s Jack Ryan activation, the DC Universe experience, Audience Network’s activation for Mr. Mercedes‘ second season (an immersive experience that allowed fans to walk through at their own pace and participate as much or as little as they wanted — a bonus compared to some ultra-long presentations fans were forced to sit through, and they could also watch the premiere a full month early if they wanted), along with a Cartman-themed adventure for South Park and one for Facebook Watch’s Sacred Lies.

Just sampled the @BobsBurgersFOX @shakeshack #SDCC burger and am now in a food coma. I honestly don’t even know how I’m posting this. pic.twitter.com/pUv13ybGvy

There were a few single-serve experiences, like Syfy’s human claw machine; a complicated photo op (involving a bungee) for Marvel’s Cloak & Dagger; History Channel’s Project Blue Book headquarters; Discovery Channel’s 40-foot inflatable “Sharkzilla”; and Hulu’s quaint New England bed and breakfast/haunted house pegged to its upcoming Stephen King anthology series, Castle Rock. The haunted house integrated elements from the show’s first season — which has yet to bow — into the immersive experience, which saw lines of at least two hours on Friday morning (and a “30-minute” wait on Friday was actually more like three hours). The Cloak & Dagger, Project Blue Book and Shark Week activations were all part of “The Experience,” a new branded area in the parking lot across from Petco Park that has always housed activations, just never under an official catch-all name. A VIP area provided shade, but the entire thing could have done with more shaded areas for everyone and some branded charging stations, perhaps.

For many networks, the activations came at the expense of a presence on the Con floor. Amazon, in its first-ever year attending, skipped the convention center entirely. Fox and Warner Bros. had their usual booths, as did The Walking Dead. But the biggest TV presence on the floor (or at least the most visible) was Nickelodeon, with a giant booth, multiple photo-ops and exclusive merchandise. It is worth wondering whether Nickelodeon will be the next network to branch out of the Convention Center, or if it’ll stick to the great indoors for 2019.

How SXSW, Comic-Con Fueled the Rise of Activation Culture