The episode explored Nate’s tumultuous relationship with his father (played by Eric Dane), his complicated dynamic with girlfriend Maddy (Alexa Demie) and his willingness to go to the greatest lengths to protect her, stalking and severely beating a young man after Maddy said he had raped her.

Elordi, star of Netflix’s The Kissing Booth, caught up with The Hollywood Reporter to break down that brutal scene and discuss dealing with on-set nudity, taking on the portrayal of toxic masculinity and moving on from the hit rom-com.

What was it like to film the scene where Nate beats up Tyler, the man who Maddy says raped her?

It was one of the scenes I was most excited to shoot. It was interesting because Lukas [Gage] — the actor who plays Tyler —and I are actually quite close in real life, so we spent weeks apart from each other. We wouldn’t even go and have a beer together because we wanted to cultivate an environment that was intense and kind of like we didn’t know each other very well. It was quite enjoyable to film because in the beginning, there’s something kind of comical about it, and it’s one of the main parts where you get to see [Nate’s] psychopathic nature without him actually being deeply upset, I suppose. He’s relishing the moment and the success of what he’s done, so it was actually, surprisingly, one of the easiest scenes to fall into.

Where is Nate emotionally in that moment?

He’s quite methodical, and I think his emotions get the better of him when he’s dealing with women. His girlfriend, Maddy, makes him get quite unhinged and then every time he sees Jules he isn’t really sure how he feels, so it’s more loaded emotionally. With Tyler, I think it was the kind of thing where he isn’t intimidated or frightened by him; he’s just like a chess piece that has to be moved. While it’s built from anger, I think he’s actually quite calm, and that’s why he can talk to him so long in the room, because he knows exactly how it’s going to go. He’s laid out every single option and exactly what he needs, so it’s almost enjoyable. It’s kind of like a lion playing with a mouse.

He seems to get darkest around Maddy. Why does she have such a hold on him?

Alexa and I spoke early on and we decided they were in love, in love with each other, it was kind of just as simple as that for us. They chose each other. The funny thing about her is she is on the receiving end of a lot of his violence, but she’s quite an interesting character herself, and they go together in their own poisonous way. She’s toxic herself in her own relationships, and it’s funny because that gets overshadowed a lot; she’s kind of awful to him as well because he’s awful to her. I think that’s how they complement each other, in the toxicity, and I think that’s what strays from what his dad has done to him. That’s just him as a teenager and both of them caught in a relationship that they know isn’t good but that they can’t stop. It’s the be-all and end-all when you’re a teenager, it’s like every person you love is high-intensity, and it’s the end of the world if you’re not with them.

In this episode, you also have some intense sex scenes and a locker room scene where you’re surrounded by naked men. How was that to shoot? And how did having an intimacy coordinator on set impact the situation?

Yeah, I think she had to review every single penis before putting it on the show. For me, it was interesting because that scene was actually very real, and the look on my face and the way that I was feeling was very real. The energy in the room of that many big men jumping and yelling and slapping you — nudity aside — I’m nothing like Nate, and it was so intense. I didn’t realize locker rooms could be so intense, but it was actually quite hilarious. I don’t care about that kind of stuff, and it’s funny reading all of the reviews now — everyone’s like, “There’s this many penises.” But when you’re there, it was just hilarious. I think it’s a funny scene, and I’ll definitely never forget it. 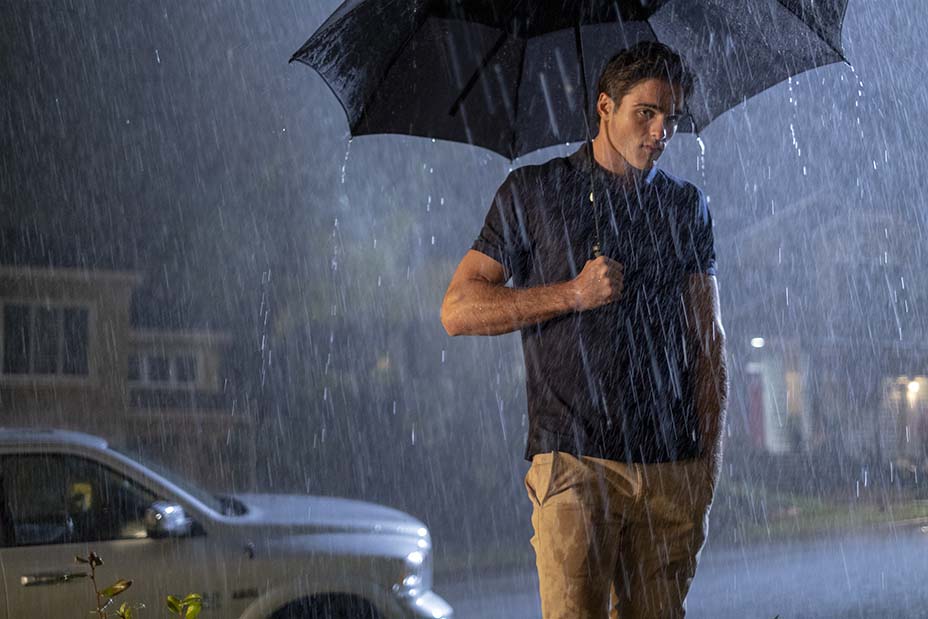 We learn a lot about Nate’s childhood and upbringing in this episode. What was your reaction to learning about his past?

It’s probably the biggest part where I’ve found empathy for him. I think it’s really sad, even aside from finding the sex tapes, just the way his father speaks to him about having to win all the time and needing to be on top and in control. It made me sad and made me have a lot of empathy for him, knowing that everyone on the surface wants to damn him because of his actions, which are awful, and not that it’s an excuse, but he has a very, very solid reason as to why he behaves the way he behaves. So kind of finding that out after the pilot when you might think he’s just more of a cliche, you realize that he has a backstory as well and a reason why he does what he does.

We also see more about his relationship with his father. How does that father-son dynamic impact who he has become?

I think it consumes him. I think his relationship with his dad sort of informs all of his behavior, down to the relationship he has with Maddy — it’s kind of dominant and controlling. His dad has such a need for order and it’s been passed down to him and he does the same thing, tries to keep everything in order. I think his dad is the reason for 100 percent of his problems.

Nate is kind of the stereotypical jock in the first episode, but we see there’s a lot more beneath the surface. Why was that important to you and the show, to really dive deeper than most teen shows do?

For me, it was really important because I would never play another jock onscreen if it wasn’t more. I’ve read a lot of stuff that’s like “the jock, the jock,” so I’m excited for people to see it. It’s important to me because in the term “stereotypical jock” and “toxic masculinity,” that kind of character can get written off straightaway, the same way as that kid can get written off in real life. If you are that person, all of a sudden you’re always that guy, and no one has ever really taken a beat to think about where that person comes from. You’re always the bad guy when you’re the jock or have toxic masculinity, but I think it’s important to show that that person comes from somewhere as well. It’s almost like an unspoken thing, and they’re usually used as a trope to show a villain or a humorous character, when really there is a real boy there who has fallen victim to toxic masculinity that has been passed down, and there’s a reason why he is how he is. And there’s so much more thought that has to go into it when you’re playing it. It’s more of a person than a Hollywood trope.

It’s two completely different experiences. The Kissing Booth was the first film I ever made — it was sort of my ticket to Hollywood, so I was really grateful for that. It’s almost like righting my wrongs a little bit too, because the character in The Kissing Booth is awful and it’s never really explained. He’s kind of idolized and made into a hero, so I suppose this show is showing why.

The episode ends with the reveal that Nate is the one texting Jules on the dating app. What’s next for the two of them?

It’s kind of the question that I asked myself and Sam [Levinson, Euphoria creator] and I talked about all season. I think it’s beautiful. I think that texting sequence is beautiful, and as for what’s to come, I don’t know. Truly, I’m not even saying that in the contractual Hollywood way. I truly don’t know.

A lot has been made about the sex and drugs aspect of the show, but what do you hope Euphoria says about high school today?

At first I just wanted people to watch it and enjoy the show, but after reading everything, I hope it wakes some people up. I’ve read a lot of things. I literally read a tweet that was like, “Why can’t we make a show about a bunch of kids who read the Bible, abstain from sex and are good to their parents?” But it wasn’t a joke, they were literally saying that’s what the show should be about. I hope for the kids it lets them know that we know — to the 14-, 15-, 16-year-olds in high school — I know how it is, and I’m there with you. I’ve seen a lot of parents’ tweets that are like, “Not my kid, not at my high school,” and I think it’s cool to not to tell them what to do or how to do it, but let them know that we believe them and we know.