[This story contains spoilers from the season four finale of Jane the Virgin.]

In hindsight, viewers should have seen Jane the Virgin‘s big season four finale twist coming: The CW’s quirky dramedy, about a 20-something teacher (Gina Rodriguez) who is accidentally artificially inseminated with her hotelier boss’s baby, was based on the Venezuelan telenovela Juana la Virgen and has always acknowledged its soap opera roots not with winks and nods but with straight-up meta storylines.

In JTV‘s fourth season, telenovela star Rogelio de la Vega (Jaime Camil) has focused on adapting his famous series for an American audience. Since the pilot, Jane has broken up with her hot cop boyfriend, Michael (Brett Dier), for her sexy boss/baby daddy, Rafael (Justin Baldoni). Then she got back together with Michael, married, lost her virginity and was widowed. Years later, she eventually got back together with Rafael and was about to move in with him. In the finale, while discussing the move and her impending engagement, Jane’s grandmother Alba (Yvonne Coll) joked that she was now at the point where, if she were living in a telenovela, she’d discover Raf was actually her brother, or something.

No, the two lovebirds are not related — but the end of the episode revealed one heck of a telenovela-worthy twist: Michael, dead since the middle of season three, is still alive! (Insert dramatic music here.)

The twist is something creator Jennie Snyder Urman tells The Hollywood Reporter she had been considering since the beginning of her carefully plotted series, but the idea only solidified at the end of the third season.

“This was something that I left open as a possibility, but I had to really think through where we were going, how to shape the show toward the ending and what we wanted to do,” she says. “I sat down with Brett about a year ago and told him just to wait, that it was going to happen. But this was something that, once it coalesced in my mind, really shifted things a little bit and felt like the right move and the right way to set things up and to return to themes and to give a big telenovela twist as we head into the fifth season.”

While star Rodriguez has said that season five will be Jane the Virgin‘s last, Urman would not say whether it was officially the end or not. Below, she discusses the big twist, status of guest stars Brooke Shields and Rosario Dawson for the potential final season, and the episode’s other big twist. 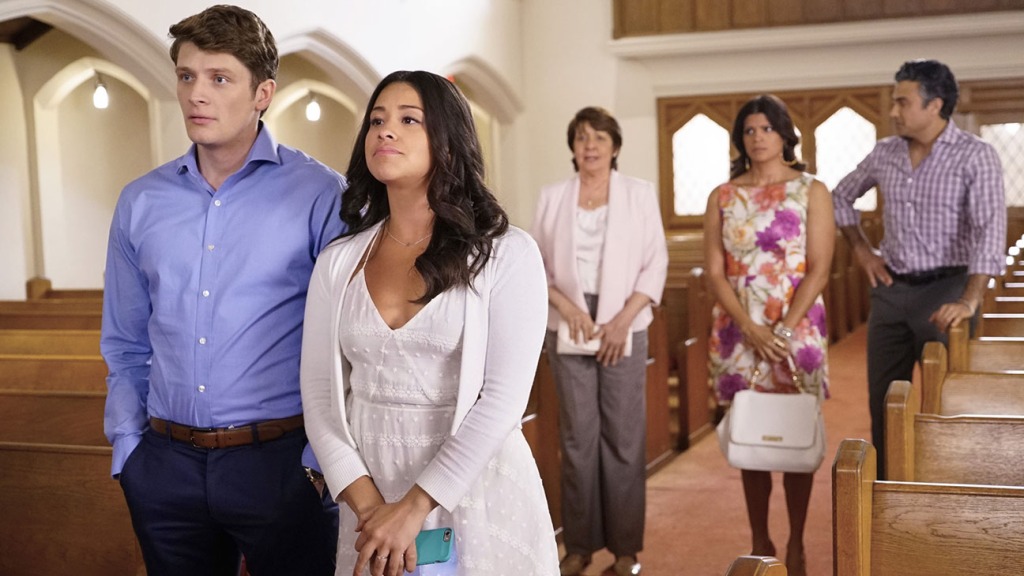 There have been hints throughout the season. There was one in the middle of the season that talked about a return from the dead, and that’s a classic telenovela trope. There’s a few [twists] that we have as writers in our back pocket that we haven’t played yet, and this is one of them. And there were small foreshadows. Small. We couldn’t do too much because the audience is really savvy and picks up on anything Michael related. But there were definitely a few moments that this was hinted at.

How much did Brett Dier know about his character’s return?

He definitely didn’t know at the end of season two when I told him what would happen in the middle of season three. But he and I sat down, it was probably around this time or May of last year. We went out for lunch and I told him the plan.

What did Gina know?

After the season wraps up, [Gina and I] usually sit down and talk, and I tell her some of the things I’m thinking of. I told her this about a year ago as well, so she’s known. I wanted to play it close to the vest and surprise everyone, because everyone loves Brett so much. We’re such a family, so we wanted a surprise for our actors as well and our production and our crew. We knew that everybody would be so excited to see him, so we redacted the last pages of the script and he came to the table read secretly and stood outside the door. And then at a very dramatic moment, I got up and opened the door. He walked in and everybody freaked out. It was very fun.

So they reacted how the viewers are going to react?

Yeah. I mean, they were suspicious because he had a fake name on the call sheet and the last page of the script was missing when I gave it to everyone, so everybody knew it was going to be something big. But I think most people were pretty surprised when he walked through the door. And he and I had obviously been talking about it for a long time, so I was excited. The writers were excited. Gina was thrilled and, yeah, everybody kind of lost their mind.

Now that the final season has been confirmed —

I don’t think it’s the official confirmation. I’m not at liberty to confirm or deny, but I will say that the ending is dictated by the creative, which has been a really great thing. I’ve talked about it with CBS Television Studios [which produces the show] and The CW and that ending is planned. But I am not really at liberty to say when it is at this point.

But you are writing to a specific ending that you have in mind and you know what it is?

Definitely. A bunch of pieces are coming together. We are heading toward the final chapter, certainly. Jane started to write at the end of this episode and it was the first words from the pilot. Her stories are coming together. The three books that we’ve seen her work on; her love triangle — I mean, if this is indeed Michael — is back but in a totally different form. We have reset things and the pieces are coming into place for how the ending will play out ultimately.

The finale set up arcs for Shields and Dawson next season. Shields plays Rogelio’s co-star/collaborator on the American telenovela remake, and Dawson plays the lawyer girlfriend of Rafael’s other baby mama, Petra (Yael Grobglas). Are they both coming back?

Oh, I hope so. Certainly, we want to play out the aftermath of who J.R. shot. [Before the Michael cliffhanger, Dawson’s character wrestled with and ultimately shot a gunman who was about to kill Petra.] And how lucky are we to have Rosario? It’s been just incredible. And I have a lot more I want to do on that story and a lot more I want to do with Brooke Shields — or “River” Fields, I should say. I can’t say enough about Brooke, who has been just game for everything and such a delight. Her character against Rogelio, the dynamic, I love, and I want them to shoot their pilot in the opening premiere. And that will provide some of the backdrop to the story that we’re telling in the premiere. 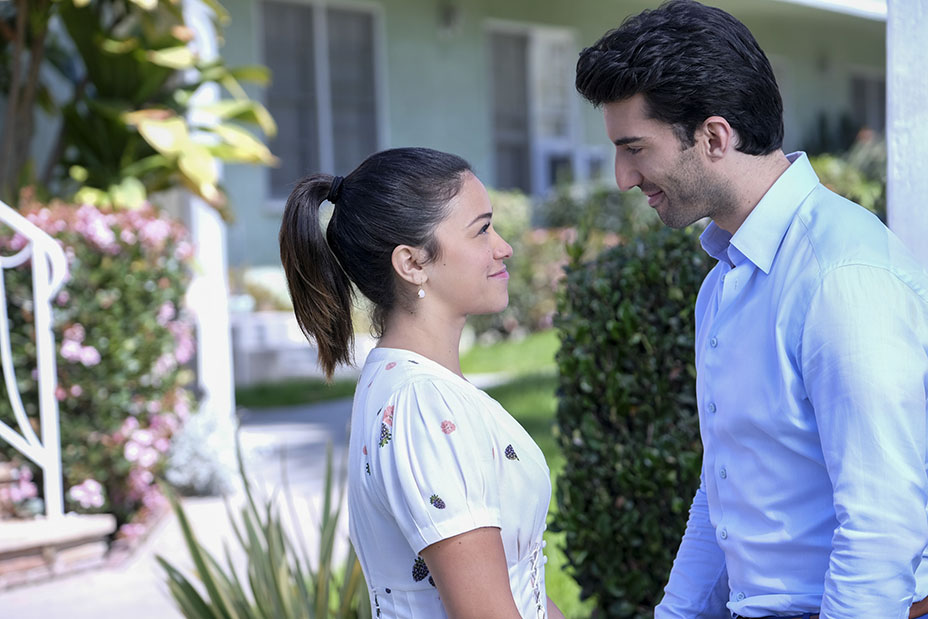 The finale also revealed that Petra actually did kill her evil twin sister. Telenovelas, man! Talk about that big turn.

Her sister had done a lot of horrible things to her over the years, and at that moment she threatened [Petra’s] daughters and Petra didn’t think. She pushed. And I think what happened next was survival. Petra’s a survivor and she knew she had to keep moving forward. She didn’t expect to fall in love with her lawyer and that was a development in her emotional life. But she had been hiding this fact, and she certainly didn’t know that J.R. was going to give up her career for her. You know, had she known that, perhaps her decision would have been different, but J.R. did that without telling her. Obviously, this was something that Petra hoped would never come out.

If season five is the end of Jane the Virgin, what has it been like for you creatively working with The CW?

They’ve always told me to tell them what was in my mind in terms of the story and the storytelling. So that’s been the biggest gift and relief because I’ve felt that we don’t need to tread water. We can keep going. I don’t have to overstay our welcome in terms of storytelling. This story’s built with an ending, and I want to get to it. And I want to get to it in a way that doesn’t undermine the characters, make them tread water for too long, lets them move things ahead in a healthy way. So whenever this ending is, it’s something that came from creative, which I think allows us a lot of freedom in terms of the pace of the story and letting it unfold and not spending time trying to come up with things to keep it going. We’re able to tell the story that we want to tell and exit at the end.

In addition to all the love triangles and soap opera drama, Jane has also featured a very prominent immigration storyline that culminated with Jane’s grandmother Alba (Yvonne Coll) getting her American citizenship in the season five finale. Has the way you’ve told or the importance of that storyline changed between the Obama and Trump administrations?

I think we’ll always be saying something about that because we’re talking about a family that you’ve come to know and come to love and hopefully that family is a counterbalance to some of the awful rhetoric coming out of our administration. I think just watching them is a powerful thing. Alba became a citizen, and that was a really victorious moment. And now she has her own telenovela-esque story happening where she’s getting married, where she loves him and he’s not in love with her, but might he be? We’re trying to always make the personal political and the political personal and intertwine those. And really I think just by showcasing three strong Latino women at the center of our show, we’re trying to counterbalance just some of the hate coming out of that small part of Washington, hopefully.

The finale shows just how much Alba loves America and how she’s proud to be an American.

[She has] come on such a long journey and it’s a fulfillment of something that she’s hoped for, for many years. It’s a really moving scene, I think, for her to get there, and moving for her family and also emotional that they don’t have to live in fear anymore and how destabilizing that is. I think it was definitely worthy of a big celebration.

Getting back to that Michael twist, though — by the end of the series, will there be a choice between Rafael and Michael?

Jane the Virgin has been renewed for a fifth season on The CW.