At an industry conference on Tuesday, Lachlan Murdoch — the chief executive of Fox News parent company Fox Corp. — said the network has not been hurt financially by boycott efforts that have targeted the advertisers that sponsor opinion shows like Tucker Carlson Tonight, The Ingraham Angle and Justice w/ Judge Jeanine.

“The boycotts themselves are not having a financial impact of any significance,” Murdoch said at the event.

But, Pirro’s show has noticeably lost advertising since she returned from a three-week-long suspension on March 30 for comments she made about Muslim Rep. Ilhan Omar (D-MN), which spurred a backlash and boycott.

In the six episodes leading up to her March 9 show, when Pirro questioned Omar’s commitment to the U.S. Constitution, Justice w/ Judge Jeanine averaged 43 advertisements per night. But, in the six episodes Pirro has hosted since March 30, it has averaged just 34.8 ads per show, a 19 percent decline, according to a Hollywood Reporter review.

Her March 9 episode featured 49 advertisements, compared to a recent low of 29 ads on Saturday, April 6, though her most recent episode — on May 11 — included 43 spots from brands like Jeep and Mitsubishi, her best advertising showing in more than two months.

Few sponsors have publicly pledged to stop advertising on Pirro’s show, though those that have pulled out — personal finance company NerdWallet, pharmaceutical company Novo Nordisk, online marketplace Letgo, and Botox-maker Allergan — have not returned to the show.

Marianne Gambelli, who leads ad sales for Fox Corp. and Fox News, has said historically that fleeing advertisers return after things calm down — or are redirected to the network’s less-watched news shows.

Bedding company SHEEX, which announced on March 12 that it would stop advertising on Tucker Carlson’s primetime show, has advertised twice on Pirro’s show since she returned from suspension.

Pirro’s show has recently featured a slight increase in so-called “house” ads promoting Fox programming, mirroring Carlson’s weekday show after a boycott that began in mid-December over the host’s comments on immigration.

In March, Fox News said in a statement that Pirro’s comments about Omar “do not reflect those of the network” and have been “addressed” with her. (The network did not provide comment on Pirro’s advertising load when asked this week.)

One of Pirro’s most high-profile backers has been President Donald Trump, who chided the news network for suspending his longtime friend and said in March that “Fox must stay strong and fight back with vigor.”

On Fox Corp.’s first investor day on May 9, CEO Suzanne Scott provided an update on the network’s advertising forecast for the year. “Our ability to consistently deliver live, large, and upscale and engaged audiences has resulted in consistent and stable growth in our advertising revenue,” she said. “This fiscal year is on track to be our highest advertising revenue year ever, and going forward, we expect advertising to continue to be a driver of business across all platforms.” 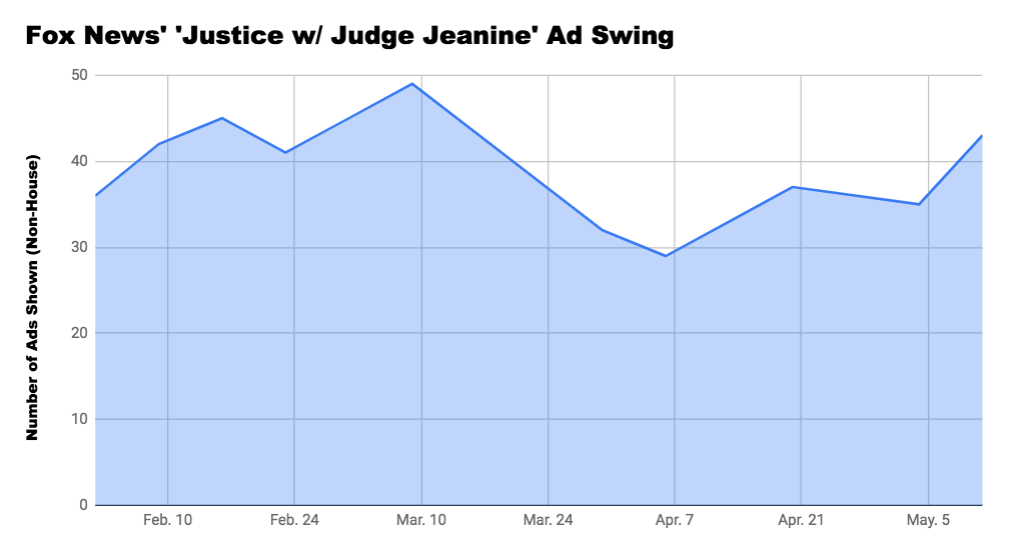