The actress, now the salty matriarch on Black-ish, has appeared in A Different World, The Fresh Prince of Bel Air, Girlfriends and Living Single — almost always the mother or an aunt. And those are just her TV credits. She also starred in What’s Love Got to Do With It, The Preacher’s Wife and The Princess and the Frog — again, usually tackling maternal roles. So the title of her new memoir, The Mother of Black Hollywood, came quite naturally.

Lewis, up for a Screen Actors Guild Award alongside her Black-ish co-stars on Jan. 21, spoke with THR at the tail end of 2017. In addition to offering up her thoughts on what she wants the book to give readers, she also talked about playing the mother to actress only a few years her junior, why she won’t audition anymore and the Black-ish script that made her cry.

How Costumes in 'Black-ish,' 'Hacks,' 'Only Murders in the Building' and 'Pam & Tommy' Helped Land the Jokes

Anthony Anderson Reacts to Emmy Snubs for Final 'Black-ish' Season: "Can You Believe That S***?"

What motivated the book?

But you didn’t really make the mess you mention.

I think we’re all responsible. We all have to take responsibility. Whenever we even pick up a plastic bottle, we’re contributing to the mess. When you know better, you do better. So, yes, I’m responsible too. Here is my gift back to you, to say everything is going to be all right. Stay alive and keep moving. Get to it, find your passion and don’t let anything stop you. Do what you have to do, and dream! Dream, bitch!

How long did you work on the book?

Two years. I kept a diary, day-to-day, since the seventh grade because I knew this day would come. I had to read 63 books just to write this one. Darling, it was quite the read.

Were you given the label of “The Mother of Black Hollywood?”

It’s who I am. I’m the mother of black Hollywood. I’ve played everybody’s mama from Tupac to Whitney to Gabrielle Union to, oh my gosh … The list goes on and on. I’m either the aunt or the mother. In What’s Love Got To Do With It, I was Tina Turner’s mama. That’s what started it. 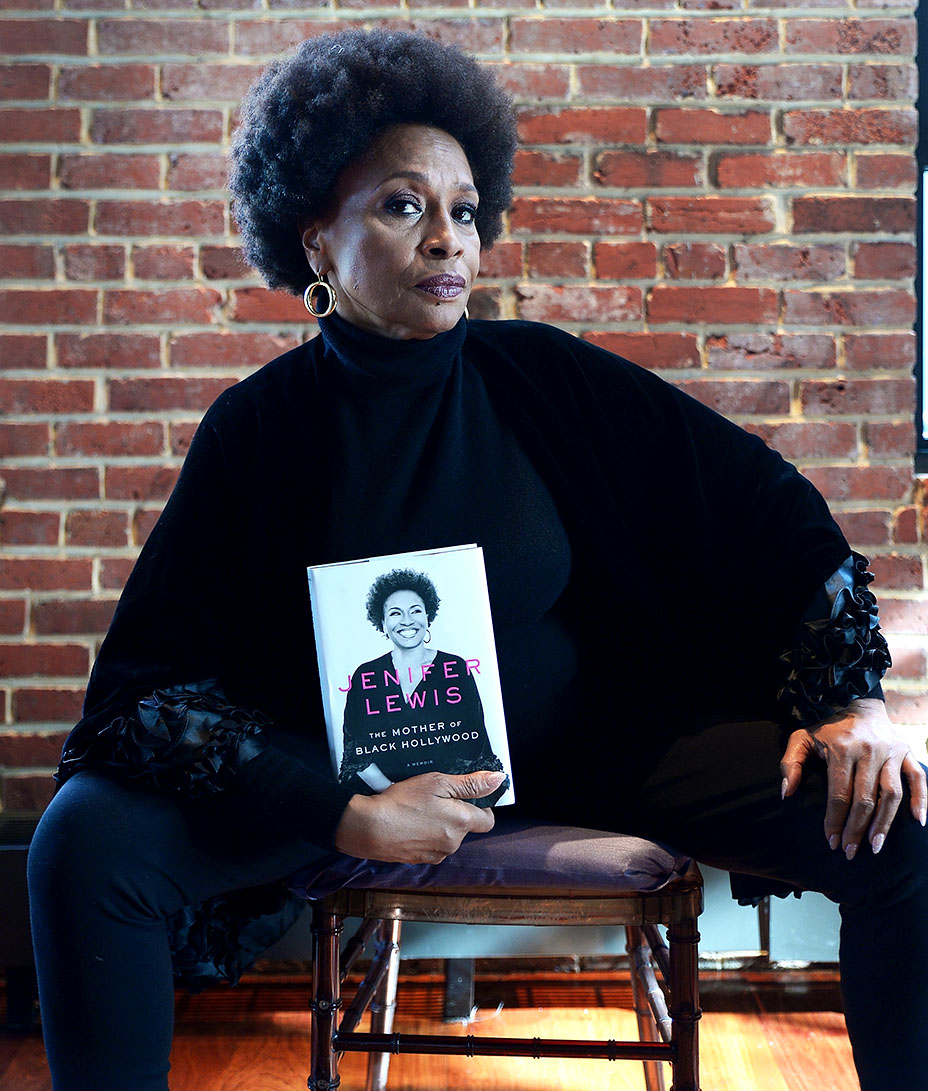 Was that the smallest age difference, with Angela Bassett, when you were playing the mother?

I think I was about five years older than Whitney. I forget how many years I was Angela, couldn’t think how old she is.

I didn’t care. I was never a starlet, maybe in my youth, but here’s the thing. I’m an actress, I’m a comedian. I’m an athlete, for God’s sake. I still play racquetball, and I can ride my bike 10 miles.

At what point did you stop auditioning and people started asking for you specifically?

I’ll still audition if it’s someone like Steven Spielberg or someone like that. I’ll audition my ass off. But I haven’t auditioned in a long time. Somebody called me in one time to audition for a mother and I said, “Are you out of your fucking mind?” I’m the motherfucker, bitch. You either want Jenifer Lewis or you don’t.

What would you say you’re most recognized for?

I think The Fresh Prince of Bel Air. People loved me on that show. And Black-ish, of course. Good lord, Black-ish! It’s brought a new level of fame. When you’re on one of the major networks, on primetime, you are in their living rooms right after dinner.

You weren’t originally supposed to be such a big part of the show.

I wasn’t in the original cast, and then I came on as a guest star. Then they asked me to become a regular. That shit is the cherry on my career! Black-ish is saying something. These are the modern subjects that we need to embrace now. Black-ish is needed all over the world. It’s time for African-Americans to be seen in this light. It’s time for our history to be told. I just got back from Iceland. Some bitch in a snowsuit comes running up to me on a glacier, like, “Oh, you’re on Black-ish!” Oh my god, bitch, we’re in a glacier. Get the fuck out of here!

How have you digested some of the more serious topics on Black-ish?

Kenya Barris is a fucking genius. And unafraid. And I just happen to be on the show at a time when I am unafraid and try to tell the truth [about] what’s really going on in the political climate right now. When I got the script for “Juneteenth,” I sobbed. I was just so grateful that we’ve come this far. I was appreciative to be a part of it. And I actually went over to the ABC executives and thanked them for pushing the boundaries. When I get Black-ish scripts, I usually laugh out loud. And, honey, nobody makes me laugh. I make you laugh.

What’s been your response to all the women in the industry coming forward to talk about abuse and parity?

I am so proud of everybody coming forward. Oh my god, you have no idea the freedom, the healing … Oooh, I’m getting chills. I’m just excited about it. I’m excited that women have been emboldened and that they’re coming forward. This is the beginning of the healing.

What’s next for Jenifer Lewis?

That one-woman show on Broadway. That will be next. And there’s a lot of exciting things happening right now, young man, but I can’t speak on them because they’re in development. I’m a very happy girl.