For the final season of Marvel’s Jessica Jones, showrunner Melissa Rosenberg found herself and her fellow writers revisiting a key part of her career: several seasons on Showtime’s serial killer drama Dexter.

“Our show is very noir; we’ve always approached it that way. So this was a really good opportunity to do that,” Rosenberg told The Hollywood Reporter. “Plus my fellow showrunner was Scott Reynolds [who also worked on Dexter], and so we really had a lot of that background in our approach to stuff.”

This meant that in developing the storyline surrounding Sallinger (Jeremy Bobb), a new foe for Jessica (Krysten Ritter) who doesn’t have superpowers but does use his hyper-intelligence and training to kill repeatedly and get away with it, they were on familiar turf. “We would stop and go, wait a minute, didn’t we do that story on Dexter?” she said. “We were constantly to trying to do something new.”

Rosenberg came into the third season knowing that it would be her last on the show, thanks to a reported eight-figure overall deal with Warner Bros., but she began to sense that it would be the last season for the show after the cancellation of Daredevil, a decision made by Netflix soon after the launch of that show’s third season.

“That’s when we knew that this was clearly a business decision and that we would be on the chopping block as well,” she said. “But that was quite early on, so we were able to make adjustments to really finish the storytelling, and it ended really quite perfectly, actually.”

Jessica Jones, whose third season debuted June 14, is the last of Netflix’s Marvel series to air following the streamer cutting ties with Disney-owned Marvel. Netflix is making a push to own more of its content, and Disney is preparing to launch its Disney+ streaming service in November. There has been speculation that some of the Marvel series could end up on Disney+, something hinted at by Marvel TV head Jeph Loeb when Jessica Jones and The Punisher were canceled to complete Netflix’s purge of the Marvel shows.

“Our network partner may have decided they no longer want to continue telling the tales of these great characters — but you know Marvel better than that,” Loeb said. “As Matthew Murdock’s dad once said, ‘The measure of a man is not how he gets knocked to the mat, it’s how he gets back up.’ To be continued.”

As part of bringing the series full circle with the finale, Jessica Jones was able to bring back Mike Colter as Luke Cage, a fitting choice given that the character made his debut in the show’s first season before going on to lead his own spinoff. The writers came up with the idea during the story breaking process, and Rosenberg said that “we would have been prepared to try to re-break it without him. But fortunately it all worked out.”

Rosenberg said they didn’t consider bringing in other established Marvel characters for the finale, “because the group is an organic fit within our world. And our world’s so different from the other characters’ worlds that it can become jarring to our show, to have someone step in from another world. But because Mike Colter was part of the conception of our world, he blends quite perfectly.” 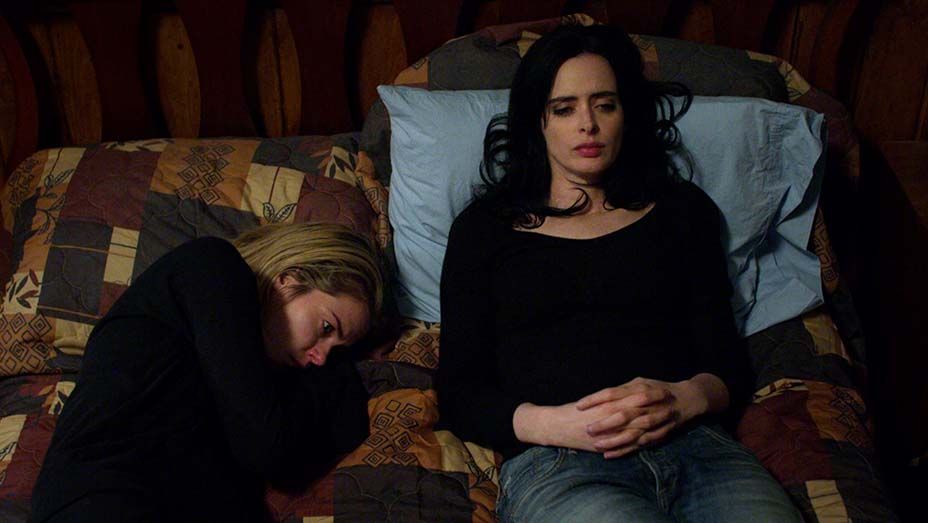 Another even tinier cameo from a past castmember comes in the final moments of the series, as the taunting voice of Jessica Jones’ greatest foe, the deceased Kilgrave (David Tennant), can be heard applauding her choice to leave New York behind (which then spurs her to change her mind).

Rosenberg said that as soon as it became clear that this would be the final season, she knew they would want at least a touch of Kilgrave. “It was then that we thought, ‘Oh, you know, that would be perfect and he exists in her mind.’ So it’s the completion of a story as well,” she said.

In order to get Tennant involved, episode director Neasa Hardiman had to work remotely with the actor, Rosenberg said: “He recorded it in London, and [Hardiman] was in New York, directing him over the phone. He went and he gave us many different takes. He’s so hilarious and versatile.”

And then Le Tigre’s “Keep On Livin'” kicks in as the final credits roll. “I love that song. That was in editing — we were in post and realizing we really wanted an anthem of sorts that played in tune with Jessica’s character, and [Reynolds] turned me onto that song,” Rosenberg said. “It was like, ‘Oh my God, that’s perfect.’ Female rockers. It was just absolutely the way to go.”

In moving forward, Rosenberg said what attracted her to moving to Warner Bros. was what she’d heard about “what a great working environment it is, first of all. And they have a lot of really interesting projects and the opportunity to tell, to push myself into, new territory, is exciting. It’s anxiety-provoking as well. You always hope you’re gonna rise to the challenge. But I think a writer can get stale if you just keep telling the same story over and over again. So, you know, I’m looking forward to shaking it up a little bit.”

She does anticipate continuing to work with pre-established IP (a long-time trend for her career), and noted that “I love character-driven genre, that’s sort of where I live and breathe. So I’ll probably always play in that sandbox.”

That said, despite joining its corporate family, she doesn’t think the DC Comics universe is one she’ll dive into right away: “I need to like separate things out because I’m such a Marvel fan. I really need to, because it’s a very different animal.”

She is excited about the prospects of continuing to write and create for streaming platforms, because, as she said, “I’m not a natural fit for network television. I really thrive on continuing storylines and digging into the darker recesses of the human experience. And I think that network is at its best when it’s got a case-of-the-week thing happening, which is just not who I am. The streaming services really lend themselves to the kind of stories I like to tell. So I’ll probably spend a lot of time there.”

That doesn’t mean she’s opposed to the idea: “I mean, never say never. I would love to have some series that ran for, you know, 18 years and I could retire, save a small country. That would be awesome. For sure. I just don’t think that’s what is in my wheelhouse.”

Funnily enough, Rosenberg originally developed Jessica Jones as a broadcast TV show, beginning back in 2010 under a deal she had with ABC Studios. “The network bought it, and I said to them going in, ‘Are you sure, because this is pretty dark?’ And they’re like, ‘Oh, yeah, yeah, yeah.’ And then I wrote the pilot for them and they’re like, ‘Wow, this is pretty dark,'” she said. “So it just kind of sat there for a bit, then Jeph Loeb created this behemoth over at Netflix with Marvel, and it was the absolute perfect place for it. So sometimes the biggest letdowns are a blessing.”

The original pilot Rosenberg wrote for ABC ended up being “not wildly different” from what would eventually make its debut on Netflix in November 2015. “I always knew I wanted to tell the Kilgrave story, I wanted her background to be coming out of trauma, and I knew I wanted the Luke Cage character,” she said. “Some of the surrounding characters evolved over time — that was a first draft, so it took on a slightly different shape, but it was all there.”

She did, however, plan on building a case-of-the-week element into the series when it was intended for broadcast, which wasn’t necessary for streaming. “When I went to Netflix it’s like, ‘Oh no, no, no, we want the cliffhanger. We want it,'” she said. “People are watching these things 30 seconds later, so it’s a very different kind of storytelling.”

Rosenberg, while leaving Marvel behind, is happy that Jessica Jones feels like a complete series. “I’m proud of our series. You know, the three seasons feel to me like a really complete journey for our characters. We’ve really had the opportunity to just take them to a place that was satisfying. It’s been a really exciting ride, both for the characters and for me,” she said.

“There’s always a million stories that you can tell with really rich characters. We had our fair share of those. But you want to be careful about overstaying one’s welcome. You can keep characters going well beyond when they should. I’ve been on those shows as well.”