For Rachael Taylor’s Trish Walker, the second season of Jessica Jones was all kinds of “cray cray.”

Creator and showrunner Melissa Rosenberg’s Marvel series, which debuted its entire second season March 8 on Netflix, sees the celebrity occasionally known as Patsy sinking deeper and deeper into darkness: relapsing into addiction through the use of a power-enhancing inhaler, as one example, breaking off a serious relationship and abandoning her daytime talk show due to career dissatisfaction as another. It all builds toward Trish’s central desire: to become a hero, just like Jessica.

With that in mind, the final stretch of season two sees Trish setting out to gain powers of her own — a quest that nearly ends in her own death, and very much does end in the death of Alisa (Janet McTeer), Jessica’s inadvertently monstrous mother, gunned down in cold blood by none other than Trish. Alisa’s death is a shocking moment both in the context of the otherwise peaceful and somber scene, and also in what it means for the show’s central relationship between Jessica and Trish moving forward. As Jessica says in the final minutes of the season, every time she looks at Trish moving forward, all she will see is the woman who killed her mother.

For their part, Jessica Jones viewers will likely see the same thing in Trish as what the title character sees — but they also see something more, now that the former host of “Trish Talk” is starting to exhibit powers of her own. The catlike reflexes demonstrated in Trish’s final scene are an obvious nod to the character’s roots as the Marvel superhero Hellcat, a development one hopes and expects to see expanded upon in a likely third season.

Speaking with The Hollywood Reporter, Rachael Taylor opened up about Trish’s rocky road through the second season of Jessica Jones, how her storyline mirrored the #MeToo movement and the pitfalls of celebrity at points, the violent twist in the season finale, and more … beginning with the “cray cray” beginning. 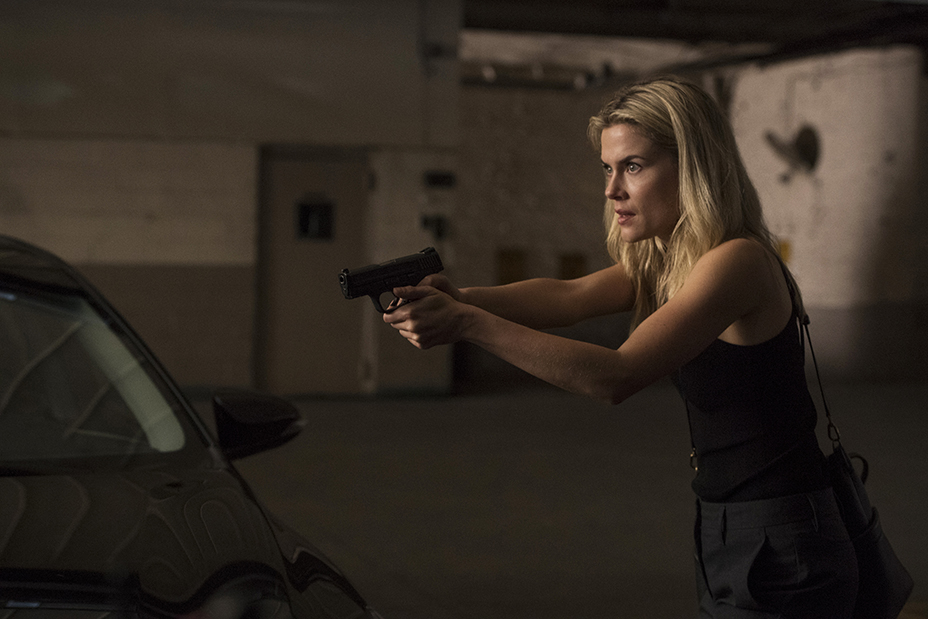 Let’s start with the earliest point in which we see Trish, even if it comes about halfway into the season: “AKA I Want Your Cray Cray,” the seventh episode of the season, which flashes back to who Jessica and Trish were long before we met them. For Trish, she’s just branched out into pop music, and is celebrating the release of the song from which the episode gets its name …

It’s a sufficiently addictive song. Good luck getting it out of your head. It took me three or four months to shed it. (Laughs.) But I think episode seven is my favorite episode of the season. I feel like season two is really all about diving deeper and darker into the personal histories and personal traumas of all of our characters. Getting a direct window into a very different version of Trish Walker was very exciting. For the first five or six episodes, Trish is going in a number of different directions, in terms of her appetite for wanting “more.” There’s nothing she’s not prepared to do to feel more powerful or be closer to Jessica, and for me, episode seven is a window into why she’s the way she is. She’s been made to feel in her life that she was not respected. She was an addict. It emotionally explains a lot about what season two is, up to that point. Does that make sense?

It does, because Trish certainly goes through the wringer in season two: career growing pains, relapse through the inhaler, her shifting friendship with Jessica — especially given the ending of the season — and seemingly developing some powers of her own.

We really had to break her down in order to eventually, hopefully, build her back up. I love playing a character who on the surface seems very polished. You can look at her on one hand and think, “She really has it all. She has a radio show, she has a relative degree of fame due to her career as a child star, she has money …” But she also has a gaping hole in her, a yearning to be more than she is. She wants to be taken seriously. It’s just not happening, particularly as a journalist. She’s tired of towing the corporate line at Trish Talk. She wants to matter. That was the key to her for me this season, playing with the varying shades of how she wants to matter. By the end of the season, it coagulates into her one true desire: her desire for powers. For the first few episodes, her desire for more keeps changing. She wants to be a journalist, she wants to help people, she wants to help Jessica … all of that is true, but at the end of the season, we see that what she really wants is to be a superhero. She wants to be like Jessica.

Did that feel true to what you believed about Trish, having played her in the first season of Jessica Jones and also in The Defenders — that everything was building toward her desire to help people in such an external way?

It took on a different shape than I thought it would take on. I always felt from the very beginning, even from the first episode of season one, that Trish was a very earnest character. She really wants to save the world. She’s quite serious about that intention. There’s an appetite to her, even in season one, where she errs on the side of being more supportive of Jessica and doesn’t take it to as dark a place as she does in season two. I always felt she was a character with an unholy ambition, and an envy of Jessica that was right under the surface. It doesn’t cancel out her deep love and loyalty to her friend, but I could always see shades of her feeling less than.

How did you feel about the show’s depiction of celebrity through Trish? There’s a scene near the end of the season in which a fan wants to pose for a picture with Trish, and Trish is not having it, for instance …

I did a lot of research into the experience of being a child star, because that’s not my experience. In reading about it and using my own imagination, I put a lot of attention to the idea: “What is it like to be world famous at the time you’re 8? And what’s it like to see that attention ebb and flow? Where does the frustration build for the character, and feed into the one idea of needing to matter?” She has a lot of shame about her celebrity. I really liked the way Melissa Rosenberg has written Trish being 99 percent polite with her fans. (Laughs.) She’s a good sport, most of the time. This is her language. She doesn’t know better than needing to be polite to people as she walks down the street. That’s how she’s operated in the world since she was a kid. But I love how season two starts to show that fracture, her desire for power becoming greater than what she’s always known. 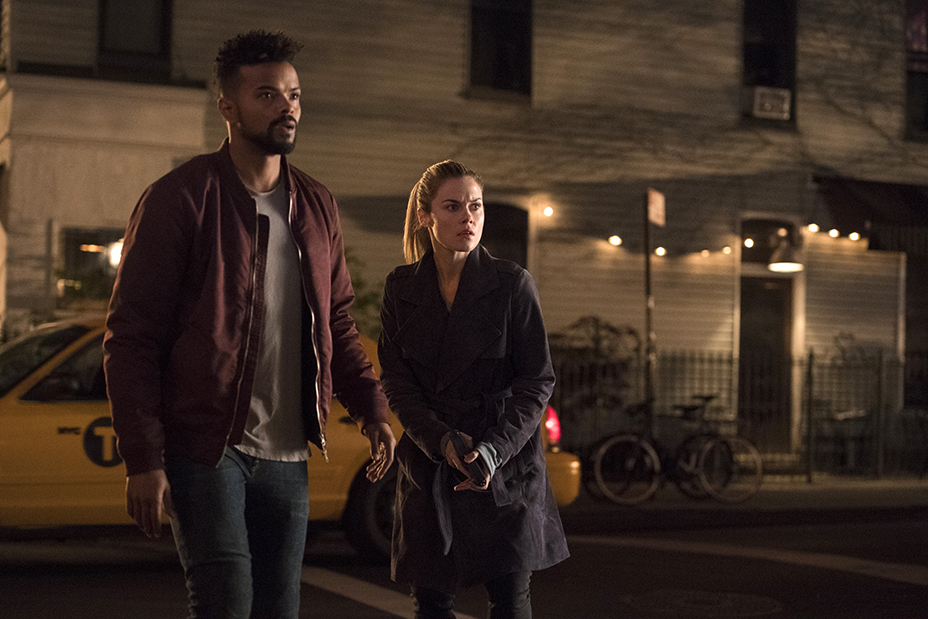 What was your reaction when you realized Jessica Jones was paralleling the Me Too movement early on in the season, with Trish’s history with a Hollywood executive — a storyline that was written and shot months before the movement began?

Krysten [Ritter], Carrie-Anne [Moss] and I were all texting each other back and forth: “Wow. I guess what we put on the screen months ago has now become incredibly timely.” I think it speaks to Melissa’s ability to relay what’s going on in culture and the female experience in an authentic and honest way. Our show has always had this theme of female empowerment and how women use their voices, and how women take up space in the world, and how women seek agency, and the complications of what happens when they get it. That’s been the undercurrent of the show since its inception. If we can contribute to any of these conversations, Me Too and Time’s Up, in any way? That’s something I’m very proud of. I’m very proud to be part of a show that holds up a mirror for our times. I definitely see that it’s more timely now than ever.

The season focuses on Jessica’s relationship with her mother — a relationship that ends when Trish pulls the trigger on Alisa. What was your reaction when you found out about Trish’s role in killing Jessica’s mom?

Our show doesn’t have binary ideas of good and bad. In some respects, my favorite thing about season two is that while Alisa is the big bad, every character is wrestling with the monster within. It’s more complicated than there being one bad guy. One view is that Trish is not always the good girl in this season. There are shades of her compromising Jessica and causing her pain. For me, the through line was always that Trish wanted to save Jessica in the way Jessica has saved Trish in the past. At any cost, really. It doesn’t matter that she knows it will cause Jessica great pain. The overriding drive is that Trish has to save Jessica. As an actor, I can see both arguments: I can see how Alisa was a danger to Jessica and Trish was only trying to help, and I can see how Trish is inserting herself into Jessica’s life and only wanting to matter and play the hero. There are a couple of takes on it. I love that about our show. Our characters’ motivations are not always simple. They often have more than one desire or drive operating at the same time. It’s like a playground for an actor.

What do you hope is next for Trish, now that she has her own powers, and now that she’s so estranged from Jessica?

When we were shooting season two, one of the things I landed on is that you fall in love with your character as an actor. You want to protect them. But season two was about not protecting Trish. I had to break her down in order to try to build her back up. She derails at a number of moments, which is super fun to play, but in season three, I want her to reconnect with Jessica and get back on the same page. I love the big and rich scenes I get to play with Krysten Ritter; I’ve learned so much from working with her. The female friendship between Trish and Jessica is the heartbeat of the show. I love that we bring a friendship to the screen that’s not a sanitized version of female friendship. It’s messy and complicated. To some degree, they want what the other one has. For Trish, there are shades of jealousy, and I think that’s the case for Jessica as well. I don’t think I’ll ever get tired of going deeper into that friendship.

What did you think of Trish’s arc in season two? Sound off in the comments below, and keep following our Jessica Jones coverage for more season two stories.