[This story contains spoilers from the season two finale of Netflix’s Jessica Jones.]

“That thing about having your cake and eating it too? Whoever said that probably didn’t have a cake that killed people.”

As usual, Krysten Ritter’s sardonic private eye in Netflix’s Marvel drama Jessica Jones describes her present predicament in extremely colorful fashion — and as usual, her present predicament involves something deeply personal, much to her chagrin. The second season of Jessica Jones, now streaming on Netflix, sees Ritter’s hard-drinking and harder-hitting hero again battling internal demons in the form of an external one. Much like the first season, the avatar of her adversity is someone with whom she shares an intensely painful history. Unlike Kilgrave (David Tennant), however, the new antagonist in Jessica’s life isn’t someone she can physically fight quite so easily.

[Final warning if you haven’t finished your season two Jessica Jones binge: massive spoilers are ahead. Consider yourself fully warned.] 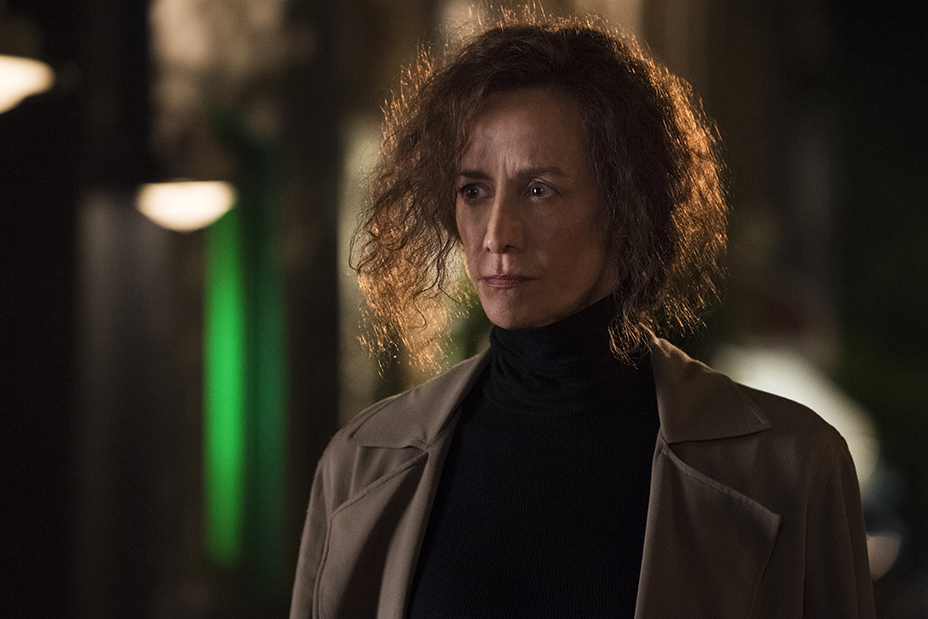 At the end of the sixth episode of the season, Jessica and viewers alike learn the truth about Janet McTeer’s menacing and monstrous antagonist: she’s actually Alisa Campbell Jones, Jessica’s mother. As it turns out, Alisa also survived the car crash that claimed the lives of Jessica’s father and brother — and like Jessica, Alisa was healed through IGH experiments, which has left her with enhanced strength, as well as enhanced rage. Unlike the first season, in which Jessica strove tirelessly to stop the psychopath who once terrorized her from terrorizing anyone else, season two sees Jessica reconciling with having to save someone she deeply loves from her own uncorked anger and power.

In the end, she’s unsuccessful: Jessica and Alisa nearly run away together, but when she finally realizes the extent of how that would impact her daughter, Alisa essentially accepts the end of her life and offers Jessica some sweet parting words — shortly before she’s shot in the head by Trish Walker (Rachael Taylor), creating a rift between Jessica and her veritable sister that will be hard to reverse in a likely third season of the Marvel favorite.

Speaking with The Hollywood Reporter, McTeer opened up about sitting on the secret of her character’s true identity, the process behind crafting Alisa and Jessica’s relationship, working with showrunner Melissa Rosenberg on grounding Alisa in reality and more.

How has it been, sitting on the secret of who Alisa really is?

It’s been absolutely awesome. (Laughs.) It’s so much fun to do a character where nobody knows who she is. Everything is so secret. You don’t do any press. Everyone leaves you alone. You go to your garden in Maine and you take your dog out for a walk. It’s been great! I think some people get [skeptical] about the secrecy, but the whole point about the secrecy is to make it more enjoyable for the watcher. The point of me not telling anybody — or nobody telling anybody what I’m playing — is so that when people watch it, it’s a surprise. Hopefully, that makes the watching experience better.

Were you paying any attention to speculation about the character?

I know some people have been thinking, “Ooh, is she this? Is she that? Is she the other?” But I’ve hid behind my hands. I hope people have enjoyed themselves with that!

What were your initial conversations with Melissa Rosenberg like?

We talked very specifically about this: if you’re playing this particular character, who is so complicated and complex with so much big stuff, then it has to be rooted in a serious reality. We talked at great length about the IGH experiments. What is it? What would it do to you? How could you compare it to something you could realistically relate to — like a brain injury, or a stroke? Something that would give you an anxiousness about yourself or society or the world, where you would find yourself in a position where you don’t know yourself anymore. Where you’ve had a breakdown. We talked about how all of that could feed into the making of the character, so we have a fully rounded character, not just someone who gets cross a lot.

What was your entry point into Alisa?

The gateway to understanding her was her protectiveness, and what I just touched upon: the damage of someone who has had a crisis. Someone who thought they knew themselves, and then they had this crisis, and they reinvented their lives in a certain way. There’s a trauma, a PTSD.

What do you remember about collaborating with Krysten on the character and the mother-daughter relationship?

Both of us are very forensic. That’s helpful. You’re building it with each other as you go along. You do each episode in order, and that really helps. It really builds. Because we’re playing people who have been estranged, it really helps. It all happened very organically as we went along.

We talked a lot about how you would go back immediately to where you imagined [a relationship] going, and then the reality of it. How it’s a real contradiction and a real struggle. You imagine how it would be marvelous and wonderful to meet someone you haven’t seen for a long time, since you were a teenager, and then they’re grumpy and easily irritated, and you think, “Oh, that’s not how I imagined this.” That was very much a part of it. We talked very much about damaged people who aren’t good at relationships. We wanted to give it a lot of places where we could go that would involve really hard work.

What do you imagine Alisa expected from her relationship with Jessica, before it became a reality?

Right! Or maybe I’ll be a grandma? All the usual stuff. And then that’s not what she gets at all.

'Jessica Jones' Season 2 Trailer: How the Marvel Hero's Past Will Define Her Future

With superhero stories, we’re used to the hero going up against a very clear villain. While Alisa commits some horrible acts, the viewer is invited to understand where she comes from. This season is less about fighting a “bad guy,” and more about saving or protecting the antagonist.

It’s very much about how good people do bad things, and bad people do good things. It’s all a little bit more complicated, which is why I found it so enticing. It’s not so easy. As you say, it’s often easy to say who is the bad guy and who is the good guy. It’s not so easy when the bad guy line and the good guy line gets a little bit muddied. I really found that complex and interesting.

Before she reunites with Jessica, Alisa is grounded in her relationship with Dr. Karl Malus (Callum Keith Rennie), which subverts everything we initially expect about them. They are actually very loving and warm people, even if Malus has made some bad choices.

We were trying to find something unexpected. The series has set up that the people who did these experiments are bad people. Then you meet someone who is supposedly a bad person, and you find out they’re not so bad. If you explore that and take it further, then you ask, “Well, why do they do what they do?” It adds another layer of complication, which makes it interesting.

What did you think of your final scene in the series: alone with Jessica on the Ferris wheel, sharing one final moment of love, before being shot by Trish?

I loved the fact that just when you thought there might be a moment of togetherness, we’ve reached the end. I think it’s shocking in a really good way. I thought for her character, she’s gone so far that we’ve slightly realized she doesn’t quite realize how far she’s gone herself — until she does. And at that point, she realizes, “I can’t do this. I thought we could run away. I thought we could live in the desert or somewhere, but we can’t. I thought we could have this amazing life. But no, we can’t. I have done these things in this world. Even though I thought they were right? Maybe they weren’t. I’m not going to make it. But you know what? That’s alright, because [Jessica] is amazing.” I thought that was a great place to come to. She’s at peace when she dies. She’s not in a rage. It was quite nice, because once you’ve explored all of the rage of a character, you know that she has done all of these things, so where else is there to go? We’ve come to terms with you, your life, what you’ve done. Now, we’re at peace. I thought it was a very nice place to end the character.

Would you want to return for a third season, even given the ending?

I couldn’t possibly tell you that. (Laughs.) I don’t want to give anything away. I do think the story is done, but I had such a lovely time. … I loved working with all of these fabulous women. Melissa is amazing. Krysten is fabulous. Rachael and Carrie … the list goes on and on. All of these great women, and all of the directors … I’ll be fair: there were some amazing guys on there, too! But to have a female showrunner was particularly thrilling. She’s someone who is my own age, writing to my age, writing to the sensibility of someone who has that history with life. I felt it was really helpful. It was a delightful set. An incredibly hard-working set. It was really good fun.

What did you make of the season’s villainous twist? Sound off in the comments section and keep following our Jessica Jones coverage for more about season two.