Jessica Walter, the sassy actress who excelled at portraying unhinged types, from the obsessed fan of a radio deejay in Clint Eastwood’s Play Misty for Me to nutty matriarchs on Arrested Development and Archer, has died. She was 80.

“It is with a heavy heart that I confirm the passing of my beloved mom, Jessica,” she said. “A working actor for over six decades, her greatest pleasure was bringing joy to others through her storytelling both on screen and off. While her legacy will live on through her body of work, she will also be remembered by many for her wit, class and overall joie de vivre.”

Early in her career, the New Yorker stood out in a pair of 1966 features as Libby MacAusland, an ambitious, acerbic wit who finds professional success but has trouble expressing her sexuality in Sidney Lumet’s The Group (1966), and as Pat Stoddard, a woman who has romantic entanglements in the Formula One-set Grand Prix, directed by John Frankenheimer.

She won an Emmy in 1975 for portraying San Francisco’s first female chief of detectives in the limited series Amy Prentiss (the character was introduced on Ironside) and was nominated three others times, the last in 2005 for her delicious turn as the manipulative Lucille Bluth on Arrested Development. (She started on the series in 2003.)

Always drinking, always exuding an air of entitlement, the sarcastic Lucille was at the center of an ever-evolving mess of a once-wealthy, now desperate family on the Fox/Netflix sitcom. Her razor-sharp work was a huge reason for the show’s cult appeal, and her lines became catchphrases and her mannerisms memes.

“People have been great, especially in New York, where you are walking around a lot,” Walter noted in an interview with Vanity Fair in 2013. “The one line I get a lot is, ‘I’d like to cry but I can’t spare the moisture.’

“And winks! Actually, I can do that wink, and it is very difficult, with one eye totally closed and one eye totally open. It said in the script that Lucille winks, and since I can do that in real life, I just thought it would be good to do a specific wink for the character. And they liked it so much that they started writing in more winks. I can’t believe my wink has gone viral!”

Her performance helped Walter land her gig as Malory Archer on FX/FXX’s Archer starting in 2009. As the former CEO of the International Secret Intelligence Service, the agency where her son, Archer (H. Jon Benjamin), works, she was ruthless, domineering and critical — and rarely seen without a cocktail.

Archer creator Adam Reed told her that she was the first one cast on the animated show, and the fact that Malory and Lucille were similar in nature was not coincidental.

As she told The Daily Beast in 2017: “They sent out copy for auditions to people that said, ‘Think of the type as Jessica Walter from Arrested Development.’ And my agent who got the copy called me and said, ‘They’re thinking about you. If you like it, I’ll tell them you’re interested in doing it.’ I said, ‘That sounds smart.’ And that’s exactly how it happened.”

Born in Brooklyn on Jan. 31, 1941, Walter was raised in Astoria, Queens. Her father, David, was a world-class violinist who performed with Arturo Toscanini and Pablo Casals, and her mother, Esther, was an immigrant from Russia. Her brother, Richard, would go on to write screenplays and teach the craft to Dustin Lance Black, Alexander Payne and Andrew Bergman, among others, as a longtime UCLA professor.

Walter studied acting at Manhattan’s High School of Performing Arts and the Neighborhood Playhouse, where she was guided by Sydney Pollack and her classmates included James Caan and Brenda Vacarro, who years later would introduce her to Leibman.

In 1960, she made it to Broadway as the secretary Liz in the original production of Advise and Consent, starring Ed Begley and Richard Kiley, and appeared on the CBS medical drama Diagnosis: Unknown.

She popped up frequently on the small screen back then, guest-starring on Naked City, Route 66, The Alfred Hitchcock Hour, Ben Casey and the pilot for Flipper, working for a couple years on the daytime soap Love of Life and co-starring with William Shatner on For the People.

Walter was honored with the Clarence Derwent Award in 1963 as most promising female performer for her work on Broadway in Peter Ustinov’s Photo Finish, and she would return to the New York stage for productions including 1964’s A Severed Head, 1988’s Rumors and 2011’s Anything Goes.

In 1964, Walter made her movie debut alongside Warren Beatty and Jean Seberg in Robert Rossen’s psychiatric hospital-set drama Lilith. It was Gene Hackman’s first movie, too, and she played his wife.

The Group, based on Mary McCarthy’s best-selling novel and also starring Candice Bergen, Joan Hackett, Elizabeth Hartman and Shirley Knight, followed a circle of women who graduated from an all-girl college during the 1930s and stayed friends as their lives evolved over the next seven years. Walter’s Libby becomes bitter as the movie goes on.

She received a Golden Globe newcomer nomination for Grand Prix for playing the unhappy wife of a race car driver (Brian Bedford) who has a fling with another (James Garner). Two years later, Lumet hired her again for Bye Bye Braverman (1968), where she played the widow of a man mourned by pals played by George Segal, Jack Warden, Sorrell Booke and Joseph Wiseman. 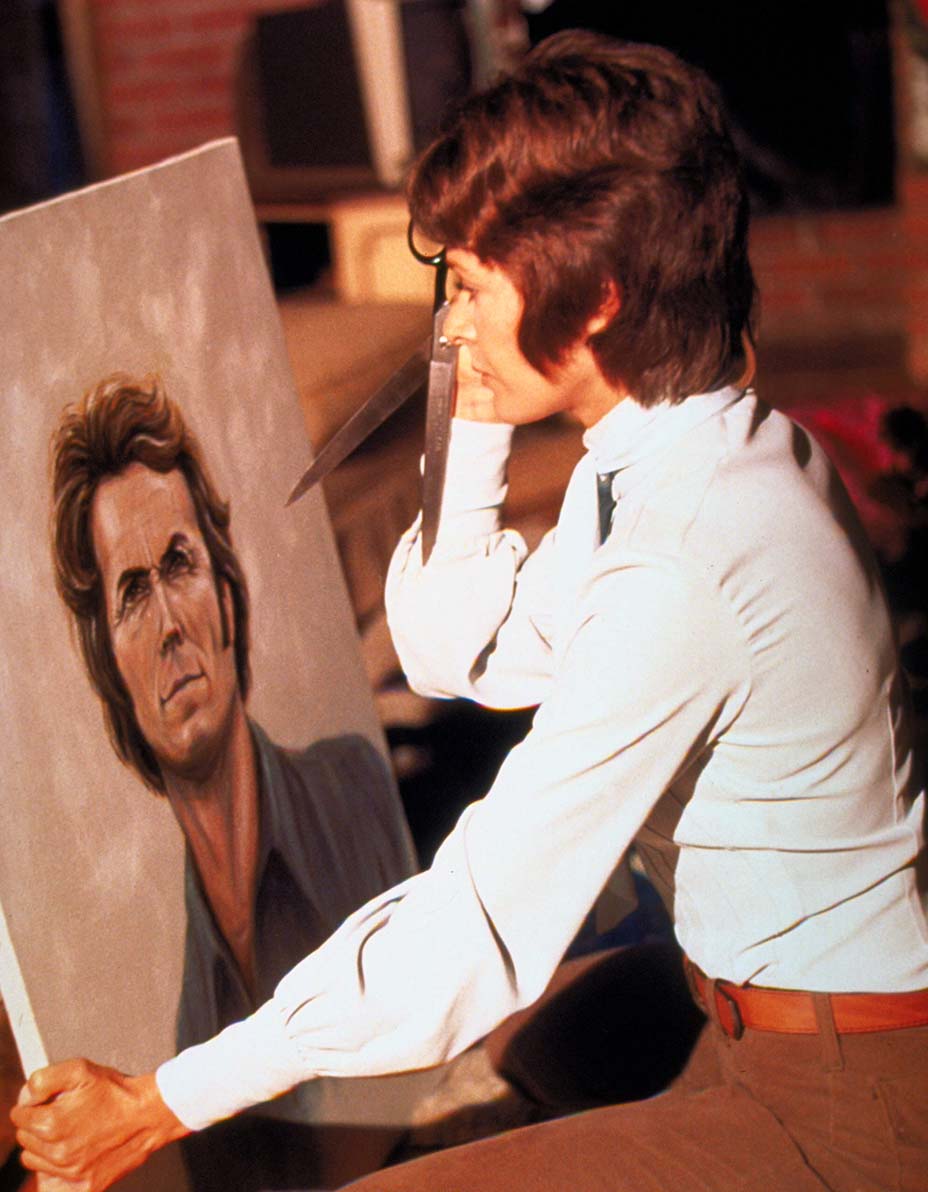 For her chilling portrayal of Evelyn Draper in Play Misty for Me (1971), Walter landed a second Globe nom.

“You can’t take your eyes off Walter” in the movie, Nojan Aminosharei wrote in a February 2019 profile of the actress in Elle. “One minute, she oozes genuine, 100 percent natural sweetness. The next minute, she snaps. But it’s the way she snaps. That’s when her star power comes into sharp relief. It’s at once jarring but uncomfortably familiar to anyone who’s ever felt so much as a pang of unrequited love. In one scene, she gives Eastwood’s character a surprise gift, a new pair of shoes. Her dejection at his lack of gratitude is heartbreaking. You’d almost empathize if she didn’t follow it up with attempted murder.”

“The movie revolves around a character played with an unnerving effectiveness by Jessica Walter,” Roger Ebert wrote in his review. “She is something like flypaper; the more you struggle against her personality, the more tightly you’re held.”

In a 2012 chat with The A.V. Club, Walter reflected on why she found playing unbalanced characters so appealing.

“They’re juicy, much better than playing the vanilla ingenues, you know — Miss Vanilla Ice Cream,” she said. “I don’t know that I’m attracted to them. I think people just think of me for them, and I read them and I like them. … They’re much more fun to play and find the levels, because nobody’s that one-color evil. There’s lots of levels to why they became that way.”

She had regular roles on Bare Essence, Three’s a Crowd, Aaron’s Way, Dinosaurs, Coach, 90210, Retired at 35 (opposite Segal) and Jennifer Falls and guest stints on The F.B.I.; Love, American Style; Mannix; Medical Center; The Love Boat; and Murder, She Wrote.

Walter also received Emmy noms in 1977 for a turn as a money launderer hunted by the mob on The Streets of San Francisco and in 1980 for portraying Pernell Roberts’ wife on Trapper John, M.D.

She worked with Leibman in a 1986 Los Angeles Theatre Center production of Molière’s Tartuffe, on Broadway in Rumors, on a 1996 episode of Law & Order, in the film Dummy (2002) and finally on Archer when he came aboard in the fourth season as Ron Cadillac, Malory’s new husband with a shady past.

Walter also was married from 1966-78 to Ross Bowman, a theatrical manager on Advise and Consent. Survivors include a grandson, Micah.

In lieu of flowers, the family asks that donations be made to Guiding Eyes for the Blind.