In Italy, only one man can lay claim to the title of Late Night King: Alessandro Cattelan. With his show, E poi c’e Cattelan (And Then There’s Cattelan), known by locals as EPCC, the host and comedian has enjoyed incredible success.

As the only Italian show that mimics the format of American late night, EPCC — airing Thursday nights on Sky One — earns some of the highest ratings in the country. And, like its U.S. counterparts, it has attracted a new generation of young fans who help make the comedic sketches and intimate interviews go viral in Italy every week.

Cattelan, who also serves as host of X Factor Italy, often welcomes guests who don’t have anything to promote but want to take part in a particular gag. In addition to top local celebrities, international guests on EPCC have included Robbie Williams, Rupert Everett, Jean Paul Gaultier and Emily Ratajkowski.

The bit opens with Cattelan in Milan announcing his new sketch idea “Thank You Notes,” one of Fallon’s popular segments where he writes out letters of gratitude to everything from sliced bread to relish. When Cattelan learns his idea is not original, he’s determined to go find Fallon to make things right. 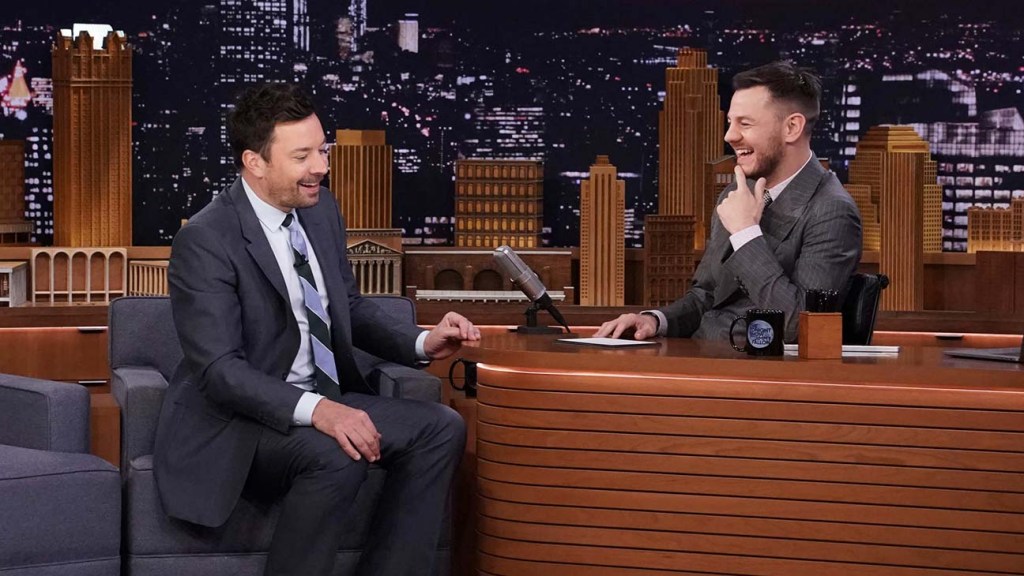 “I know you,” says Fallon greeting the comic. “You’re the Italian me.”

“Yeah, kind of, or you’re the American me,” responds Cattelan.

Cattelan confesses that he stole the “Thank You Notes” segment, with Fallon replying, “How do you say in Italian ‘I’m going to sue you’?”

Fallon graciously switches seats with Cattelan for an interview. Cattelan introduces one of his own bits, a TripAdvisor parody where guests can leave “anonymous” reviews on well-known acquaintances. The audience is not privy to the names so that guests can be “brutally honest” in their reviews.

For Fallon, Cattelan creates the “HostAdvisor” game, going through a series of cards of popular American TV hosts.

Fallon doesn’t hold back, describing one as “He keeps me on my toes, especially now. We promised to get matching tattoos of each other’s faces. I got one of him, but he didn’t get one of me.”

He describes another host as “Deadest inside. Just soulless.” Cattelan seems shocked before admitting, “Yeah, you can tell.”

“They are a birthday party come to life,” he says of another host. And he describes another as “very talented; his accent is fake.”

In the only host they revealed on camera, Fallon says in his Oprah-voice, “She is awesome,” before admitting he’s referring to Ellen DeGeneres.

“I’m honored to be sitting in his dented chair,” he admits of the host that came before him.

And of another he says: “I sign autographs for his name all the time. People think I’m him.” Fallon describes an incident six months ago in which he met a girl on the street, spoke to her for 20 minutes and took multiple selfies with her, all to have her call him by the wrong name upon leaving.

Fallon also tells Cattelan that he’s continuously amazed with his job, especially what goes on backstage. He talks about one moment when he had Kim Kardashian, Mike Tyson, Sarah Jessica Parker, Tina Fey and others lined up for a bit backstage. “It almost looked like a wax museum,” he jokes.

EPCC premieres tonight on Sky Uno and can also be viewed on Sky Go, Sky On Demand and Now TV.

Sky Italia Renews 'The X Factor' and 'Italia's Got Talent'