John Oliver said on Sunday night’s Last Week Tonight that it isn’t email or the Internet that has hurt the U.S. Postal Service’s bottom line.

In fact, he said, it’s a law called the Postal Accountability and Enhancement Act of 2006 that was passed by Congress in 2006. The law requires the USPS to prepay health care benefits for retirees on a 50-year schedule, starting with an “aggressive obligation” of setting aside over $5 billion a year for 10 years. The law also put price caps on first-class mail, limiting the Postal Service’s ability to bring in more money.

After it was passed, the USPS went from generating a yearly profit to losing money every year; it reported a net income of $900 million in 2006 and reported a loss of $3.8 billion in 2009.

Oliver cited data estimating that 74 percent of the USPS’ net losses have occurred since the law passed.

“At the worst possible time, this American institution is on the brink of collapse,” Oliver said.

Oliver also noted that companies like UPS and Federal Express contract the USPS to deliver packages in rural areas, and added that Amazon also contracts the Postal Service to deliver its packages — which, he opined, may have something to do with why President Trump has been critical of the USPS and unwilling to offer financial support.

“Trump is strongly opposed to giving the USPS sufficient aid, and many believe it’s because of its relationship with Amazon, which is owned by Jeff Bezos, who also owns the Washington Post, whose political coverage is hated by the president, who, as we know, makes policy decisions based on his never-ending game of ‘Six Degrees of How Is This About Me?'” Oliver said.

Oliver noted that the USPS is a “self-funded entity that operates independently and pays for itself” with money made via purchases of postage and other services.

“The purchase of stamps is still a key revenue generator for them,” he said.

To that end, in order to try to help boost its bottom line, he announced that the show’s staff had been working with Stamps.com for many weeks to launch a line of Last Week Tonight-branded stamps. The stamps, which are available here, feature characters who have appeared on the HBO show along with one that reads “And Now … a Stamp,” a twist on the name of one of his weekly segments.

“The assortment includes images of a free-spirited otter mascot named Chiijohn, a giant squirrel named Mr. Nutterbutter, a zebra mascot who directs traffic in Bolivia and a stamp that says ‘AND NOW … A STAMP’ to remind you that the stamp is — and this is true — a stamp,” reads the listing on Stamps.com. 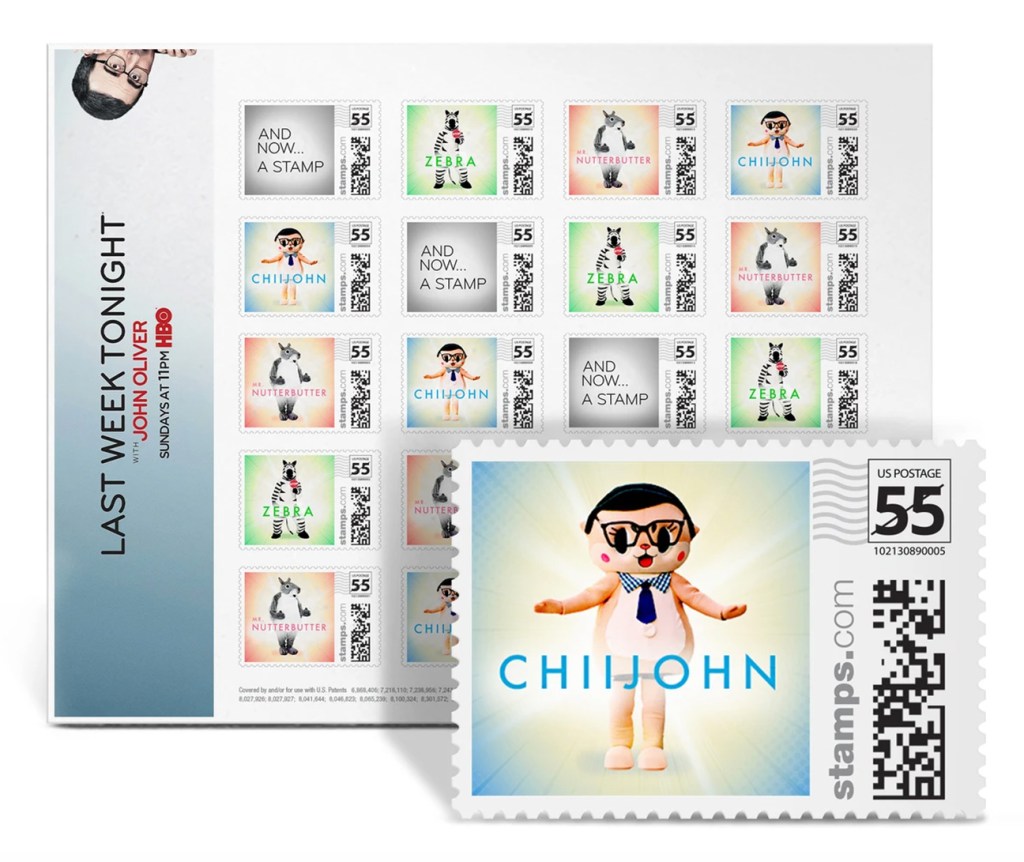