In the teaser for Disenchantment, the latest animated project from Matt Groening, a voiceover puts it simply. “You’ve seen the future in Futurama. You’ve seen the present in Springfield. So, what’s the obvious third move? The past, of course!”

The choice was that obvious, according to co-developer and executive producer Josh Weinstein. “In The Simpsons, we get to make fun of our world in the present day,” he said. “In Futurama, we did the same by going to the future. So the past, it’s the most obvious choice and such a fruitful world, [as well] as a world of fantasy and fantasy storytelling.”

That world is Dreamland, a medieval kingdom full of beasts and battles. Within it exists a young trio who are looking to find their own place in both the feudal system and the world at large. They include rebellious Princess Bean (Abbi Jacobson of Broad City), elf companion Elfo (Nat Faxon), and “personal demon” Luci (Eric Andre). Disenchantment dropped its 10-episode first season on Netflix on Friday (Aug. 17).

In anticipation of the show’s premiere, Weinstein (whose credits include co-showrunning The Simpsons and work on Mission Hill, Futurama and Gravity Falls) talks with The Hollywood Reporter about the shift to serialized storytelling, how the show tells a coming-of-age story in the Dark Ages, and what he feels connects thematically through 25 years of work.

What made you go back to the past?

There’s a few [reasons]. Matt’s had this idea for years and years. He has these notebooks that are filled with drawings and various ideas. We’ve been developing it for the last three years. I think it’s such a fertile world. Matt really likes fantasy and I really love medieval history, so it’s a good combination.

What inspired the transition to more serialized storytelling in this show, as opposed to your other shows, which focus more on resetting things back to the status quo at the end of each episode?

I think Gravity Falls was a pioneer of animated shows in that it started to tell this serialized story. [Creator] Alex Hirsch and Disney were very brave to do that. Every episode stood on its own, but it still told this grand story. That inspired me a lot. Alex Hirsch grew up watching The Simpsons, so he learned a lot from us. But we learned from him. I feel like we’re taking this a step further in telling a serialized epic tale that not only goes over one season, but over multiple seasons. We know how this series will end.

I think it’s also out of impatience and wanting something new in our writing lives. It gets boring and frustrating to have to tell stories that have to reset every time. In a world of fantasy, people already know about ongoing storytelling, so in a certain way, it’s very freeing to us. We can plan. We’ve planned these deep, running arcs for all our main characters; we love that. Even though each episode has its own self-contained story and some episodes are more canonical, overall, it [contributes to] this big arc. 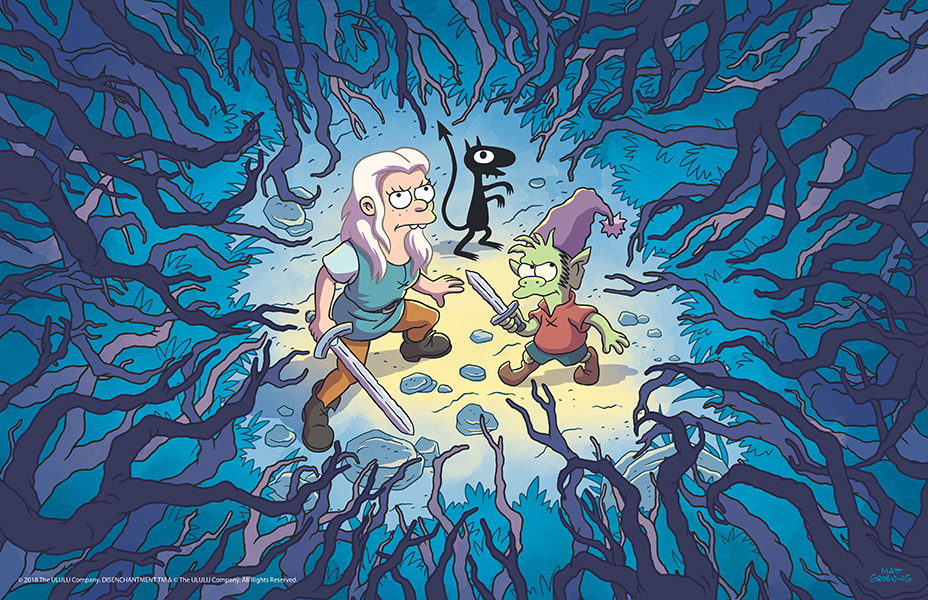 How much does the Netflix model help contribute to that? With the season being released all at once as opposed to weekly, one could theoretically watch it in one fell swoop.

Yes! It’s a magic fit. These 10 episodes are like a five-hour epic movie. There’s a good chance people are going to watch it very quickly, because you are really propelled along. It’s intentional, and it’s a really great fit. I also know, as a viewer, I get really frustrated when I’m watching an ongoing story and I want to see the next one. Hopefully, people will be very satisfied.

I want to go back to what you mentioned before about commentary. I feel like all of your shows were making statements about humanity and the world we currently live in. With Disenchantment, are you making commentary more about medieval life, or still about the present day, but filtered through that specific lens?

This show is a coming-of-age story with a backdrop of all this fantasy. So as much as it’s like Futurama or Lord of the Rings, it’s also like American Graffiti. It centers around this trio. It’s a story of these three characters facing the world for the first time as an adult. All the adults and legends that come before tell you what you should do and how you should behave, but our characters are like, “No, that’s B.S. and we’re going to find our own way.” That’s the underlying theme. You may not know what you’re going to do in life, but with your friends, you’ll find your way and yourself. We put a lot of our experiences of being that age and going into the world and not knowing what we want to do into this show. So in that way, it reflects the current world. We stick to what the story is, but there are always opportunities to make fun of the current world by going into the past.

With Futurama, you were able to write characters and storylines that were non-humans. You get a similar situation here with characters like Elfo and Luci, as well as other creatures.

We’re used to and we love writing for non-human characters. We write them with — we hope — great humanity, but it’s fun to have that always-expanding world of different types of creatures. We want to handle everything realistically. There have been so many fantasies in movies and books. If we were just a parody of those fantasies, it wouldn’t be worth doing [Disenchantment]. That’s why we wanted to do our own story.

Let’s talk about that story. You have brought in actors you’ve worked with, like Billy West, John DiMaggio and Tress MacNeille. But in having your lead trio being played by Abbi Jacobson, Nat Faxon and Eric Andre, I feel like you’re ushering in a “new guard” and acknowledging a contemporary style of comedy.

It’s an interesting thing we did with our writing staff as well. Half the staff are these old Simpsons/Futurama farts; we’re all around 50 or over. I wanted the other half of the staff to be 30 or under. Otherwise, you’re doing the same old thing. I hired a couple of writers who I loved from Gravity Falls and [others] who I’ve never met, but I love their writing. We have a really good mix of old and young on the staff as well. The younger generation of comedy writers, including people like Eric Andre, had their baseline be shows like The Simpsons and South Park. I grew up on shows like Scooby-Doo that are not the world’s best shows. [My theory is that] they grew up on great comedy, so they’ve evolved past us. I think they’re funnier than I am, so it’s a nice combo.

You have not only a mix of ages, but geographically as well. There seems to be a lot of British actors used; what inspired you to bring them aboard?

I made a kids’ show (Strange Hill High) for the BBC in England, and I love British comedians. Through a twisted path, I had also done a pilot for Fox with Matt Berry and Rich Fulcher that never went ahead. But we really liked working together. The Mighty Boosh is my favorite show of all time. [Because they] were on it, that’s how we got Noel Fielding. [Then] Rich said, “Oh, you’ve got to use my friend Lucy Montgomery, who’s amazing.” She’s like the British Tress, who can do all sorts of different voices. So that comes from our love of British comedy more than wanting to have British voices. 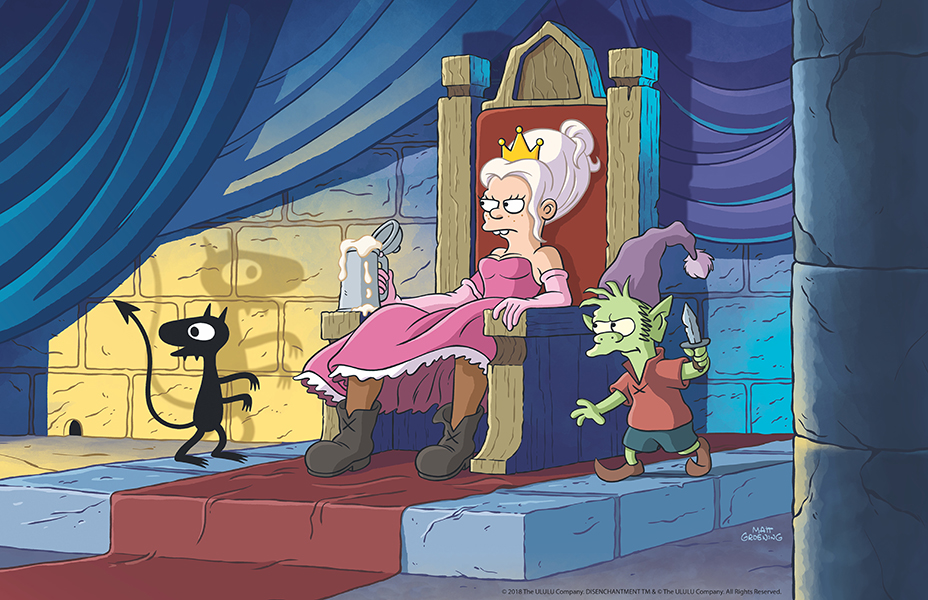 Did the series’ release on Netflix encourage you to make Disenchantment a more profane or gory show than previous projects?

Netflix gives us amazing creative freedom and encouragement. They’re, like, no other network or company I’ve worked for in being so open. But we set our own rules. Early on, we discussed that. While we deal with adult topics, we [asked], “Are our characters going to say bad words?” [And we said], “No. It doesn’t feel right in the Matt Groening world to do that.” We limit ourselves. And like Futurama or The Simpsons, there are adult jokes and they’re done in such a way that it will go over kids’ heads.

Shows like The Simpsons and Futurama have been pop culture mainstays for years at this point. With Disenchantment, do you feel like there’s any thematic connective tissue between the three?

What we learned about writing characters on The Simpsons has carried through. Matt, Jim Brooks and Sam Simon always had this rule that whatever crazy situation characters [were] in, they must respond with real emotions. That’s carried through Futurama and very much in this show. There’s an essential humanity that I hope we carried on, too. Even if it’s crazy, there’s a certain sweetness that I really like.