Continue to The Hollywood Reporter SKIP AD
You will be redirected back to your article in seconds
Skip to main content
August 15, 2019 6:15am

When it was announced in September that I would be joining the writing staff of Hulu’s rebooted Veronica Mars series, some people took it as a sign that the zombie apocalypse was imminent. The first sign was Ed Sheeran appearing in Game of Thrones. What was next? Meat Loaf showrunning Black-ish? Mike Tyson as dialogue coach for the Downton Abbey movie? Others expressed excitement that I would bring a diverse perspective to the show. I did campaign hard for more characters over 7 feet tall, but their systemic prejudice kept most actors between 5-foot-1 (Kristen Bell) and 6 feet (Ken Marino).

For those still scratching your heads at how I ended up in the writers room, the journey started a couple of years ago. I was writing an article for the Los Angeles Times about some of my favorite young-adult novels. My writing partner, Raymond Obstfeld, suggested I read Slave Day by Rob Thomas, about how a high school tradition of auctioning students and teachers for a day of humiliating servitude to raise money for the school affected several students, including two black characters. The writing was sharply intelligent, the themes subtly literary. I was especially impressed by how well he captured the conflicted mind-sets of the black characters. Rob read my article and, when his publisher announced it was reissuing Slave Day, he asked me to write an introduction, which I happily did.

I then asked Rob if he’d look at a pilot for a noirish series that Raymond and I were working on about a black troubleshooter for L.A.’s Dunbar Hotel, once the most elegant and prominent black hotel in America. Set in 1944, the script features gangsters, spies, civil rights and jazz. Because most of the characters are black, and its historical setting, we knew it would be a hard sell. But Rob enthusiastically embraced the story and took it to Warner Bros., which bought the series. A couple of weeks later, Rob asked if we’d join his writing staff for the rebooted Veronica Mars.

To give you some context, neither Raymond nor I were looking for more work. We have a full schedule of projects, so if we had been offered to write on a series we weren’t passionate about, we would have said no. But the original Veronica Mars is one of my favorites. It expanded the boundaries of both the mystery genre and the high school drama genre by combining them in such a clever, witty and intelligent way that the whole exceeded the sum of its parts. Raymond was a superfan: He teaches the Veronica Mars pilot in his English lit courses at Orange Coast College. No way we weren’t doing this. Our only fear: screwing up a series we loved.

Still, being a fan doesn’t qualify you to be a writer on a successful show. But Raymond and I didn’t wander out of the jungle one day muttering, “Me want write.” Raymond had published about 40 books under five pseudonyms on his own before we teamed up together a dozen or so years ago. I wrote three mystery novels about Mycroft Holmes with Anna Waterhouse an a Mycroft Holmes graphic novel with Raymond. Together, Raymond and I have written a bunch of best-selling books from young-adult novels to history books for which we received three NAACP Image Award nominations, including one win. We weren’t just lucky Hollywood lottery winners.

Despite that, being in the writing room proved a challenge. I knew the other writers would treat me with courtesy because of my basketball career. But would they respect me as a writer, which was more important to me? Plus, I was used to being the leader on any team I was on. Raymond, a college professor for 40 years, was also used to being a room leader. Now we were the least experienced TV writers in the room. 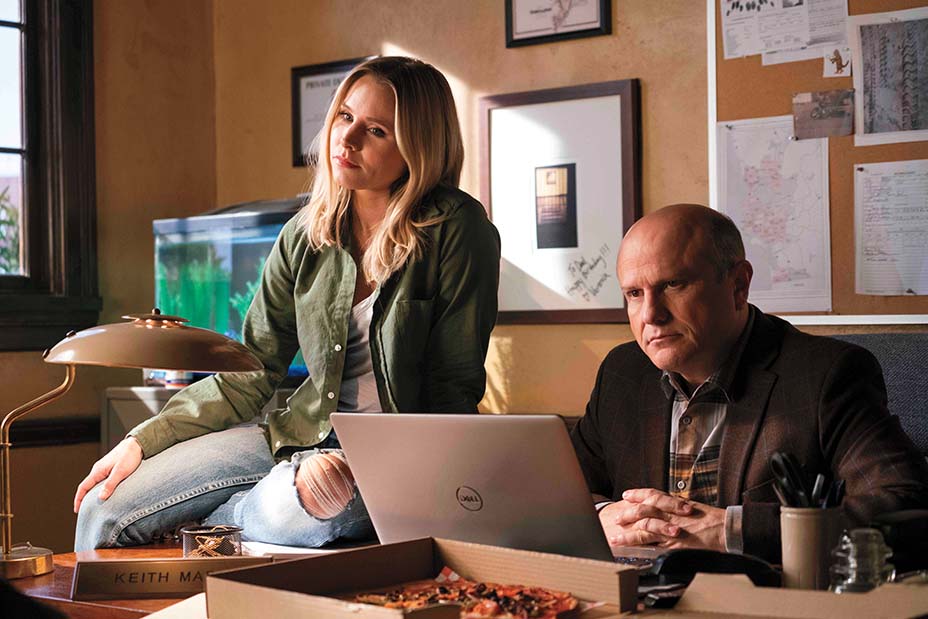 Whatever trepidations the other writers had — all of which would have been justified — they never expressed anything but warm inclusion and unqualified support. There were four other writers: the show’s creator, Rob Thomas; Diane Ruggiero; Heather V. Regnier; and David Walpert. David has that buttoned-down but Cool Dad vibe and I don’t think a day went by when he didn’t crack a dozen asides that made me burst out laughing, something I rarely do. Heather comes across like the brainiest girl in English class but too humble to realize it. She made studied, incisive suggestions that always left me jealously wondering, “Why didn’t I think of that?” Diane has been with Veronica Mars since the first season and was co-writer of the movie (as well as the co-creator of iZombie). Compared to Heather and David’s casual but composed presence, she was a dervish of kinetic energy. Even just sitting she seemed to hum with suppressed electricity. She fired out plot pitches like a Gatling gun. When one got rejected, she had three more, each one better than the last. Like the other writers, she was as funny as any comedian with a Netflix special.

Finally, there was Rob, our Glorious Leader. I’ve had the pressure of playing for NBA championships in front of millions of people, but that paled when watching the pressure he faced every day of the five months I was there. While we planned out the plot and character arcs of the eight episodes of Veronica Mars, he and Diane were also overseeing the final season of iZombie. He was making decisions about budget, casting, editing, music and a thousand other things. While we ate lunch, he was editing scenes from iZombie or on the phone trying to get J.K. Simmons. Yet he came in each day with good cheer, a clear vision and a great sense of humor. All while on a juice diet!

This was our team, and if there’s one thing I’m an expert on, it’s teamwork. I quickly learned that our role was to help Rob realize his vision. As Veronica’s creator, he knew her character, her voice and her world best. Whenever I doubted his vision, he reminded us all with his exceptional memory of all things Veronica. We would be discussing a scene in episode five, and he would shake his head and say something like, “We can’t do that because in episode two, act four, scene five, Keith eats an eclair.” We’d all look blank, trying to remember that moment. Right, I’d think, that’s why he’s the team leader.

We made protocol mistakes at first. Sometimes Raymond and I would pitch an idea that Rob would reject. Room etiquette demands that once Rob rejected the idea, it was done. But in our first days, we would sometimes revisit our idea because it was just that awesome. Rob would politely correct us, and we soon realized why these rules exist.

Despite our rocky adjustment period, Raymond and I did bring something to the show. Rob and the other writers didn’t need any sensitivity awareness in terms of race or other marginalized people from me. They were acutely sensitive to exploring the destructive forces of the Haves and Have Nots on society — as the show has been from the first season. But being the oldest writers in the room, we had some expertise. As a historian, I was able to give historical context to some of our discussions so we could delve deeper into certain issues. During a discussion of existentialism and determinism that Rob was ingeniously weaving into the story through one of the hitmen, Raymond, who also taught a course in philosophy, brought new insights into the philosophical analysis. Also, because we are both mystery writers and readers, we were able to suggest some of the plot twists that were used.

Though each writer is assigned specific episodes to write, we all had so much input into every episode that no one writer is really the author. That was the ultimate in teamwork. Watching the episode Raymond and I wrote (“Entering a World of Pain”), I could pick out ideas from every writer. It all had that same fast-break-no-look-pass feel of the Showtime Lakers working unconsciously together. I had never before experienced a period of such sustained creative intensity. It was dizzyingly wonderful.

And then it was over. We went our separate ways. Each working on new projects.

Writing for Veronica Mars reminded me of pelicans and geese who fly in a “V” formation when they migrate because it creates an updraft for the other birds. This allows them to save energy while flying, which means they need less food and therefore can get to their destination faster. Jet squadrons fly the same pattern for that reason. For five months, we were literary pelicans, lifting each other up, carrying each other forward, and arriving at a place that was sunnier and warmer for our having traveled together.

A version of this story first appeared in the Aug. 14 issue of The Hollywood Reporter magazine. To receive the magazine, click here to subscribe