“It’s just been one foot in front of the other for, I guess, 20 to 30 years,” Mrs. Fletcher star Kathryn Hahn says when asked the admittedly ridiculous question of why, exactly, it took so long for Hollywood to cast the all-purpose actress in a television series of her very own.

Hahn has been a utility player in the industry for decades now, seamlessly switching between comedy and drama, playing both the meek BFF and brash spotlight-stealer. So while it’s a setup question for sure, it’s also a legitimate one. If the universal reaction to learning Hahn is in the project someone’s about to watch is “Oh, I love her,” it seems like a pretty valid question, too.

“I felt very much an empathy and a kindredness to a woman that had tried to live her life by the rules, tried to live her life within a prescribed set of lines,” Hahn says. “Her whole life she tried to be the good girl, just tried to do everything right, and at a certain point woke up and thought, ‘Well, what has this gotten me, really, by not straying from whatever the prescribed lines had told me? What has that actually gotten me in the end?’ And there was something really moving about it, and especially at that stage in the game for her to suddenly take these very brave leaps into self-discovery.” 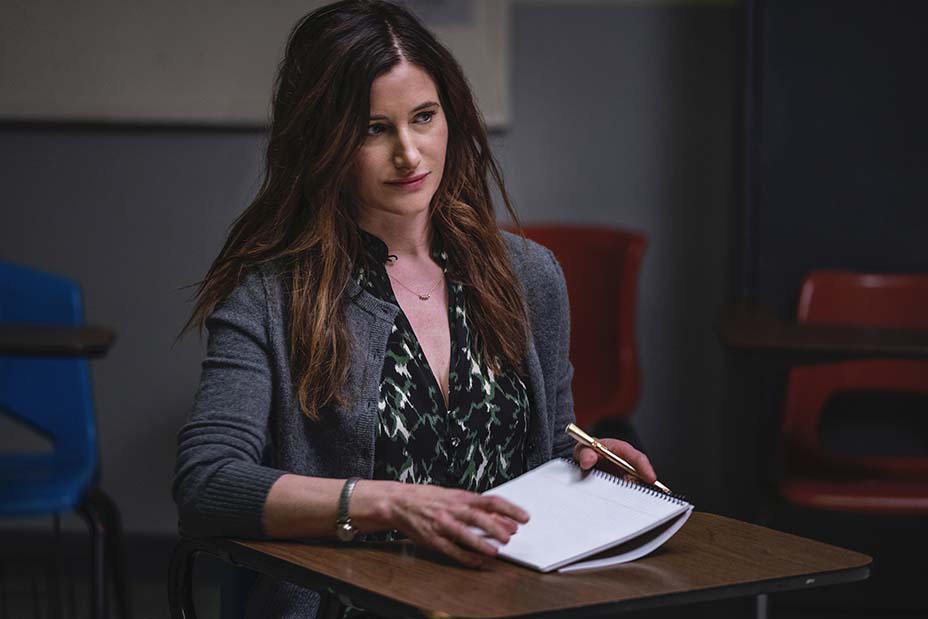 Hahn bares all — literally — in the role, but also delves deeper into a more emotional, introspective side that she’s only really been able to tap into onscreen in recent years. The actress points to the film she did with Transparent creator Jill Soloway in 2013, Afternoon Delight, as a “turning point” in the way she was able to choose roles.

“Before that I had been blessed to be working, but jumping from supporting to supporting to supporting to mother and all of it, but also never feeling completely able to dive in. I was always like a guest,” Hahn says. “I felt like a guest in somebody else’s home, and I was always just trying to be very polite and do what was asked. Always having a ball, but it was never the full monty — not to say full monty in a nude sense, but I was able to finally, in Jill’s world, to do something that asked for more of me as a human. I felt for the first time like I was able to do something like I had been doing back in graduate school or theater school. It just felt — it was just heaven.”

She continues, “I think that that opened up a confidence in me that I had not been feeling in this aspect of my life, in the film world, that I’d had in theater. That collaboration went from Afternoon Delight to Transparent to I Love Dick, and that’s been one of the greatest stories of my creative life, for sure.” 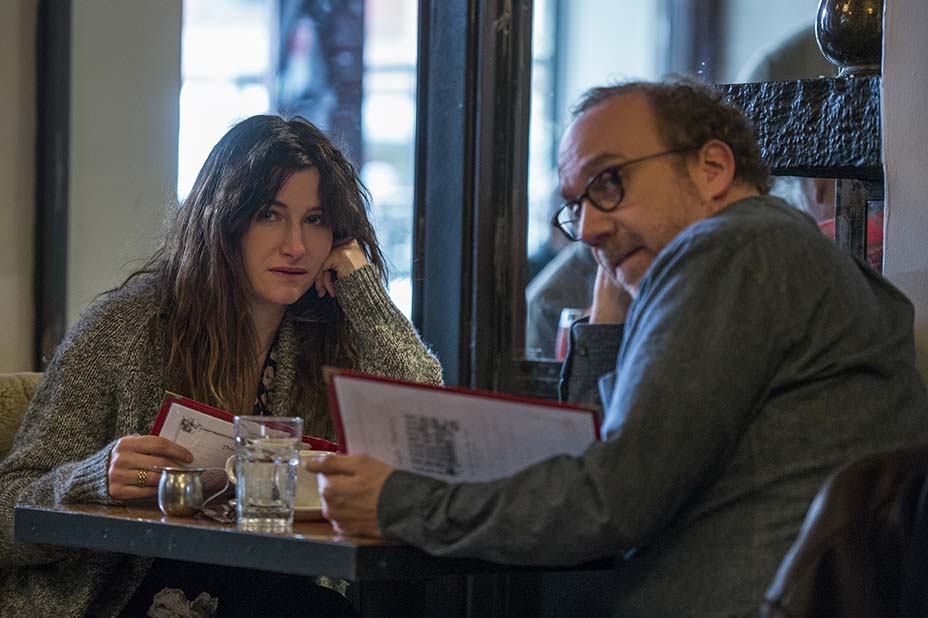 That experience of working with Soloway on all three projects was followed by Tamara Jenkins’ 2018 Netflix drama Private Life, another vehicle that offered a Mrs. Fletcher-esque awakening about what Hahn’s career could look like.

“That was another enormous high point, to be able to work with Tamara Jenkins, who I just also worship. That movie was one of the most special experiences of my life. I’ve had so many in the last 10 years,” says the actress. “The writing was so gorgeous and the experience of making it and the subject matter, just everything about it. Tamara is amazing, and the fact that she took a leap on me like this was also [major].”

The creators that have tapped deepest into Hahn’s potential in the past decade are not men, which is something the actress is very aware of.

“It isn’t lost on me that it has been mostly women that have been able to see something deeper, just to see me for these roles. And then Tom,” she says of her Mrs. Fletcher showrunner. “I do remember, I guess 10 years ago, going in to try and get the female lead — which wasn’t really a lead, it was more of a wife — [in one of] those movies with the two male stars, these big comedies, and being asked by the producers if I could really try to sex it up, do something with my hair and maybe wear, you know, a more supportive bra. Maybe do it up a little bit, put on a little bit more makeup. And just feeling like, ‘Oh, my God, are you just asking me to sex it up to come in for this wife part with these guys?’ And still not getting it. And then feeling like, ‘Well, clearly that’s not ever going to be me. That’s not the world that I’m supposed to be in.’ It just took a second. And I think for these amazing women creators, too, it’s not lost on me. Just follow the light.”

When Hahn moved to Los Angeles after graduate school, she immediately booked a supporting role as a grief counselor on Tim Kring’s NBC procedural Crossing Jordan, which ran for six seasons.

“When my then-boyfriend, now-husband and I moved to L.A. to do that show, they took such incredible care of us,” she said, remembering the base camp P.A. Derrick Beans who’d always call her “Lucky Number Seven” because of her position on the call sheet, and the well wishes the cast and crew sent when she and her husband were married. “It was just a really lovely group of people, and so many beautiful people that I think of as family.”

A year after Hahn’s debut on the series, she broke out as Kate Hudson’s BFF in the 2003 rom-com How to Lose a Guy in Ten Days.

“That was my first real movie movie, you know, where I got flown to Toronto and put up in the Sutton Place, or as we affectionately called it, the Slutton,” she recalled. “That was the greatest, and I just couldn’t believe that I was in a movie with Kate Hudson and Matthew McConaughey and Bebe Neuwirth. I mean, that was crazy, and it was also a really great experience, so the bar was very set really high, unfortunately.” 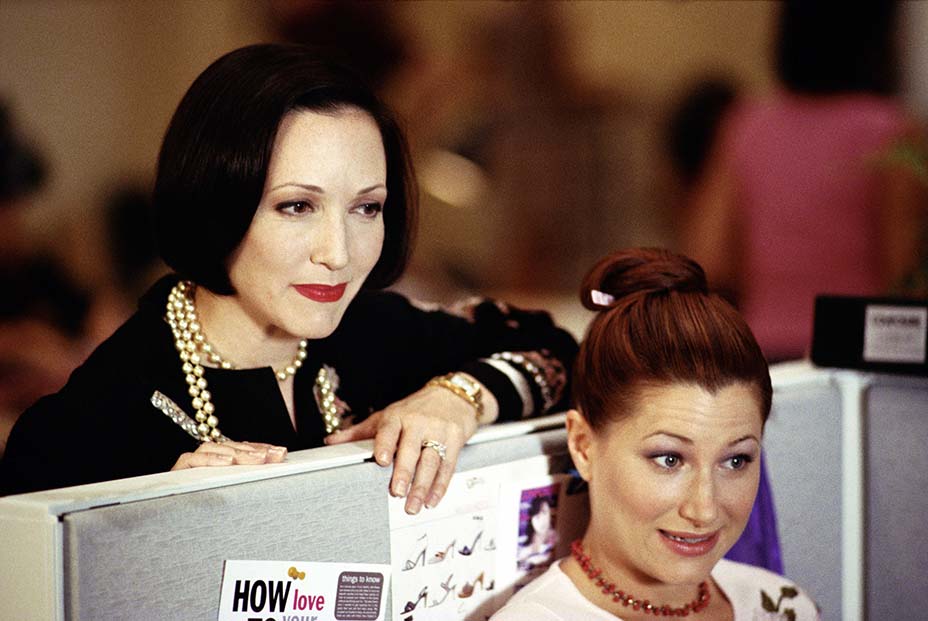 Hahn’s film career has included several more rom-com BFF roles, but also memorable and hilarious turns in blockbusters like Anchorman and Step Brothers and later in Bad Moms and its sequel.

“[Anchorman] was the first time I had been introduced to that kind of improv-heavy comedy world, and it just felt so anarchic,” she explains. “My husband had worshiped Adam McKay from back in Chicago, and all those guys. I knew very little about any of them, but when I first got to see them working, I was just in awe. It just felt like I was at a punk rock show, and I just loved it so much. Just to see them at work, and just to be like, one can do this? You don’t have to know your mark and say your lines? It was so thrilling. And that really cracked something open for me, that allowance. Then I did Step Brothers, and when that happened that was another — that was just the scariest and most thrilling and such a dream to work with John C. Reilly and Adam again and Adam Scott, who’s still a good friend. That was also such a cracking open — as an actor, too, not just comedy-wise.”

On the TV side, there have been plenty of memorable roles for the actress between Crossing Jordan and Mrs. Fletcher, including Transparent, Girls, Parks and Recreation, Happyish and the one-season comedy Free Agents. Television, for Hahn, has become a place where a more diverse group of actors and creators are able to go with interesting and smart content that maybe wouldn’t have been made a decade ago. 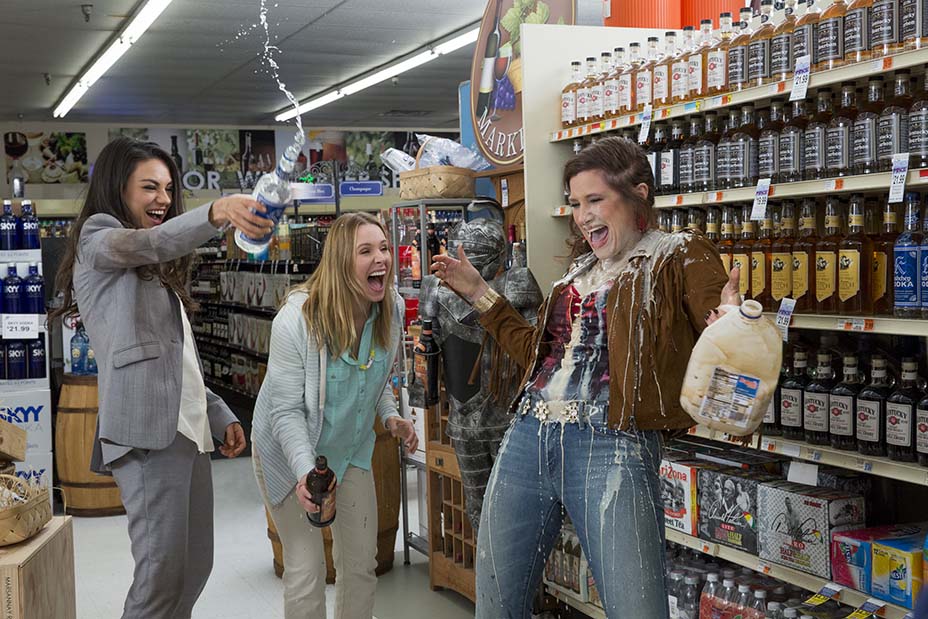 “The movies didn’t quite know what to do with a lot of people like me,” she says. “And I think it’s been kind of honed. There’s so much quality and so much good writing, and I think that there’s so many more homes for unbelievably authentic, individual voices in this new world of television or streaming. I mean, there’s so much more content that I’ve been able to find these amazing roles that I couldn’t have been afforded in I guess traditional television like 10 years ago, or even in movies. Nobody would’ve been able to financially have taken those chances. And I’m just forever grateful to places like HBO and Amazon and Netflix and all these places that have actually been able to take those chances, and find these creators, mostly women — and Tom — who have been able to take chances on someone like me, and be able to trust and have faith.”

Next year, Hahn will star alongside Elizabeth Olsen and Paul Bettany in the Disney+ Marvel series WandaVision, a project she did with her kids in mind.

But as Hahn plots her next move, she’s happy to let her career play out the way it has been naturally for the past few decades: “I love this one foot in front of the other to see what is revealing itself next. I have no idea! There’s so many things I would love to do. This has been an amazing chapter and I can’t wait until the next one. I get really antsy when I’m not working, and my kids are also getting a little bit older, so I want to be able to balance it out with a really normal [schedule]. It’s either I’m working, or I’m just the most boring human being on the planet at home. So it’s just trying to figure out that balance. But this has been a really fun and a really fulfilling chapter. So who knows?”