A day or two before she got the call for WandaVision, Kathryn Hahn had met with Marvel Studios president Kevin Feige and co-president Louis D’Esposito for a general meeting as both parties were interested in each other. Shortly thereafter, Feige, along with WandaVision head writer Jac Schaeffer and director Matt Shakman, were discussing the casting of Wanda [Elizabeth Olsen] and Vision’s [Paul Bettany] nosy neighbor, Agnes, and as soon as Hahn’s name came up, the decision was made. According to Feige, Hahn’s casting was highly unusual since his team rarely has time for water-bottle meetings. Now, as a newcomer to the Marvel Cinematic Universe, Hahn is quite pleased with her entrance into the franchise’s thirteenth year.

“Wanda Maximoff’s backstory in the comics is so dark and so traumatic. There’s so much there. And I knew that opening that up over a longer period of time than had been afforded in the films was going to be very exciting in this format,” Hahn tells The Hollywood Reporter. “So, to know that it was going to be something that the MCU has never done before — and that I was going to enter this world through a 1950s sitcom — all of those reasons together made it irresistible. I couldn’t have dreamt a cooler part, honestly. I was thrilled.”

Hahn is a rather versatile performer, something 2018’s Private Life can attest to, but she’s most known for her comedic talents in films such as Step Brothers, We’re the Millers and Bad Moms. While WandaVision walks a tonal tightrope between classic sitcoms and The Twilight Zone, Hahn appreciated the sincere comedy of decades past.

In a recent conversation with THR, Hahn also addresses her character’s season-long arc, her grandmother’s influence on her performance, and the excitement of shooting WandaVision’s premiere in front of a live studio audience.

WandaVision cannot be summed up with a typical logline or description. When you first got the call about the series after your general meeting with Kevin Feige, did you need multiple explanations until you were able to wrap your head around its ambitious premise?

Yes! (Laughs.) Like Kevin described, it was so fast. If it wasn’t the next day, it was like a couple days after the general. I went back and met with Jac Schaeffer, the writer, Matt Shakman, the amazing director, and Mary Livanos, our producer. They walked me through the story arc, and I stopped and asked a ton of questions as we were going through it because I’m a little bit of a newbie to this world. I was just blown away by the ambition and the swing that they were describing to me. I just kept being like, “If this can be pulled off, this would be so incredible.” My husband has also known Matt from the theater and worked with him in the past. So I knew he came from the theater, and that was really, really compelling to me. I was also very excited about the idea of working with Lizzie [Elizabeth Olsen]. I just think she’s so tremendous. I knew a little bit at the time — and I know more now — but Wanda Maximoff’s backstory in the comics is so dark and so traumatic. There’s so much there. And I knew that opening that up over a longer period of time than had been afforded in the films was going to be very exciting in this format. So, to know that it was going to be something that the MCU has never done before — and that I was going to enter this world through a 1950s sitcom — all of those reasons together made it irresistible. I couldn’t have dreamt a cooler part, honestly. I was thrilled. 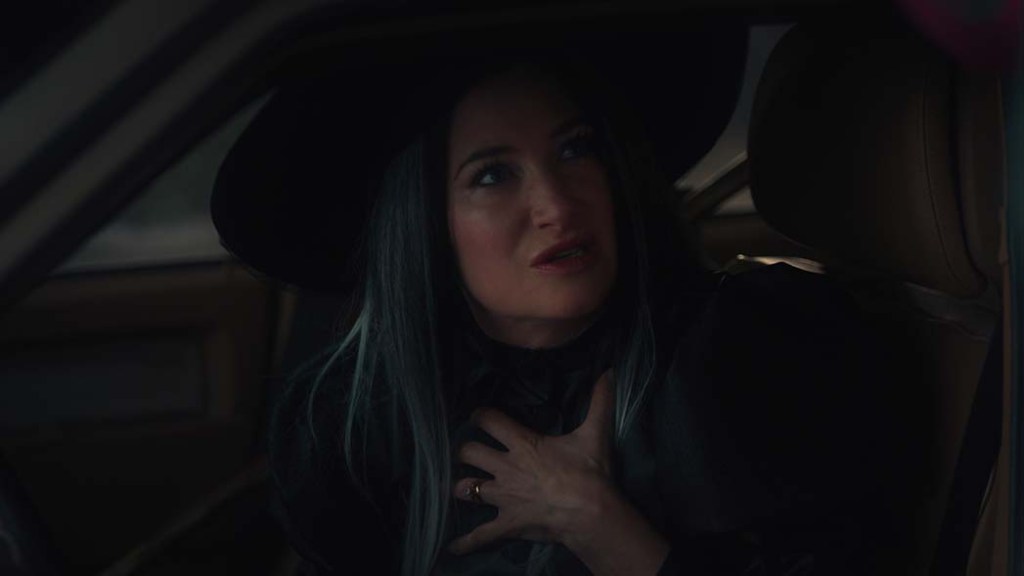 Some actors avoid reading ahead, so to speak, but since your character seems to be more aware of the bigger picture, was that another reason why Jac and Matt had to explain your character’s season-long arc? That way, you could plan your performance, accordingly.

Well, with some shows, the reality is that you have to take things episode by episode. So I did have the luxury of knowing where everybody was headed; I got to know the whole thing. As the decades hurdled by, the trick was to hold steady to something in the center, and that became really fun. Agnes’ role, especially in a classic sitcom sense, is that neighbor who’s always flopping over uninvited and offering advice. We know nothing about her own homelife, and she’s always complaining while at their house. There’s such a legacy of those characters from so many shows, and it was really fun to research that trope. 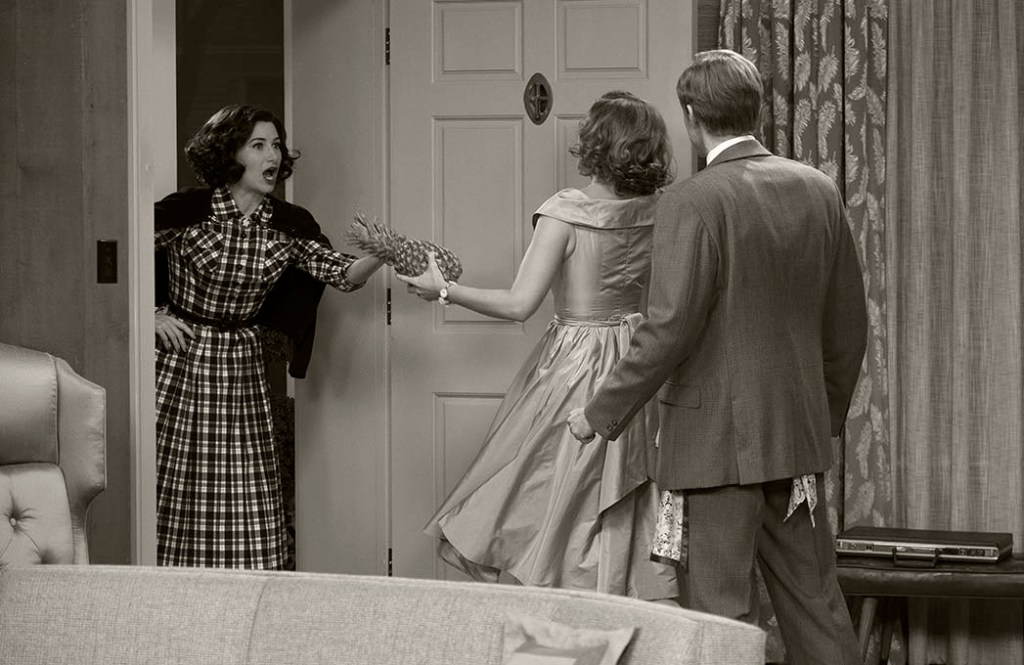 Did you experience any Milly Campbell/Revolutionary Road flashbacks during the ‘50s episode?

Nice! Oh my God, exactly! This is honestly the first time I’ve connected those two. Millie was also the name of the neighbor on The Dick Van Dyke Show, which was a little bit of a touchstone. But I love [Revolutionary Road]. I think about that soundtrack all the time.

Since there was a live studio audience for the first episode, did you often have to delay your responses so the audience’s reaction could die down a bit?

Yeah, you’ve gotta hold for a laugh, but what was exciting to us was that there were laughs. Jac’s writing walks such a great fine line, tone wise, and Matt’s direction is so taut. His patience, his integrity, his faith and his trust in an audience — I just think he’s incredible. The trick of that ‘50s episode in front of an audience — at least for me, comedy wise — is that it’s so easy to be such a cynic. It’s so easy to just want to make fun of something, or get on the outside of something and parody it or satirize it. Roles for women aside, and the social mores of the time aside, there was something about the comedy of being in that ‘50s sitcom that felt very earnest, and there’s something very refreshing about that.

I’ve heard that the live studio audience was mostly friends and family. Did your family happen to be in attendance?

No, no one. I wanted to keep it all a surprise. So I was very lonely. (Laughs.)

You really nailed the speech patterns of the ‘50s and ‘60s episodes. Did you model your speaking style after anyone in particular?

I think my Grandma, definitely. She always had that [speech pattern], so she’s in there. We had an amazing dialect coach named Courtney Young, who just gave us so much raw material to play with. So there were a lot of commercials and interviews. It was raw source material that wasn’t just performance, but it was also people talking. So I felt like I could blend the two to create this own bird. So that was really fun. 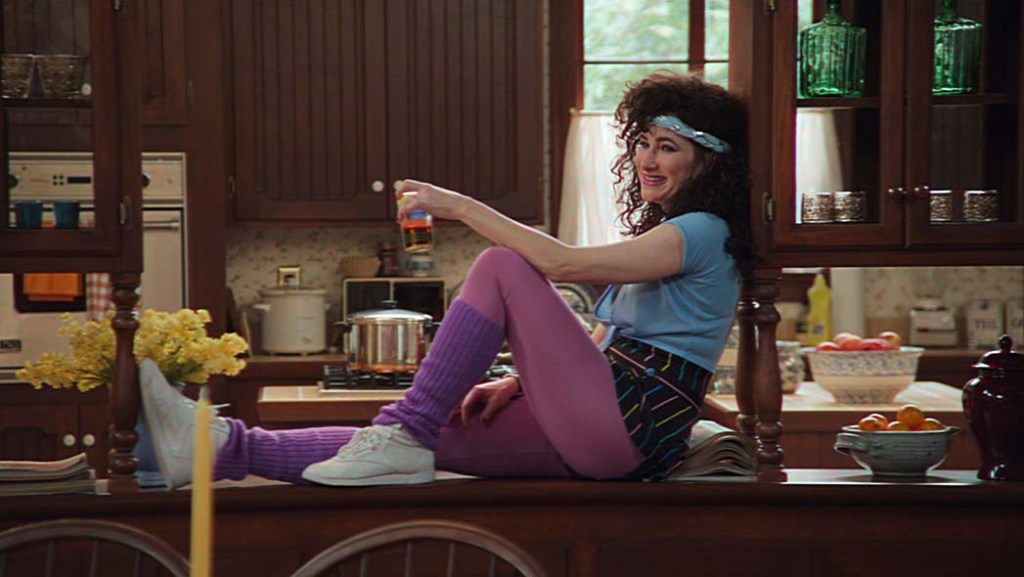 We haven’t reached the era that you grew up in, but were you able to incorporate any of your former fashion choices into the show?

No, but there are some decades coming up that if I had been in that decade, when that decade was in style, I would have given anything to wear those clothes. That would’ve been my dream, but we didn’t have cash for it. I was like, “I would’ve worn this all the time!” (Laughs.)

Since you’ve only watched yourself through the lens of modern filmmaking, seeing what you would’ve looked like during these different eras has to be surreal, right?

It is. Again, I’m so in awe and moved by the artists that worked on this. From all departments and from all angles in all directions — the hair, the makeup, costumes, production design, props — they made such bubbles for us to play in during each decade. It also didn’t feel cutesy or like a trick or that we were surfacing it. Every single decade was so fully realized, and as a newbie to this world, I was so blown away by the artists. At the press conference, Lizzie talked about the experience of working with some of these people — who’ve also blown up buildings and cars for Marvel, and done these big splashy set pieces — and to now see the same people making magic happen with plates and wires in a kitchen. So I was really blown away. Everybody was so patient with my jaw-on-the-floorness about everything because I couldn’t believe what I was watching. I was like a kid in a candy store.

I have to wrap, but was Señor Scratchy, the rabbit, quite a handful?

(Laughs.) Quite a handful! We are former rabbit owners over here, so I had some experience.

The Comics to Read Before 'WandaVision'