Viewers who have watched the first two episodes of Random Acts of Flyness know to expect the unexpected: So far, the HBO late-night variety series has produced a Peter Pan-inspired musical, a pharmaceutical commercial promising a cure for “white thoughts” and a children’s show about death, among other idiosyncratic documentary and fiction segments. Now, the social justice-minded show from creator Terence Nance is taking its goal of shifting viewer consciousness to another platform: It’s introduced a mobile video game to give viewers the first-person experience of street harassment.

Kekubian Assassin, which became available last weekend, puts players in the shoes of Najja, a character played by Dominique Fishback (The Deuce) in the second episode. In the show, a man leers at Najja as she is walking down a street at night and is subsequently struck down by a brick wall falling from the sky. Later, Najja plays a first-person shooter in an arcade that allows her to shoot down street harassers. In Kekubian Assassin, meanwhile, viewers play Najja as she heads to a bar and must “throw shade” at harassers while ignoring innocent passerbys. The experience culminates in a trivia quiz whose questions seemingly aim to debunk stereotypes about demographics most at risk for being negatively profiled on the street — one question is about Trayvon Martin, for instance, another about the demographic that purchases the most hoodies nationwide.

One of the minds behind the game — and the episode it ties into — is Nelson Mandela Nance, a writer, composer and transmedia producer on the show, as well as the creator’s brother. Nance wrote the second episode, “two piece and a biscuit,” and helped develop the game. (He also wrote the game music for both the mobile game and the game-within-the-show.) Following the Kekubian Assassin‘s debut, Nance spoke with The Hollywood Reporter about the games that inspired it, the Random Acts of Flyness writers room and the show’s take on “toxic masculinity.”

Tell me about how the idea for the Kekubian Assassin came about.

At one point in time in the writers room, Terence and I, or maybe Terence and Naima [Ramos-Chapman, a writer-director on the show], discussed how life is a game in beautiful ways. There are games that we intentionally put ourselves into, there are games we wander into at different times. But, you know, life can be dangerous: In particular, Terence threw out the idea of making a first-person shooter the narrative device for an episode. And so then from that, we all in the writers room discussed how this first-person shooter could function on different levels: as something that we would see brought to life in a pretty realistic way or one that is made of different levels of consciousness. And from that, it [came to] exist in the show in many different varieties and genres of the game. And as a result, we made a different level of that aspect of its existence by having a nonfiction version of the game.

The game people can play on their phones is not a first-person shooter with a toy gun like the one Najja plays in the series — what was the thinking behind that?

It’s an “on-rails” first-person shooter, so to speak, but it’s not like a move-around [version]; it’s not like Overwatch. But to a certain extent, a big influence on it was The Terminator 2 [Terminator 2: Judgment Day], arcade-cabinet type of games. And then, when it came to the portion of creating it for the real world, we wanted something that was easy to pick up and play. So we’re also inspired by “endless runners,” things of that nature, like Temple Run and Subway Surfers. Things like that are simple to play but can be coded in many different types of design tools to make it something that is its own particular experience.

The antagonists that Najja comes across in the game are pretty distinct. What was involved in brainstorming that — were any of these based off of collaborators’ real experiences, or the news?

It is, to a certain extent, multifaceted. There were portions of Najja’s existence in the writers room early because there were pieces that were different in the game than in Najja’s game that Terence had made [in the show itself]. And then in terms of our characters, they became more fully fleshed-out as we discussed the dynamics of communication relationship, and Najja was the voice that everyone in the room spoke through as a result. And so I think [because of] the fact that we had a fully, well-realized character that many different people helped create and make dynamic, when we began the game, we had lots of reference for the developers to guide the decisions just to make sure they got a feel for who she is. The performance and the philosophy of this character already had been made to be.

Who is the audience that you would hope would play the game, and what do you hope they would get out of it?

We’re hoping that everybody plays the game. It’s a pick-up-and-play game that we made with the idea that people can enter into it in the way they experience and change their lives [through design] because we live in a world where design guides a lot of our decisions and informs a lot of our processes now.

And so from that, we were able to discuss many different experiences that portions of our population have to go through that is unnecessary. The pain that women go through on a day-to day basis all over the world is traumatizing. To imagine that world, some people need a virtual experience — to reinforce the different types of perspective that they can never imagine. So even though this [game] is not necessarily a one-to-one ratio of life due to the simplicity of its interface, we’re hoping that people can have a major change in perspective of what people have to deal with and how they address it. 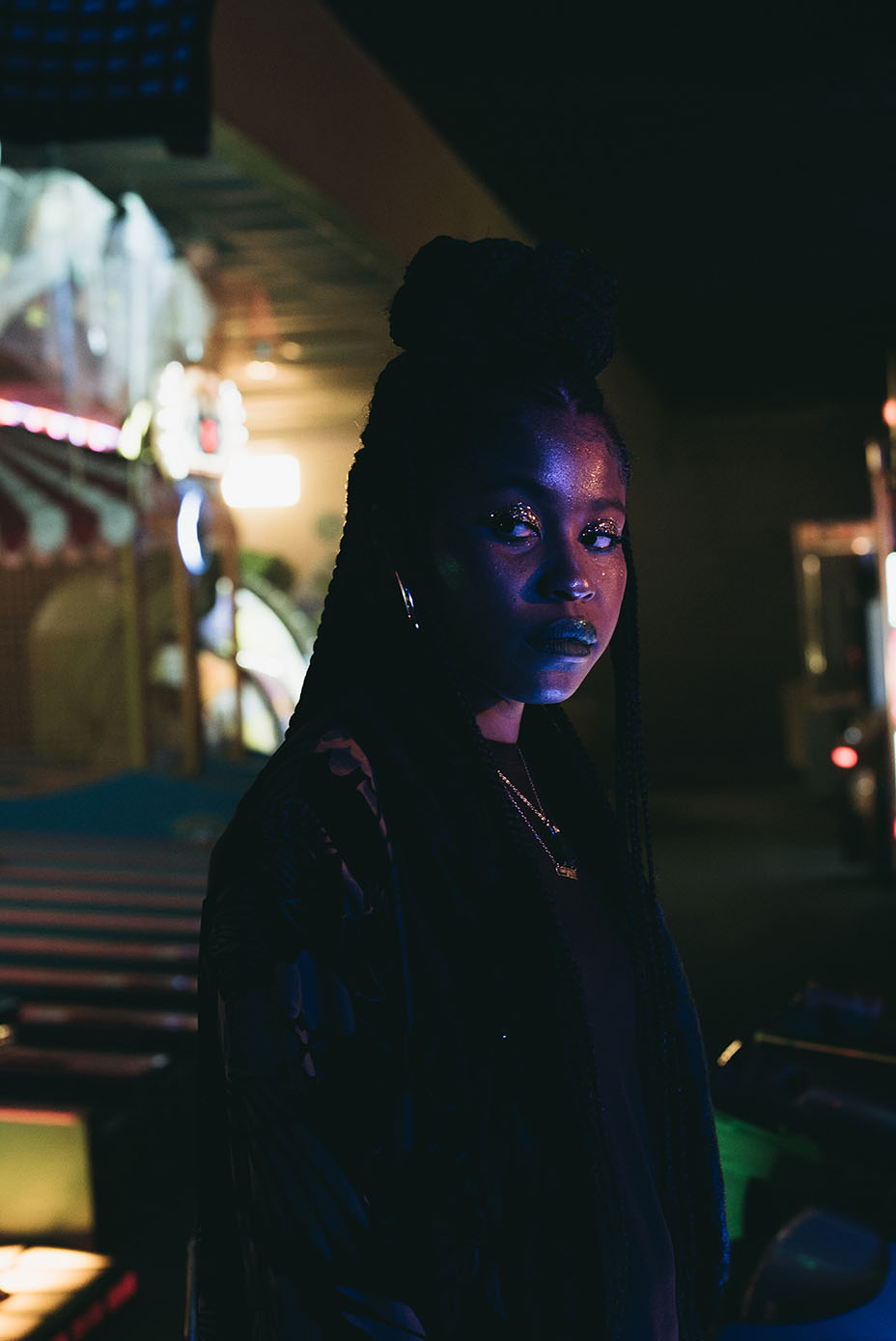 Will you be releasing other games or mobile experiences as the first season of Random Acts of Flyness progresses?

Many ideas. It’s not just “a” idea. In the episode, [subjects] talk about how discussing dreams, me and you and “the game.” Which is something the episode very much so discusses, in terms of game politics, game rules, all that is in it. Also, there are waves of patriarchy and toxic masculinity discussed.

In particular, I do think [toxic masculinity] was a guiding principle for how we began the conversation about street harassment: Starting with the “Good Morning” segment, that led to the conversation of how not to be a “creep,” that then led to the conversation of the game. So from the discussion of “How do men fucking deal with their big egos, fractured egos?” and how to converse and communicate in a way that’s much more personable and respectful, that turned into, well, what is the situation that they have created, levels that they have created, that others, a whole part of the population, has to deal with? What is the other side of that?

The writers room is a great place in terms of being able to discuss ideas in a very free-form manner: If there’s something we want to discuss, we can talk about the rebuttal, we can talk about the other side, we can talk about all types of dynamics. Ideally, the goal is to discuss all things beyond oppression dynamics because there’s so much more beyond the lens of what we understand about oppression dynamics. And so getting out of that lens allows a truly human discussion. We have to get rid of toxic patriarchy and masculinity going on right now: It was something that was happening from a press standpoint all around us at that time that we were working in the writers room.

What is the writing process like for Random Acts of Flyness?

It was one of building up ideas and allowing other people to sculpt the best, most refined version of each idea. So there’s a lot of ideas starting and passed on to people to help bring about what [we] knew others could actually do. And then other people go, “This is my idea but I know that you can execute it.” [Or] “This is my idea but I know I need to write this area.” And things of that nature.

You know the saying “Teamwork makes the dream work”? Sometimes, we would just have ideas — people would be like, “You know, I’ve seen this crazy thing in my mind, and I don’t really know what to do with it.” But then Naima or Mariama [Diallo, one of the show’s writer-directors] would just start riffing off of that idea, and then it became more or less the team’s idea, or their idea in terms of like, “Oh, I already know exactly what to write today, just based on your image or visualization.” So I think it was to a certain extent telepathic: There was no hard evidence of pitches, but there was a lot of that happening. And I think that could only happen in such a diverse writers’ room where we had many times of talented people in there that led to ideas that were discussed in a multifaceted way, from a well-cultured group of people.

So much of the show is such a surprise to see on television, even in the streaming era. Did HBO ever provide notes asking you or Terence or other writers to revise certain material?

I’m not 100 percent sure because I wasn’t part of that process, so I don’t know. Legally, there are things you can and can’t say publicly, just because of the world we live in. We’re not trying to empty out [HBO’s] bank accounts — that’s not our goal. Our goal is to work on a show that can help discuss a lot of the social dynamics in a healthy manner.

Something in particular that I wrote, the whole time I was writing it, the [writers room] were like, “We might not be able to do this.” It was an interesting idea, and after I read it, it was like, “Yeah, we’re not going to be able to do this but …” But within the philosophy of what I wrote, and many other people wrote, we were able to get ideas that turned into aspects of the show. But I feel like every show does that stuff.

What has the reception from the audience been like to your episode so far?

Amazing. I feel like it’s been a great reception. All we could have ever asked for is that people connect with it in a way that’s really honest and deep. And that’s what we’ve seen, is people really connecting with the show. That’s what we want, being in the conversation. The fact that we’re able to help navigate people to that experience, that’s all we’re trying to do, is have a place where people can communicate. If we’re not able to speak to each other and understand where we are, then we can’t go where we need to go, so we’re thankful, we’re very gracious for the atmosphere that people have been providing for the show. We just want to keep it going.

Can you give us any hints about what we can expect in the season’s third episode, which you also wrote?

I don’t know. It’s going to do a lot of crazy, awesome work. But I don’t even necessarily know, I mean, it could switch up on any random moment. It’s going to be some funky times.