[This story contains spoilers for the season two premiere of Killing Eve, “Do You Know How to Dispose of a Body.”]

It upended the established balance of the show, which had seen Eve as the sensible, hardworking and ever-more desperate MI6 agent and Villanelle as the eccentric, nearly impossible to catch killer. That carries into Sunday’s second-season premiere, which opens minutes after Eve’s assault on the woman who killed her partner, throwing the stylish assassin into an unusually weak position.

Prior to the season, Oh hinted at the huge shift that would greet viewers: “They’ve crossed a line and there’s kind of no going back,” she said. “We have a lot of energy at the beginning…and that pushes both of them into a different place of vulnerability.”

“Do You Know How to Dispose of a Body” delivers on that notion by dissecting the women at its core and throwing them both into an entirely new state of being.

In the heat of the moment, Eve has discovered a side of herself she wasn’t aware existed, her professional obsession with female serial killers suddenly seeming a lot closer to home after she’s potentially killed someone herself. Her choice to stab the woman she’d been stalking was one born entirely out of passion and vengeance for the death of her partner. Though it gave her momentary power, it also thrust her into a dangerous space and left Eve unable to share what she did with the only people who might be able to protect her.

The premiere explores how Eve tries to keep her secret — that she committed an act of violence rather than having violence enacted on her — while still getting on with her life. It subverts the idea of a victim: Eve is still a victim of Villanelle, who murdered her partner and has driven Eve to violence, but she’s ended up as an aggressor who’s gone along with whatever twisted game Villanelle is playing. 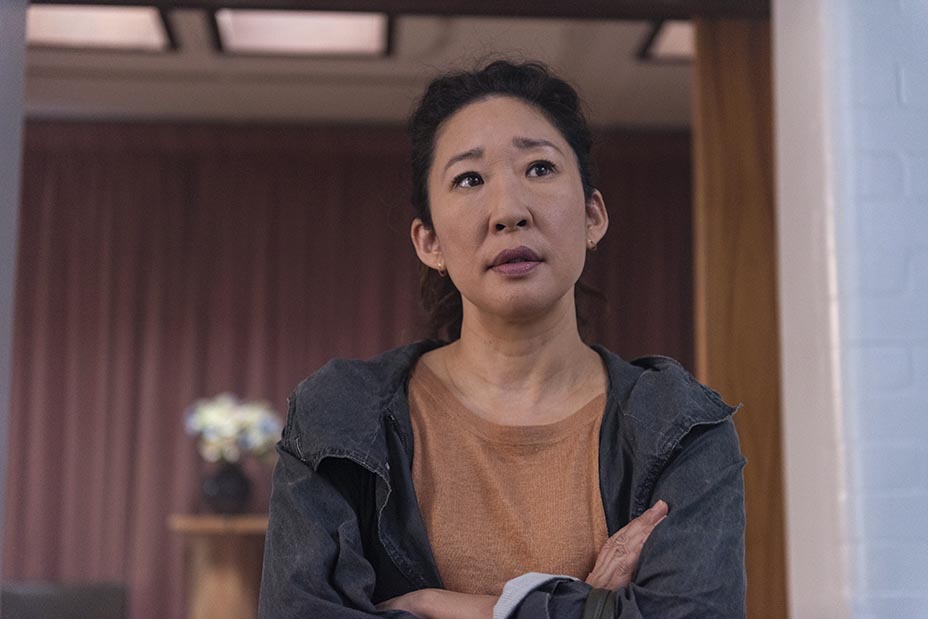 On the other side of Paris, Villanelle is at a loss as she scrambles to survive, begging for help from passersby and eventually ending up in a drab French hospital in a pair of children’s pajamas. Villanelle’s outlandish and often otherworldly fashion was one of the visual markers of her freedom in the first season, and this shift in her aesthetic is vital to her journey, according to Oh: “You see Villanelle in a completely different and vulnerable setting…[you’ll see] when she moves out of the vulnerable setting how much her clothing means to her.”

Gone are the lush European landscapes and bustling cityscapes of last season. Suddenly Villanelle’s world is incredibly small, literally confined within one ward of a hospital as she struggles to heal. She’s unsure of anything other than her need to find Eve.

This change is key to the direction that new showrunner Emerald Fennell wanted to take with season two. “If you get stabbed, even if you’re Villanelle, you need to find a way out,” she said. “I want to know how you clean your knickers, and the ins and outs of being a very vulnerable woman.”

With her nemesis out of action — and in her mind, potentially dead — Eve returns to London with a secret and a new job offer from Caroline (Fiona Shaw), which plays on the very obsession that drew her into the world of assassins in the first place. While Villanelle is suffering from the ramifications of Eve’s momentary loss of control, Eve is once again falling victim to her ongoing preoccupation with Villanelle.

It’s not only their own relationships that are feeling the impact of that fateful night in Paris. Villanelle is suddenly discovering her maternal side, or at least whatever her warped version of it is. The expectation of women to instinctively take care of and mother young children is one which Fennell and Co. take full advantage of here as they show the debilitated assassin apparently growing close to a young car-crash victim in the same ward as her. Their shared weakness and pain creates an unexpected bond between the two.

It doesn’t last long, though, and in a moment that betrays just how lost Villanelle is, she shares an intimate talk with the child in the bed next to her. She comforts him as he worries about his future without a family and with the severe disfigurements that he’s sustained. It’s a surprisingly tender moment, and one that puts Villanelle on an even more dangerous path, as in her weakened state she feels pity and in her own way offers mercy by embracing the young boy and snapping his neck. Despite its brutality, it’s a moment of weakness, one that puts Villanelle in a heightened state of peril. Although she manages to escape and taste freedom momentarily, she’s crossed a line that will likely define her path going forward.

It’s this delicate push and pull of control that kept the audience hooked and grew the viewership of the first season each episode, and this trend will likely continue as the simulcast on AMC and BBC America offers up a wider viewership. The first episode of season two shows that the ever-shifting relationship will continue to be explored under new showrunner Fennell, but so going by “Do You Know How to Dispose of a Body,” it’s going to be in a way that challenges the audience to reassess both lead characters.