Continue to The Hollywood Reporter SKIP AD
You will be redirected back to your article in seconds
Skip to main content
April 5, 2019 11:15am
Logo text

The second season of Killing Eve comes to BBC America (and AMC) Sunday following a breakout first season in which the audience grew for every episode. On the red carpet for the sophomore season’s premiere, the women of the series spoke about why the show resonated and what’s in store for season two.

Moving into the second season, new co-showrunner Sally Woodward Gentle wanted to stress a couple of things.  “We tried to make sure that even though Villanelle [Jodie Comer] is this extraordinary, sexy woman, that wasn’t who she was as a killer. I think that was really important,” she said.

The second mission for season two was “to play with the sense of power, powerfulness and powerlessness that people feel, and also how idiotic men can be.”

Gentle told The Hollywood Reporter the fact that Killing Eve has women in lead roles both in front of and behind the camera gives the series a unique viewpoint: “I think because the majority of the writers are women, we never saw the show through anything but the female gaze. That’s the reason I wanted [series creator] Phoebe [Waller-Bridge] to write it. I didn’t ever want Villanelle to be some sort of sexy, sassy assassin who kills people with her thighs.”

Waller-Bridge stepped away from showrunning duties for season two due to multiple other commitments, leaving the show in the hands of Woodward Gentle and Emerald Fennell.

Fiona Shaw, who plays the duplicitous and deliciously sarcastic MI6 agent Caroline, thinks Killing Eve could have succeeded in any era, but the powers who be weren’t ready for it.

“I think that the show might have done very well 10 years ago,” she said. “I think it’s probably been too long in the coming. I think that people have decided that what the culture needs is that we must always have a white male as the hero in the middle of shows, and it just isn’t true.” 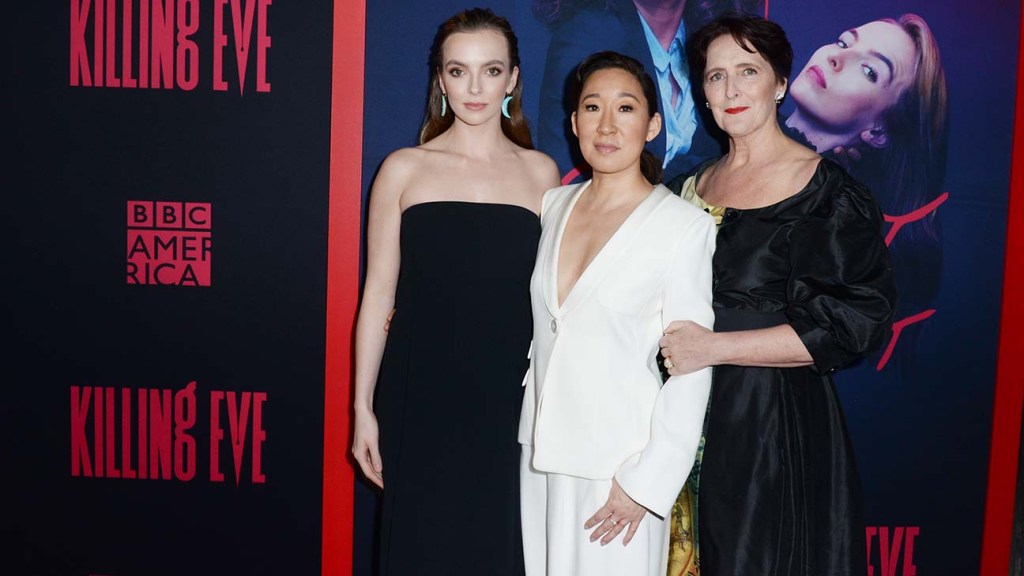 For Comer, who plays the eccentric assassin at the show’s core, the show’s success stems from the fact that the characters aren’t easily put in a box. “There are no stereotypes, there are no tropes, these women are so unapologetically themselves,” she said. “The fact that they are complex, and not ‘strong’ — I hate that term — but are flawed and not always powerful, is so unique.”

After her startling turn as Eve Polastri, Sandra Oh was showered with accolades, including SAG Award and Golden Globe wins and an Emmy nomination. Though she recognizes how her performance has spoken to fans, Oh believes it’s not for her to say why the show resonated the way it did.

“It’s complicated for me,” said Oh. “I think the more that it’s challenging creatively and it’s complicated creatively for me, I hope that’s what translates to people. They say, ‘Oh, this meant this to me, it meant that to me.’ And it’s like, ‘Oh, well, I wasn’t personally working on that.’ So I want to keep it as open as possible.”

For fans, of course, it likely comes down to the nuanced women at the center of the show, and Woodward Gentle shares that sentiment.

Woodward Gentle told THR that the nuanced characters of Eve and Villanelle will continue to drive season two: “All the relationships are so heavily female and they’re complicated. They’re not some romanticized vision of how women behave, they’re truthful,” she said. “So not only does it focus on relationships with men, but it’s also the relationships to women as well.”

Shaw hopes Killing Eve and shows like it can further push the boundaries for roles women can play.

“We still haven’t had the drunken, ugly, mean-spirited female heroes that we have in the male world,” she said. “It probably helps our show that the two of them are gorgeous and dressed up. Maybe the next phase will be centering the tramp detective woman who lives with 12 cats. I would love that.”