“No.” It’s a short word, but not a simple one, as operative Eve Polastri knows all too well.

In the second-season finale of BBC America’s Killing Eve, Sandra Oh’s Eve turned her back on the chance to abscond with the object of her obsession: Villanelle (Jodie Comer), the psychopathic assassin and budding star of global crime syndicate The Twelve. As it turns out, saying no and literally turning your back on a vulnerable Villanelle is a grave mistake: Just as Eve stabbed Villanelle in the season one finale, Villanelle returned the favor in season two’s climax, shooting Agent Polastri and leaving her for dead.

What now? The answer’s coming as Killing Eve charts its season three premiere for April 12, airing concurrently on BBC America and AMC. (The season is set to air two weeks earlier than initially expected, filling a void left by AMC’s The Walking Dead, which ended prematurely due to impact of the coronavirus.) It’s not a spoiler to reveal Eve survived the shooting — her name is right there in the title, after all — but where did she land? It’s a bit more complicated, even if it’s as simple as things can possibly get for the wounded Polastri right now.

“At the top of season three, you see Eve in recovery,” the Golden Globe-winning Oh tells The Hollywood Reporter. “Although in some ways it doesn’t look like recovery, it’s still a type of recovery. It’s a retreat. She’s retreating into a place where she feels safe, where she feels anonymous, where her tasks in some ways are very simple and very grounding.”

“She saw the consequences of what happens when you say no,” Oh continues. “She said no, and she was shot. Now we’re seeing her recovering. She probably only travels a 4-mile radius. That’s how tight her life is — and she’s fine with it.”

Less fine with a tight life: Villanelle, used to living lavishly, long before encountering Eve. But things are not exactly simple for the world’s greatest killer (at least in her own estimation), either, even if the season premiere finds the erstwhile Oksana Astankova in very surreal circumstances — the first of many times viewers will see more of what’s lurking beneath Villanelle’s veil of death this year.

“She’s having to face a lot of her truths this year, a lot of her past,” Emmy winner Comer tells THR. “A lot of it involves flickers of moments we’ve seen previously in the series — those times where you wonder if she actually feels anything in a moment, is she remorseful, does she have any sense of mortality — and all of that is delved into [this season]. But I also think we see her in some very vulnerable situations. It was really fun for me to play, actually. I’m so aware that the person who we met in season one is the same person she is now, but also very different. It’s very important that we as a production grow and listen to what it is [that Villanelle] is saying and experiencing, and trying to stay true to that.”

The character continuity across the preexisting 16 episodes of Killing Eve continues with the oversight of series executive producer Sally Woodward, who stresses the single most important goal of the show moving forward: “We never want to repeat ourselves.” 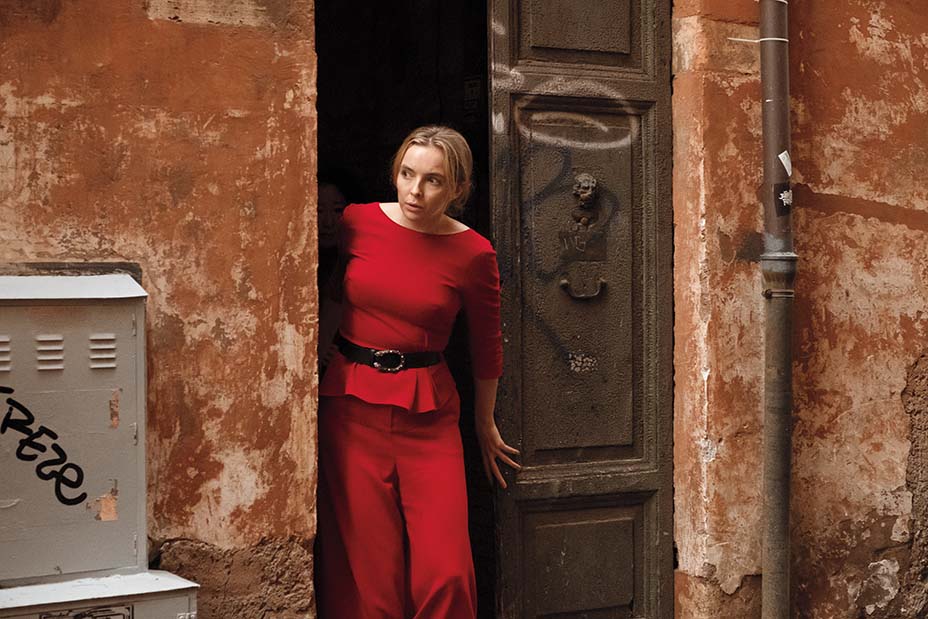 “After Rome, Villanelle has walked off thinking Eve’s dead,” Woodward explains of where viewers will find the assassin at the start of season three. “But she’s also walked off realizing she was duped, not just by MI6, but by Konstantin (Kim Bodnia), who has essentially used her to make himself more safe and comfortable. She’s been abandoned by everything around her. We wanted to explore where she goes next. What’s her currency? How does she define herself?”

As for Eve, Woodward promises, “At the end of season two, I think we were very aware that Eve fooled herself into thinking she could control an extraordinary being like Villanelle. It’s resulted in her ax-murdering someone to death. What do you do with that? And someone just tried to shoot you dead. What do you do with that? How do you continue a normal life? Can you ever rid yourself of the trauma of that? Can you just leave it behind? I don’t think you can.”

The person charged with answering those existential questions about Eve and Villanelle: new head writer Suzanne Heathcote. For season three, Killing Eve continues the tradition of a new showrunner helming each season, with Heathcote following in the footsteps of Fleabag creator Phoebe Waller-Bridge and The Crown veteran Emerald Fennell.

“I was very lucky to have two predecessors in such a unique job,” says Heathcote. “Getting to talk to them about their experiences was so invaluable. They gave me loads of advice to start. Phoebe and I remained in contact throughout. She read the scripts, we talked things over, she was always there if I had any questions or needed to run something by her. We spoke just last week at length. She’s a brilliant resource. Having the person who created the character on call like that is so amazing.”

'Killing Eve' Renewed for Season 4 Ahead of Season 3 Debut

Conversations about Killing Eve characters resulted in the greater season three goal of deepening the existing players, while also creating new ones, killers and curiosities with rich backstories and shocking dynamics with the established cast. Case in point: Harriet Walter as Dasha, one of the most prominent new figures on the board, powerfully connected to Villanelle and tragically barreling toward some of the other people in play.

At the same time, Heathcote viewed season three as an opportunity to push further on what makes leads like Eve and Villanelle tick, but also dig deeper into some of the other members of the ensemble — such as Fiona Shaw’s Carolyn Martens, the stone-cold spy who rarely reveals her cards. Expect those cards to turn over in dramatic fashion throughout season three, thanks in no small part to a leap forward in time from the point at which season two ended.

“By the third season, I felt we earned seeing more underneath each of the characters, what makes them tick,” says Heathcote. “I also felt consequences were very important this season. So much has happened in the first two seasons in a short space of time. We really needed to see the consequences and results of those actions, how they’ve really impacted the characters’ lives. I felt it was important we had a bit of a time break before the third season, so the impact of what happened in those first two seasons really lays into those characters.”

The result of those consequences coming home to roost: more consequences coming home to roost — a series of problems that kick off in violent fashion as early as the premiere, with the promise of playing out across season three and far beyond. Killing Eve has already been renewed for a fourth season, with season three alum Laura Neal the next person tapped to step into the role of head writer.

“It’s what I love about the fact that there’s always a different woman at the helm,” says Heathcote. “We’re all there to support each other. It’s a fantastic thing. I’m in touch now with Laura, who was a writer on season three. It’s so great. Phoebe and I were talking about how all of us — all of the women — will have to meet up for a few beers when lockdown’s over.”