Killing Eve’s second season spent its first four episodes with the two women at its core separated and struggling to come to terms with their new status quo. But in Sunday’s outing, “Smell Ya Later,” Eve (Sandra Oh) and Villanelle (Jodie Comer) are finally reunited in a darkly romantic moment that leads to an unexpected twist that changes everything for the pair.

Showrunner Emerald Fennell spoke to The Hollywood Reporter about building up to the surprising team-up, the love affair at the center of the show and the necessity to challenge the pair’s mounting mutual obsession by “making it official.”

Eve’s and Villanelle’s paths have been on a collision course ever since the season one finale — when Eve stabbed Villanelle in an ornate Paris apartment — and “Smell Ya Later” makes good on the promise of the chase, with their cat-and-mouse game coming to a head. Fennell said it was vital that the inevitable moment came naturally: “After the stabbing and being in the proximity of each other, they needed time to recover, they needed time to just feel out what their lives are like apart. But I think the truth of it is that these women are like water going down a plug hole. They’re being sucked down and there’s no way that they’re going to stay apart.”

It was Eve’s ever-growing desperation to see Villanelle that set their paths in motion. She concocts a harebrained scheme that involves paying for a hit on herself, banking on the fact that the woman she stabbed wouldn’t repay the favor. In a scene that reflected the pair’s first meeting in season one, Villanelle appears in Eve’s kitchen in a twisted mockery of domestic bliss, where they share a (possibly poisoned) drink during a physical and psychological interaction drenched in sexual tension.

The nature of the pair’s relationship has long been a topic of conversation, but for Fennel there is no doubt that love is involved. “Villanelle overtly loves Eve, she is obsessed,” she said.

But for the other half of that pairing it’s far more complex. “Eve is still in that phase of an affair, to liken it to something more mundane, where you say to your friends, ‘Oh, my God, I hate so and so, they’re so pathetic’ And they sort of go, ‘Well, you’re talking about how you hate them an awful lot.’ Everyone else can see what’s happening, but she can’t admit it to herself. It would be too horrible for her, too awful to admit her true motives. But Villanelle is undeniably sexy, and the tension between them is undeniable. So it’s just a matter of how long it can be denied.” 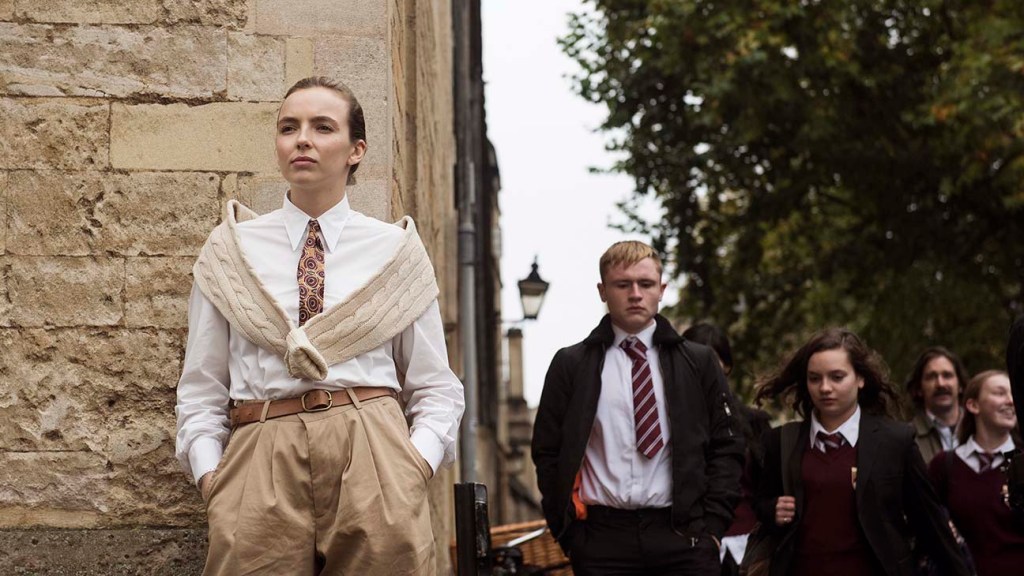 The series has always played as a subversion of the obsessive detective stories that make up so much of the crime-thriller genre. In an unsettling turn, this episode tips the show over the edge into the territory of killer-detective team-up stories like Hannibal and La Mante as Eve enlists Villanelle to help her on a case, a route that Fennell and the writers decided on exploring quite early.

“What seemed really interesting was that rather than setting up this sort of illicit circumstance, was to say, ‘Actually, well, if Villanelle is for hire, then what if someone in MI6 needed to hire her?'” said Fennell. “Because in a catastrophic situation she can be useful.”

After weeks of ever-escalating tension, it’s a startling shift in the pair’s relationship, and one that will have a big impact on the two women going forward. “It just felt like a really exciting thing to do, to see what happens when they’re suddenly out in the daylight and how that affects their relationship. We wanted to see what would happen when they were legitimately together because so much of what makes up obsession is the fantasy of it,” Fennell said. “Because suddenly it’s not your sexy secret anymore, it’s part of your day job.”

Eve’s journey from obsessed avenging angel to complicit player in the world of international espionage has brought her to a place that Fennell describes as “rock bottom.” So what comes next for Oh’s award-winning (anti-)heroine?

“The thing is about Eve is that she crossed the biggest line when she stabbed Villanelle, and she’s been crossing them ever since, to the point where they’re not even really lines anymore,” said Fennell. “But she’s also, underneath it all, a truly good person and she identifies as that, so at some point she’s going to have to make a choice, and now it’s all about what that choice is going to be.”

With Eve and Villanelle working alongside each other, the episode ends on a note that feels like a new order has been established, but Fennell was quick to warn viewers not to get too comfortable. “What we know is that these women have a sort of fatal attraction,” she said. “So can you ever really just leave them alone in an office talking about what to get Jerry for his birthday or that the fax machine is broken? I think we all know that isn’t possible, so this is not a status quo that can be upheld for very long because it’s just too dangerous.”