[This story contains spoilers from the season one finale of Showtime’s The L Word: Generation Q.]

LGBTQ history was not made during Sunday’s season one finale of Showtime’s The L Word: Generation Q, which delivered a series of devastating blows to its original stars.

The finale, which showrunner and episode director Marja-Lewis Ryan approached with uncertainty as the sequel series had yet to be renewed when it was written and filmed, delivered a shocking political loss to Bette Porter (Jennifer Beals), who was vying to be L.A.’s first openly gay mayor.

Meanwhile, Shane’s (Kate Moennig) ex-wife Quiara (Lex Scott Davis) leaves her after suffering a miscarriage. Alice (Leisha Hailey), on the verge of losing her talk show, makes one final effort to avoid cancellation with guest Roxanne Gay, and dramatically reunites with her girlfriend Nat (Stephanie Allynne) after a failed attempt at polyamory.

As for the new faces of Generation Q, Micah (Leo Sheng) discovers that his boyfriend Jose (Freddy Miyares) is actually a married man. Sophie (Rosanny Zayas) also found herself torn between her fiancé Dani (Arienne Mandi) and her friend-turned-lover Finley (Jacqueline Toboni).

Below, Ryan speaks with The Hollywood Reporter  about the events of the finale, Sarah Shahi’s status with the revival and the larger subjects she hopes to explore in the previously announced second season.

You ended the season on a cliffhanger. Were you concerned about ending that way if you hadn’t gotten a renewal?

We didn’t know we were getting picked up; there was a real possibility that this was the end. I remember while we were shooting it, Rosanny comes up to me and says, “I just realized if we don’t get picked up I am going to get screamed at on the subway forever.”

Were you tempted to end the season with Bette’s election results?

Some people were curious about the election and why didn’t the season close with the election. I always say, because we aren’t making Scandal. We are not a political drama. What we care about is the aftermath of that — how does that outcome affect friendships and relationships? That is the show we are making. 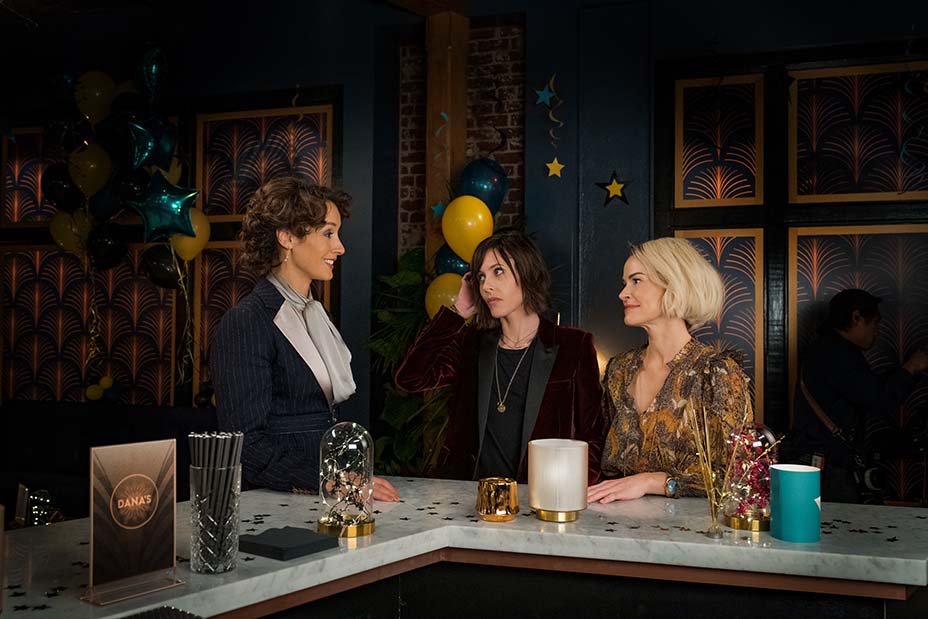 It seemed as though there was a deliberate choice to make the first half of the episode about devastating losses, but the second half about new beginnings. Walk me through the decision behind that.

Yes! That is another reason not to end on the political tragedy. I want the audience to feel like there is an upswing of hope and that everybody is starting anew in some way. Even if it is in a small way, like with Shane and that dog. The idea that relationships can make it through hard times is a lesson that is important on this show. Also, that Jose/Micah reveal, we were dying to make that in episode eight. We always knew that that’s where we were going. That story came out of our writers room. A lot of us had similar experiences of being epically deceived by somebody that we were dating.

Bette lost the mayoral race and found out the opioid crisis position she was offered is a trap. Is her fight to be mayor over now?

We have a political consultant on the show and a lot of the things that we see are that candidates go back to being a hybrid of two things. Cynthia Nixon is a good example, she became an activist in the spaces she was most championed, but she went back to acting. We are not totally sure where Bette will fly, but I don’t think that activism side will ever fully leave her.

How did the original cast feel about the journeys of their characters in this first season?

For Jennifer, we talked a lot about the five stages of grief when it came to this whole season and the relationship that she has with her daughter and the way her daughter sees her in a way other people can’t. I was really happy about where they ended up. I love the way that they can play. That feels really important in terms of her character development and what we hadn’t seen of her in the original. For Alice, we talked about the idea of wanting to be a queer person and realizing that maybe there are some things that aren’t for her is a real journey that a lot of queer people go on. They are not as queer as they hoped to be and that is OK. You can still be gay and want a heteronormative lifestyle. You are still invited to the party. We talked about the idea that Shane doesn’t want kids and never wanted kids, but wants to make this woman happy and wants to love somebody. However, she ultimately does not want kids and that is OK; women not wanting kids is OK.

I love Sarah Shahi. I loved Carmen on the original show. We are very interested in the ways in which casting has changed over time and it is challenging for us to imagine a world in which a Persian actress is playing a Mexican American. I’m not trying to crush anybody’s dreams; my dreams are crushed too. I’m with all of you, but we are moving ahead in terms of representation.

Shane is back where she began in the pilot — alone — but with a dog now. Will this be the best relationship she ever has?

That’s kind of the joke about it, maybe the dog is Shane’s permanent love interest. I also get a lot of shit on the internet about how there are no animals on the show, specifically cats, but I feel like a dog might satisfy some of those calls for more animals. That dog was so fun to direct. It was hilarious, we would call cut and Kate and I would look at each other like, “this dog is amazing.” 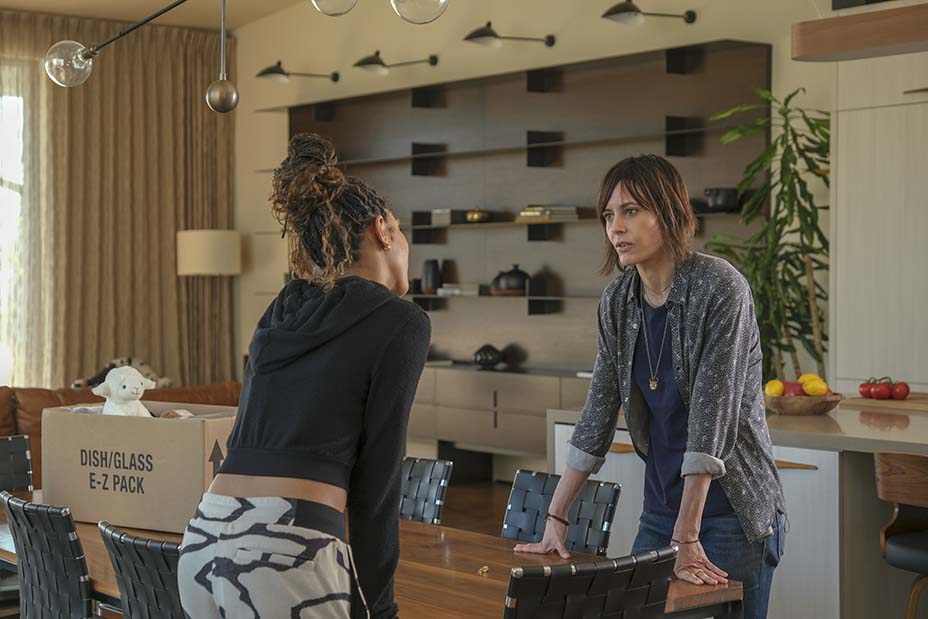 Will we see more of Quiara?

I don’t know! The one thing that I am interested in, because this happens all the time as a lesbian in Los Angeles, I run into my exes way too often. It is sort of fun to build up enough of a world now that we can have those moments where somebody unexpected shows up from the past that has been on our show or previous seasons of the original. Like Tina and Carrie, when is that going to blow up?

Yes, speaking of Tina and Carrie, she is getting married but is looking for a place near Bette. What does that mean for Laurel Holloman’s involvement in the show?

I think just knowing that they are around leaves open the opportunity. We will see what happens. No promises, Tina and Bette lovers.

Will we see more of the Shane/Finley dynamic in the next season?

I think we are building something there with Shane/Finley/Tess for season two. I really love the three of them. I love the Tess/Finley relationship, I love that they sleep together and Tess says “it’s never going to happen again” and Finley says “I did not know that.” All of that stuff feels very real to me. When you sleep with someone who’s got 15 years on you and knows how to live in this world, you can learn some things.

Did you see what I did with it? I tried to keep it involved with her world but without it being about hookups.The art department made this gorgeous chart of all of Alice’s guests. It’s called The Guest Chart, it has Alice’s name right in the middle and then there are all these lines that are connected to famous queer people. That was our adaptation of the chart for the new generation. Maybe I will put it on her set. 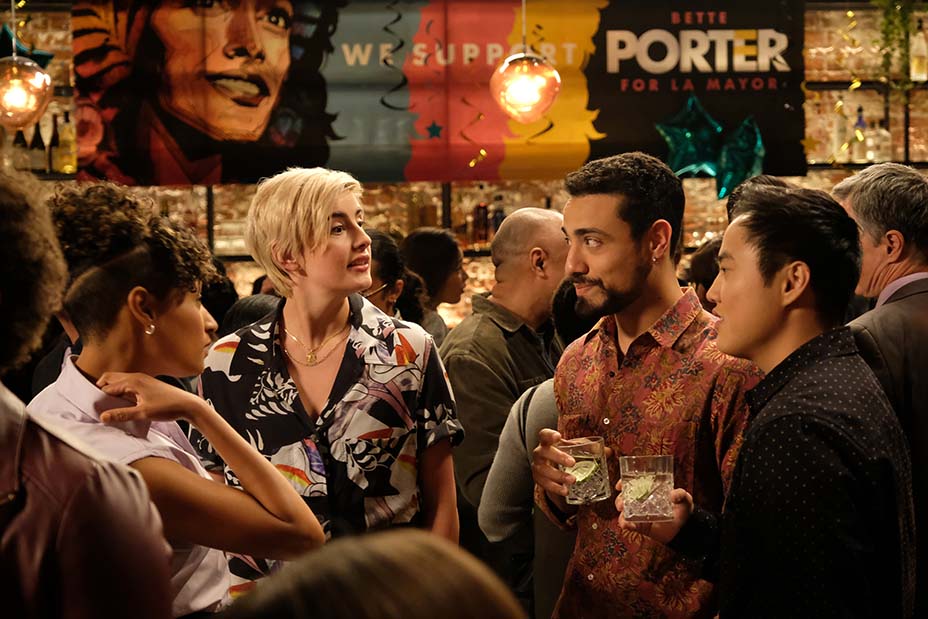 What sort of other LGBTQ+ relationships are you interested in exploring going forward?

We are still interested in exploring a polyamorous relationship more in depth. Part of our move with keeping Alice and Nat together is that polyamory works for some people and it brings some people closer. To actually approach their relationship from the perspective that they are actually going to stay together is very fun. I am excited about finding different representations of gender, we don’t have any primary nonbinary characters right now. We are always on the lookout for more representation.

Are there any aspects of the LGBTQ+ journey you really want to highlight next season that you don’t think are represented well on TV as it is?

There are a billion things! I don’t have any bigger women, I don’t have dark-skinned women. Even though I have representation, I haven’t gone into some worlds. I love that we know Sophie’s family, but what’s Gigi up to? Can we go to Little Armenia? What’s Little Iran like? I want to go into the city in a way that we haven’t gotten to explore. There are so many stories that we haven’t told. I am getting shit for only having lesbians on the show, but they are not all lesbians but it’s just that you have seen them in these relationships. So, I want to explore what pansexuals look like in 2020, what bisexuals look like in 2020.