Nothing stays in Vegas. The city’s aging tourism slogan is still catchy but it’s always been a lie. What you do and witness in Nevada’s neon hub of indulgence sears into your memory like a stubborn tan line. So it’s little shocking that, nearly a month out from Fox’s extravagant interstate promotional stunt for airplane-set comedy LA to Vegas, I can’t shake the image of a cigar-smoking Dylan McDermott shooting craps at the Bellagio.

LA to Vegas officially premieres Jan 2, but it got an atypically lux rollout in early December when Fox flew roughly 150 executives, reporters and those ever-ubiquitous influencers on a round-trip chartered 737 (wrapped like a title card) to a whirlwind party at the casino famously plundered by Danny Ocean and his merry troupe of bros. Actors drifted in and out of character. Two episodes screened mid-air, as tiny bottles of scotch and vodka rolled back and forth under the seats. Tray tables were not stowed for landing. Golden Globe winners and many others grappled internally with what it means to be an influencer. And, yes, the Vegas portion of the evening ended with McDermott holding court on the casino floor while several dozen onlookers cheered him by chanting his character’s name (and alter ego of the night) “Captain Dave.”

This, in 2018 or the recently departed 2017, is not how networks typically herald the arrival of a midseason sitcom. So it was curiosity over Fox’s atypical enthusiasm for the workplace comedy, not a particular affinity for the town, that convinced me to check out the seven-hour affair. (That and a morbid curiosity that the whole thing might dissolve into bedlam like Rihanna’s infamous 777 Tour, the last aerial promotional stunt I recall hearing about.)

“Screening the entire pilot Modern Family at Lincoln Center was really something,” executive producer and pilot director Steve Levitan told me, recalling his last TV launch at a booth in the Bellagio’s Lily Lounge. “But this, I’ve never done anything like this before.”

Their extravagant party isn’t the only first. Levitan’s role on LA to Vegas is a moonlighting gig since launching his Emmy and ratings juggernaut with co-creator Chris Lloyd back in 2009. It has been the focus of all of his professional energy since. And, with the past year bringing another two-season renewal, Modern Family‘s end is now in sight — with a tenth and all-but-official run to wrap in 2019. As his new cast made the most of their two hours on the strip, he spoke about that end and what it means for his own storied career.

This is the first thing you’ve done outside of Modern Family in almost a decade. What piqued your interest?

I’ve been writing for so long that it was really nice to direct something that I didn’t write. We worked things out while we were doing it, but the fact that it came from someone else and that it was a really good script, that makes it feel fresh. I’m 10 years into Modern Family, so it’s nice to do something different. I can turn to someone and say, “What do you think?” And it’s the person who actually thought of the idea.

Looking a year and a half down the line, when Modern Family is done, what are you thinking of as your next chapter?

Doing more of this. What I’d like to do most is find really good projects from people who don’t really know their way through the system. Maybe they don’t quite know how to run a show, or think about things in the long term, but they’ve created something really wonderful. To help them through that, and bring it to life, that’s what interests me most right now. That’s not to say that I won’t create something. I want to go down this road for a while — direct and producer more, but maybe not be wholly committed.

Why no moonlighting before?

When I get into a show, I’m very into that show. With Modern Family, it’s a long time to be doing one thing. But I made a commitment a long time ago to see it through from beginning to end. When it finally does end, it will be nice to do different things.

With so much TV right now, there’s also so many green writers working on their own series. How much do you think about mentorship?

The networks and the studios are very open to those people now. “Wow, this is a pilot from an unknown person, but that person honestly doesn’t know how to sustain that for 22 episodes — or even 13 episodes. It’s hard. You need to put a system in place. You need to navigate network notes, studio notes, dealing with your cast and budgets. They don’t know how to do it. I know how to do it. I enjoy the idea of imparting someone with that wisdom that’s come from experience. What’s significant for me is making sure that those people get the credit that they deserve. This idea was Lon Zimmet’s, and it’s a great one. The more I see him growing into the showrunner, the happier I am.

But you’re still interested in working something on your own again down the line?

When Modern Family ends, and I maybe have a little break, I could do something. But that’s it for now.

Do you have any ideas?

I have some ideas, but I’m not even going near them right now. I’m letting them percolate. My life has taken a lot of twists and turns, and I think I have some things to say. Just the way that I was working on family things with Modern Family, I have some new areas that interest me. But I just want to sit back a minute and see where it goes.

—
Soon after we spoke, the cast and revelers were pulled from their respective tables and machines to the awaiting shuttle back to the airport. All remained on their best behavior, despite circumstances doggedly working against them. And while I’m told no one vomited on the plane, I cannot confirm that from any firsthand account. I’d reached my fill of influencers for the night and opted to stick around until a $40 return the following morning on a craft not too different from the seedy, budgeted airline featured on the show. Occasionally some of us do stay in Vegas. 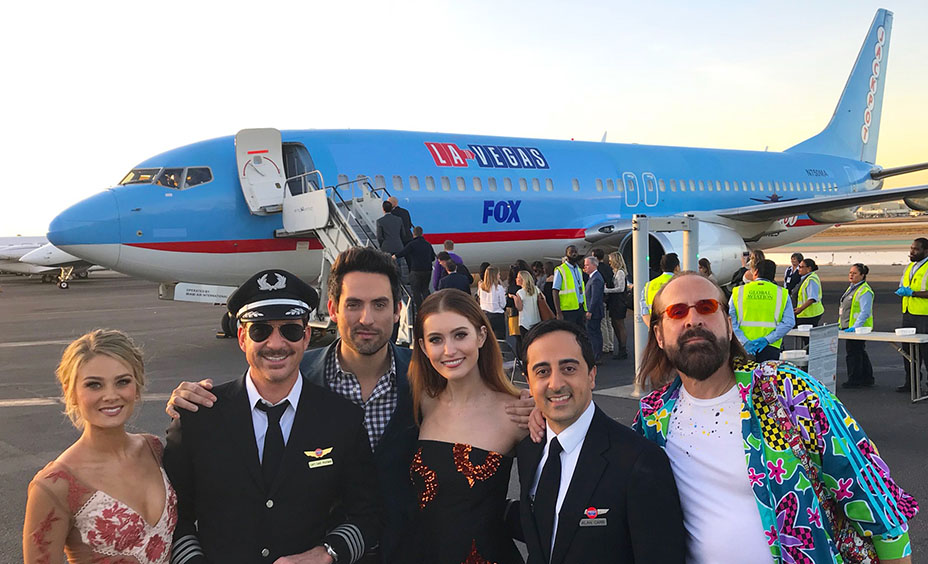 The cast of LA to Vegas before takeoff