For Larry David, there is no such thing as being politically correct.

“I don’t think the fans who watch the show want me to be politically correct or do anything differently,” the creator and star told The Hollywood Reporter ahead of the premiere for the ninth season of Curb Your Enthusiasm. “So I haven’t done anything differently. It’s the same.”

After a six-year hiatus, David makes his return as Larry when the HBO comedy premieres another 10-episode season on Sunday night. Ahead of the highly anticipated launch, HBO feted its most-famous curmudgeon with a New York City premiere event on Wednesday, where attendees were treated to two episodes of the upcoming run.

Before the screening, a voiceover from TV Larry beckoned through the speakers at the SVA Theater. “Thanks for coming — actually, you should be the one thanking me. Do you have something better to do on a Wednesday night? Eh, I don’t know so,” said David in character. He explained the premiere sets up the entire plot and that the second episode of the night would be a stand-alone airing later in the season, in a bid to not give away too much of Curb‘s master plan. Larry then had two specific requests: Don’t spoil the episodes and please keep the hand-shaking to a minimum at the afterparty.

Why 'Curb Your Enthusiasm' Launched Season 9 With That Bombshell

“The only thing Larry cares about with doing this premiere in New York is that everyone who is watching the show tonight doesn’t tell anybody what happens until Sunday,” executive producer Jeff Schaffer told THR ahead of the screening. “He wasn’t worried about what to wear or the guest list, all he was saying is, ‘Isn’t everybody going to tell everybody?'”

Of the two episodes — which were greeted to big laughs and several rounds of applause inside the theater, kicking off with the show’s signature opening tune — Schaffer said they were methodical when it came to picking which episode to screen after the premiere. To keep the season hush-hush, no screeners will be sent to press after the show launches. “Sometimes in the middle of the season there are some stand-alone ones,” he explained of their choice, which is the fifth episode. “We do setup something that’s crazy and we didn’t want to give more of it away — and when I say we, I mean he.”

The main returning players — Jeff Garlin, also an executive producer, Cheryl Hines, Susie Essman and J.B. Smoove — were all in attendance as celebrities and comedians from Amy Schumer and John Oliver to Aziz Ansari descended upon the theater to see what Larry and the gang had been up to in these last several years. The eighth season ended with Larry and Leon (Smoove) escaping to Paris and although Lauren Graham has been added to the cast as a love interest for Larry, one of the biggest questions heading into the season is whether he and Cheryl will reconcile. But mainly, Larry and the cast are all back to doing what they do best.

“Basically, I make a living telling people to go fuck themselves,” Essman told THR. “Not only do they pay me, they love me for it! I never planned on this being my life, I just wanted to make people laugh. But Larry gave this part and the rest is history. The first day on set was like we were there yesterday, like we were there last year.”

Despite the show taking place in current time, her character, Susie Greene, isn’t a political person. “She’s a Beverly Hills housewife and she’s all about her family,” she says. “What she really cares about is making sure Jeff Greene (Garlin) keeps his money. Why do you think she stays with him? A lot of women have arrangements.”

That sentiment, for once, is where David and Susie agree: Trump’s election hasn’t changed anything. “It doesn’t impact the show at all,” the creator plainly says.

A message to Larry David from Susie Essman at the #CurbYourEnthusiasm premiere pic.twitter.com/WtP0x2JITn

Essman has seen eight of the 10 episodes and says the finished product is some of David’s best work. The season trailer features Larry shushing a crying woman at a funeral, shoving a pushy perfume saleswoman and proudly accepting a comment from Richard Lewis that he is devoid of anything empathetic. “Larry is so funny this season that I think people are just going to be tickled to have him back,” she adds.

After the screening, guests were shuttled to TAO downtown where Garlin surprised attendees for welcoming photos and the cast, led by David, spent the majority of the night posing for pictures with fans.

Though David and his team have remained tight-lipped on what’s in store for the remaining episodes, Schaffer has said the finale “goes to this really strange, fun, crazy place” that viewers won’t expect. “It is one of the most ambitious things we’ve ever tried — and it worked!” he told THR when recounting his all-time favorite Curb episodes. “It is going to be a classic.”

The hyped ending begs the question — is a 10th season of Curb already set in motion?

“If I do another season, I’m not going to wait five years — that I can tell you,” David told THR with a smile. 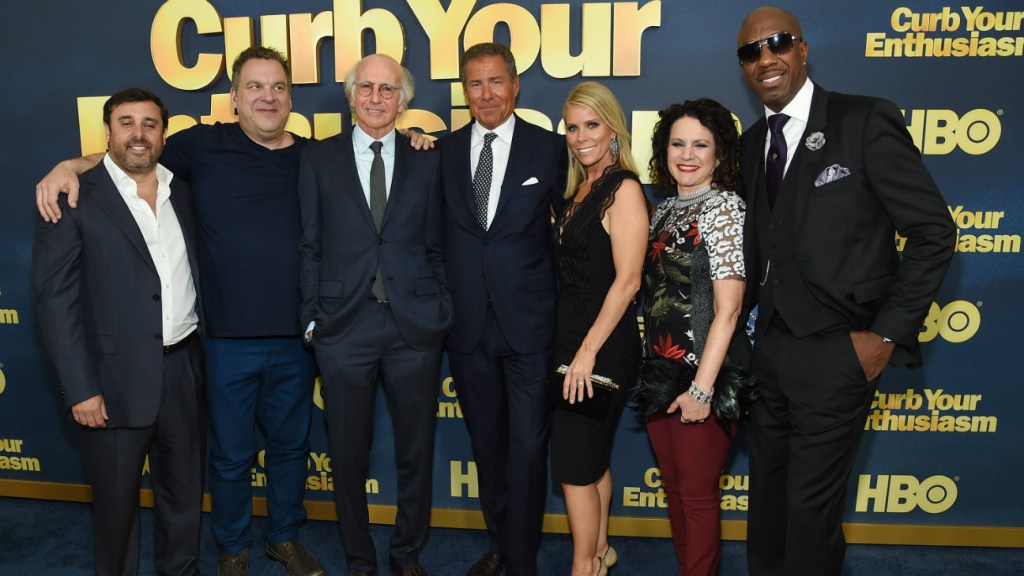 'Curb Your Enthusiasm,' The Early Years: Crazy Auditions and the Art of the Cringe