[Warning: This story contains spoilers from the season-three finale of Fox’s Last Man on Earth.]

Last Man on Earth’s version of the apocalypse has gone nuclear.

In the season-three finale of Will Forte’s Fox comedy, the group brings new life into the world just as they begin to realize new threats to their post-apocalyptic existence.

Just as pregnant Carol (Kristen Schaal) is about to boil over with stress, Gail (Mary Steenburgen) and Todd (Mel Rodriguez) step in to help Erica (Cleopatra Coleman) as she goes into labor with help from Melissa, freshly married and now medicated with a new attitude. But the happy ending doesn’t last long. The group is celebrating the new baby when Tandy (Will Forte) and the group’s new young friend Jasper (Keith Williams) rush in to show them what they guess is a nuclear meltdown.

So the group sets off (again), this time to Los Angeles, where they hope to get on a boat to avoid blowing nuclear reactors and Pat, the crazed man in the hazmat suit they thought was long dead, may be after them. The group finds an acceptable yacht, and as Tandy is giving an overly long toast, Pat (Mark Boone Junior) shows up with a gun. Just as a shot rings out, he falls over, revealing Kristen Wiig’s character Pamela, who was introduced in a stand-alone episode earlier this season.

Forte, the creator and star of Last Man on Earth, was ecstatic to welcome Wiig back to the Last Man family, after a conversation at her Saturday Night Live hosting gig led to a surprise story arc and possible next member to the group.

As to what next season could bring (a Junior-style storyline where Tandy is pregnant too?) Forte has no idea — but he’s hopeful. Fox has yet to renew the show for a fourth season, leaving this season finale as a possible series finale, though Forte really hopes not.

“That would be the worst series finale of all time!” Forte joked. “I’m feeling hopeful about a fourth season, but you just never know. They’ve been so wonderful to let us do three seasons.”

Forte spoke with The Hollywood Reporter about the nuclear path of the show, Wiig’s part in future episodes and who else in the group may be on the chopping block.

So let’s talk about the long-awaited return of Pamela. Was this your plan for her all along?

Well, we would have brought her back much sooner if we could have. I did a small part in Kristen’s monologue when she hosted SNL [in November 2016] and we’re old buddies so we had said the season before, “Hey if you want to do anything on the show let us know,” but she’s super busy. And then after the monologue, she said maybe sometime it’d be really fun to do something on the show. We happened to have this fun idea we all liked that she would be perfect for and she said yes. But this was midway through the season, we had already shot a couple of the episodes that were the beginning of the second chunk of the season and we had written more. So this idea, with the episode focused all on her, was the very last thing we shot this year, so we couldn’t introduce her any sooner, because we had shot so much already. We were barely able to get that episode together in time, so we scrambled. So that’s why she shows up in the very last episode. The season finale, that was the second-to-last one we shot; the last episode, the one that follows her down into the bunker, we shot next. So if we had had this idea earlier and had Kristen been available we probably would have introduced her earlier in the second part of the season.

What are your plans for her going forward?

The plan would be to pick up right where we left off. I would assume that we’re not gonna find a Kristen Wiig look-alike to walk through the yacht doors at the beginning of season four, that is, if we’re lucky enough to get one. We’ll take whatever we can get, we’ll work all that out. This is also the busiest person in the world, so she’s so awesome to have come and done the show as she did, because she’s the best.

Speaking of season four, we still don’t know if the show is renewed for a season or not, so how did you approach concluding the season? What if this ended up being the series finale, too?

Oh man, that would be the worst series finale of all time! [Laughs] No, we had no plan as to that. So yeah we’re hopeful, and who knows? Hopefully it works out so we get to tell the rest of this story. I’m feeling hopeful about a fourth season, but you just never know. They’ve been so wonderful to let us do three seasons. So it’s gravy if we get another one, but I love gravy.

What are your feelings on another season?

I don’t know exactly. We usually leave ourselves with a situation where it’s pretty open-ended, then we deal with it the next year. I feel like if we were to get a season four we do have a little more knowledge of what would happen than past seasons but it’s just little things, where they would go, and stuff with the Pamela character and the births so it’s a little bit more to go on, it’s so nice to have even the tiniest fragment of an idea going into another season. Last season going into season three, we knew nothing. We didn’t even know if it was two men under the hazmat suits? Two women? Kids?

We have a spontaneous working style, so it’s really nice to have this break and go into another season, because we have time to think out what were the things we liked, what we didn’t like. I think we learned some valuable lessons along the way and not every episode will turn out exactly the way you want but what it comes down to is whatever seems the most organic.

What about the big birth scene? Did you go back and forth about how to approach that, or was that always meant to be a happy ending?

A lot went into that. At the beginning you throw out every idea you can think of, like, what if this happens or that? Maybe she dies? We throw out everything, there’s every possibility, we’ve pitched me dying before — it’s usually me pitching it because I’m exhausted — but this just seems like the perfect way to do it. I really love how it turned out, and that birth sequence is so fun to watch. We’ve all, over the years, become this off-camera family and it’s just so fun to see that real love onscreen, too. I’m usually never a “happy ending” person, but this was one time when I was won over pretty quickly. We had to do it, and yeah, we do weird things to our characters all the time, and Lewis came on and died really soon and that was a hard decision to make but it feels like there’s this core group of people that we have on our show that have been so long, there’d have to be a really good reason to break up that group. So yes, this is one happy ending for that birth, then we have Carol’s birth, and then maybe next season it’ll be my birth and then we just follow the Junior plot, they have it all already laid out for us. 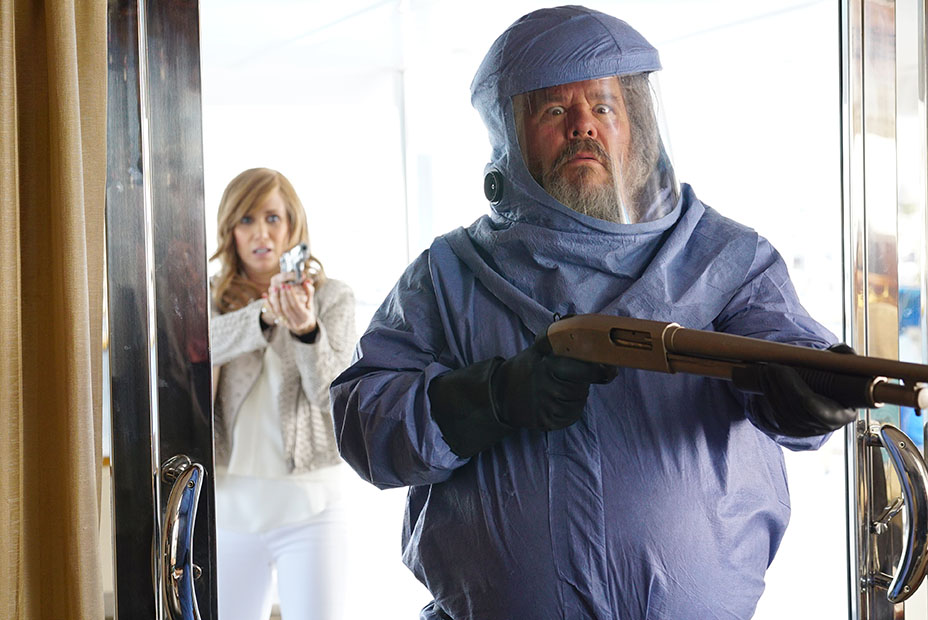 You’ve said that this season especially has focused on the way the world breaks down and how that affects the group, and the finale certainly takes that to a new level. How much has that been a response to the general political climate and how people are feeling right now?

It’s really just a natural extension of the story. At the beginning of the series we read a bunch of books on what would happen in the event that all human civilization is wiped out. The power goes out, and water stops, and pumps in the cities stop working and so the city starts flooding and nuclear power plants were part of it. But whatever is going on in society can bring overall themes to mind that people think about all the time, so it’s easy to read into anything, in terms of politics. If Clinton had won, I think people may have read something different into it.

You also haven’t ignored the political climate, though, with the nod to the presidential succession earlier this season.

Oh yeah! That was just having some fun, our small nod to what people were talking about.

What kind of feedback have you gotten this season? How have the fans, the network reacted to the more serious tone of the show?

We hear stuff from fans, we hear stuff from the network for sure, and we like to pay attention to that stuff but we usually just do what makes us happy. We feel like, OK let’s really make this show for us and hopefully people will appreciate that we’re not trying to please too many people. I mean, it’s good to please the network but you really just have to tell the stories you want to tell and if you try to please other people it ends up starting to water stuff down. Those decisions we have to make are hard, but we usually just err on the side of “what would we want to see?”

Unfortunately, the person making that decision in a lot of cases is a weirdo — it’s me. [Laughs]