Continue to The Hollywood Reporter SKIP AD
You will be redirected back to your article in seconds
Skip to main content
August 8, 2017 7:00am

Laura Dern has played mom to Reese Witherspoon (in Wild) and Shailene Woodley (The Fault in Our Stars), two of her fellow Emmy-nominated actresses from HBO’s limited series Big Little Lies. However, on the show, her character, Renata Klein, a working mother determined to find out who is bullying her child, is a threatening adversary to both.

Dern spoke to THR about why she relished playing a character viewers loved to hate (and then eventually love) and how she has been juggling her busy schedule, one that includes reuniting with David Lynch for Showtime’s Twin Peaks and with Alexander Payne for his upcoming film, Downsizing, as well as a trip to a galaxy far, far away in Disney’s Star Wars: The Last Jedi (both films are out in December).

What’s the most surprising reaction you’ve gotten to your character?

What’s awesome about this limited series format — especially in terms of HBO because you’re not having everything downloaded instantly — is that you’re still in that experience of people waiting week by week to watch the characters unfold. The most fun was the judgment ride people got on about other people’s lives. Like, “Oh, my God, you’re so evil,” “You’re the worst,” “They have the best marriage,” “They’re so sexy together,” and three weeks later everything has shifted. I loved how Jean-Marc [Vallee’s] direction and the writing — by Liane Moriarty, the novelist [of the book on which the series is based], and showrunner David Kelley — allows perception and projection to unfold. For my character, there was a lot of hate — and fun with the hating — but what creeped up on people was an empathy for the fear and the powerlessness of protecting one’s child. All of that was a really delicious ride.

Season two hasn’t been announced, but if it does happen, what would you want to see for Renata?

You’ve taken all those dynamics of this tribe of women who have a lot of resentment and a lot of opinions and different camps they’re members of. And now it’s ended and they’re on the same team and they have the same secret. I find that fascinating. In terms of Renata as a character, I think it’s really moving to consider how powerful women, certainly in America, are placed. I think we’ve seen a lot of that in the past year — politically, emotionally — the labels that are put on women in places of power. Who is she really and what has she had to survive to get where she is, I think, could be a really beautiful ride. 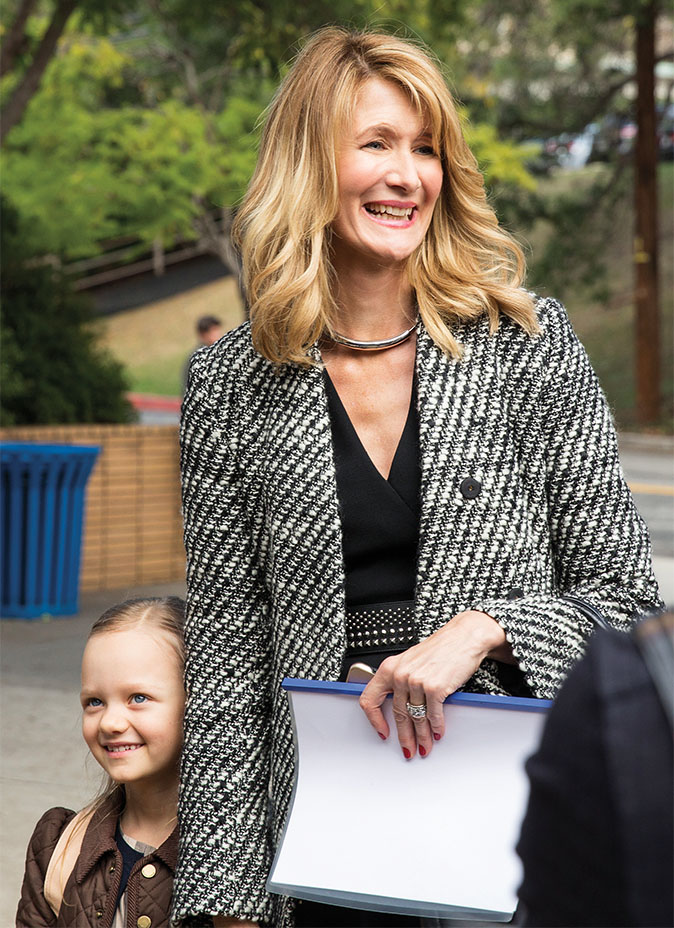 You knew Witherspoon and Woodley from other projects. What did you learn from them while filming Big Little Lies?

Nothing new, frankly. Just a deepness. With Reese, the favorite thing I learned — after doing what we considered was one of the great love stories together [in Wild] — was how much fun it was to hate on each other.

You have so much going on with all your projects. Were you just shooting things back-to-back?

I was. And thanks to both Jean-Marc and HBO, as well as the producers and director of Star Wars, I was juggling those things. They were amazing and really made it possible for me. I also was finishing some of Twin Peaks at the time, so it was a bit crazy.

Was it challenging jumping into such different worlds?

Actors thrive on work and love the art. When you’re on the train, it’s an exciting energy to be part of. It was incredible. It was only my kids that had to be patient.

Fans have had a first look at your character in Star Wars: The Last Jedi. What did it feel like to put that costume on for the first time?

Once in a lifetime. You’re dressed in this amazing creation that everyone put a lot of effort into, you walk on set and the camera starts to roll. You feel like an actor on a movie until you see R2-D2, and you’re like, “Wait a minute, I’m 8 years old, what’s happening? I’m pretending to be in Star Wars, but it’s real.” That’s what sets it apart from any experience I’ve ever had. I’ll never forget it.