“I’m starting to wonder if she’s really the right girl for you.”

These are the words Aubrey Plaza utters as she embarks on her most revealing scene in Legion yet. It’s the climax of “Chapter 6,” the appropriately titled sixth episode of the mind-bending FX series, in the midst of a world that’s still not fully known. Plaza plays Lennie, as she has all season long — except we haven’t really known who or what Lennie is until recently, and we still don’t understand the full scope of this monstrous force who has been living inside of David Haller (Dan Stevens) all this time. But Lennie, covered in black as part of her alternate universe therapist regalia, shines a light on her own true nature as she muses about the meaning of love.

“Do you know what love is? A chemical,” she tells David. “Electrons in your brain, sending signals. Are you familiar with ophiocordyceps unilateralis? It’s a fungus that infects ants. It’s amazing, really. The spores take over their central nervous systems, force them to climb to a high point, and then the fungus begins to grow up — bursting from the tops of their heads like a branch. And it kills them, of course, all so it can spray new spores all over the jungle, infecting more ants. When people say love, that’s what I think of.”

It’s a revealing scene on a number of levels, from Lennie confronting David with her true form and purpose, right before boxing his consciousness and presumably taking over his human husk. Think it was hard for the viewer to follow? Try living in Plaza’s shoes for the scene.

“That was probably the most difficult scene of the series for me,” she tells The Hollywood Reporter. “Essentially, I’m playing four different characters in one scene — or at least that’s how it was in my head. This scene is kind of the big reveal. You’ve seen drug addict Lennie. You’ve seen overalls Lennie appearing as these hallucinations. You’ve seen Lennie in a suit that’s kind of this crazy Beetlejuice character who has some other agendas. You’ve seen therapist Lennie. So that scene was very complicated for me, and it was really fun and really challenging. It’s Lennie’s biggest moment in the series.”

It’s also a moment that Plaza was anticipating since her earliest involvement in the series. Originally, series creator Noah Hawley wrote the role of David’s sometimes imaginary and sometimes way-too-real companion Lennie as a man. Somewhere along the way, after Plaza had already read the pilot script for Legion and set a meeting with Hawley, the role changed.

“I didn’t read the script with that character in mind, so it was a surprise to me,” she says. “We had coffee and we discussed the idea, and he let me in on some of the highlights of Lennie’s journey through the series.”

Among the revelations: the fact that Lennie is the nightmare fuel coursing through David’s veins and brain, the one and only wicked entity known as the Devil with the Yellow Eyes. In reality, the practical version of that strangely bloated monster is played by Quinton Boisclair, and even laying eyes on the man was a bit much for Plaza.

“Honestly, it was kind of terrifying,” she says. “The actor that plays the Devil with the Yellow Eyes is this really, really tall dude. He looks terrifying. Just seeing him on set, I had a hard time looking at it. It’s really the stuff of childhood nightmares — I think that’s what Noah was going for, and he succeeded.”

What was a nightmare for David Haller was a “dream come true” for Plaza, especially when it comes to “Chapter 6,” which takes place almost entirely in what appears to be an entirely new plane of existence: some sort of alternate reality where the Summerland mutants are now inhabitants of the Clockworks mental hospital, with Lennie running the asylum.

“I think the idea of this episode and of Lennie’s role is to commit to the reality of what we’re seeing,” says Plaza, explaining her interpretation of what’s potentially the most unusual episode yet in this highly unusual series. “Instead of playing it as this evil, tricky villainous character, I just wanted to be a therapist, and really be in those sessions with those characters and really commit to that reality. For the show, I think it’s more interesting — and confusing — for the audience to not know what’s real, if this is the present, or if it’s some kind of crazy fantasy.”

It’s all too real for David Haller at the end of the episode. Moments after he listens to Lennie’s colorful love-as-fungus analogy, David watches the demonic therapist take on an even bigger target.

“What is the point of life? All of you running around trying to be, what, happy? Fulfilled?” she asks, before rising from her seat, stalking toward David. “I’ll say this: There’s only one being in the vast multiplicity of space that matters: God. Do you know why God matters?”

With that, and with one stretch of the leg, Lennie demonstrates exactly why she believes God matters: “Power. That is the point of what you call life. The only point. Power.” 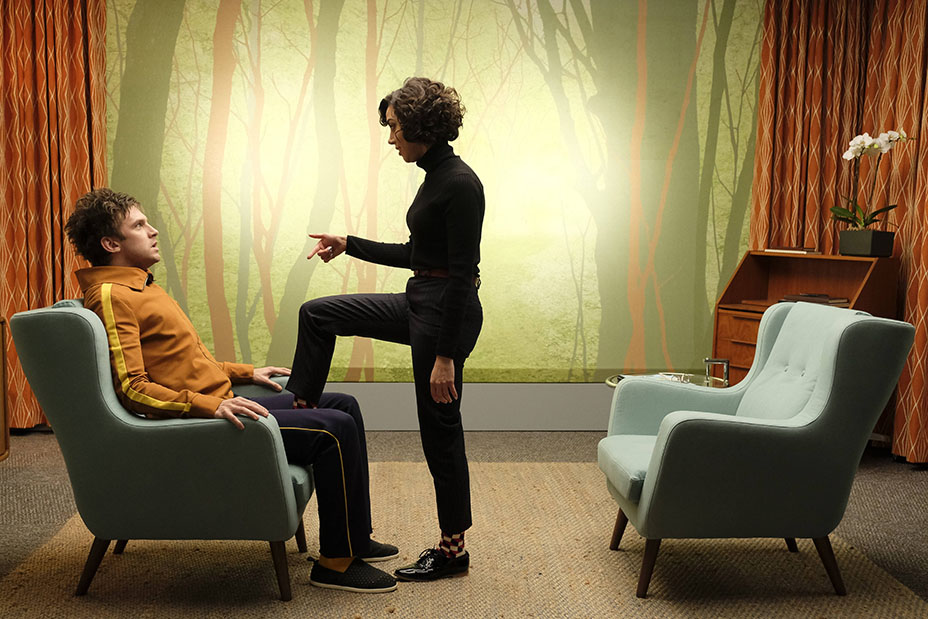 It’s an evocative image, one that owes thanks to the trust established between Plaza and Stevens over the course of their time shooting Legion together.

“He’s really up for diving off the deep end with his partner,” she says of the Legion leading man. “For me, that’s always what I’m looking for. I think we recognized that in each other early on. We worked really hard. We rehearsed a lot. We would live as those characters in a way together. We were all up in Vancouver, dealing with these insane and confusing scripts where we didn’t know what was happening half of the time. We only had each other to lean on and I think in a way that energy and confusing, trippy ride we were on, it was all kind of helpful because we were able to use it and make choices we otherwise wouldn’t have made.”

The therapist sessions and the showdown with David aren’t even Plaza’s only big swings of the episode. A quarter of the way through the hour, Lennie breaks away from her office desk and embarks on a dance number set to a Bassnectar remix of Nina Simone’s “Feeling Good.” Lennie’s silhouette dances across red and black backgrounds, before the flesh-and-blood version of the character swings through hospital rooms, shreds pillows to pieces, and eventually calmly resumes her work. Plaza says there was “a very minimal description in the script for that sequence,” boiling down to a single sentence.

“It went something like: ‘Lennie dances with malevolent joy — a dance of the wild things,'” she remembers. “It was something like that; I don’t want to quote Noah exactly there, because I’m not sure. But it was a very descriptive sentence, and I just took that and ran with it. I came up with a mini music video in the middle of the show. I knew what the song was and I knew the sets I was going to be on, and I just worked with a choreographer and tried to let loose.”

Given the level of specificity in play on Legion, it’s somewhat surprising that Plaza had so much creative control over such an elaborate sequence — at least it’s surprising on first glance. Plaza says that one of the greatest joys of working with Hawley comes down to one of the key lyrics belted out during the dance number: freedom.

“He’s so specific, but he’s also a great collaborator,” says Plaza. “He’s very open to ideas and discussions with actors. I think that, for me, is what ultimately makes people great and not just good: people who allow other ideas to seep in and let things evolve. We found really early on that we liked working together, because he would write something weird and I would add another weirder thing and we would just build off of each other.”

Given how technically and narratively complicated the series is, and Plaza’s intense commitment to the role, it’s worth wondering: just how much of Lennie does Plaza take home with her? Did the character wiggle her way into Plaza’s brain, much as Lennie has seemingly done to David? Is it a difficult entity to shake? Plaza admits that while she didn’t pay homage to Lennie by sleeping out on the streets (“At least not every night,” she’s quick to add), the character was definitely along for the ride — if not quite as drastically as ophiocordyceps unilateralis.

“Without sounding pretentious or something, I would say that with anything I’m doing, I take it home with me. I have a hard time separating that,” she says. “I take whatever I’m doing very seriously. It’s very personal to me. It takes a while to shake off.”

What do you think of Plaza’s work as Lennie on Legion, and in this week’s episode in particular? Keep checking THR.com/Legion all season long for interviews and news about the FX series.