It’s some use crying over spilled Loudermilk, the shared last name of two of the more quietly fascinating characters on FX’s Legion. In one corner, there’s Cary (Bill Irwin), the brilliant man who co-founded the mutant haven known as Summerland. Within that same corner, there’s Kerry (Amber Midthunder), the young warrior who literally lives inside of Cary’s body, and only ages when she’s out on her own — hence the age discrepancy between Cary and Kerry.

“He does the boring stuff — eating, sleeping, whatever it is you guys do in the bathroom — and I get all the action,” Kerry tells Syd Barrett (Rachel Keller) of her relationship with Cary. “He makes me laugh, I keep him safe. If that’s weird, I’m OK with it.”

Cary has his own outlook: “Here I am, getting old. What happens to her when I die?”

Perhaps Cary should worry more about what happens when she dies. In “Chapter 4,” Melanie Bird (Jean Smart) sends Kerry to join Syd and Ptonomy (Jeremie Harris) on a mission to corroborate David Haller’s (Dan Stevens) story. The mission goes awry when they run into The Eye (Mackenzie Gray), who fires a bullet in David’s direction — only for Kerry to step in the way. Back at Summerland, it’s as if Cary feels the bullet piercing through his own flesh, the episode ending with both of the Loudermilks spilled out on the ground.

THR spoke with Irwin to learn more about the story with Cary and Kerry, the revelations contained in the episode and the conversation that started it all.

Noah Hawley has said that he specifically sought you out for the role of Cary Loudermilk. What was your first meeting like?

Noah and I sat down, we ordered breakfast, and he started talking about a character who, to his surprise, had another being inside of him. He didn’t mention FX. He didn’t mention Marvel. He didn’t mention X-Men. He went straight to this notion of a guy my age who shared his body with a young gorgeous warrior of another gender. That was our breakfast conversation.

That’s a heck of a breakfast. How did you react to the idea of the character?

When you’re in Noah’s presence, your reaction is generally going to be, “Yeah, when can we do this? Because I’m not sure I’m following what you’re saying, Noah Hawley, but I want to work with you on it. I want to be a part of it.” Things transpire, and you find yourself in Canada working with a cast of people — in this case an incredible cast of people — and there’s lots of embargo on what you’re not allowed to talk about, and suddenly, you can talk about it now. And good luck! Because it’s not easy.

It’s a complicated show! Even with the toothpaste out of the tube to an extent, it’s difficult to discuss.

It is, yes. That is a good image. We’re eager, the way we were eager when the scripts would come in and we would read them over several times with each other. Now we’re eager to see these episodes come out, because the story is unfolding for us too to a certain extent.

In this episode, we learn more about the relationship between Cary and Kerry. We learn that she has been living inside of him since they were both young, and that she doesn’t mind the arrangement since she gets to have all the action. What’s Cary’s view of Kerry?

It’s much more parental, although we’re not father-daughter. But that mythos is in there somewhere. I’m concerned that she gets the sustenance she needs. We need to be locked together inside of each other for sustenance to happen. When she’s out doing warrior duty, which she’s eager to do, like any youngster who’s eager to go out and do her thing, pop — which on some level, I feel like a father figure — is concerned that she’s OK and coming back OK. You know what’s great? At the premiere last month, I met her father, David Midthunder (Longmire).

How did that go?

It had a sort of profound ring to it! He’s an incredible cat. He’s a wonderful man. He’s a terrific actor. We talked surfing. He’s quite a bit my junior, but we’re still not of Amber’s generation. It was a great touchstone to get to meet him. He’s a very charismatic man.

You bring up Cary’s parental perspective on Kerry, but since they grew up together, is there a sibling dynamic as well?

Exactly. It’s father-daughter, but it’s also brother-sister. Noah has the time relation working in his head and if he were on the phone, he could explain it. I sort of have a sense of it. We have aged at different rates because she only ages when she’s out in the world. Needless to say, we have a couple of generations between us. I still marvel at this notion, even as I’m talking about it a year and change from when he first tried it out on me. 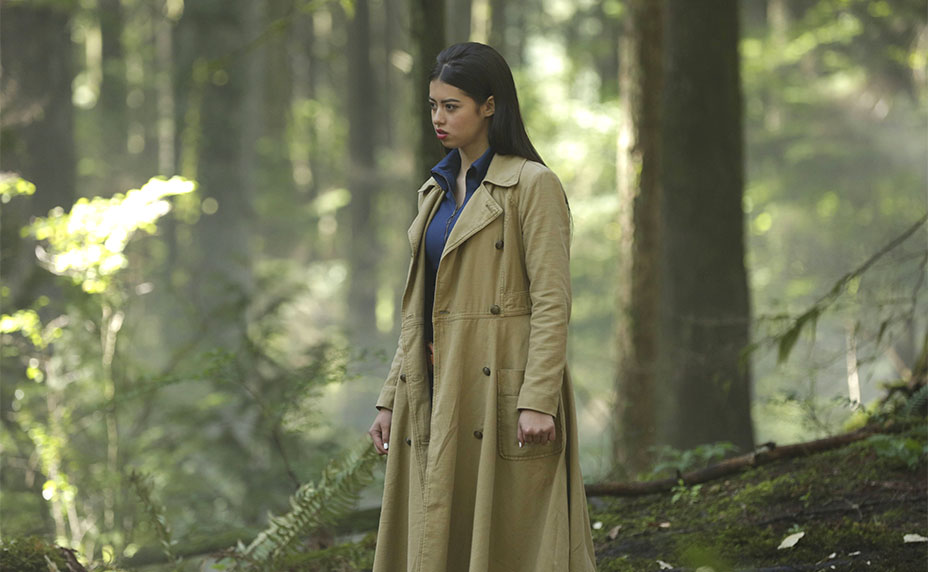 It’s interesting: Cary and Kerry share a body, Syd can swap bodies with anybody she touches, Ptonomy can access people’s memories … the notions of identity and who we are seem to be the cornerstone of the powers seen on this show.

Yes. Yes, it’s really interesting. Human beings have always hankered after power. It’s one of the reasons why these stories are so powerful to us. We want to be able to fly. We want to be able to sear somebody with lightning from across the room. Those are primal desires, to shoot somebody with energy. But Noah has found all of these other explorations of the word ‘power.’ The power to plum your own memory, to return to your childhood, and they are all mythic in their own way. The power to sustain another body inside you. You’ll notice he didn’t make me a female character, either; it’s not about birth and womb strength, it’s a different deal.

Cary and Kerry separate in this episode, with Kerry finally running into some action. Unfortunately, it doesn’t work out so well.

It was an exciting time with Larysa Kondracki, the director of this episode. We talked about what each of these moments of apprehension represents. But television moves so fast. As soon as we shot the scene where Jean Smart’s character sends these guys out, as soon as I realized I missed an opportunity, I was almost in mourning for the rest of the episode. I kept asking Larysa if we could go back, because when Melanie Bird says: “I’m going to send you out, Kerry.” I wish I had been able to register the parental anguish or the brotherly anguish or the familial anguish of “Oh, no, she’s going out?” I think my character had to have thought about it. When you flex with your muscles, it doesn’t always work out as well as you think it’s going to. That’s what happens in this episode.

Can you talk through your side of the Cary-Kerry action scene? It’s almost a dance number for you. It also looks like Cary’s lab is outfitted with defensive posts, just for occasions like this.

Yeah. The mythos seems to be that they feel each other’s experience when they’re separate as well as together. There’s this notion of, “Gee, I better sweep up the lab here, and I better keep an eye on David Haller, who’s putting us through all of this.” I love the notion that Cary Loudermilk is fascinated with David’s powers and comes to really deeply connect with him and care for him. But at the top of the story? He’s not sure he’s worth all this trouble. So I have to keep an eye on him. Meanwhile, I’m getting flashes of apprehension of what is happening with her out in the world, where she’s battling literally the forces of black — literally, dressed in dark. Some of the most incredible stunt players I have ever worked with, by the way. Anywhere in the states and anywhere in the world. This group of men and women. Amber had a stunt double and the two of them were just incredible to see standing next to one another. It’s one of the most exciting things. You don’t usually hear an actor saying, “I showed up when I wasn’t called.” But I did, frequently, to see how it would all play out. I needed to see how it got put together. And I was experiencing it at some remove back in my lab. Of course you shoot lots of stuff and in your mind you think each moment is intricately connected to some other moment out in the other story, but the story pressure is so great, the way Noah tells the story, that only little bits of it can be used. It’s very mosaic like.

This episode was the debut for Jemaine Clement as Oliver Bird, who co-founded Summerland alongside Cary. What are Cary’s views of Oliver now that he’s somewhat back in the mix?

This is something I told Michael Uppendahl, who directed some of the episodes in this first season and is kind of Noah’s eyes and ears on site when Noah can’t be in production. I said that I think Cary is warmly bonded with Jemaine’s characters, but has conflicted feelings about him being back [in the equation], because he’s kind of a swinging dick. Now it’s a more complicated male scene now that Cary might have to share his world again with Jemaine’s character.

Let us know your take on this week’s episode in the comments below, and keep checking THR.com/Legion for more on the show.