In the premiere episode of MTV’s new unscripted series Lindsay Lohan’s Beach Club, the titular star offers a stern warning while speaking about the inevitable drama that comes along with hiring 10 gorgeous — and troublemaking — millennials to work for her at Lohan Beach House, her recently established day club on the Greek island of Mykonos.

“The second you become emotional, I’m going to become [Vladimir] Putin,” Lohan tells her business partner and co-star, Panos Spentzos. “I have no emotion when it comes to money and business.”

Chatting with The Hollywood Reporter at the New York premiere party for the series, held Monday at Manhattan’s Moxy hotel, Lohan admitted that comparing herself to Russia’s notoriously unfeeling ruler may have been a stretch.

“I don’t know what I meant by that!” she said with a laugh, assuring that she is “caring and nurturing” to her employees. But after a myriad of headline-making setbacks that occurred over the course of a decade — several stints in rehab, multiple arrests, court hearings and jail time, which ultimately stalled her once-promising acting career — Lohan, 32, won’t tolerate any more conflict in her life. “I’ve learned a lot. And I don’t take any shit these days. That’s for sure.”

The onetime tabloid fixture and paparazzi magnet said that she has never felt more confident in herself — and “at peace, to be quite honest,” she noted — after fleeing both Los Angeles and New York for Europe and then Dubai, her current home, where she has cemented herself as an international entrepreneur. The “Bossy” singer opened up her successful Lohan Nightclub in Athens, Greece, in October 2016 before setting up shop in Mykonos with its daytime counterpart this summer. She owns a third club in nearby Rhodes.

“I used to get judged for going out to nightclubs,” said Lohan, who made her reality TV debut in 2014 with the help of Oprah Winfrey on OWN’s Lindsay, which followed her rocky road to redemption as she attempted a comeback in the U.S. “But now I’m a club owner and that’s what this show is all about. It’s amazing because what else can you say at this point? It’s a new chapter for me.”

Below, the fiery redhead talks more with THR about reinventing herself, overcoming trauma and her wish to make movies again — which, amid Hollywood’s seemingly never-ending revival frenzy, includes Lohan’s hope for a Mean Girls sequel.

Why did opening up Lohan Beach House and documenting that experience for MTV feel like the perfect next step in your career?

The club was just opening, and it was going really well. And I really wanted to share that with other people. I just felt that the time was right. And it’s great for the club as well. Well, I mean we’ll see after all the episodes! The club does well on its own, but this show will definitely add a kick I think.

In the premiere episode, you talk openly about your experience with domestic abuse. You opened the day club on the very same beach where you were physically assaulted by your ex-fiance, Egor Tarabasov, in 2016. Why did you decide to be so vulnerable?

How did your time working in Hollywood set you up for Lindsay Lohan’s Beach Club?

Having been a child star, I developed a very strong work ethic at a young age. I’m still very hard-working. Especially with this show, it’s really great because there’s nothing I don’t know about being on a set. But, more so, I’ve been studying people for a long time and I’m a very good judge of character. That’s been very helpful.

Were you ever concerned that your employees might be using your show as a vehicle for their own fame?

Yes, I definitely thought that. That was a big concern, but also, why wouldn’t they? They’re on MTV, they’re doing reality television. There can’t be a double standard and I have to take the fact that they might be looking for fame into consideration, or take into consideration that they want the attention. 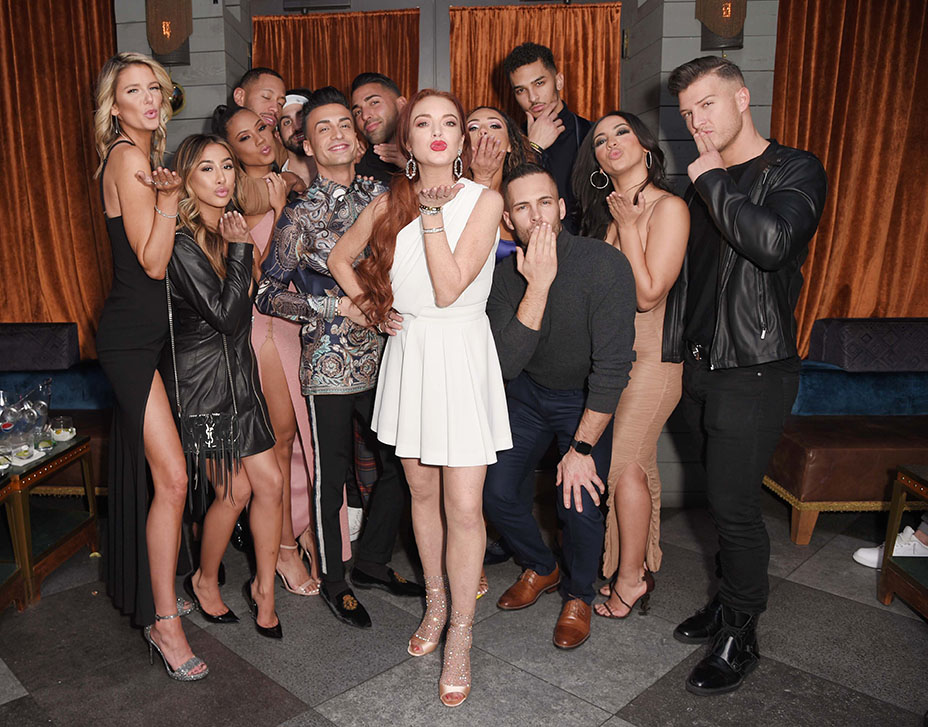 What’s your advice for them when it comes to handling fame?

They’ve just got to slow down and take time for themselves. Don’t just plow through it. Pace yourself. Sometimes less is more.

What do you think the younger versions of yourself — the Lindsay in Parent Trap, the Lindsay in Mean Girls — would think of this new phase in your career: business and reality television?

I always loved working in business and being behind the camera as well. And I like working with people, obviously. So, I think they’d be proud of me. I’m really proud of myself.

What’s next for you on the acting front?

I bought the rights to the book The Honeymoon. Actually, when I went to Mykonos for the first time, I was reading it. And the writer, Tina Seskis, contacted me. And I immediately asked her, “Can I buy your book?” She told me, “I’m just about to sell it.” I was like, “I’m outbidding everyone. I want the book!” So, I did. I bought it and we are working on the script together. She’s a lovely woman.

Why was it so important for you to get your hands on the rights to The Honeymoon?

The story is about a girl who’s in a relationship that’s a bit tumultuous and she finds her way through it. And I related to it at the time.

Lindsay Lohan’s Beach Club is now your second reality show after your series with Oprah. How did that experience prep you for your work with MTV?

It didn’t. It’s so different when you have cameras around editing your life second-by-second. That experience was weird to me and having that kind of focus on my personal life will always feel weird. With this show, it’s different because the cameras are flipped more. I’m directing the situation. A lot of my employees, these VIP ambassadors, who work for me and who work for the club are very unpredictable. But I’m Irish Italian with a very strong temper, so they better watch out.

Do you and Oprah still keep in touch?

I talk to her. I actually invited Oprah to come to the beach club next summer, so let’s see if she bites. I would love to have her come and see it. It would really mean a lot to me.

Maybe we can expect an Oprah cameo on season two?

I don’t know if I would ask her to do that! [Laughs.] But I would like her to just come out and see it. It would be a lot of fun.

Are you hoping this series does extend beyond one season?

Yes, of course. I have a lot of ideas already for season two. My mind never stops going. I’m always thinking about new things. New businesses, for sure. New cities to conquer, but I can’t give everything away just yet.

Lastly, is there any update on bringing Mean Girls back to life?

I’ve said it a million times by now, but I would absolutely love to get back together with everyone from Mean Girls. But we would need the whole cast. It’s really in the hands of Tina Fey and Lorne Michaels, but anything is possible. What’s great is that Jonathan Bennett [who played heartthrob Aaron Samuels in the 2004 film] is hosting the aftershow for my show on MTV. There’s always going to be that bond between all of us.