The story of John P. O’Neill was one that Jeff Daniels admittedly did not know. Similar to most of the audience who tuned into Hulu’s The Looming Tower on Wednesday, the FBI legend who died in 9/11 was a new character to Daniels when he took the part.

“His partner said he ‘gulped’ life, so I gulped life,” Daniels tells The Hollywood Reporter of how he approached portraying the larger-than-life tragic figure. Without much public material to source from, Daniels met with O’Neill’s former partners and mainly relied on the late agent’s protege, former FBI agent Ali Soufan, a key person in bringing the story of The Looming Tower to the screen.

O’Neill’s pivotal role in the pursuit of Osama bin Laden has been meticulously told in the 2006 Pulitzer Prize-winning book of the same name by Lawrence Wright, who is an exec producer on the limited series. Wright came upon O’Neill’s story when sifting through obituaries in the days after 9/11: After a 25-year career in the bureau, which included running New York City’s counter-terrorism unit, O’Neill became head of security at the World Trade Center one month before the attack.

The 10-episode series will trace O’Neill and Soufan’s hunt for bin Laden on the FBI side, beginning in 1998 and ending with the Sept. 11, 2001, attacks. The story highlights the inner battle between the FBI and the CIA, the latter led by Peter Sarsgaard, and the mistakes that resulted from top-level miscommunication between the two government agencies.

Below, in a chat with THR, Daniels explains how he went about piecing together O’Neill in order to portray him onscreen and why today’s government, from the White House down, should pay attention: “Look what happened when we did have truly the best and the brightest.”

John P. O’Neill is the man most associated with the pursuit of Osama bin Laden. But to this audience, he’s a new character — especially to those who haven’t read Lawrence Wright’s book.

I’m one of them. I think I’m probably the perfect audience for that, in that way of saying, “What? Wait, what happened?” after hearing the story. I didn’t know about Larry’s book, I didn’t know about John O’Neill. And then when you do find out, you go, “What happened?” It’s a great hook. It’s a tragic story in O’Neill’s case, but it’s a great story that I knew nothing about. You think you know 9/11, but you don’t.

How did you go about piecing together the character of John O’Neill?

You go to grad school and you major in John O’Neill. You read the book [The Looming Tower], you sit down with Ali Soufan (played by Tahar Rahim) and you sit down with two of John’s partners. Those guys give you the strengths and the weaknesses, and the stories and anecdotes. It’s a complete education on what they felt their partner, whom they loved, was made of.

The first episode only scratches the surface on the complexities of John. How do you describe him?

He was a complicated guy. I think doing [Netflix’s Western miniseries] Godless helped me with O’Neill because creator Scott Frank and I decided for my outlaw character in Godless: Let’s not understand what he’s got. Let’s not say, “Frank Griffin is bipolar or schizophrenic, or some kind of paranoid.” He doesn’t know; he’s going around the Wild West and all he is is mentally ill. He would just chase that next thought, whatever that is. And O’Neill was similar in that way where he couldn’t sit down and tell you, “Well, this is what I’m dealing with and I met with my shrink. ..” — no. John is out until 4 a.m. with girlfriend No. 3 and showing up at 7 a.m. to work and clearing a desk because they won’t take his worries about bin Laden seriously. You see where the script leads you; you don’t have to make sense of it, because I don’t think John did. He just said, “Tonight I’m in a bar until 2 a.m., dancing with four women over a table. And the next night I’m on a plane to Yemen to deal with the USS Cole [bombing].” He was all over the place. Life pulled him.

What do you think it was that he was constantly chasing?

I don’t think he knew what it was. The joy of playing O’Neill is that he doesn’t know what’s going to happen tomorrow. So even though everyone watching knows what happens, he doesn’t. The way he went about trying to get people to do what he wanted didn’t work. He turned tables over, cleared desks, screamed at people he knew. And I think by the time the FBI pushed him out, which he didn’t want, I just made the choice that the guy was going to start to refocus and maybe change. He was going to make the best of it, even though his true love was the FBI. I played that he was just going to start changing for the better in the third act of his life, and then 9/11 happened.

Did anything surprise you in your research when you found out what U.S. mistakes were made, with the miscommunication between the FBI and the CIA especially?

Hindsight is 20/20 and all of that, but I looked at it more that the CIA and the FBI have different ways of going about the same thing, and they will fight tooth and nail. Now, you throw in the approach that O’Neill used, which was belligerent and confrontational. He has not a political bone in his body and he’s going down to Washington in the sea of politics. Then add on, “And I don’t like this guy [played by Peter Sarsgaard, on the CIA side].” Now you’ve got a divided-we-fail kind of thing, which is two organizations both doing what they thought was right in different ways, but they were divided — and that hurt us. 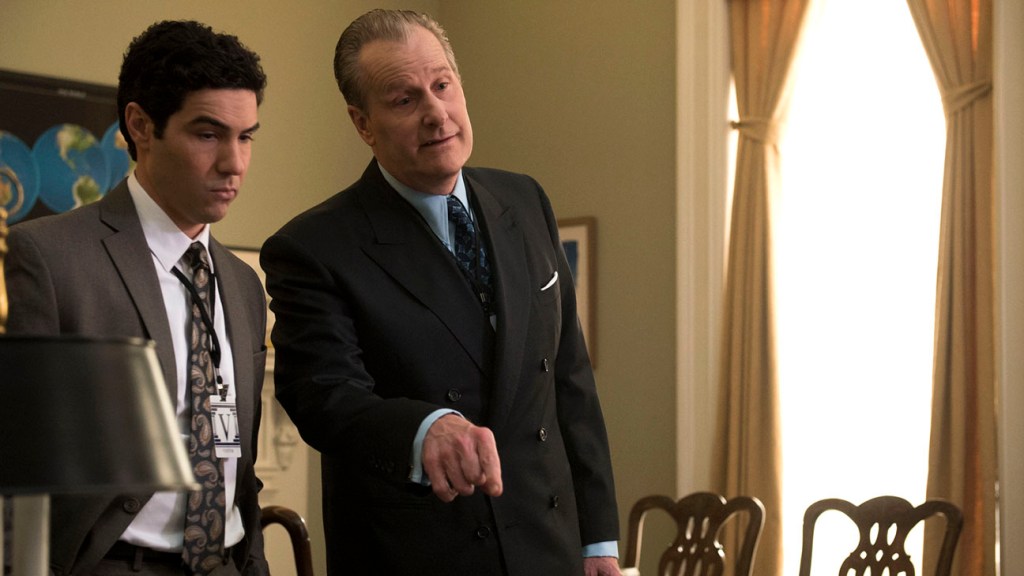 You all met with former FBI agents, and some former CIA agents, when prepping the series. After speaking with them, do you believe these are mistakes the government has learned from?

Well, I would say just sitting here today as an American citizen, regardless of who was in power back then — late ‘90s leading up to 2001 — the government was fully staffed with brilliant, knowledgeable, experienced, competent people. Are we now, today? Are we fully staffed? When you go into the White House and start working your way down, you can take out brilliant, you can take out knowledgeable, you can take out experienced, you can take out competent. And we’re more divided than ever. It doesn’t look like we’ve learned a damn thing. It doesn’t mean there aren’t good people, there are. But they’re outnumbered, I think, at the top. And that concerns me. Look what happened when we did have truly the best and the brightest. We had that, and 9/11 happened.

Do you think this series will get people asking these questions and revisiting 9/11 through a new lens?

Maybe. That’s what’s interesting from doing anything, particularly something like this: You want to hear how it affects people. We have no idea. We hope it will. But it’s not ours. That’s one of the great things about doing something; once you release it, it’s no longer yours. It’s theirs to do with it what they choose to do with it. The early reaction will be that we’re pulling people into the story in a way that they didn’t think they would be. That’s all we know. It will be interesting to see further reaction.

Lawrence Wright has said John’s family was not very involved. Did you have any interaction with them about the portrayal?

I didn’t go to them. There’s a respect for the family where I didn’t want to impose myself on them — if I’m not getting a greenlight to go in there, then out of respect for them, I’m not going to. The family that I did pay attention to was Ali Soufan. Brothers, in a way. He became the most important critic for me. You can’t do an impression of John O’Neill because there isn’t enough video or whatever to go from. But you can get how he thinks and you can get why he’s doing what he’s doing in a scene, based on what Ali Soufan told me, and the partners. That’s all I needed. I told them that I think John is a hero in his own way. Ali Soufan saw it and was very supportive. He said, “You made it your own, and I think John would be very happy with that.” So, I’ll take that. It’s tricky because he meant a lot to Ali and he meant a lot to his partners, and you want them to not see a direct impression but to go, “Yes, that felt like John.” That’s all you are going for as an actor.

There is a responsibility that comes with telling a 9/11 story, and you had this other responsibility of playing John. What was that like to shoulder?

You boil it down, you keep it simple. “I want you to know about this guy bin Laden; what do you mean you won’t listen to me?” It’s a pretty simple thing to play. The personal life gets complicated. He’s chasing something. You just make all these actor choices that support the complexity, instead of trying to simplify the complexity. That’s far more interesting to play, all these colors and someone that is searching for something. And that’s what I chose to do with it, because that’s what it felt like from the material and the discussion: Is that guy looking for something?

How much will the series show of John’s last moments?

I haven’t seen the finale, but it’s the morning of 9/11. We shot some stuff of him walking to work, him going into the building, him going up the elevators. I know what we shot and it’s the going in. And then once it happens, it’s everyone else: “Where’s John? Where’’s John? Here’s a message on a voicemail at [his girlfriend’s] apartment, ‘Where’s John? Where’s John?'” No John.

You have spoken about imagining all of the characters you have played being at a party together. How does John fit in with that group?

He takes over the room and then [Newsroom‘s] Will McAvoy says, “Who the hell is that guy? I’ve never heard of him.” And then [Dumb and Dumber‘s] Harry Dunne walks up and says (in Harry voice), “Hi, Harry Dunne! Are you, like, an FBI guy?” Today, maybe I could do that. Maybe you could shoot your own thing where all your characters come in and there are split screens and over-your-shoulders.