With the help of a bald cap, belly pad and prosthetic jowls, Oscar winner Russell Crowe transformed into the late Fox News founder Roger Ailes at the center of Showtime’s celebrated series The Loudest Voice. During a seven-episode run in spring 2019, the project, based on Gabriel Sherman’s 2014 book, dramatized the media titan’s rise and fall, with Ailes ultimately brought down amid a flurry of sexual misconduct allegations. From his home in Australia, Crowe reflects on his initial resistance, his 68 times in the makeup chair and why he wasn’t willing to play Ailes as simply a monster.

Let’s start easy: How are you?

It turns out I’ve been self-isolating on and off for the past 30 years, and I’m pretty good at it. (Laughs.) I’ve actually found it to be very productive; it’s given me reflective time, but also creative time, time to write songs and write scripts and work on productions in the future. I was starting to feel like I had this life where I was dragging a whole bunch of tin cans and loose tile parts behind me. So in a way, being still for a while, I’ve actually been able to just go through a list and check things off.

When I last spoke to you, on the set of The Loudest Voice, I asked about the weight of playing a character like Roger Ailes, particularly as you portray his misconduct. You said you wouldn’t fully feel it until after the fact. So, here we are: After the fact, what was the weight of it?

Some of what I meant by that is that there’s a safety mechanism in my brain, which hides from me some of the deeper responsibilities of the character. So they only become apparent to me when I’m actually on the job. It quite often happens if nudity is mentioned, for example. My brain will just put aside the fact that there’s this really uncomfortable sex scene that I have to be doing, probably coming through week three or four in the schedule, and so the day before it arrives, I’m like, “Oh my God. Oh, that’s right. We have to do that. Ah.” (Laughs.) Part of it is a self-protection mechanism, but you also have to really be inside a character like Roger in order to be able to do it, because you need to be able to discover the shit you need in the moment. 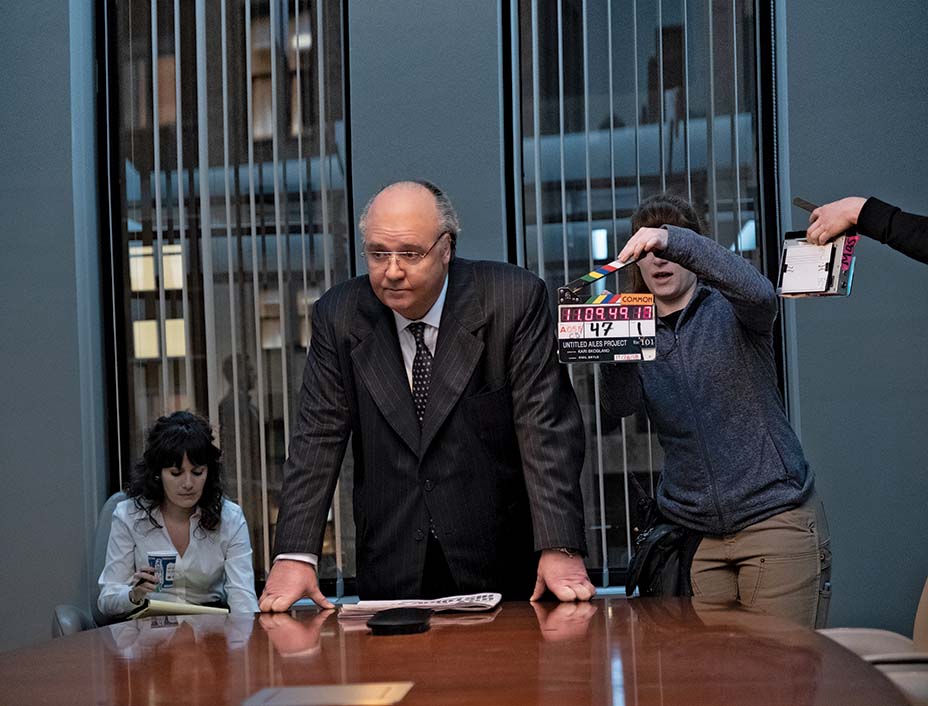 And once you were done?

Mannerisms may stay with you for a bit, but you’ve got a strange function as an actor, because you’ve got a whole series of filing cabinets that you fill with information that you need now, and then you dump that shit. The moment that guy says, “That’s a wrap for number one [on the call sheet],” you’re out that door and you’re already shedding all of those speeches and the information and the backstory. You just get rid of it, and it kind of rises off you like a wave. And when you wrap up Roger, it’s not just the weight of the dialogue and stuff; it’s also the fact that you’ve been sitting in that makeup chair every day and doing that transition, which requires you to get to a very, very Zen place. And I’ve seen actors before who’ve agreed to the responsibility to do makeup and they let it start to affect them psychologically. They find that they can’t function for a period because they’re so over sitting still and getting their makeup. I’ve been doing this a long time, I know the responsibility.

That transformation process was one I got to witness, and it seemed to take a lot out of you.

I think it was 68 applications. The first test I looked like Danny DeVito’s older, long-lost brother. I didn’t look like Roger Ailes at all, and it was like a six-hour process. But what it showed me was how much deeper we have to go into this to achieve him. And this whole journey of Roger is his photograph. We’ve got images of him and Rupert Murdoch announcing Fox, so we know what he looked like, we know what he dressed like, we know what color watch he had, we know where his suits got made, for God’s sake. All that information is available to us. So you have to go, “Well, fuck it, man, that’s the task.” I’ve got to look like this dude from day one. I’ve got to accept the fact that this six months of my life is going to be plagued by however many times I’ve got to do this every goddamn week. (Laughs.)

How did that makeup inform your performance?

Well, if I’m that guy, everything I do from then on is driven from inside, but I’m confident that the pirate looks like a pirate. The dude with the eye patch and the parrot on his shoulder, that’s the pirate. Once that’s there, it frees you up. You don’t want to think about any of that external stuff anymore, because you want to just drive everything else internally. The greatest hangover, really, of the job was that the next job was so fucking easy. I’m turning up, and I’m a dude who’s just climbed Mount Everest seven times, and now you’re asking me to go for a hike in the Hollywood Hills? I’m like, “Sweet, bro. Let’s do it.” (Laughs.) 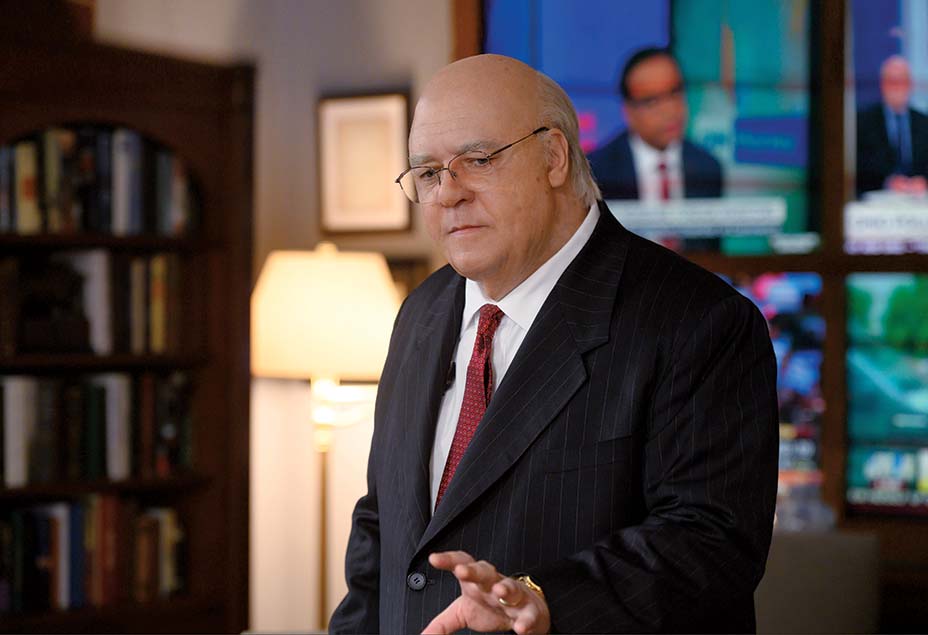 I assume the next one is the film, Unhinged?

Yes, and it was a whole bunch of driving stuff and car accidents, playing a really, really dark character completely lacking in humanity. And look, I got a different hairdo, I’ve colored my beard, I’ve changed all these other things, but my engine was used to revving way higher, so that just felt really easy.

You would think you’d want to play some exceedingly light character after half a year as Roger Ailes.

But the thing with Roger is his darkness had to be wrapped in a believable charm. There’s no way he accomplishes everything he accomplishes by himself. Network news, by definition, is a team sport, and you got to see why people followed what he was saying. When you would talk to those people, and I did, their first and foremost thoughts were of fondness of how exciting it was to be around Roger, how his energy was infectious, how they felt like they were on the winning team. So, you can have a cut-and-dry attitude toward Roger and put his sins in a list and say, “What a horrible person. What a monster.” You can come up with all these other accusations and phrases, but we’re never going to understand any of this shit if we don’t realize the guy was a human and he was warm-blooded and he was a father, a husband, a friend and an adviser, and he created careers and gave people longevity in the business. He’s all those other things as well. And that complexity is why it was fun to do.

Initially, this was not a role you were keen to take on. Why not, and what changed?

I knew who he was and what his job was, but I hadn’t really spent any time thinking or learning about him. But this came up, so I googled him and the only thing that’s left for Roger Ailes, his legacy in total, is his demise. That’s it. And so that’s a funny place to start from. But it was one of those classic moments for me of looking at that thing, going, “Well, I don’t think I’m interested in doing this. I can’t see the positive side of this.” And then receiving the script, and Jason Blum smartly just sent me one because if he’d sent me a bunch, they probably would’ve sat in the corner for quite some time. So he sent me one and I read it and it was really well-written. It was incredible. If I attach to a character, I do it in a subconscious way while I’m reading. And if you look at the draft I’ve read the first time for anything I’ve ever ended up doing, I’ve started taking notes on the page. I’ve started to play those scenes in my head. So, I just got really engaged, and I had to call my agent and say, “You know how I said I wasn’t really interested? That script’s really good.” I was like, “Can we be cheeky and say, ‘Can they send us another one?’ ” Which is exactly what Jason was expecting, so he sent me a second. And then the third, which was an absolute killer. So … I had to do it.

You reached out to many in his circle before the show. What was their feedback after?

The core thing that they said that’s captured is how much fun it was to be in his company. And [it was important to me] to not fall into the trap of saying, “I’m going to play the baddest man alive, who has ripped the moral thread of America asunder.” Because if you do that, you’re actually displaying the bias that the piece talks about in the first place.

Do you find that you watch news differently now?

I have to say I’m not a regular news watcher anymore, not that I was prior to this job especially. And I could never watch Fox News before anyway.

Solstice Studios’ Unhinged is now scheduled for release July 31 and poised to be a first big test case for whether people are willing to return to theaters. How are you feeling about it?

Well, we’ll see what happens. The studio is doing constant revisions on the idea in tandem with the exhibitors and local governments. It’s a hard position to take, but at the end of the day, somebody has to do it. They’ve got to test the water and see if that part of our life can come back. It was very interesting, Mark Gill, the CEO of Solstice, showed me research that they’re doing and how large a percentage of people, second to wanting to see family members they hadn’t seen for a while, wanted go to a movie. They wanted to go into a movie house and have the chaos and whatever happens on the screen be just in their imagination, not in real life. And the type of movie people wanted to see, which was a real surprise to me, was a thriller.