As season two of Luke Cage comes to a close, the bulletproof hero for hire has a new role to play in his neighborhood, monitoring and controlling crime from the roost of Harlem’s Paradise.

The second season of Netflix’s Marvel series concludes with the death of crooked politician turned crime boss Mariah Dillard (Alfre Woodard), and with Luke (Mike Colter) inheriting his late nemesis’ club, Harlem’s Paradise, the show’s central and most iconic location. All season long, Luke struggles with the best way to attack the problems facing his community, and in the end he resolves that the best path forward is to deputize himself as the veritable sheriff of Harlem, operating out of the same place both Mariah and the late Cottonmouth (Mahershala Ali) once called their home.

How did the twist ending come together? According to showrunner and creator Cheo Hodari Coker, Luke’s final landing point springs forward from a very simple desire: “We wanted to fuck with people’s heads.” And that desire was born out of Coker peeking into a few heads in between seasons. Coker, who was a music journalist before launching his career in television, cites his experience reading reactions to the first season of Luke Cage as a primary motivator for the stories he and his writing staff told in season two.

“Maybe it comes from being a critic, because I’ve criticized before, so I understand critics, for better or for worse,” Coker tells The Hollywood Reporter. “The conventional wisdom was the show fell off after episode seven [of season one, in which Ali’s Cottonmouth is killed off]. And one of the most critical voices, in a great way, was from Angelica Jade Bastien at Vulture. She wrote these episodic recaps, and some of them were scathing, but they were so beautifully written. One of things she wrote about was, ‘I wish they had spent more time trying to imagine who Cage is as a man, instead of just as a superhero.'”

Coker says he took those words to heart, and brought them to the attention of his fellow writers as they began breaking down the second season: “Let’s really think about how we can make sure that we’re always telling the most compelling Luke Cage story that we can. As fascinating as the Stokes family history is, and eventually the McIver family history [of season two antagonist Bushmaster] will be, we always want to make sure that the show is about Luke Cage, and that Luke is evolving in some way.”

In pushing Luke to the point that he resolves to fight corruption by risking his own corruption, Coker hopes fans will walk away from the season two finale with a desire to dig in deeper.

“I wanted at the very end of the season for people to really know this guy,” he explains. “I want them to think, ‘Let me go all the way back to episode one and watch all 26 again.’ We wanted a kind of twist that would make people do that.” 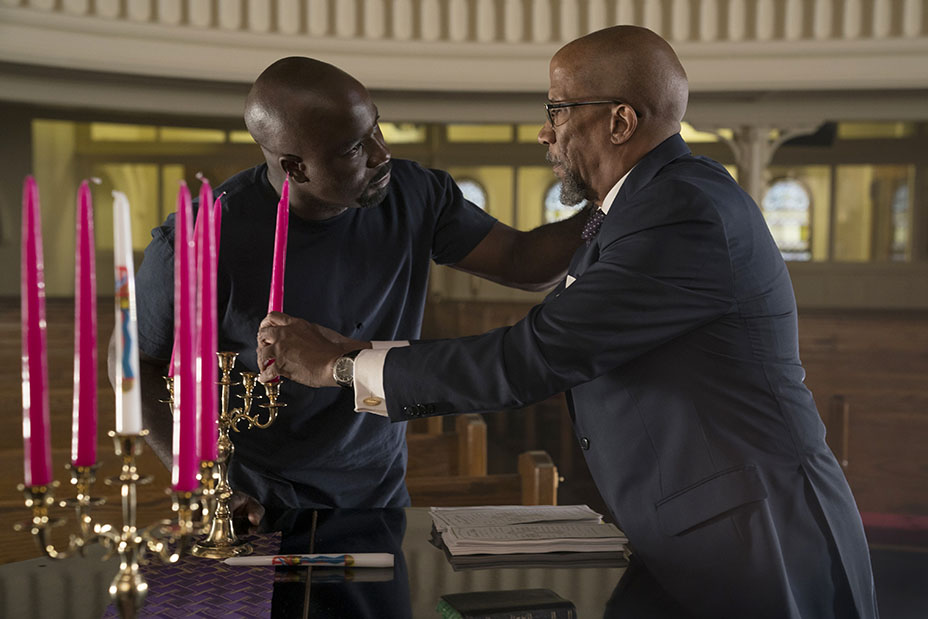 As part of the effort to humanize Luke Cage in season two, Coker and the writing staff leaned on a character who was frequently referenced in the first year of the show, but never seen: Luke’s father, James Lucas, a reverend played by the late Reg E. Cathey in his final screen role. At the start of the season, Luke and his father are at odds, and understandably so: In season one, Luke learned that his dad was secretly the father of his old friend turned foe Willis “Diamondback” Stryker (Erik LaRay Harvey), creating a heartbreaking rift that doesn’t heal easily.

By the end of the season, Luke and his father have reconciled. Indeed, the Rev. James Lucas gets the final spoken words of the season, lifted from a conversation with his son from earlier in the season.

“Your strength is from God, Carl. I have no doubt in my mind about that. But with that kind of power comes its share of pain,” he says, narrating the final images of the season, as a sharply dressed Luke sits down and contemplates his future as the Rook of Harlem. “Science? Magic? God? That power flows from within. From inside. What comes out when that pressure is heaviest? That’s the real magic. That’s what defines being a man. That’s what defines being a hero.”

The season then ends on one final image, a still shot of Cathey from earlier in the season, and two words in honor of the late actor: “Forward always.”

“Reg was just great,” Coker remembers of the late House of Cards and The Wire actor, who died in February of cancer. “He was funny, and his voice was just unmistakable. The second that we cast Reg [as Luke’s father], I immediately heard his voice in my head, and was able to write that opening sermon [in the season premiere]. Off the top of my head, I just heard Reg’s voice, and it just came out.”

Coker says the first table read of the season, in which Cathey delivered the aforementioned sermon, was one of the most unforgettable experiences of his creative life.

“In my 11 years of writing television, that first table read was the best table read I’ve ever attended,” he says. “From the second Reg E. read that sermon, oh man. The whole room was just like: ‘Oh my god. Not only does this work, but this is like, wow.’ And the thing that was great about Reg was that as much of a powerhouse actor as he was, he was also the biggest fan of all the actors that he was around. So, at a table read, he would be laughing at the jokes, and that’s how you would know which jokes really worked, because you would have this huge volcanic rush of laughter from this guy who was always just so powerful. That’s how you knew a joke would work.”

According to Coker, “the glow of that first table read stayed with us the entire season,” leading to more and more scenes between Colter and Cathey as Luke and his father. He says that Cathey’s illness became apparent during production on the ninth episode of the season.

“He was really sick at that point, but he soldiered through, because he really wanted to do it,” says Coker. “I don’t think he knew that it was going to be the last thing that he appeared in, but he had pride. He loved this show. He loved what he was doing. That was with the thing with him: He was there for us, and we were there for him. And I just wish we had the chance to show him the episodes before he passed. I would have loved to see him at the premiere, because I think this is really going to rank among his best performances.”

What did you think of the Luke Cage finale, and Cathey’s performance as James Lucas? Sound off in the comments below, and keep checking THR.com/LiveFeed for more coverage.