It’s now how Alfre Woodard’s increasingly lethal Luke Cage villain prefers to introduce herself; it’s the veritable blood-red verbal carpet rolled out by the man who wants nothing more in the world than to watch her fall: John McIver, aka Bushmaster, played with a ferocious intensity by The Deuce actor Mustafa Shakir.

Hailing from Jamaica and operating out of Brooklyn, Bushmaster enters the second season of Netflix’s Marvel series with an eye firmly on Harlem — specifically, toppling Mariah and everything she stands for, due to a deep-seated family grudge. Bushmaster becomes a force the likes of which Luke (Mike Colter) hasn’t encountered before, thanks to his tenacious dedication to taking down Mariah, fueled by a strength-enhancing substance known as nightshade.

Over the course of the season, Luke and Bushmaster slug it out, with victories on both sides of the aisle. He’s not the man to deliver the killing blow, but Bushmaster’s desire for Mariah’s fall is satisfied all the same by the end of the season, as she’s poisoned to death by her own daughter. At the time of Mariah’s demise, Bushmaster is far from the scene of the crime, back home in Jamaica, recovering from explosive wounds sustained near the season’s end.

With Bushmaster still alive (if not altogether well) and with Luke now in charge of Harlem, the door is wide open for John McIver’s eventual return to the Marvel Netflix universe. For now, here’s what Shakir told The Hollywood Reporter about how he brought Bushmaster to life and what he hopes will come next for the hard-hitting Luke Cage’s hard-hitting rival.

What was your entry point for Bushmaster?

For me, my first order of business was to scour as many film documentaries, interviews, what have you, about Jamaica and Jamaican accents, to just really inundate myself with the culture. I did that for a bit. I listened to a lot of Nyabinghi music, which is Jamaican gospel. And for some reason, more than anything else, that sort of brought out this feeling and this vibe about who this character is about. All of that prep, that research and what have you, was cool, but the first day of shooting I was still [uncertain]. Until you do it, you just don’t know it.

It was about the fourth day and the first scene when something just clicked, and I remember feeling it internally. Lucy Liu [who directed the season premiere], she was like, “Yay!” And then [showrunner and creator Cheo Hodari Coker] comes over to me all casually and he’s like, “Hey, whatever you did in that last take, keep that.” And I was like, boom. It’s that subjective feeling, you know? That vibe. But that’s what you see when you see Bushmaster.

What do you think it was that clicked for you on that fourth day?

I just believed in him. I believed in him. I had to really fight for him, fight for everything he wanted. And to feel good about the process. I felt like what really clicked there was confidence. It’s a subtle point, so it’s hard to really break it down. It was a confidence in me, for what I was doing, and the connection to the character. “Charisma” is the word. He can have charisma, he can have humanity, just humanity as a villain. Not some just stereotypical shit.

How did you master the accent and dialect?

I’ve been doing accents all my life. I saw the effect that different accents have on people. Someone comes into the room and everybody’s speaking standard English and they bust out in any accent, you get a different response. To be quite, quite honest, I started learning accents so that they would give me free stuff in restaurants. (Laughs.) I would go in and do the British accent and it was like I could do no wrong.

But to get real specific with Bushmaster, I modeled him after a hybrid of Usain Bolt, quite honestly, the way he emphasizes his words sometimes. But he emphasizes it without screaming. It’s a lot of movement in his face, but soft-spoken. Him and Jimmy Cliff from The Harder They Come, which I watched a million times. Sort of their ease is where I modeled it from, to get specific with Bushmaster. 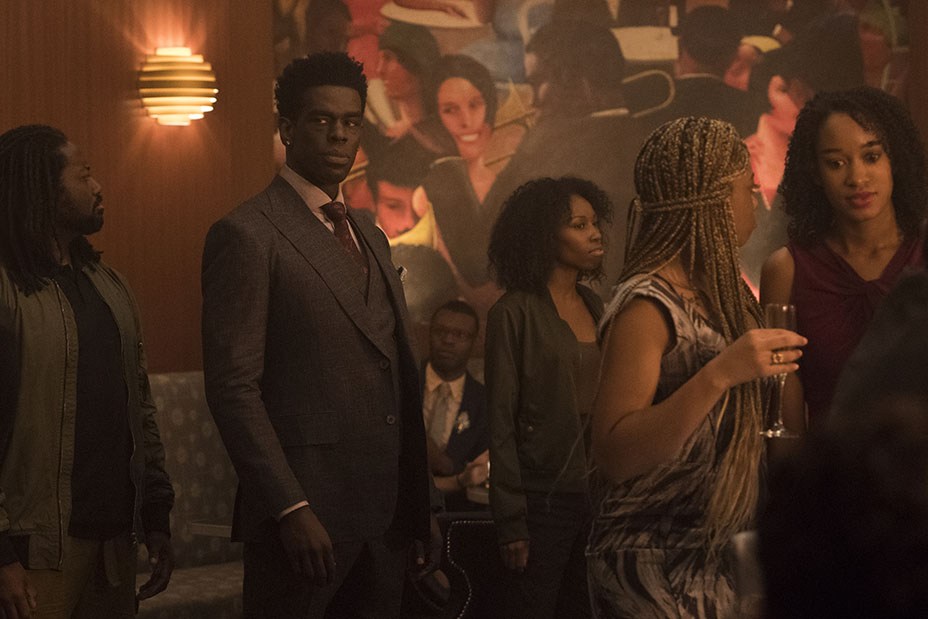 How did you prepare for Bushmaster’s physicality?

I’m physical. I work out pretty regularly. Six to seven times a week. With Bushmaster, I had to get specific with my training because of this [Capoeira fighting style]. I was a little bit bulky, about Mike’s size. Maybe about five pounds lighter than Mike. But in order to do those moves, I would have to drop 10 or 15 pounds. So I just got on the cardio really hard, and did a bunch of kick drills to keep the joints nice and loose. I did a lot of floor work, yoga, and that prepared me for the fight choreography.

In terms of training, I had some two- to three-hour sessions. We would tape the session, and then I’d come home, and in addition to my working out, I’d just go through the movements to get them in my muscle memory. And then you show up on set and knock it out. Sometimes it’s some adjustments, but for the most part, if there had to be some major adjustments on set, they would bring in a stunt double or something like that. I did the majority of my stuff.

The big conflict in Bushmaster’s life is the score he has to settle against Mariah Dillard, or “Mariah Stokes,” as he prefers to call her. How did you tap into his need for vengeance?

I forget exactly what episode it was in, but he speaks about the Maroons and his connection to them, and how that’s at the core of his belief system. If you understand the Maroons, they were all about resolution and about being free and not being subjugated. They were fearsome about it. Because of that fierceness, they were able to actually effectively hold off the British for many years. Some say longer. They said 80 years, but some say longer. It was the fierceness.

For Bushmaster, coming from that as a lineage, that being his ancestry… the decisions that the Stokes made, it’s like they chose Babylon. They chose the oppressor. It was the politicians that we spoke about. It was about the cops, they wanted to pressure them to change the business. It was the Stokes who sold this family out to the oppressor. It’s what makes them a prime target in his pursuit of bringing down Babylon, essentially. That’s what his whole goal is.

The episode where the drugs are introduced, he talks about, “Hey, man, this stuff is poisoning the kids. This is not what I’m fighting for. I’m fighting to end the suffering there.” And so that’s the noble part of him, which shouldn’t be obscured by the fact that he’s a fugitive, violent, period. I think that just because they sided with the oppressor, he has to go with that level of vengeance. It’s the ultimate betrayal, in his mind.

By the end of the season, Bushmaster is still alive. Mariah is not. What do you imagine for the character’s future? What are some of your hopes if Bushmaster gets to come back for another season of Luke Cage?

My hope is, seeing that his dependence on Nightshade really muddled his judgment in a lot of ways… I think it was the reason for some of the extreme behavior, to be quite honest. I think he had some “roid rage.” (Laughs.) You know what I’m saying? Just to say the least! So I would like for him to master his powers. Because what gives him his strength is internal. It’s not the Nightshade. The Nightshade, as they say, it reveals. It shows what’s already there. So he’s already got specialness. He survived those inoculations that killed those other kids. He took to the healing when he was shot in the stomach. I want him to be able to step into having a greater capacity to control himself without overdoing it. I think it limits the amount of power that he can actually express. Maybe if he goes back to Nine Mile and takes those diluted concoctions of Nightshade, he’ll tune in to the waterfalls and the nature around him, and really become more powerful. Maybe that power can somehow come back to Harlem and do some good.

It’s interesting, because he and Luke are at odds for a lot of the season, but not always. They work together at certain points, and Bushmaster makes it clear how much he respects Luke. Given how the season ends, with Luke at the head of Harlem’s Paradise, what do you envision for their future together?

I think their relationship is antiheroic in and of itself. Because it’s definitely in that gray area, and will continue to be, because there’s a mutual respect. But our methodology is different, so that makes it difficult for us to work together. Being that Luke is stepping into that Harlem’s Paradise spot, and the not-so-subtle hints about mutually getting shit done, being an increased focus. Power corrupts. I think maybe he might go a little bit darker, and when Bushmaster comes back to the city and back on the scene, there might be some ways that they can work together.

I don’t know. I think with my imagination sometimes, I feel like Luke is going to go nuts in the street and they’re going to be like, “Luke, what have you become? We need to get somebody who can beat up Luke Cage.” And then they come back and they go to Jamaica and find [Bushmaster]: “This is the only guy who was able to do it.” I know exactly how that intersection would happen. But I think as a broad point, I think it’ll be a lot of gray areas. At least, I hope so, because that’s a lot more interesting to me.