On the CBS political drama, Leoni stars as the titular Madam Secretary, former CIA analyst turned Secretary of State Elizabeth McCord. In the premiere episode for season five, “E Pluribus Unum,” a national disaster sends Secretary McCord seeking advice from the former secretaries, a practice that is common in the real White House. The cast spoke during a panel, hosted by THR‘s East Coast digital lead editor Jackie Strause, after the episode screened to an audience at New York’s Spring Studios on Thursday night.

“I was at Hillary Clinton’s husband’s birthday party last summer, and she came up to me and was talking about the show and how much she loved it,” McCreary explained during the panel about how Clinton’s cameo came together. “Hillary asked if we would consider writing a little role for her. She could… maybe play a spy? But it was a birthday party, so I thought, ‘Maybe she was being nice.’ But then we asked if she would play herself and she said yes.”

Leoni called the scene — which saw her acting with three people who help inspire the show — the “crowning jewel moment” of the series so far. “The minute the three of these great minds of foreign policy were assembled in that office — it was so moving,” said the star of Clinton, Powell and returning guest star Albright, a friend of Leoni’s TV husband Henry (Daly), it was revealed. “I think what a lot of us responded to was that these are three brilliant minds from three different administrations — and two different parties — and they were so supportive of each other. Even now, years out of their role, they’re still involved and fighting for us. So, I slept really well that night.”

The cast admitted that they were nervous about how the politicians would be once the cameras started rolling and once they did, they witnessed the three one-upping each other about the real-life disasters they had handled.

“The first read-through — that sucked,” Leoni admitted to laughs. “I thought, ‘Well, at least I have them on something.’ But then I didn’t. Because six minutes in, they were improvising. I’m waiting for the next line to come from Secretary Powell and all of a sudden, Secretary Clinton said, ‘You know Elizabeth, it’s also about all this.’ And then, of course, Secretary Albright was not going to leave that alone. She said, ‘I agree. But you know, Hillary…’ Then, there’s no way General Powell was staying out of that one. Before you know it, we just sat back and they were brilliant.”

We’ve got some BIG guest stars in store for Season 5! Former Secretaries of State @HillaryClinton, @Madeleine, and Colin Powell will be appearing on the season premiere of #MadamSecretary on Sunday, October 7! pic.twitter.com/C4WrY2EcMk

Madam Secretary is known for featuring storylines that parallel and occasionally predict real-life developments in political and social issues — for example, the Jan. 14 episode of season four that saw McCord invoking the 25th Amendment to temporarily strip President Conrad Dalton (Carradine) of his powers. The week before, Michael Wolff, author of the Trump administration profile Fire and Fury, claimed during an interview on NBC’s Meet the Press that the 25th Amendment was in discussion “all the time” in the White House.

“An awful lot of what we address are things that are happening in the world, but the way our team deals with it is much more maturely,” said Carradine of the current administration, much to the enjoyment of his fellow castmembers. “The way we solve problems in the show is actually fiction.” He later added that the most common fan response he gets is: “I wish you were the president.”

Added Leoni, “It is amazing to be doing something in this climate that we have politically and around the world. It is not lost on me that we are able to play every day how it could [be]. There are shows that tackle very difficult and dark issues, and I don’t know how I would fare with that. But it is a real joy and an honor to come to work and put forth what could be.”

Given Madam Secretary‘s willingness to embrace storylines that capture the political zeitgeist, THR asked McCreary and the cast whether storylines from the show’s fifth season would address the #MeToo and Time’s Up movements. Not to mention the extra glare on the female-dominated series whose network is fighting a #MeToo investigation of its own after the ouster of former chief Leslie Moonves.

“We actually address an incident from season three,” said Leoni, referring to the episode that saw her character being sexually harassed by the Philippine president. “He went in for a grope and Elizabeth met him with an elbow and broke his nose. He comes back this season, and I have an opportunity to chat with him about it.”

About the upcoming episode, the fourth of the season, Leoni said, “Elizabeth handles it, but Elizabeth is in an incredible position to handle it. I have four Secret Service detail with me and a TV show, so I get to win really easily. In some ways, that’s a great moment to show. But it’s also a sobering reminder that it is rarely that easy to solve or to face or to deal with.”

When asked why they decided to revisit the storyline, Leoni said matter-of-factly, “We made it fit in.”

When speaking to THR on the red carpet ahead of the panel, neither Carradine nor Ivanek seemed worried about the fate of the series post-Moonves. “I was very disappointed to hear about the issues with Les. I understand his decision to step aside and I just think that there’s healing that has to go on and we move forward,” said Carradine. “As to our show, it will stand on its merits. I would think that how well our show is doing and where it sits with the American public will have more to do with our future than anything.” Added Ivanek, “I don’t know what it will mean for CBS. I hope we’ll be around a little longer. He ushered us in, but I hope we last another year or two at least.”

In light of the current political climate, McCreary felt it was important to include more storylines about female empowerment. “We tackle a lot of really important issues — especially women’s issues — on this show,” she said during the panel. “We’re always trying to do it in a way that works in our show, which is about diplomacy, especially international diplomacy, so we can take a topic that is in the news, or that people are thinking and talking about, and put it into another country. Sometimes when we take a topic that we’re dealing with in our own country, but we look at it in a dramatic series in another country, it’s a little easier for it to sit with us and realize, ‘Whoa.’ And see a little bit about ourselves in this.”

The fourth season ended with a revealing confession from Secretary McCord, as she said out loud to her husband Henry that she wants to explore a run for president. That, according to McCreary, will be a thread throughout season five.

“I’ve never really been privy to what goes on when you make the decision to think about throwing your hat in the ring and everything that goes into that,” she said. “We’re going to tease that out this whole season and look at how it’s affecting the relationship and the family, because now there’s going to be a bigger spotlight on the McCords. Then people will start to hear that she’s thinking about running, so we’re going to explore all of those different facets of the decision-making process — and who knows what she’ll decide at the end.”

President Dalton is only midway through his term, but Leoni has her own hesitations about the potential Oval Office promotion. “I fit with this role right now. I like what Elizabeth’s up to. I understand how she got here,” she said. “It will be interesting. I’ll have to see if Elizabeth has what it takes to be president.” 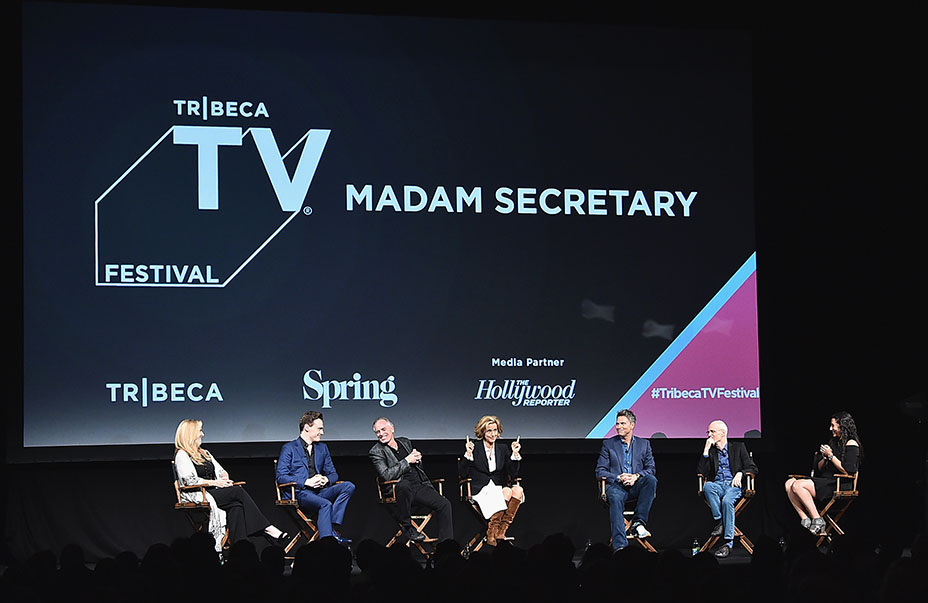 Whether or not Madam Secretary eventually becomes Madam President, the platform that the drama — which recently hit the 100-episode milestone — has given the cast is not lost on its stars.

“Blake’s coming out episode was one that when the script came in, I thought, ‘Are they giving me all my lines on one page? I’m not doing a page-and-a-half monologue on television about any topic, let alone about coming out as a bisexual male character,” said Bergen, who plays Secretary McCord’s trusted assistant Blake Moran. “It’s never been done. People have tried to talk about that issue. We did it and CBS said, ‘Great. Go ahead.'”

Of the reaction, the actor added, “I remember that night my phone was buzzing off the table because of the tweets and Instagram posts. All the people writing in saying, ‘You inspired me to come out to my family.’ That is when you realize what we’re doing: someone’s watching, someone’s paying attention.”

Bergen also praised the character of Elizabeth McCord for portraying a strong woman, something that is relatable across generations. “One of the things that has been most impressive is seeing women come out of the woodwork because of our show and say, ‘That’s me,'” he said. “For people in my mother’s generation who were being Elizabeth McCord for so long and now you finally have them on television? Women were always doing this. It’s just that, somehow, as we saw in the last election, being strong and being that way is somehow looked down upon with women. I think what we’ve done with this show — and this is obviously a credit to Tea and the writers — we have made it so it’s like, ‘Oh, there you are.'”

For Daly, what is most humbling is the bipartisanship of viewers. Perhaps, thanks to the show never identifying the starring administration by its party. Dalton even ran for re-election as an Independent.

“I’m struck by how many fans we have on both sides of the aisle,” he said. “Maybe the most brilliant thing the show does is that it removes the (D) and the (R) and it forces people to listen to the ideas. I believe that human beings are imbued with some sort of common sense and when they’re confronted with it, they understand it. When it’s split by a tribal label, then they’re rejected. But this show enables people to actually recognize something that makes sense.”