Continue to The Hollywood Reporter SKIP AD
You will be redirected back to your article in seconds
Skip to main content
March 5, 2017 6:01pm
Logo text

[Warning: This story contains spoilers from the series premiere of Fox’s Making History.]

Adam Pally is about to find out what happens when a girl from colonial Boston dates “a bit of a dummy” from 2017.

Making History, which premiered Sunday night on Fox, started with a man wanting to visit his girlfriend hundreds of years in the past, and ended in a space-time debacle.

The new comedy, starring Pally, Leighton Meester and Yassir Lester, follows the friends, who use time travel to form relationships across eras and fix past mistakes affecting the present. Facilities manager Dan (Pally), who has discovered that he can travel through time in his oversized duffel bag, goes back in time with Chris (Lester), a college history professor, to make sure the American Revolution hasn’t gotten delayed because of his historical romance with Paul Revere’s daughter. Making this all the more complicated is the discovery that Dan never “invented” time travel at all, but stumbled upon it among his father’s belongings after he died.

Back in time, they meet with their drinking buddies (Sam Adams and John Hancock), bribe guards with ham (like “diamond-covered heroin” in the past) and try to start a revolution, all while Dan tries to woo Deborah (Meester), largely using Celine Dion lyrics and Jerry Maguire lines.

From 'Girls' to Time Travel: How Yassir Lester Went Back in Time for 'Making History'

It’s this relationship that the show’s star, Pally, sees as central to the show. He tells The Hollywood Reporter that the show’s strength is in how it addresses this romance across time, “especially with my character being a bit of a dummy and kind of a blowhard.”

The first episode ends after Dan leaves Chris in colonial Boston to put his historical knowledge to good use and make sure the American Revolution gets started as it should — but things go awry. Immediately after returning to present day with his girlfriend in tow, Dan discovers Chris died in battle the very next day. Their budding relationship will truly be tested when Dan and his new girlfriend go back to colonial times to try and save their new friend.

Pally spoke with THR about the practicalities of time traveling with someone from the past, and how to keep the spark alive with a girlfriend from the 1770s.

How did you get involved with this show?
I was looking to work, because I have children, and I got sent this script and I liked it, but I had heard that Phil [Lord] and Chris [Miller] were looking at other people and then they saw a movie I had at Sundance called Joshy and decided that I was the guy. They called me and asked me to come in, so I thought that it was about the Han Solo film because I have a giant ego. (Laughs.) I kind of do look like Harrison Ford, but they were like, ‘Oh, no no no, that is young Han Solo, so you were not really in the running.’ But they had this time-travel comedy, and I was in.

I had done a bunch of romantic comedies in a row and I was looking to do something a little bit different. I love that genre, but I was looking to do something a little bigger, something more high-concept. So when this came to me, it just seemed so funny and interesting and apropos for the times we’re in. It deals with the birth of America and America throughout its history, and now we’re in a bit of a crisis with civil liberties and tough topics, so it was such perfect timing. Comedy can be more effective in this type of thing, too. You’re looking for a nugget of truth, which is what comedy and jokes are.

The show features a lot of comedians fans may be familiar with too.
For sure, and especially more into season two. [Saturday Night Live’s] Tim Robinson is on the show, who is just a stone-cold comedy machine. There’s Neil Casey, John Gemberling, Brett Gelman. Gelman is always a pleasant surprise, both in life and in this show. We tried to stack the deck as much as possible, and I think one of the fun things about having this show that was following this production model is we could pull people in so when you see them, you’re pleasantly surprised. Going into season two, there’s a lot more of that planned.

You’ve said before how this show is very different in how it approaches time travel, compared to what’s already out there. Why do you think that’s valuable?
Especially now, after the president has issued a Muslim ban in our country, and just going back and actually realizing that we’re all immigrants from other lands — that’s how this place was started, it’s what we’re all about, so seeing the same issues arise that reflect a certain kind of racism and fear that are now coming up in America — it’s just the same song, different singer. And that was cool to see in the show.

The first episode addresses things like slavery and women’s rights. What other kinds of topics and issues are you looking forward to addressing throughout the show?
We deal with gun control, immigration, racism, censorship. … We deal with the mafia ­— anything that is going on today, we kind of attack with all these weapons of actual American history.

In the first episode, we discover that you didn’t so much invent time travel, but happened upon it. Do we learn anything more about this backstory?
That’s something we want to slowly pull back. We were taking cues from Breaking Bad when they pulled backstories in larger arcs as they were doing smaller episodes. It’s kind of a slow burn. Certainly it becomes integral in season two, should we be lucky enough to make it.

How accurate to both time-travel lore and history are you in the show going forward?
We always play it real with historical figures, we’re not taking any liberties with history. What we’re taking liberties with is a lot of times in other time-travel shows, you get caught up in the physics and the rules of it, and to us that felt boring. We wanted to get there and keep moving. It just became not as much fun to make jokes about the space-time continuum as opposed to John Hancock and Sam Adams being drinking buddies. One of the luxuries of having a time-travel device that’s so easy to use is you can go anywhere really quickly. There’s friends at the bar, like tropes from other sitcoms, only our friends at the bar are Sam Adams and John Hancock in colonial Boston. So it’s really a plus, and as we go forward, you might see historical figures in time periods you might not know. 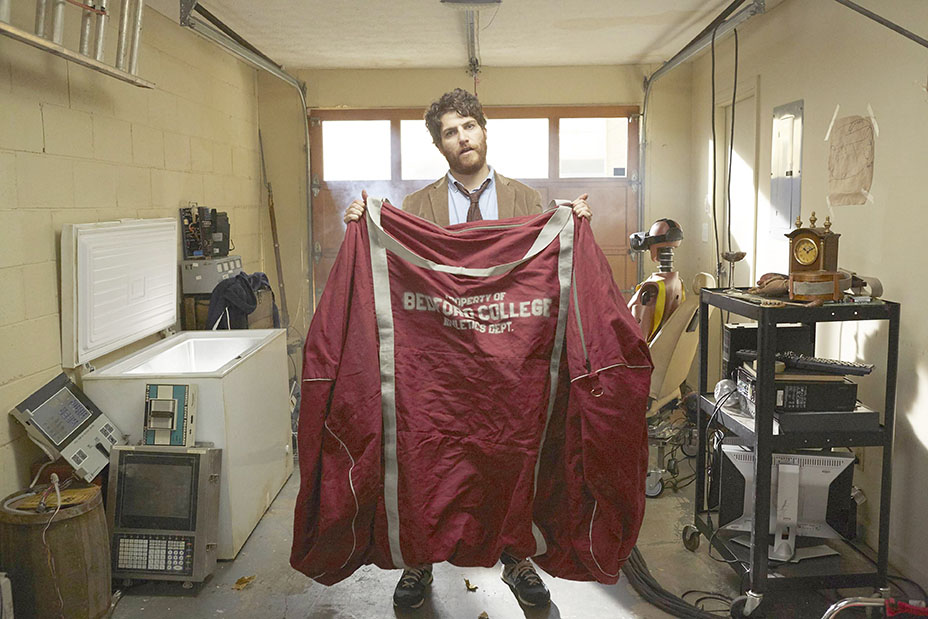 What are the rules to this version of time travel?
If you want to time travel in New York City, you can do it. If you want to time travel on a Wednesday, you can do it, but you’re gonna end up on a Wednesday in New York City. That’s basically it — you have to be in the same place. It’s pretty simple. It’s not like teleportation devices where you can magically be in London. It’s just playing with time. It’s unnecessary to comedy, but the way that our plot kind of unravels, of course there will be different issues with how to travel and where. For example, we do go to 1940s Germany to try to kill Hitler, except it is pretty difficult to get a passport for Deborah Revere, considering she’s a dead person.

So the first episode ends with leaving Chris back in colonial Boston and bringing Deborah to present time. Where does everyone go from here?
The issue becomes if you’re now in love with someone from the past and you’ve brought them to the future, how do you keep that quiet? And I think that becomes the major crux of the entire season, especially with my character being a bit of a dummy and kind of a blowhard.