[This story contains spoilers for episode four of The Mandalorian.]

Pop culture gave birth to an icon a few weeks ago, but for Mandalorian director Bryce Dallas Howard and her family, it’s been an “agonizing” year as they carefully kept a lid on the secret of Baby Yoda. Howard, who first tossed her name into the Lucasfilm hat by shadowing her father, Ron Howard, on the set of Solo: A Star Wars Story, had to create a daily mantra for her young children.

“The thing I was most nervous about was that my kids had been on set quite a bit. So they had seen Baby and interacted with Baby,” Howard tells The Hollywood Reporter. “When we were filming, my kids were 6 and 11; they’re now 7 and 12. When the kids went back to school, every single day I would say, ‘So, what are you not gonna talk about today?’ And they would say, ‘Baby!’”

As an actor turned filmmaker, Howard couldn’t help but draw on her own body of work when helming scenes of her Nov. 29 episode, “Sanctuary.”

“There’s a shot behind Omera and Mando … when they’re inside the cottage,” Howard says. “We did French overs for that, which is a tiny homage to a scene I had with Joaquin Phoenix in The Village. And then, of course, with all the AT-ST stuff, Jurassic is definitely a really great reference for that — when you’re on the run from a monster in close proximity and that monster is 30 feet high.”

In a recent conversation with THR, Howard also discusses the state-of-the-art technology being used on the Mandalorian set, the particulars of directing Baby Yoda and the luxury of having some of Ludwig Göransson’s score during production.

Pop culture gave birth to an icon a few weeks ago, something you’ve known about for over a year. What’s it been like to keep the secret that is Baby Yoda?

Agonizing! (Laughs) I’ve been walking around for the last year with a face like the cat that ate the canary. I’m so, so, so excited to be a part of this and the phenomenon that Baby has become. The thing I was most nervous about was that my kids had been on set quite a bit. So they had seen Baby and interacted with Baby. When we were filming, my kids were 6 and 11; they’re now 7 and 12. When the kids went back to school, every single day I would say, “So, what are you not gonna talk about today?” And they would say, “Baby!”(Laughs) I’d be like, “That’s right!” I would just consistently remind them that there’s no circumstance that could ever arise where they’re allowed to talk about Baby. Now, for them, it’s very confusing, because I’m like, “Oh, now, you can talk about Baby,” and they’re like, “Oh, okay.” We’ve been having this routine for about a year now, and it’s fun; it’s really, really fun. Everyone is super pissed that there’s no merch. (Laughs) Everyone is like, “I want a Baby Yoda stuffed toy!” But I think they made a good choice in not focusing there and just focusing on the storytelling. 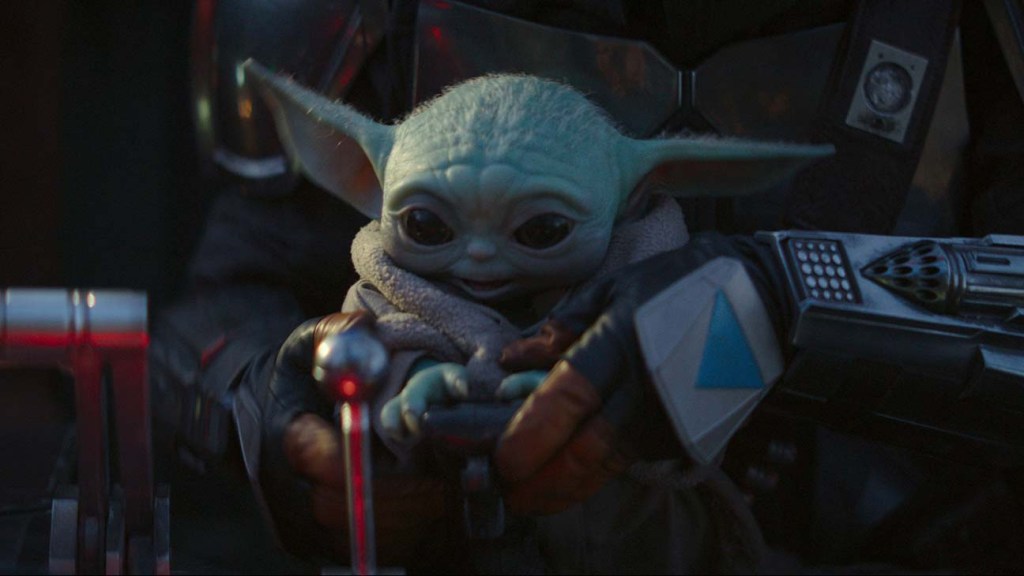 How much flexibility did you have when it came to directing Baby Yoda and his puppeteers?

Quite a bit! A tremendous amount. Because of the workflow that Jon Favreau has set up — which is basically an extension of what he developed for The Jungle Book and then The Lion King — it’s a really wonderful process where, as a director, there’s a lot of freedom. What happens is you go into the office, you read the script, you sit down with Jon Favreau and Dave Filoni and ask questions. From there, I got to work with Dave Lowery, who runs the storyboard department and ultimately the pre-viz department, which is called the Third Floor. It’s funny because the company, the Third Floor, is actually positioned on the third floor. They do all of the pre-viz, which basically means they’re animating the episode. Typically, they would only do it for action scenes, but in this case, because we needed to build the environment for the volume, we needed to start making those digital assets very early. So that’s why we rely upon the pre-viz. When you’re doing the pre-viz and the storyboards, if you have ideas as a director, you just do them; you don’t even have to pitch them. Eventually we screened the episode for Jon and Dave to get feedback and more ideas. And then we build from there.

In the case of Baby, Jon was really, really wise in that even though Baby was cute, he was like, “We can’t just treat Baby like this cute little stuffed animal; we need to treat him more like a little baby crocodile, sort of amphibian that is cute but also could maybe kill you.” It’s not just leaning into the fact that Baby is adorable. In my episode, because there are children in the episode, we’re allowed to see how others react to Baby, and we were able to lean into that a little bit. The puppeteers were from Legacy, Stan Winston’s company that he built. He’s no longer with us, but I worked with them during Terminator Salvation and Jurassic World. So early on, I got to be a part of many tests where our mission was to push what the puppet could do — to see what was possible — because we wanted to use the puppet as much as possible rather than relying on CG. So it was something that was really so full of wonder, adventure and discovery when we were figuring out all these things that the puppet was actually capable of. The Legacy operators said that each director would have a different way of directing Baby, and for me, what they would do is they would just look at me the whole time because I was just pulling faces. They were like, “We would just copy the faces that you were making, Bryce.” I was obsessed with Baby and Baby’s internal journey. I would just talk it out, “Oh, Baby is very worried right now, but guess what? Baby has a little bit of an idea, and Baby is a little bit curious and thinking about his idea.” (Laughs) I was sort of being an announcer for what Baby was possibly doing. 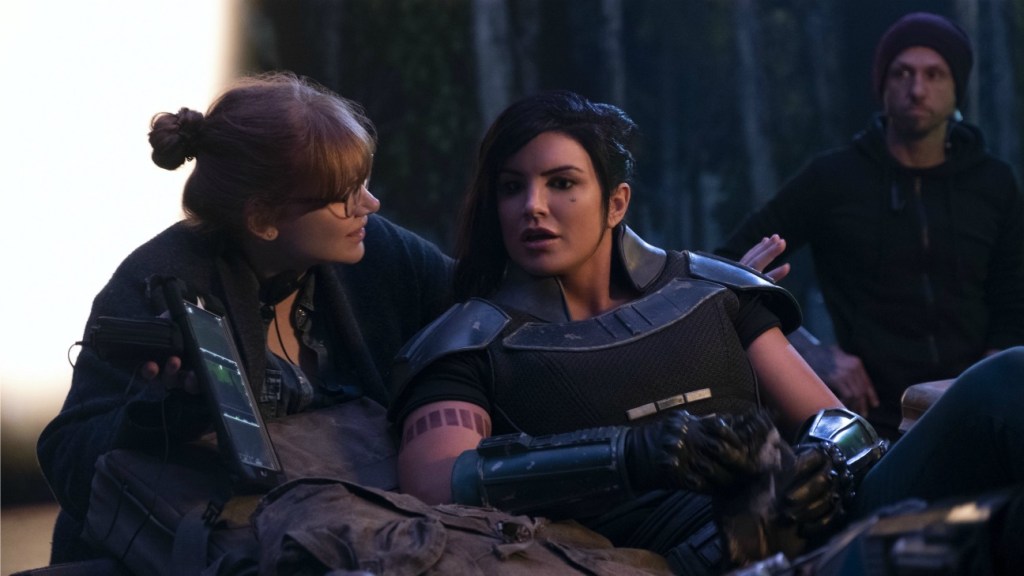 Given your body of work as an actor, it’s quite fitting that you would be tasked with introducing a giant AT-ST, first with its footprint and later through the trees at night. Were you conscious of the connection that people are now making to Jurassic World, or is it merely a coincidence?

Completely conscious! I had so much fun with that. I never felt like I’d seen an AT-ST really be as scary as it could be given its stature and power. I was first thinking, “What’s the scenario where there’s a village of people and there’s some monster in the woods?” and not knowing exactly what that monster is, but it’s a threat. That was something fun to try and play up. Jon Favreau would be like, “Oh, Bryce, that’s like your first movie, The Village,” and it kind of is. (Laughs) There’s a shot behind Omera [Julia Jones] and Mando [Pedro Pascal] when they’re looking out at the children when they’re inside the cottage. We did French overs for that, which is a tiny homage to a scene that I had with Joaquin Phoenix in The Village. And then, of course, with all the AT-ST stuff, Jurassic is definitely a really great reference for that — when you’re on the run from a monster in close proximity and that monster is 30 feet high. So that was something I was keenly aware of. 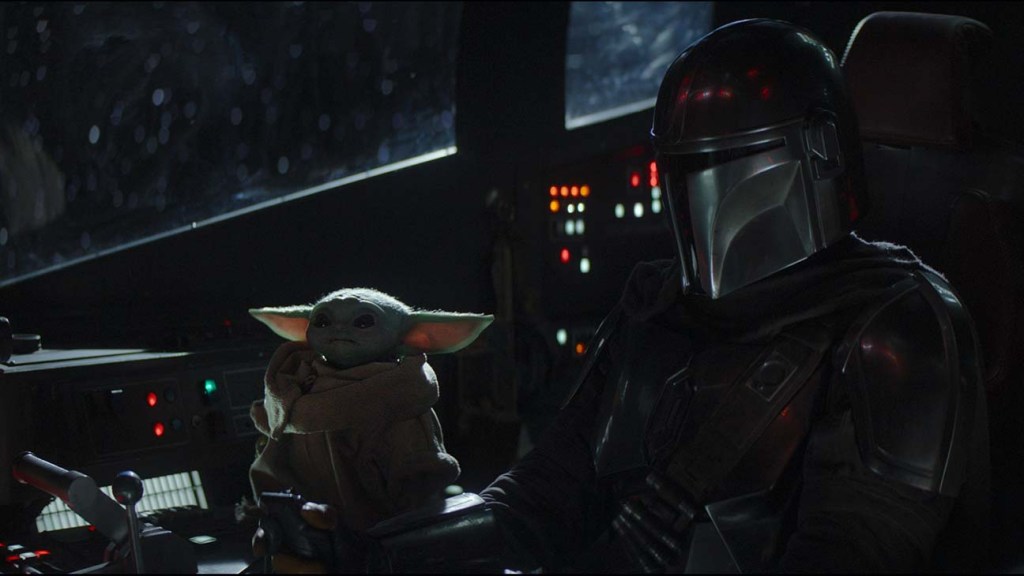 The Mandalorian armor, especially the helmet, is very reflective. Is it a bit of a process to control what his armor should and shouldn’t reflect?

Great question. This is my favorite kind of stuff to talk about. This is also the genius of the technology. I don’t know if you’ve heard about the volume and how that all works; I know I referenced it a little bit in regard to the pre-viz. Basically, it’s kind of like this egg-shaped dome that you step into, and it feels a little bit like a holodeck. Rather than a backdrop, what you’re looking at looks like a real background to the naked eye. Because of that, the reflections on Mando’s helmet are okay. We don’t have to worry about it, because you’re not really surrounded by a bunch of lights, green screens and people hiding because you’re in the environment. It’s almost as if you’re filming outside and you’re not having to fake anything. There’s a lot of freedom that comes with that. It’s only because of this technology, and specifically the parallax. When the camera moves, whatever is in the distance actually changes. Very long story short, all of the reflections are usable, beautiful and not stressful because of the technology. I don’t think we could’ve done this two years ago. (Laughs) This is very, very new technology that’s enabling us to film this way.

You were able to listen to some of Ludwig Göransson’s score during production. How helpful was that in terms of finding and maintaining the tone?

Oh, gosh. Ludwig’s score wasn’t composed in its entirety until afterwards, but he came to set early on and played around with a lot of stuff. Then Jon played it while we were all standing there. It was so exhilarating, and it absolutely informed the tone of our work. There was something very ancient about the sound, and it wasn’t similar to anything that you were used to hearing in the Star Wars world. And yet, it was reflective of this kind of mythology that we’ve come to rely upon Star Wars for. So it’s really exciting to have Ludwig be the composer and be a powerful voice in this process as a storyteller. It’s new, it’s fresh and it’s so ripe. 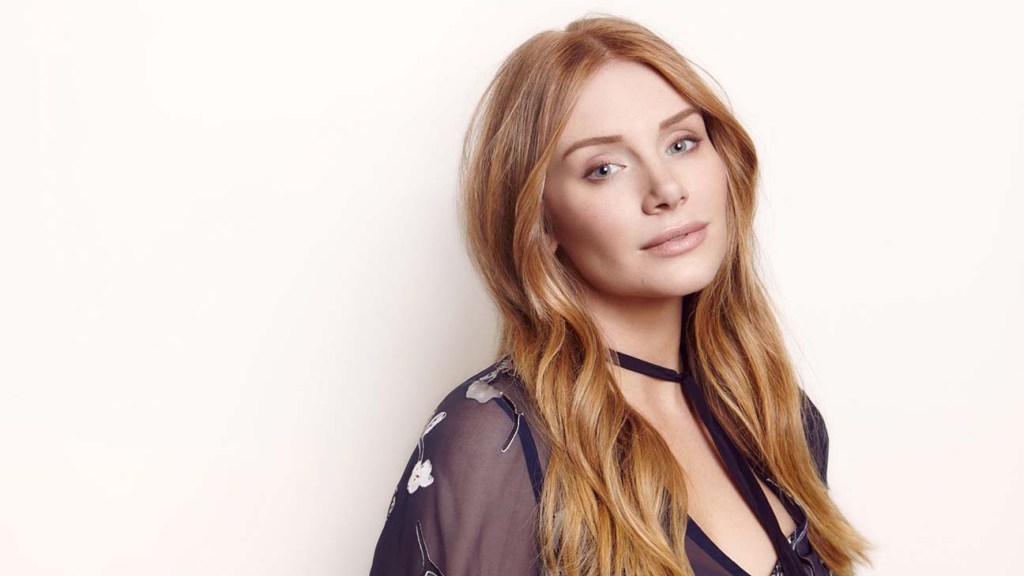