[This story contains spoilers for The Mandalorian season one finale.]

The first season of The Mandalorian has reached its conclusion, and what an epic season finale it is. The eighth episode, “Redemption,” directed by Taika Waititi, came with revelations aplenty. Mando (Pedro Pascal) has a name, a face and is a space daddy. OK, so the last one we knew but this episode makes it official. We also got to see more of Baby Yoda’s prowess in the Force, more of Cara Dune (Gina Carano) and Greef Karga (Carl Weathers) kicking ass, and more from the character who seems poised to be Mando’s nemesis for the immediate future, Moff Gideon (Giancarlo Esposito), who is in possession of an elegant weapon from a less-civilized age. All said, Waititi delivers a big episode, jam-packed with everything that has made The Mandalorian such a sensation, ironing over some of the weak spots from earlier episodes and promising an even grander season two. With scripts for the second season already written and production underway for a fall 2020 release, “Redemption” gives us a good idea of what we can expect from future episodes, along with a few things fans are hoping for.

Though it’s been teased throughout the season, “Redemption” finally gives us the flashback to the Mandalorian’s childhood in full, and is set sometime around the Clone Wars. Through the voiceover provided during the flashback we learn that Mando does not hail from the planet Mandalore, and that his heritage is a creed rather than a race. He was a foundling named Din Djarin, and was adopted by a Mandalorian warrior and trained in the ways of The Tribe when he came of age. In true Star Wars fashion, the parallels of Mando’s origin story and those of Baby Yoda are not lost on us. Once a foundling himself, Mando now finds himself as an honorary father to another foundling. This is the way. But there’re still plenty of stories to be told about Mando’s past, his training and his legacy as part of a people who were once at war with those who wielded the Force, the Jedi.

Though many of The Tribe were wiped out, the remaining Mandalorians have spread to other parts of the galaxy. It seems likely given Mando’s charge of a force-wielding foundling that the Mandalorian-Jedi War of the Old Republic will be detailed. The legacy of Mando and Baby Yoda does not just begin with the specifics of their birth, but creed and religion that define their two peoples. At the end of the episode Mando gives Baby Yoda a necklace depicting the Mythosaur, one of the traditional symbols in Mandalorian iconography. Should this be a tease that Mando plans to teach him “the way” then it only seems inevitable that Baby Yoda finds himself torn between the ways of the Mandalorian and the pull of the Force.

While the idea of a lone gunslinger and his charge certainly has its appeal, particularly for those who appreciate the Lone Wolf and Cub allusions in The Mandalorian, the series is at its best when Mando is part of a team. A significant part of the joy of Star Wars comes from seeing a ragtag group of people thrown together and develop familial relationships. The final two episodes of the first season have been a joy on that front, and while the season concludes with Mando and Baby Yoda striking out on their own, new companions surely can’t be too far away. Cara Dune stays behind on Navarro to serve as an enforcer for Greef Karga as he plans to rebuild the Bounty Hunter’s Guild now that the Imperial presence has been demolished. But we don’t see either of them staying out of the action for too long, especially Dune, whose feelings for Mando may be more than just a militaristic bond.

And of course there will be new characters as well to help or impede Mando in his search for Baby Yoda’s home world. That search seems likely to take us to new parts of the galaxy, but I hope that we see some familiar races pop up as well, as Mando and Baby Yoda add more than humans and droids to their list of affiliates. Maybe there’s even a chance for Yaddle — the only other member of Yoda’s species to appear in Star Wars — to show up, assuming she wasn’t killed in the Purge when she left the Jedi Order. And hey, maybe enough time has passed for a Gungan to make an appearance. Star Wars fans are famous for their measured responses after all, meesa thinks. 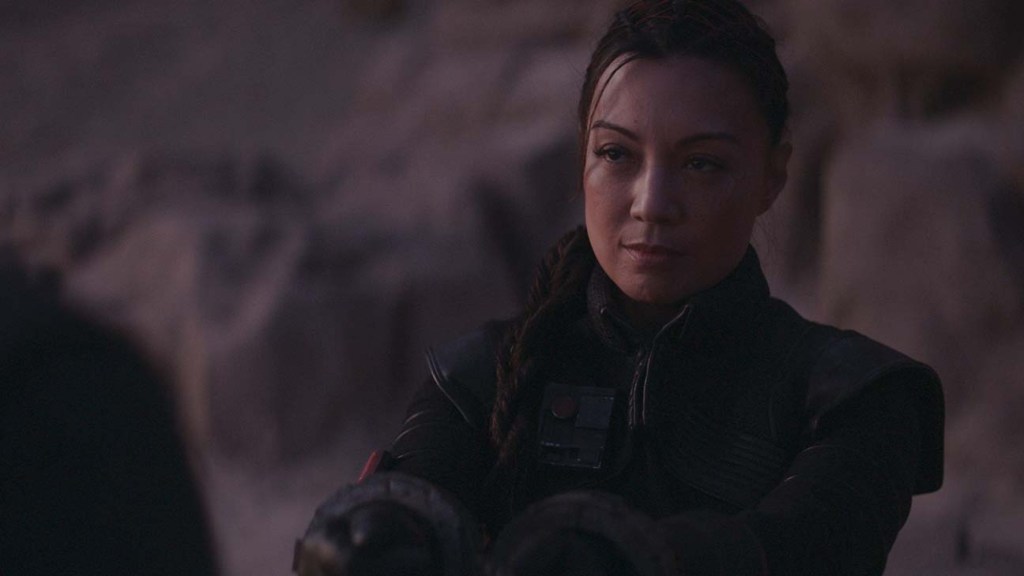 Fennec Shand and the Stranger

As discussed a few episodes back, The Mandalorian is building up quite the rogues gallery. Most exciting among these foes may be that stranger on Tatooine with spurs on his boots, whom fans suspect is none other than the great Mandalorian pretender and famed bounty hunter Boba Fett. Shand (Ming-Na Wen) definitely has unfinished business with the Mandalorian, and the episode that introduced her and the stranger was written and directed by Dave Filoni, known for playing the long game and honoring deep continuity in his animated series The Clone Wars and Rebels. While showrunner Jon Favreau has remained coy about Fett showing up, it seems like only a matter of time until the two armored bounty hunters face off. The question is, when Boba Fett does make his presence known, will he be played by Temuera Morrison, who portrayed Jango Fett and the Clone Troopers in the prequels, or will Fett have changed his appearance to cut ties with his cloned nature and be played by another famous face?

While Boba Fett certainly seems like a plausible threat in waiting, the more immediate concern is Moff Gideon. Esposito got to return to the sinister side he plays so well, most famously in Breaking Bad, in the season finale. He brought not only an Imperial bloodlust to the character, but a smarmy pleasure in his own villainy. While Mando took down his Tie Fighter in the end of the episode, Gideon emerged from the wreckage with the Darksaber. This black-bladed lightsaber was created by Tarre Vizsla, the first Mandalorian to be inducted into the Jedi Order during the Old Republic.

The Darksaber was passed down through generations, until it landed in the hands of Pre Vizsla, during The Clone Wars. The leader of the Death Watch, a terrorist organization on Mandalore who rebelled against the pacifist ways that came to govern their planet, was eventually killed by Darth Maul who claimed the Darksaber as his own. In Star Wars: Rebels, the Darksaber came into possession of Mandalorian Rebel Sabine Wren, who later gave it to Bo-Katan Kryze, who used it to unite several Mandalorian clans in order to take on the Empire before the Battle of Yavin. Its whereabouts after that point are unknown, but Gideon likely had a hand in wiping out many of the Mandalorian clans and laying claim to the blade. The Darksaber has become Excalibur-esque in its symbol of power and ability to unite Mandalorians. Mando has a long road ahead of him, but I can’t imagine a scenario where he doesn’t eventually kill Gideon and lay claim to the sacred blade.

One of the many delights of the first season of The Mandalorian was the directorial talent that came on board. Dave Filoni, Rick Famuyiwa, Deborah Chow, Bryce Dallas Howard and Waititi all got to lend their voices to the series and further shape the Star Wars franchise. With the Skywalker Saga now concluded, it’s even more important that Lucasfilm broaden its list of potential directors to helm the next solo films and franchises. And given the high turnover rate of directors, The Mandalorian seems like the perfect proving ground for filmmakers to see how they fit in at Lucasfilm and determine what they can bring individually to the franchise.

Favreau has already said that he plans to direct at least one of the episodes in the second season. But who will join him is still up in the air. Chow will likely be busy helming all of the episodes of the Obi-Wan Kenobi series starring Ewan McGregor. But beyond the welcome possibility for Howard, Filoni and Famuyiwa to each return, fans surely already have a wish list of who they’d like to see tackle the Mandalorian’s continuing adventures. Ava DuVernay, Rian Johnson, Robert Rodriguez, J.A. Bayona, Jodie Foster, Chad Stahelski, Brie Larson and Ana Lily Amirpour are all filmmakers I’d personally love to see tackle episodes in the second season. Each of those filmmakers has a distinct voice, and a treasure trove of influences, that would serve the series well as the galaxy continues to expand.

That’s a wrap on the first season of The Mandalorian. While Disney+ has yet to announce an official return date for season two, the future looks promising for the history-making, first live-action Star Wars series.

Should Disney Enlist George Lucas for the Next Star Wars Stories?

'The Mandalorian': What That Final Shot Means