Don’t let the Texas accent fool you — Margo Martindale has lived on the Upper West Side of Manhattan since 1974. So when it came time to step into her role as congresswoman and activist Bella Abzug in FX on Hulu’s miniseries Mrs. America, about the movement to pass the Equal Rights Amendment in the 1970s, Martindale had plenty of experience.

“I was in the heat of it” as a 20-something in New York City (by way of Texas, the University of Michigan and Harvard), Martindale tells The Hollywood Reporter. But as a single-minded, ambitious young woman, her one focus in life at that time was her pursuit of acting. “I should know more than I do,” she confesses.

That’s why, when Mrs. America came along, “it was almost like going to school and learning a part of history that I only had glimpses of,” she says. “It’s just been fascinating, and it’s made me smarter, and it’s made me appreciate those women more than I ever can tell you. They were warriors before warriors, you know what I mean? They built the fight — the fight that’s not over, and the fight that started with such passion. We’ve got to finish it with passion.” 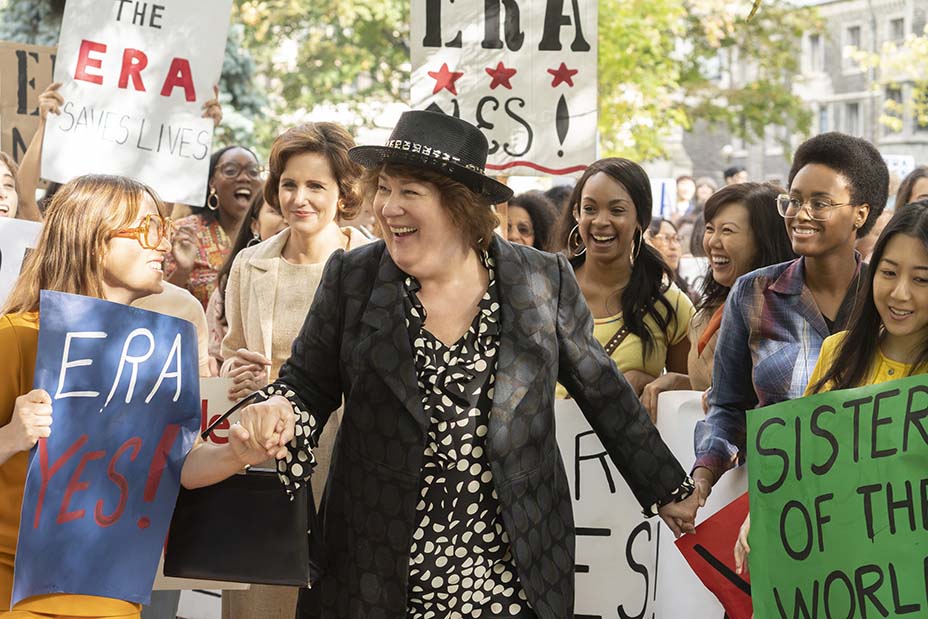 Abzug served the Upper West Side and the Bronx for multiple terms in Congress, but left the House of Representatives in 1976 to run for a Senate seat. Unfortunately, she lost the race. The seventh episode of Mrs. America, “Bella,” sees Abzug upset following her loss — but the prospect of organizing the 1977 National Women’s Conference gives her a renewed purpose.

Below, Martindale discusses what she learned from Abzug as well as creator and showrunner Dahvi Waller and how often she speaks to her fellow co-stars — which include Cate Blanchett, Elizabeth Banks, Rose Byrne, Uzo Aduba, Sarah Paulson and many, many more.

Uzo Aduba on 'Mrs. America': "These Are Real Women, and It Was a Real Fight"

It has been very memorable to watch these women fighting to pass legislation that people are still looking to pass today, 40 years later.

I know, it’s shocking. I watched so much history in YouTubes [videos] and speeches and documentaries about the time that the fire that is underneath those women seems more way more alive and way more vocal and way more fearless than today. And that’s the part that you go, “What happened?” It was an absolute dream job, honestly. Hard and fascinating and just full of a world that we all need to know about.

When you’re playing someone with such iconic fashion — Bella always wore her trademark hats — and distinct mannerisms, how do you approach it without turning into a caricature?

When I jumped into this world — in books and accents and clips and as much info as I could get — by the time we started it had been sitting in my body long enough. I almost felt like I had loaded up the stuff to begin to breathe as a real person. I mean that sounds malarkey, but it’s not, really. It’s exactly true. And the deeper and the more into the show [we got], the more like Bella I felt. It was an incredible process. I looked at mannerisms and I looked at placement of voice. I looked at thought processes and background on what kind of family she came from and background on what kind of child she was. So I came with a history of her that I’d built up with it. 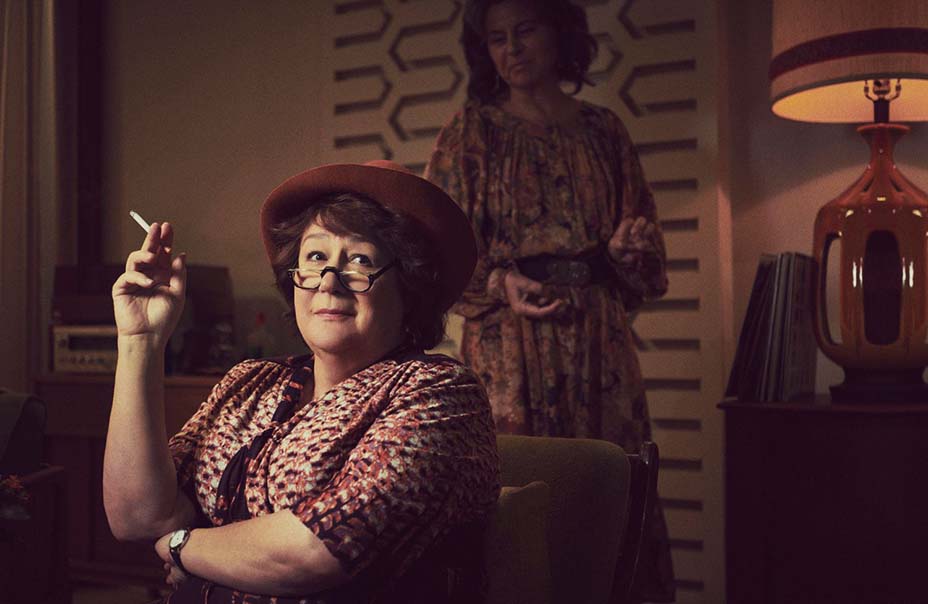 At the time this episode begins, Bella’s just lost her Senate race. What was her headspace like at that moment in time?

Really defeated, very upset by all of that. But with a little door being opened, it lit her flame right back up, that the girls asked her to head that [conference] up. I remember the episode when I looked at everybody in the room and I said, “I feel like I just became Bella right here today.” It might have been two, three or four, but I think it was three. We’re sitting in Gloria’s office at Ms. and I’m smoking a cigarette. I don’t know what happened, but it was like everything about it all just came alive for me. Acting’s a weird process, but I know when the moment happened because I acknowledged it. As far as episode seven, I haven’t seen it in a while. I’m waiting to see it on the big screen because all I’ve seen it on is my computer — or my husband’s computer, because I don’t have one. I have an iPad. I remember that I was pleased with it. That’s all I can say.

What did you learn from Bella that people who are feeling politically defeated at the moment can learn from her?

What I learned from her and learned about politics from her is that she was the ultimate politician. Because she had to let go of things she was incredibly passionate about to focus on the thing that she thought was the most important. And it might not have been her passion, but the ERA was clearly the most important. Gay rights was her passion and, you know, she had to put some things on the back burner in order to get one thing done. And I think that it’s very interesting to me, the right side and the left side. The right side is very organized and very single-minded. The [left] side is all about “everybody has a voice.” Well, sometimes when everybody has a voice, you can’t hear one. And I found that incredibly interesting to learn and for the Democrats, think about that.

Tracey Ullman's Fight for 'Mrs. America': "I Was the Last Person Cast"

Bella’s interactions with Shirley Chisholm have been fascinating to watch, particularly since they were both colleagues representing New York City in the House.

Of all the women who influenced me the most, Shirley Chisholm was the one. I loved Shirley Chisholm. To see that she was so soft-spoken within her group was fascinating to me. I believe Bella really loved and appreciated Shirley, and the fact that Shirley really didn’t play by the rules was just incredibly disappointing to her. But she realized that she let Shirley down. She did apologize. And they worked together again on something, and that made me happy. 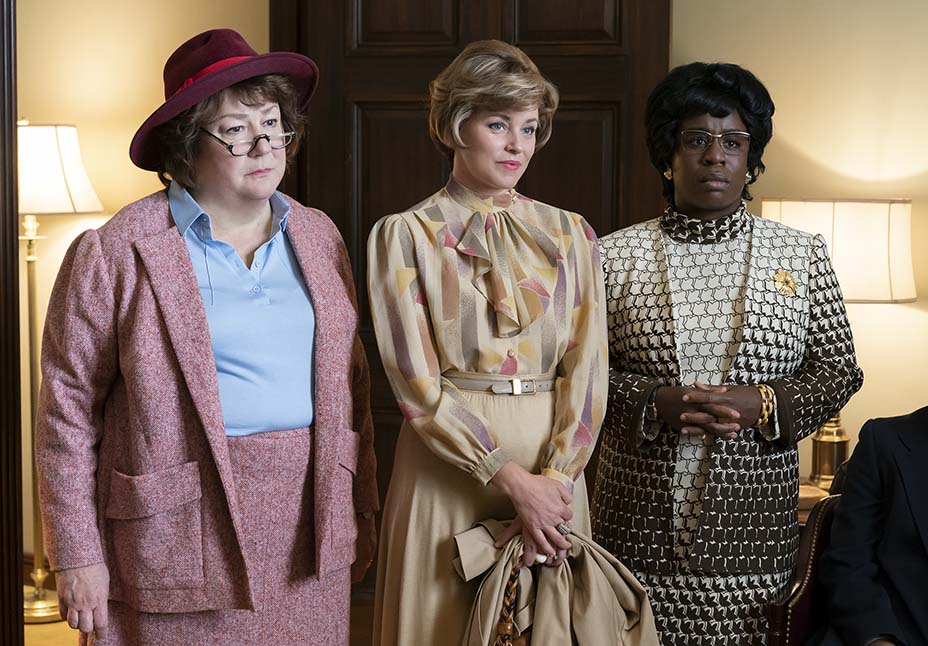 It seems like the cast bonded while filming in Toronto.

This is a group of women that will stay my friends forever, and I haven’t had that experience in a long time. I’m 68 years old. To have a whole new world of friends is an incredible feeling, and you don’t usually get that type of show. I did get it — I’ve gotten it from lots of things — but this particular group, we’re a very, very tight group. I love every one of them. And we’re in touch almost daily.

As someone who experienced the push for the ERA as a young woman, what was it like to revisit it as an adult?

[I was] ignorant and uninformed. The reason I was like that is because I was single-minded in my pursuit of theater and acting. That’s all I wanted — it’s what I’ve done since I was 16 and I really didn’t see much. My world was as narrow as that. There’s something good in that, and something like, “How could you be so ignorant?” But I learned. I’m not ignorant anymore. 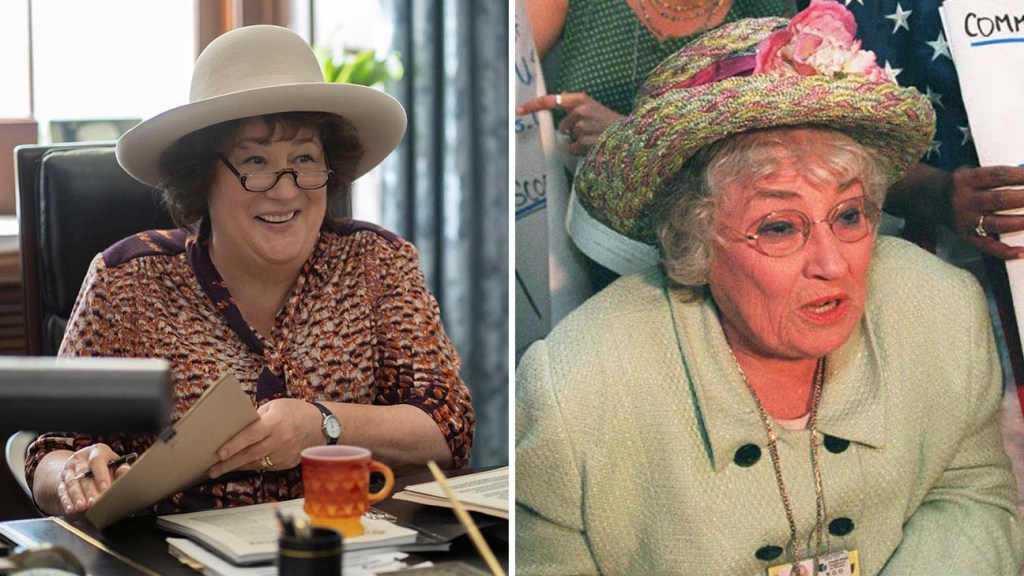 This interview has been edited for length and clarity. New episodes of Mrs. America are released Wednesdays on FX on Hulu.