Mariah Carey is perched on a sofa at the center of what is best described as a very Mariah Carey scene.

Over both shoulders are lush Christmas trees immaculately dusted with snow and decorated with oversized silver and blush-colored ornaments. A butterfly-shaped bauble rests above a stack of gift boxes wrapped to match Carey’s ensemble of the moment, a long-sleeved glittering silver gown paired with honey blonde mermaid hair that is cascading down her shoulders.

Though Christmas is still a few weeks away, the superstar is in a merry mood to promote Mariah Carey’s Magical Christmas Special, the Apple TV+  event that debuts Dec. 4. “Are we festive?” she asks The Hollywood Reporter during the virtual junket, happening during the very late hours of a Wednesday night in mid-November.

Festive? Definitely, as is her latest holiday offering: It features Ariana Grande, Jennifer Hudson, Billy Eichner, Snoop Dogg, Jermaine Dupri and narrator Tiffany Haddish along with cameos by Carey’s nine-year-old twins, Moroccan and Monroe. The plot goes something like this: “Faced with a holiday cheer crisis, the North Pole knows there’s only one person who can save the day: Santa’s great friend, Mariah Carey.”

The special also introduces interpretations of her holiday classics on a new soundtrack, an album that arrives a little more than 25 years after the one that cemented her status as a Christmas icon by launching the blockbuster classic “All I Want for Christmas Is You.” Last year, it became her 19th No. 1 hit by topping the Billboard charts a quarter-century after its initial release, and could repeat that feat this year: it’s already No. 1 on Billboard’s Holiday chart.

The music chart is not the only one where Carey has found success of late: a few weeks ago, her memoir, The Meaning of Mariah Carey, debuted atop The New York Times list of non-fiction bestsellers. On that note …

May I call you the Queen of Christmas or New York Times best-selling author …?

I think we have to go with the best-selling … well, I don’t know. Do I have to choose? Come on. Why are we choosing? It’s a year of not having to choose! [Laughs]

You deserve both. I wanted to give you a shout out about the New York Times distinction because the book has been so well-received. I know it was not easy for you to put yourself out there in that way. How are you feeling now?

Wow, it’s a huge thing. It’s been such a layered and complex life. It’s also a relief because I’ve been wanting a forum to actually talk about a lot of these things, but really, you know, a 15-minute interview, we’re not getting into the details from preschool when I was four years old. But I could do that in a book, and that is where it’s been rewarding. Also, being able to weave in Christmas … shows that there have been ups and downs with it. There’s been this constant battle to just let it be fun. Can you let it be fun? Can they not try and foil us, Chris? Why does this happen?

They’ve been trying to foil you! But you seem to always arrive right on time. This year, it seems like you and your music are needed more than ever. Did you feel any extra pressure when you were putting together the elements for this special?

You know, towards the end. The filming was very much about having a limited number of people there and [constant] COVID testing, the whole thing. It was a challenge to get through all of that, but I am just thankful that it happened this year because obviously I can’t do my Christmas live shows. I always want to do something big for the holidays and [the special] is an opportunity to do that. I’m so glad it came to fruition because we were able to push through it all and really focus on making it fun. 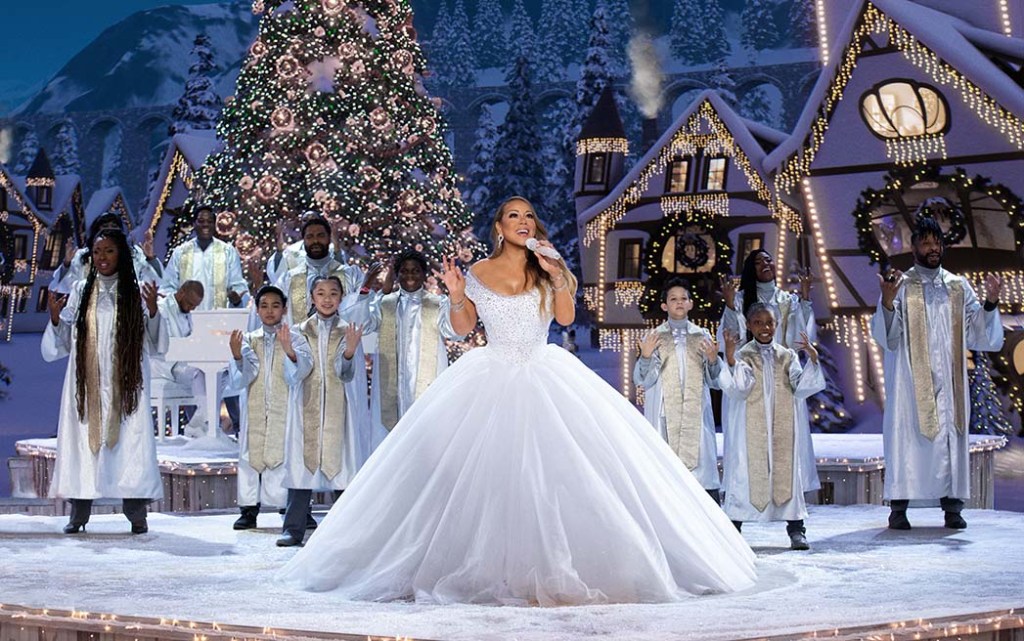 What was most important to you in terms of a vision for the special?

Most important for me was that the spirit of Christmas came through, whatever that means to you, personally, or to the viewer. I know that for me, there’s a certain spirit that happens during that time of year. I was even thinking about it the other day, sitting around wondering why is it different for me when I look at Christmas decorations or decorate? But it is. There’s just a different feeling that I get. It’s like an actual, tangible feeling that comes over me that I just want everybody to feel this happy. I know everybody can’t, but I wish that everybody could have the mindset of let’s really make it through. Let’s be unstoppable and power through this. It really comes from a place of love and healing.

Can you talk about how you selected the songs and what people should expect from the new “interpretations”?

There is new material on this one as well. I redid “Sleigh Ride,” which I love. I wasn’t even thinking about doing it. I did a little version of it with “Hark the Herald Angels Sing,” but just for a moment because that’s how I usually start my Christmas shows. When it was hopeful, we’d start with an upbeat song and it’s kind of became my new favorite. Well, not my new favorite favorite, but it’s up there.

Obviously, the collab that has everyone talking is with Ariana Grande and Jennifer Hudson. What was it like to work with them?

It was a really great experience. Everybody was so excited. I thought that “Oh, Santa” would be a good choice because initially when I wrote it with Jermaine Dupri and Brian Michael Cox, the whole intention was for it to feel like a girl’s group song. I just did that on my own and layered the vocals the way that I did. This was a chance to revisit it with these incredible women in mind by really going into that whole girl group kind of vibe.

What was it like to hear your lyrics sung by Ariana and Jennifer?

It’s a song I had already written and I just felt like it didn’t ever really get the shine that it could have gotten. So, this was an amazing opportunity for the song. I think we brought some magic to it.

You also worked with Tiffany Haddish, Billy Eichner and a long list of special guests. Any memorable moments on set?

I live for the fact that Tiffany is the narrator. She and I had our own FaceTime moments. Again, people are not really congregating so all of her things were filmed separately from mine. Billy and I were in scenes together. I live for him. We had the best time. I’m so glad he did this. I don’t know if you know about my little alt-rock album, but he and I were having little obsessive moments about it, like we need a listening [event] for that. It’s in the book. I’m not going to get into it now but I’m glad that he was enthusiastic about that while being festive. He’s a great addition to this. Also, Misty Copeland dancing as the Sugar Plum Fairy. She’s been someone that has become a real presence in my life. We have a lot in common and she’s made history. I’m so proud of her accomplishments.

What were the conversations like with Roc and Roe about their appearance? Did they have a say in what they wanted to do?

Mainly our discussions were related to their ensembles. Roe and I sort of discussed what — she’s 9 years old, so it is what it is — but we discussed her secret number that she wears at the end. It’s a big skirt and luckily, she’s still into that. And then, she wears a casual number. We did some pajamas for Rocky’s outfit. He had to approve it. Like, I gave them the same type of control that I would want to have, you know. I thought they looked great and we had so much fun. It’s great because Mykal-Michelle Harris is actually their friend in real life. She’s kind of like our little Mariah character and we follow her journey as she enjoys Christmas, even in the worst year in probably all of our lives. 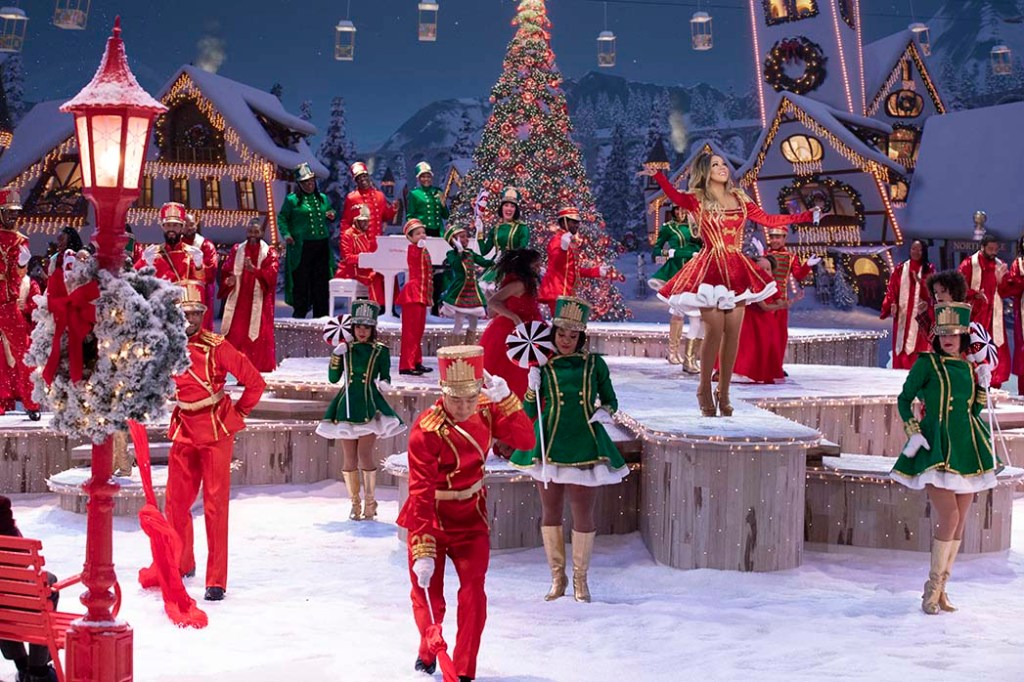 You once directed a holiday movie [2015’s A Christmas Melody for Hallmark]. Did you ever consider directing this? How did you settle on Roman Coppola?

Everybody loved Roman and he was great. He wanted to bring out a very subtle quality as well as all the over the top stuff, just in terms of the presentation of the scenes. He was a really fun person to work with. We also worked with [Hamish Hamilton and Done+Dusted]. There was a lot of creative input. The thing that’s hard for me as a producer and as someone who fancies themselves as a director, it’s always good when you have the right budget. So, we always look forward to that. On this special, I would not have taken on that responsibility [as a director]. Thank God I didn’t because it’s so important to me and I really wanted input. I’m picky as a producer. I will say, “the Christmas balls are going to have to be a bit shinier.” I’m down to every detail. I really care about it all. So that was hard. It was hard to give up that control.

What has Apple TV+ been like as a partner?

They’ve been the best partners I’ve ever worked with, in terms of everybody’s attention to detail and thinking outside the box. As possibly the world’s biggest entity, you know their attention to detail really makes a difference. For me to have a creative partner like that is huge. Really from the first meeting, I knew that they were the right place for this magical Mariah Carey’s Magical Christmas Special to live and become a thing. I’ve enjoyed them so much.

How about some festive, holiday-related questions for the final minute we have left? It will be quick-hit holiday questions. … Hot chocolate or eggnog?

Hot chocolate, but I don’t know how many of these things I’m going to give away. [Laughs]

Can’t choose between them!

Christmas night for me. I let everybody else do what they’re doing, and then I like to start making some food, take a nap and then I’ll open mine. I’d rather just open mine after everybody’s done theirs so I can actually take it in and be excited about it.

Everybody always asks me that, there really is no answer except Roc and Roe.

Last question: What’s your Christmas wish for all the land?

I love how you phrased that. My Christmas wish is to get past the moment that we’re having in this world and the way we all feel. I would love for us to be united.

Heidi Klum on Why Snoop Dogg Was First Choice for Debut Single: "I'm a Huge Fan"

"There Is a Panic About Sex Now": John Cameron Mitchell on How Culture Has Shifted Since Release of Explicit 'Shortbus'