[This story contains spoilers from the season two finale of Amazon’s The Marvelous Mrs. Maisel.]

It’s perhaps unsurprising, given the premise of The Marvelous Mrs. Maisel, that the most contentious part of Amazon’s generally beloved show has become Mr. Maisel. Joel Maisel (Michael Zegen) was introduced in the pilot as a mediocre man weighing down an exceptional woman; a cheating slacker who took Rachel Brosnahan’s Midge for granted, passed off her comedic talent as his own, cheated on her for months with his secretary, then dumped her with no warning.

But as the show chronicled Midge finding her voice and becoming empowered in her newly single, striving life as a stand-up comedian, Joel stuck around, sought redemption and even rekindled things with his ex-wife on more than one occasion. Despite introducing a charismatic new love interest in Zachary Levi’s Benjamin, season two kept Joel and Midge firmly in one another’s orbits, and ended with a startling reunion — initiated by Midge. Having made the decision to embark on a potentially career-making six-month tour, Midge tells Joel, “Just for tonight, I really need to be with someone who loves me.” The subsequent fade-to-black on a kiss was either a thrilling romantic climax or a frustrating regression, depending on who you ask, and leaves things more unresolved than ever heading into season three.

“Maisel was billed as a show about a woman who’s rising above her cheating husband,” Zegen tells The Hollywood Reporter. “Now, [creators] Amy Sherman-Palladino and Dan Palladino are sort of writing against that. Where before they made Joel the enemy, now they want the audience to sympathize with him, and I think that’s confusing for a lot of people.”

Below, Zegen talks with THR about the polarized audience reaction to Joel, why he’s not expecting Midge and Joel to end up together and what that finale cliffhanger really means.

The season two finale’s surprise ending, in which Midge goes to spend the night with Joel, has been polarizing. How did you feel about that scene?

Rachel found out what was going to happen, and she tried to tell me but I didn’t want to know. I never want to know what happens [ahead of time]. When I finally got the script for the episode, Joel’s in the first quarter, it’s established that he’s going to start a club, and then he vanishes. I’m reading through like, “What was Rachel talking about?” I get to the end of the script, there’s one page left so I’m thinking they must have cut whatever she was talking about. And then … that! I was in shock, but really liked it. I know that a lot of people were like, “What?!” but I dug it, because I’m rooting for those two. 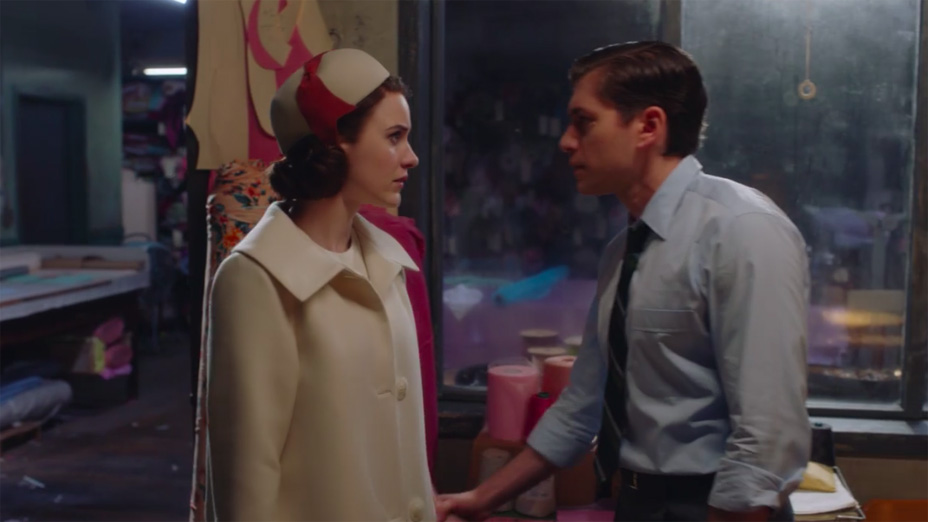 Midge comes to Joel because she wants to be with someone who loves her, despite her engagement to Benjamin. Does this mean they’re getting back together?

It doesn’t feel like that to me. She even says, “Just this one night.” A lot of people had their own interpretation of it, but for her it’s like this one final goodbye to her old life before she’s alone forever, and Joel … he’s her guy. There’s this unconditional love between them, and they have kids, and so I think it’s this moment of comfort before she takes this next big step in her journey. Somebody said to me, “Why didn’t she go to Benjamin? He loves her!” But that would be cruel, because obviously she knows she doesn’t want to end up with him. I’m glad it ended the way it did. But are there going to be repercussions next season? In these types of scenarios, there usually are, so it’s going to be really exciting to see. I trust Amy and Dan, because they have five seasons planned out, so we shall see!

What do you think is going through Joel’s head in that moment?

Well it’s funny, because when we shot it, there was a moment where she tells Joel the situation and what she wants, and there was definitely more than a beat of him thinking, “Do I want to do this? Do I want to suffer this pain again?” But they cut all that out and just had me going for it! And then there was more making out, which also got cut. I think it works so perfectly the way it is.

Joel was written as so much more of a villain in the pilot than he is in the rest of the show. Did that feel like a major shift to you?

He has definitely evolved, and it’s fascinating to me that they would take this character who is so polarizing [and try to redeem him]. … Maisel was billed as a show about a woman who’s rising above her cheating husband, and now Amy and Dan are writing against that. Where before they made Joel the enemy, now they want the audience to sympathize with him, and I think that’s confusing for a lot of people. But it’s something that I find incredibly fascinating, especially because I get to play this character. This could have been somebody they just tossed after the first episode, and they didn’t. And on the one hand, you have all these people writing negative things about Joel, and at the same time, I get like three marriage proposals a day! So I don’t know what to think!

Midge and Joel keep breaking things off and then going back to one another. This season Joel explicitly says, “It’s time for us to dance with other people,” which lasted about four episodes. Does it feel like they’re stuck in a cycle to you?

Yes, but that’s life! They do share these kids together, so they’re never going to be out of each other’s lives, and there is this love that they have, and a lot of backstory that you haven’t even seen. There’s always going to be this comfort between them, and I am really curious to see where it goes from here. I feel like this isn’t the end, necessarily. I don’t think that that’s really the last time; I think they’re going be going through all kinds of different cycles of love, and hate, and arguments and that’s just life — especially when you have kids together, and there’s that nostalgia factor, it’s hard to escape each other. 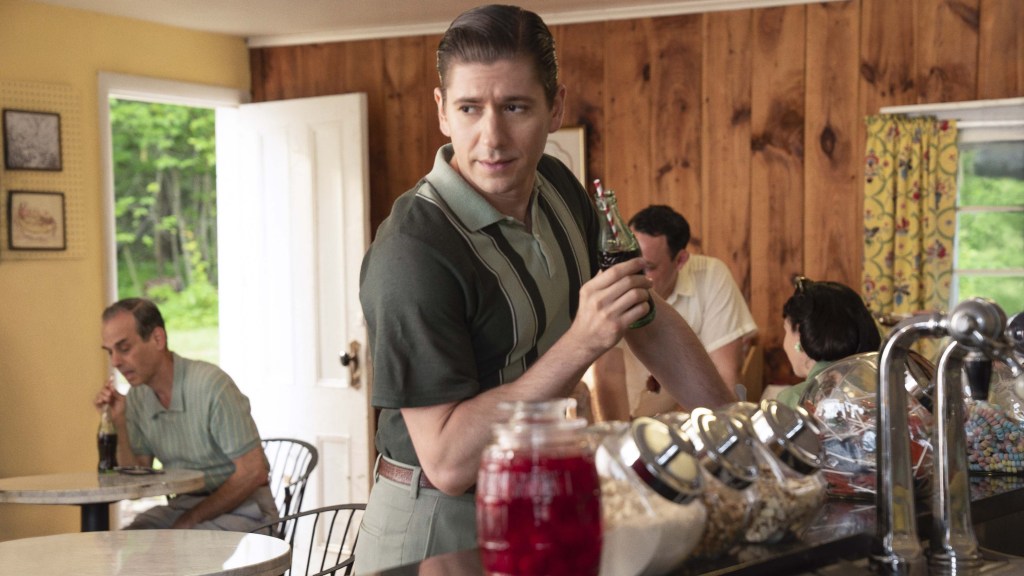 What does Joel mean this season when he complains that he “wants to be forgiven”? Midge does seem to have forgiven him, her family is pretty nice to him, they’re in each other’s lives …

It’s guilt. He fucked up, and essentially, he’s the catalyst for everything that’s happened. He could have lived a really good life and had her as this perfect housewife who doted on him constantly, and he blew it all up. And he blames himself for it. Obviously, she has this amazing career and he knows that, but he can’t be with her, because his ego can’t take it. It’s completely emasculating, the fact that she’s up there talking about him. If they were to be together she would talk about him, and he knows that she has to talk about him because that’s what stand-up comedians do, and he can’t take that.

Now that Joel has this new ambition to open a club, could his feelings change? If he figures out his own career path, could his ego evolve to the point where he’s OK with Midge doing stand-up?

He’s OK with her doing stand-up, but he can’t stand the fact that she would be talking about him, and also she’s succeeding in the career that was his dream. That alone is emasculating. But him running a club would be something that would make him happy. He’s tried stand-up, that didn’t work; he tried the plastics company, that wasn’t really his thing either; so here’s something that could be really cool for him and be this driving force to give him some sense of purpose. And hopefully, yes, he’ll be more OK with her succeeding as a stand-up comedian.

Did you enjoy getting to play a hero moment when Joel punches that club owner in the face?

That was nice, but I never asked for any sort of redemption for him. At the end of the last season [when Joel beats up Midge’s heckler] I thought that that was enough. I didn’t think they needed to do any more. Don’t get me wrong, I’m completely fine with him punching out this club owner, too, but I thought that was such a perfect moment, and it was so unexpected. During that finale, I thought he was going to get up on stage and totally ruin her set. I’m reading the script like, “Oh no, Joel, what are you going to do?” But then he has this heroic moment that completely redeemed him for that whole season. Up until then, people just hated Joel, and then at the end they’re like, “Wait, maybe I don’t hate him as much as I thought.”

One other big talking point from season two: Are Midge and Joel bad parents?

Yes, they’re bad parents! I guess it is a circumstance of the era, because they did get married very young and they had kids very young, and I don’t think either of them were ready for that. But this season especially Amy and Dan doubled down. It’s tough working with child actors, especially when they’re babies. You don’t have a lot of time with them, and they cry a lot, and so it’s tough. Even with Nunzio and Matteo, who play Ethan, they’re so great and so well behaved, and we couldn’t have asked for a better set of twins to play Ethan. But a lot of times they don’t really want to be there, they want to be out playing, and rightly so because they’re kids! So, I think it’s a combination of a few things: the time period, these characters, but also the logistics of it.

Do you think Midge and Joel will ever give their marriage a real second chance?

I think they could try again, but I just don’t know if they were ever really right for each other. That’s just what it is. They tried, they’ve been together a while, and you see they have this passion for each other, but they’re both going in separate directions, and Midge’s career is really going to be taking off, so I just don’t know if it’s even possible any more, sadly enough.