The most striking episode of The Marvelous Mrs. Maisel’s third season ends on an uncharacteristically melancholic note for a show so buoyant.

In the final scene of episode five, Rachel Brosnahan’s Midge Maisel and Luke Kirby’s Lenny Bruce are taking a dawn walk along the Miami waterfront after spending a singular kind of night together. It’s a night that begins on the set of a fictional Playboy’s Penthouse-esque TV show called Miami After Dark, continues onto the sultry dance floor of a Cuban nightclub and ends on the threshold of Lenny’s hotel room, where the pair seem close to acting on their long-unacknowledged romantic chemistry.

At the last moment, Midge balks and takes a cab home instead. “Maybe someday,” Bruce calls after her. “Before I’m dead.” She agrees, but the moment is still raw — it’s 1960, and Bruce will be dead in six years.

“It looms large, because it’s the truth,” Kirby tells The Hollywood Reporter of Bruce’s real-life fate, acknowledging an underlying sadness in playing the role. “Not that the show leans into it, but it’s more just when I get to hang out with him and breathe with him that it’s hard not to feel it.” Kirby’s soulful performance has transformed a role that could have been a gimmick into an Emmy-winning fan favorite, and though much of his work on the show is overtly comedic, he says it was finding the character’s vulnerability that mattered most.

“There’s a quote of Lenny’s where he says, ‘There are never enough I Love Yous,’ which is just a beautiful sentiment,” he says. “The idea that there really is not enough to ever display the size and scope of your feelings. I always feel like there’s a very tender heart behind this dynamic mind.”

Kirby spoke to THR backstage at the Park Avenue Armory on Manhattan’s Upper East Side, where he’s starring in a revival of the 1937 play Judgment Day, an allegorical fable about guilt and culpability in Nazi Germany. He plays a tightly wound and rigid character that couldn’t be further from a boundary-pushing 1960s comic, but he shifts gears quickly after coming offstage to delve into the minutiae of Maisel’s new season.

Episode five felt special to film, in part because it is so unusually full of silence, he recalls, which was “initially a bit bracing and disarming.” Amy Sherman-Palladino, who wrote the episode, is renowned for breakneck-speed dialogue, but here there are vast pauses and and long, loaded gazes between Midge and Lenny’s words to each other. “Amy said ‘This is an opportunity you’re not going to get very often,’ because she and Dan [Palladino] are so adamant about pace, and pace is what makes their writing really come to life. This was the opposite.” 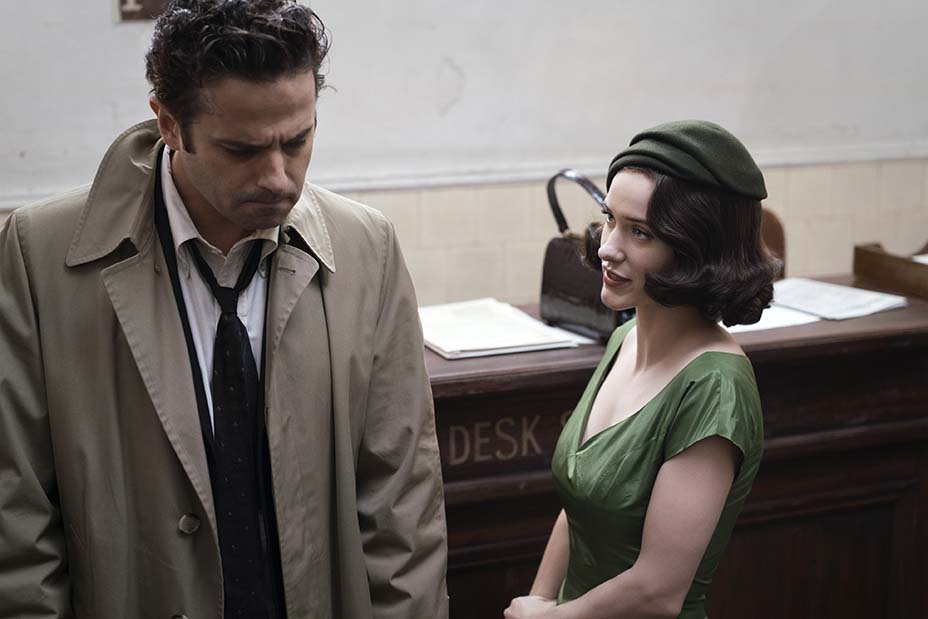 Kirby’s intense rehearsal schedule for Judgment Day has meant he’s had little time to gauge reactions to the new season, but he’s not surprised that Midge and Lenny’s still-unresolved attraction is a talking point. “The first time I heard the term ‘shipping’ was from Rachel, and I was like, wait, what? What is this language? It’s neat how it has evolved, because from the pilot I don’t think you’d know that was going to be a thing at all.”

From the pilot, in fact, it would be easy to assume that Lenny Bruce was a one-and-done cameo, as was the original plan — Sherman-Palladino has said it was Kirby’s charisma in the role that convinced her otherwise. “The shipping aspect is sort of tricky given what [he and Midge] have, which is this trust and this friendship,” Kirby continues. “They have a simpatico, and I don’t think that it’s always, ‘We should be together.’ It’s more like, ‘This is fun, let’s keep going with this.’ Episode five really does attest to that connection that they have, when Lenny pulls her on camera with him, and they’re able to just riff and play and be in their own little world.”

A full-fledged romance seems unlikely: in part because Brosnahan has all but ruled it out, in part because pairing a fictional character with a real person is tricky, but mostly because it’s hard to imagine the Marvelous Mrs. Maisel episode in which Midge’s boyfriend dies from a heroin overdose at 40. Will Bruce’s death be depicted in the show? “Who knows? But you can imagine it,” Kirby says. “The show has a good human muscle, I find. For something that is as light as it can be, it’s got anger and sex and humanity running through in a way that feels legitimate to me.”

Whatever future seasons hold for him, it was important to Kirby and everyone involved that Bruce be depicted with “vitality, and as a real human being, not just a legend.” But there is something otherworldly about the way he fits in, popping up here and there as a confidant to Midge, who never seems surprised to see him even in as far-flung a location as Miami.

“It’s like he’s a hallucination,” Kirby jokes. “If the writing were less good, they’d give her a brain aneurysm and reveal he was never real.” Instead, Kirby thinks of the character figuratively as “a fairy godmother, or a spirit guide. It really does make more sense to me to think of him in that way. He shows up and anchors things for a second, and then throws a smoke bomb and disappears into whatever ether he goes into.” 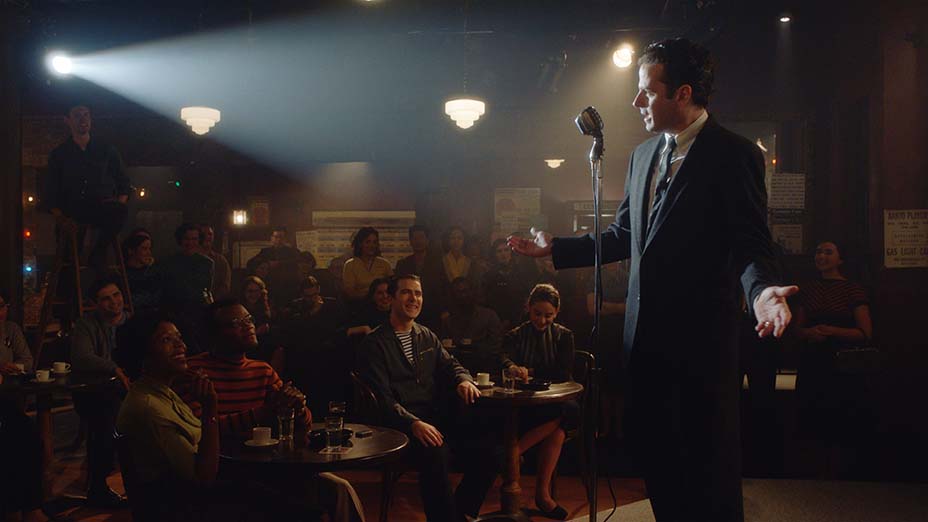 As loose as the show sometimes plays with historical fact, the Palladinos have always prioritized authenticity when it comes to depicting Bruce’s comedy. “Everything I’ve performed in a club [on the show] has been from the real Lenny, either from a recording or from his book,” Kirby explains, pointing to a scene from the season three premiere where Bruce is arrested midway through a mildly explicit stand-up set, during which he passionately skewers the hypocrisy of sexual censorship. “I really want the Supreme Court to stand up and tell me that fucking is dirty and no good,” Bruce demands, just as he’s dragged away in handcuffs and finds an unlikely defender in Midge’s straitlaced father, Abe (Tony Shalhoub). “The version that I do in that episode is from his book, How To Talk Dirty and Influence People, but he had a very similar bit that he would do live,” Kirby says.

The show’s timeline is still a few years away from the 1964 obscenity trial which saw Bruce sentenced to four months in jail (he would later be posthumously pardoned), but the season three arrest foreshadows his role as a martyr for the free speech cause. “There’s a horrible thing that can happen when a person’s public narrative, and their public cause, sort of takes over. I think Lenny had that a bit in his later years, where he was just pushed into always having to defend his position,” Kirby says. “I’ve listened to him so much, and I have such respect for him and what he was doing, and it is just brutal that he had to endure this much scrutiny from police and from the courts. The cruelty of it, that’s the real obscenity.”

Kirby is a remarkably forceful presence in Maisel despite minimal screen time; he’s appeared in a third of the show’s episodes, and estimates he’s shot for “maybe a total of twelve days over the course of three seasons.” Around the edges of those shoot days is a lot of prep time spent studying real footage of Bruce, inhabiting his physicality and voice and thought patterns. “They allow me a good chunk of time to be with the material before we shoot, because especially when it’s his live stuff, it’s initially very taxing. My mind is nowhere near as kicked-in rhythmically as his, so just listening to him at first, it’s like OK, try to keep up … nope, I can’t, I need a nap.” Kirby sees his infrequent appearances as “a great benefit to the character, technically speaking, to just sidle in and then leave them wanting more.” 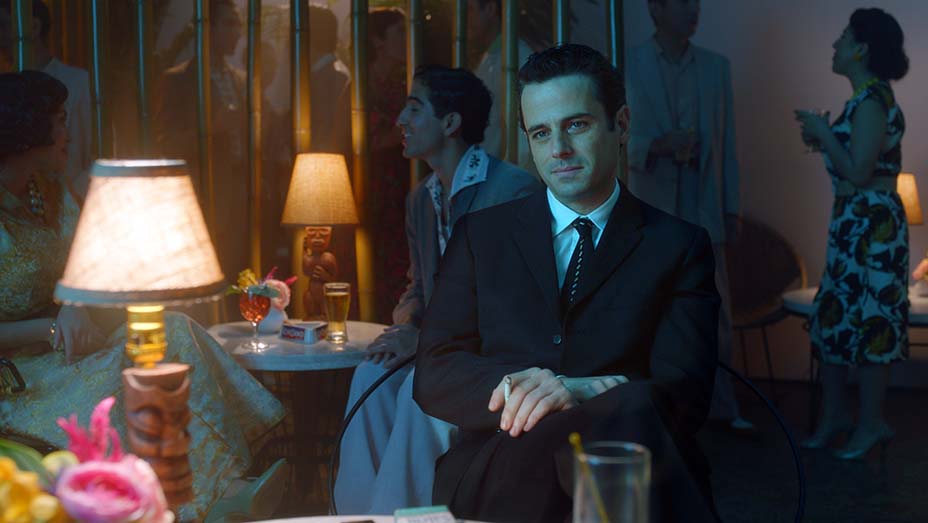 The most challenging and rewarding showcase for Kirby so far came in the season two finale, in which Bruce appears on The Steve Allen Show for a musical performance aimed at rehabilitating his professional image after a series of brushes with the law. The song, “All Alone,” casts Bruce as a man putting an unconvincing brave face on the breakdown of his marriage, telling his audience he’s thrilled to finally be free. His bombastic plans for a swinging bachelor lifestyle are undercut by the song’s forlorn, repeated title refrain (“I’ll be living in my Nob Hill mansion, rich … and all alone.”). The episode was Kirby’s Emmy submission, and it’s easy to see why he won; it’s both an uncanny recreation of Bruce’s actual 1959 performance, and a showcase for the bruised vulnerability that makes the character so irresistible to viewers.

“That was really special, because I had already been using that song as my own talisman during the first season,” Kirby says. “When I would come to work, that would be my hum, my meditation, because in my early research of Lenny I had found that song and been so surprised by it.”

The pathos of the performance ended up defining his approach to the character. “First of all the tune is pretty. It’s kind of an ear worm. It’s really funny. It’s so truthful to a relationship. And it’s devastating. What really struck me about that bit is that he loves fun, he loves playing, but there’s also something very emotional about humor to him, in that it can take you out of the monstrosity of life.”

How 'The Marvelous Mrs. Maisel' Blows Up Its World in Season 3