Skip to main content
December 7, 2019 9:00am
Logo text
[This story contains spoilers from season three of Amazon’s The Marvelous Mrs. Maisel.]
The third season of The Marvelous Mrs Maisel finds Rachel Brosnahan’s spirited Midge delving into uncharted waters in both her professional and personal life. Within the first few episodes, she’s embarked on her most high-profile and demanding gig to date (a nationwide tour as the opening act for pop star Shy Baldwin), moved all her worldly possessions out of her parents’ soon-to-be-vacant Manhattan apartment, and finalized her divorce from her husband Joel (Michael Zegen), which — spoiler — lasts all of two episodes.
Midge’s emotional life seems poised to get even more complicated as of episode five, which sees her reunite with comedian Lenny Bruce (Luke Kirby) during a tour stop in Florida. Midge and Lenny (who is the show’s most significant real-life figure) have shared an intense connection ever since the pilot episode of the series: He was one of the first people to spot her talent, and the possibility of romance has always lingered, thanks in no small part to Brosnahan and Kirby’s on-screen chemistry.
During their Florida rendezvous, the will-they-won’t-they dynamic seems to be hurtling toward a resolution: The pair share an intimate dance, stare wistfully into each other’s eyes in a darkened bar, and even make it all the way to the threshold of Lenny’s hotel room — until Midge says goodnight and leaves to take a cab back to her own hotel.
“I begged Amy [Sherman-Palladino] never to cross that line,” Brosnahan tells The Hollywood Reporter of the almost-romance. “And she agreed. … They like each other because they admire each other, they admire each other’s talent and they admire each other’s drive. And that is allowed to be all that it is.”
Brosnahan went on to discuss the latest twist in Midge’s never-ending on-off relationship with Joel, how season three depicts the loneliness of life on the road, and why she takes exception to critics who call Midge a bad mother.

How 'The Marvelous Mrs. Maisel' Blows Up Its World in Season 3

In episode two, Joel and Midge finally get divorced. Two episodes later, they end up married again, which just perfectly sums up their relationship to me.
Oh God, it does. Michael and I couldn’t believe it when we read the script, and at first, we were like “What? No! Why?” And then we kind of fell in love with it because it’s so real. They are each other’s person, and they’ll always be that, and it’s just messy and confusing and it makes no sense at all, and yet somehow it makes perfect sense that they end up accidentally remarried and now need to get divorced again. It just adds another chapter to their already very complicated story.
They seem to be more at ease with each other once they’ve divorced, especially in the Vegas scenes. Did it feel that way to you?
Definitely. Vegas in itself is a brand-new experience for Midge. She’s playing bigger houses for new audiences from different parts of the country, and she’s having to learn how to adapt her material, and when she’s successful, the first person she wants to celebrate that with is Joel. There’s some kind of tension that gets released when they finally get divorced — there’s been all this anticipation leading up to that moment and then they finally do it, and it’s just done. I don’t think they quite know what to do with that feeling, but they both seem to still want to hang out, and then one thing leads to another. 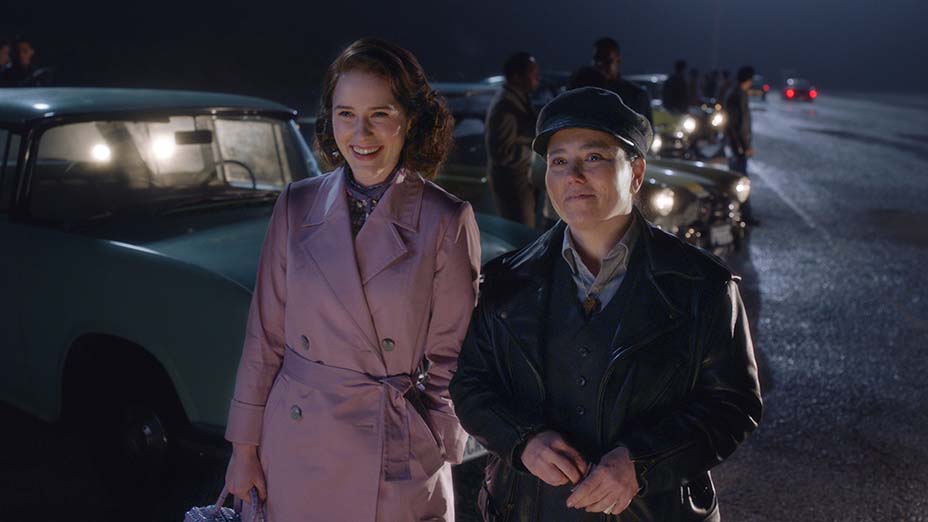 After season two, there was a lot of commentary on the show saying that Midge and Joel are bad parents, and that Midge in particular is never with the kids. That idea is addressed directly in season three. Was that satisfying to you, to have it brought up on screen?
I think it being brought up seems more like a natural evolution of Midge’s journey rather than something that’s in response to a criticism. Amy and Dan [Palladino] have had a plan for the show, at least an outline of a plan, from the very beginning. They talked me through a three-season arc when we shot the pilot, and so it seems to me, within the arc of the story that they had planned out, that as Midge’s life continues more on the road, and she continues to move further into one of her worlds, that she will be moving further and further outside of the other one. Trying to juggle them becomes more and more of a challenge, and I think that’s what you’re seeing this season. Midge is a working comic, and that means Joel has to become a more involved dad, but that’s not that socially acceptable at that time, and that’s challenging for both of them. She’s missing key moments in her kids’ lives, in Joel’s life, in her parents’ lives, and being on the road is lonely. She’s doing it for an extended period of time, and that’s hard.
Do you think the criticism in itself was fair?
Listen, I don’t think that Midge and Joel are the world’s greatest parents! But parenting is hard, and I also think it’s odd, some of the ways in which their parenting has been framed. I’ve had people ask if I think that Midge loves her children. I’ve had people lead interviews by saying “Well, God, she’s a terrible mother!” And I just want to say, why do you think that? Because, OK, Midge doesn’t have the healthiest body image, and that’s probably something she’s passing on to her young daughter, and that’s not ideal. But the kids have two parents who are involved in their lives, who are making an effort to remain involved in their lives even though they’re both working and even though they’ve split up, they have four loving and very involved grandparents, they have a Zelda, they have neighbors who often watch them — a village is raising these kids! And I’m not sure what about that equates to bad parenting. You don’t see the kids all the time on the show because the show isn’t about Midge as a mother, it’s about Midge as a comic, and pursuing this dream.
There’s a sense that maybe some viewers are uncomfortable with seeing a mother who isn’t defined by being a mother.
I think you hit the nail on the head. It seems to make people uncomfortable, or they feel like it’s a plot hole rather than something that was very carefully thought out. It seems odd [to them] that someone who is a mother, that their story might not center around their relationship to their children, and that’s just not what we have here. When that journalist asked about whether Midge loves her children, Alex [Borstein] very astutely said, “I’m away from my children working right now. Would you ask me if I love them?”
Speaking of criticism of Midge, Abe [Tony Shalhoub] is pretty tough on her this season, basically accusing her of being a quitter who doesn’t stick with anything and suggesting she’ll quit comedy too. Do you think that’s true?
No, I don’t think it’s a fair characterization, but it feels like a very parental one! I wouldn’t consider Midge a quitter. In my mind she’s always been the opposite of that. She’s someone who doesn’t know how to do anything at less than 150 percent. She says in the opening scene of the series that she found her signature haircut at 12 or something, and at 13 she knew she was going to go to Bryn Mawr. She had a very clear path for herself. But with that being said, she was a bit wishy-washy with comedy last season. It wasn’t exactly what she hoped it would be at times, and I think Susie and maybe even Midge for a moment questioned whether or not they would continue down this path. But now she’s decided, beyond a shadow of a doubt at the end of last season, that she’s 100 percent committed, no matter the cost. I think it’s important to her in that moment, when she says “Never,” to let Abe know that. 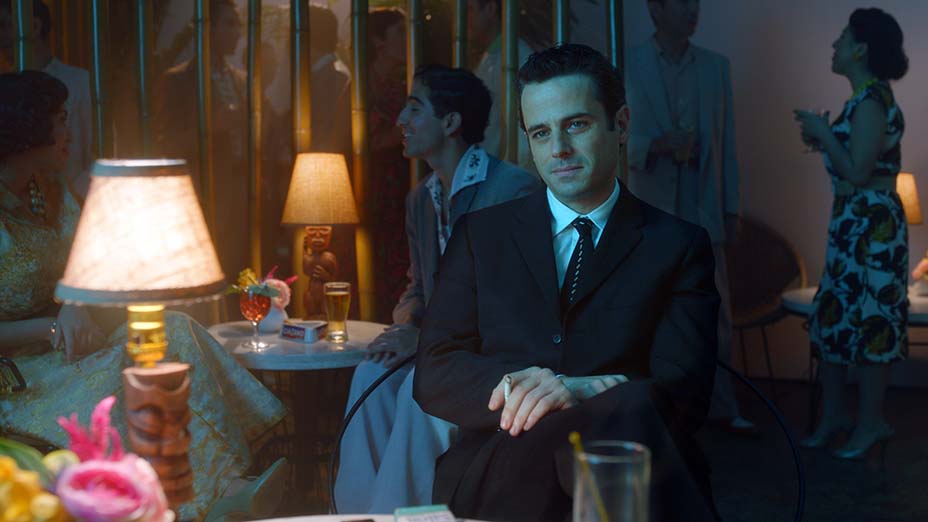 Midge and Lenny Bruce come very close to hooking up in episode five, which feels like something viewers have been wondering about since season one. How do you feel about their dynamic?
I begged Amy to never, ever cross that line, and she agreed. I think that their friendship is so important to both of them, but especially to Midge, and it’s an intimate friendship, unlike a lot of the ones I’ve seen between men and women on television. They like each other because they admire each other, they admire each other’s talent and they admire each other’s drive. And that is allowed to be all that it is, you know? And I love it, and I don’t want to risk it for anything, but I appreciate that they walk right up to the line. Amy and I were in complete agreement about that. For me it was about wanting to let their friendship be their friendship, as dynamic and wonderful and weird as it is. I love it exactly as it is, and I don’t need more from it, and I think Midge feels the same way.
Is that what’s going through Midge’s mind when she decides to leave?
Yeah, I think they both know that they’re on the road, it’s lonely, they’re lonely, and they like spending time together, and they have fun together. And it would probably be fun, but I don’t think either of them is interested in a forever thing. Midge has decided that’s not the direction her life is going in, so is it really worth risking the friendship they have for one night that might not live up to everything they hoped it would?
Midge has this unwavering optimism and resilience that very rarely gets dented, even when things around her are falling apart. Do you ever find yourself tapping into her energy in your own life?
I think I tap into Midge when I get nervous! I can hear myself starting to fall into some rhythms and cadences and trying to will her confidence into my own life, and she’s kind of become like a weird alter ego. I do admire her unwavering optimism and that she leads with joy. I also think Midge is a character for whom everything is new, all the time — every new club she plays, every new city she travels to, every new character she meets, it’s all new, all the time, and it’s nice to be able to just be in the moment with her.
This interview has been edited and condensed for clarity.